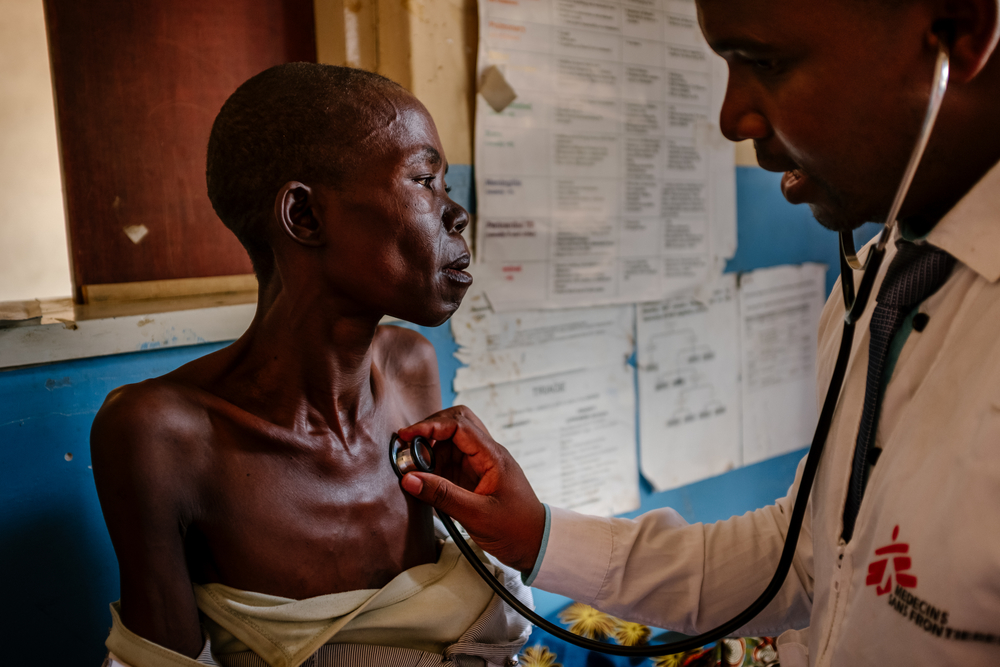 Hundreds of thousands of people continue to die from advanced HIV, also known as AIDS, because countries are still ill-equipped to detect and treat people suffering through advanced stages of the disease, according to a new report released today by medical organisation Médecins Sans Frontières/Doctors Without Borders (MSF). Delays in responding quickly to treatment failures and interruptions jeopardise recent progress in reducing HIV deaths.

The report, No Time to Lose, spans 15 countries in Africa and Asia, and presents a dashboard of where countries are in terms of policies, implementation and funding to address advanced HIV, which killed 770,000 worldwide in 2018. Despite the existence of WHO guidelines since 2017 on advanced HIV, governments have been slow to include them in national guidelines, while meaningful implementation and funding lag even further behind.

The WHO guidelines recommend the roll-out of easy-to-use rapid tests to assess the status of people’s immune system (the CD4 cell count), and to diagnose the most common and deadly opportunistic infections, such as tuberculosis (TB-Lam urine test) and cryptococcal meningitis (CrAg test). These tests can deliver results in a matter of hours and, combined with proximity to patients, the days saved can make the difference between life and death for many. 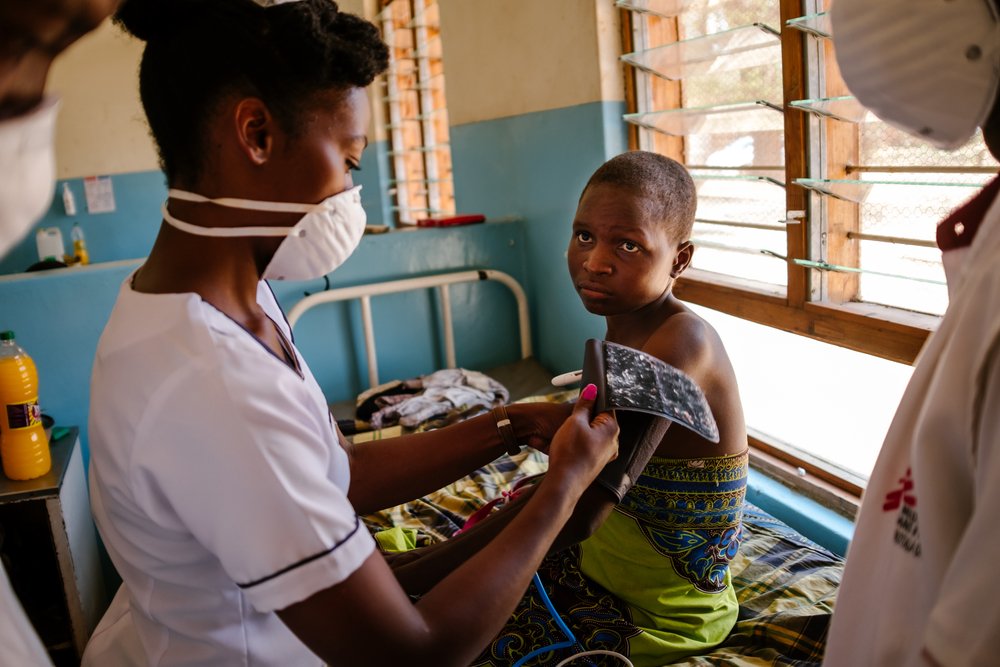 Isabel Corthier/MSF
Deborah Thondolo, MSF Nurse Mentor, is conducting a physical examination for Esther, an advanced HIV patient. In the picture, Deborah is measuring vital signs such as blood pressure.

Yet, MSF found that the rapid tests are almost never available at the community level, despite the fact that early detection could save many lives.

“There is no way the world will reach the target of less than 500,000 deaths from AIDS in 2020 without decisive action on dealing with retention to care, treatment interruptions and resulting mortality,” says Dr Gilles Van Cutsem, MSF Senior HIV Adviser. “In the past, the very sick patients we saw were those who did not know they had HIV. Today we see more and more people who have been treated before, but stopped taking their medication and fell seriously ill, and people whose treatment stopped working.”

More than two-thirds of patients with advanced HIV that are admitted to the MSF-supported hospital in Nsanje (Malawi) arrived already very ill and have been on antiretroviral (ARV) treatment before. At MSF’s Kinshasa hospital (DRC) this figure is at 71%. Among these, more than one in four people will die because the disease was too advanced when they reached the hospital. These deaths could have been prevented.

Since MSF made the rapid tests available in health centres in Nsanje district, the number of deaths at the hospital has decreased from around 27% to less than 15%.

Only eight of the 15 countries surveyed in the report use rapid TB-LAM to test for advanced HIV patients. They are used in hospitals in South Africa, and roll-out at community level is expected. Malawi plans to roll them out to 230 health centres in 2020, and pilot programmes to introduce the test are being launched in Lesotho and Nigeria. Another pilot was recently completed in Kenya before a possible national roll out of the test. 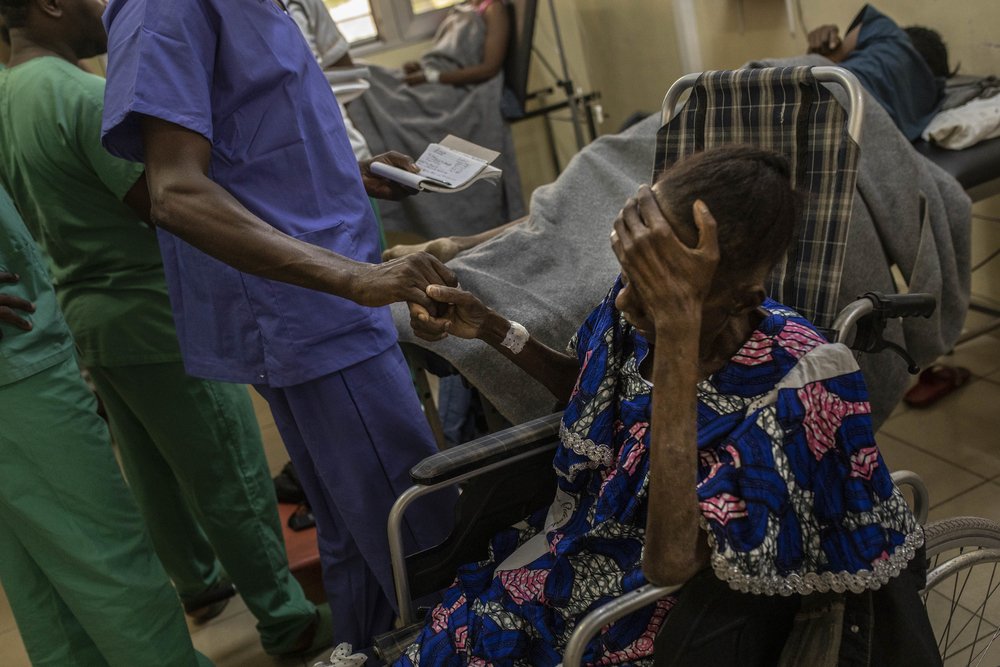 Pablo Garrigos/MSF
At the Kabinda Hospital Center (CHK) intensive care unit, a patient explains to the doctor her pain, and asks for medications to decrease it.

Only a third of the countries recommend using the rapid test for Cryptococal meningitis (which accounts for 15-20% of all advanced HIV-related deaths) for patients with very weak immune systems, including Kenya, Mozambique, South Africa, South Sudan, Uganda and Zimbabwe, but most of these countries have not yet implemented that recommendation on the ground

Currently, the TB-LAM and CrAG tests at primary healthcare level are only available in MSF-supported health centres in all 15 countries covered in the report.

The global UNAIDS 90-90-90 targets (90% living with the disease knowing their status, 90% of people with living with HIV get treatment and 90% of people on treatment have undetectable virus levels in their body) assumes a succession of stages in a linear way, but the reality is that the model is circular for lots of people who need to go back to the testing, and initiating phases after having passed those stages in the past.

“We all need to accept that the job is not over once people are on treatment and doing well. We have to be there for people for the whole treatment journey, which means people’s entire lives,” says Florence Anam, MSF’s HIV/TB Advocacy Coordinator and lead author of the report. “We will not end the ravages of HIV by digging more graves, but by doing all we can to keep people healthy, no matter where they live and what their life circumstances are. They must be supported mentally and medically as close as possible to where they live.” 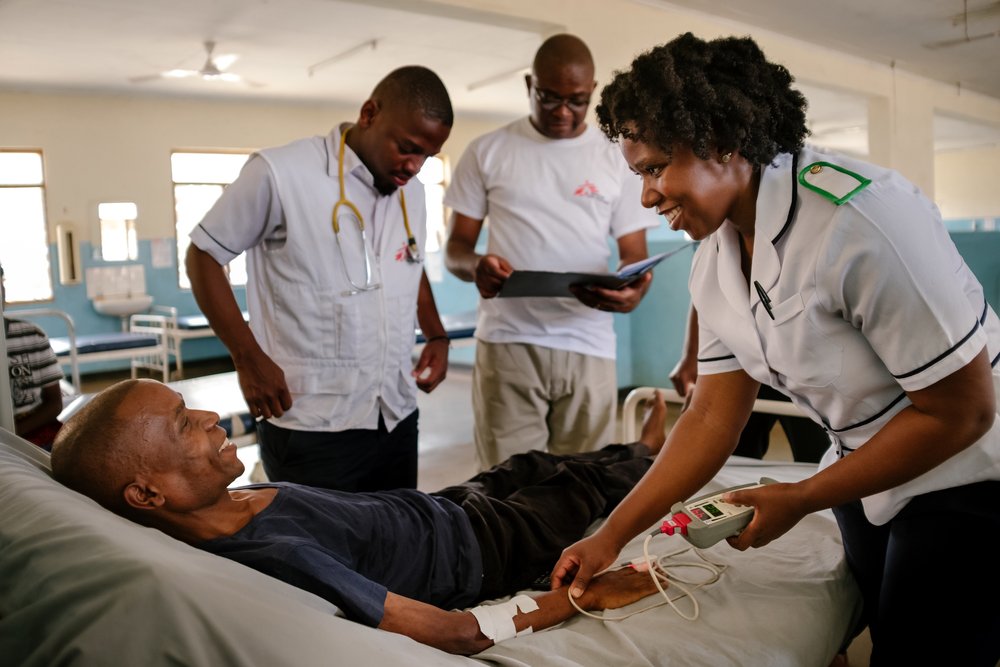 Some countries like Lesotho, Malawi, Kenya and Uganda have started making initial progress in advanced HIV guidelines implementation, but they will need to be supported financially. Donors should prioritise approaches to reduce mortality linked to AIDS.

MSF developed the Advanced HIV Disease (AHD) Dashboard to document the policy implementation progress of AHD management across 32 countries. The AHD Dashboard is a tool to track and monitor national policy status and further its translation into practice by focusing on factors that aid effective implementation. These include adoption of WHO’s Guidelines for managing advanced HIV disease and rapid initiation of antiretroviral therapy at country level, provision of AHD package of care, resourcing for diagnostic and treatment products for advanced HIV.

The progress of 15 of the 32 countries in the dashboard have been highlighted in this report. The countries highlighted are: Central African Republic (CAR), Democratic Republic of the Congo (DRC), eSwatini, Guinea, India, Kenya, Lesotho, Malawi, Mozambique, Myanmar, Nigeria, South Africa, South Sudan, Uganda and Zimbabwe. These countries were selected because of their high HIV burden, AIDS related deaths, and proportions of morbidity and mortality due to TB and Cryptococcal meningitis. They are also countries where MSF works to implement HIV/TB projects including for patients with advanced HIV disease projects.

From November 2018 to October 2019, we have tracked the progress of the above-mentioned countries by conducting a desktop review of each country’s national policy documents, primarily national guidelines. The data was verified by MSF in-country offices. In addition, MSF in partnership with CDC Foundation sent a mapping questionnaire to the 15 MSF country offices to give more granular information and asked to share these with their Ministry of Health counterparts in order to participate in completing the mapping questionnaires.

This report is a work in progress on the monitoring of country adaptation and implementation of AHD packages of care and form a baseline from which subsequent updates and reports can be developed in the future.