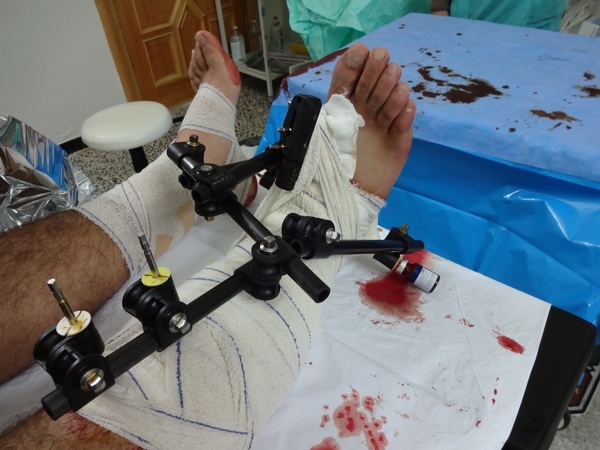 Image Caption
An external fixator applied to a patient in an MSF field hospital in northern Syria. Syria 2012 © MSF

Thirty-six wounded patients arrived early in the afternoon, after several barrels of explosives were dropped on a village, with one of those barrels landing close to a bakery. That night, MSF treated eight more patients injured by a rocket. Four of them died when they arrived at the hospital.

“Most of the patients we received were men, women and children wounded by debris or metal fragments from the explosions,” reports Marie-Christine Férir, MSF emergency programme manager and nurse, who was on site and helped treat the wounded.

“There were also people with eye wounds and one with an open fracture, who went into surgery. A little girl who suffered a skull trauma died while being transferred to Turkey.

The mountainous region of Jabal Al-Akrad, east of the city of Latakia, has been under near daily bombings for months. While most residents have left the area, those who remain live in constant fear of the barrels of explosives that are dropped by Syrian Army helicopters.

On January 13, another MSF hospital treated 20 wounded patients, including five children, after a market was bombed in the town of Azaz, in Aleppo region.

“Apart from the people wounded in the conflict, we continue to see an increasing need for medical care,” Férir notes.

“We treat around 500 patients every week, including for  respiratory diseases and chronic illnesses such as hypertension and diabetes. We are also assisting more women to give birth safely.

The health system in Jabal Al-Akrad’s mountainous region collapsed around two years ago. Now the winter cold and snow are reaching the region and medical needs are growing.”

MSF is working in three hospitals in northern and northwestern Syria, in areas controlled by armed opposition groups. Despite its repeated requests, MSF has not yet received authorization from the Syrian government to enter areas under government control to provide medical care there.

From late June 2012 to early January 2013, MSF teams conducted more than 10,000 medical consultations and performed more than 900 surgeries. MSF teams are also providing medical and surgical care to Syrian refugees in neighboring countries such as Jordan, Lebanon and Iraq.