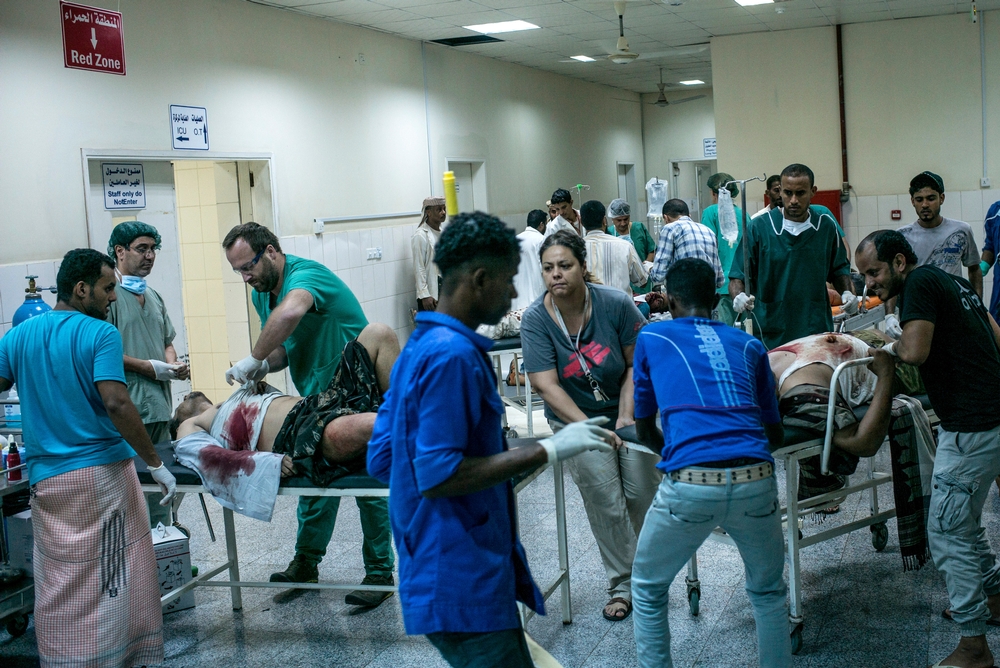 Interview with Thierry Goffeau, MSF project coordinator in Aden, mid-May to early August.  Violence was at extreme levels during that time in the capital of the southern part of the country.

As a result, we are still treating patients with gunshot wounds. You can gather up a handful of stray bullets every day in the hospital compound where we work in the Sheikh Othman district.

Last week, a bullet whizzed by the window of my office. A few days earlier, one came through the wall of the bedroom of one of our surgeons. 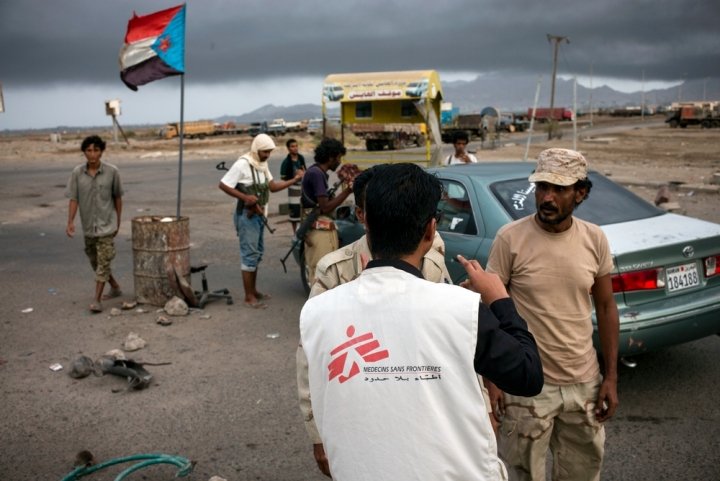 Guillaume Binet/MYOP
MSF team in Aden's streets. An MSF staff is speaking with armed men at a check point.

Clashes between the Southern Resistance and the Houthi militias have led to a large number of victims. On 19 July, we treated 206 wounded patients within a few hours at the Sheikh Othman district hospital.

The first patients arrived around 9:30 a.m. They had been struck by shrapnel. They told me that they were from the Dar Saad district, which had been shelled by the Houthis.

This attack targeted a poor and working-class neighborhood, where people live crowded on top of one another.

It is of no strategic interest. That day, we treated an unbelievable number of wounded patients. It went on all day, until 3:30 p.m. There were women, children, elderly people – basically, civilians. We had to turn corpses away.

Watch Vice New's video for scenes inside our hospital and an interview with Thierry.

Cars and pick-up trucks brought the wounded to the hospital because there are very few ambulances left in Aden.

At one point, I climbed into a truck that was carrying 15 bodies. Some were dead.  But there were people who thought that they were still alive. It was very tense because I could take only the wounded to be treated.

Several days later, Southern Resistance fighters launched an attack, on the north of Aden. On the 25th, we treated 167 wounded people and 111 the next day. They were all fighters.

Overall calm has been restored to the hospital but we face the recurring problem of armed men who want to enter when they bring in the wounded. 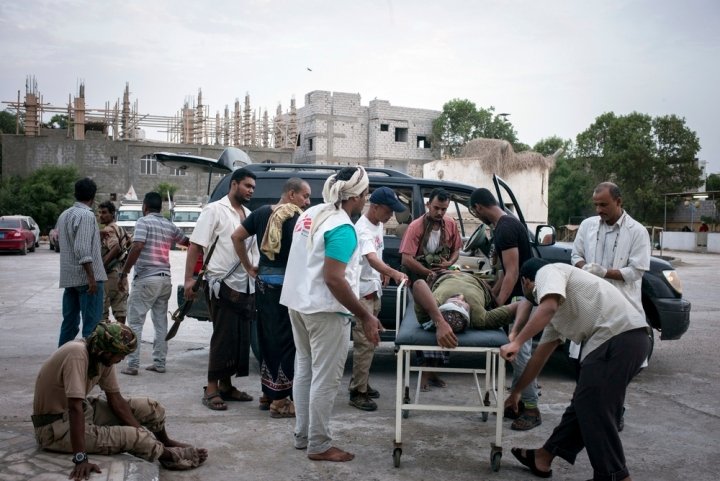 They are very agitated when they arrive, riding on pick-ups with machine guns or cannons mounted on them – their vehicles are sort of a cross between something from Mad Max and a Hummer.

We ask them to leave as quickly as possible. Normally, weapons are not permitted in a hospital where MSF is working.

But here, we have to manage and absorb an extreme level of violence – whether it’s at the entry gate on the street, at the entry to the building itself or in the patient triage area.

A crowd of people gathers - Southern Resistance fighters, visitors, caretakers, patients coming for post-operative care and who can’t be treated when there is an influx of wounded people. And they are very threatening. 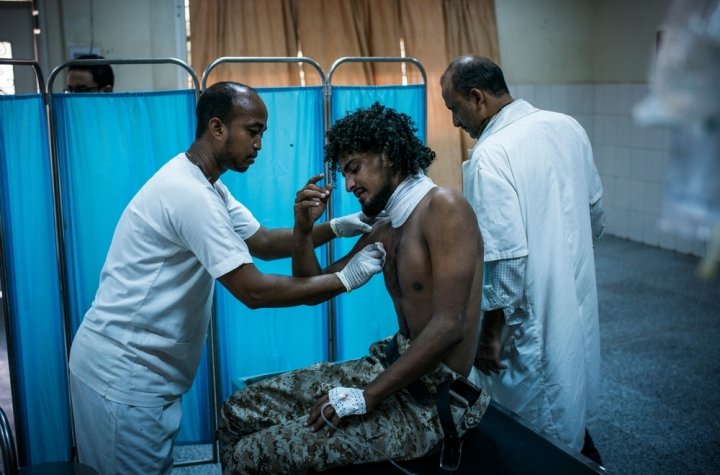 Guillaume Binet/MYOP
A fighter is treated inside the emergency room of MSF's Emergency Surgical Hospital in Aden.

The staff is now exhausted. The level of violence has only increased since early May.  But the surgical teams did an amazing job. The two operating rooms were busy 24 hours a day.

The emergency team was tremendous. Thanks to the entire MSF team, this project had a significant impact. They saved many, many lives and are continuing to do so.

We are also working in a trauma centre in the Crater district, which was a Houthi-held area until mid-July.

We were able to make sure that the Southern Resistance fighters did not touch the Houthi wounded, who were recognized as prisoners of war.

There are still water shut-offs. But that’s getting better now that the pumps can operate.  As far as electricity goes, there was none over the last two months.

The hospital generators had to run 24-hours a day and one broke down.

Over the last three months, we have had many days without water – without a single drop of water. We had just enough water stored at the hospital to sterilize the instruments.

People were drawing from the city’s old wells, which were being reused, but the water was very salty and poor quality.”

Find out more about MSF’s work in Yemen