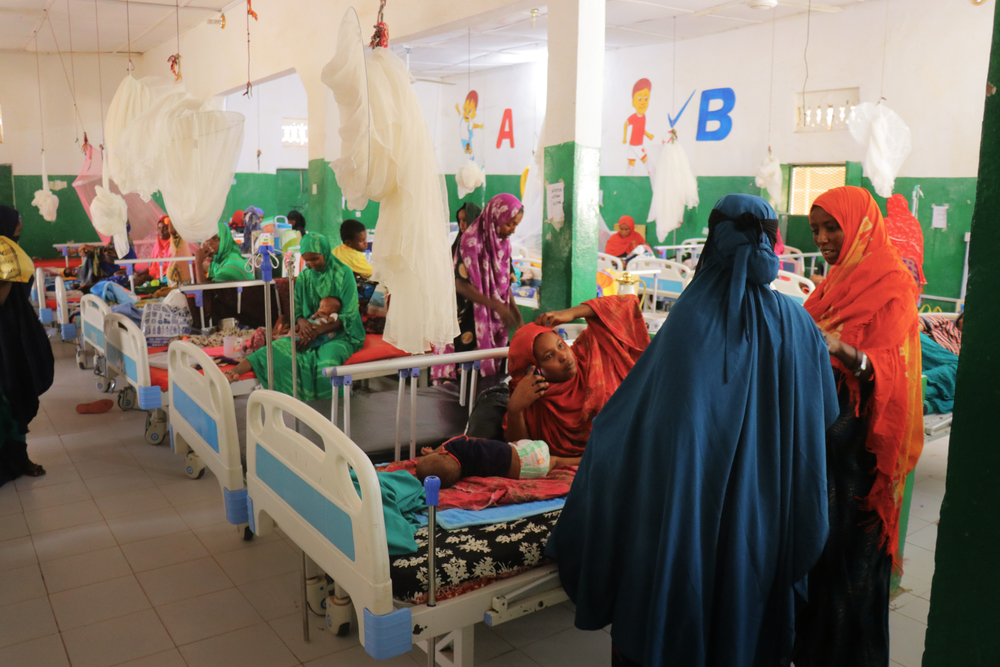 Southern and central parts of Somalia are currently affected by floods that have forced hundreds of thousands of people from their homes and triggered a humanitarian crisis. But even before the floods, people in Somalia were very vulnerable following decades of protracted conflict.

Galkayo, a town in central Somalia, hosts a large number of internally displaced people who have fled violence, drought and other climate hazards within the country. It also hosts migrants and refugees, as well as people from the neighboring Somali region of Ethiopia seeking better healthcare. 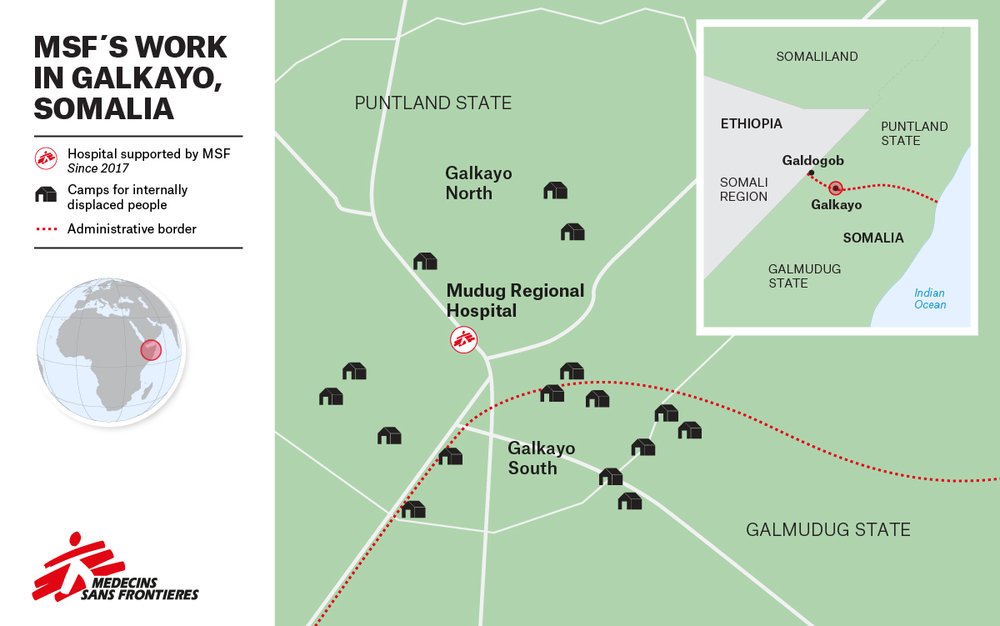 MSF
Map of MSF's work in Galkayo region in Somalia

Mudug Regional Hospital is the city´s main referral hospital, serving some half a million people. MSF has been supporting this facility since May 2017. Today, we work in the emergency room, care for malnourished children, treat people with tuberculosis, assist women with complicated pregnancies and run mobile clinics. These are some of the stories of MSF’s patients in Galkayo.

“My daughter Farhiya was very weak and wasn’t responding – it was like she’d fainted,” says Khadro Ahmed Abdi, 28. “When we arrived at the hospital at about 3 pm I was extremely worried. The nurses took her to the emergency room straight away.” 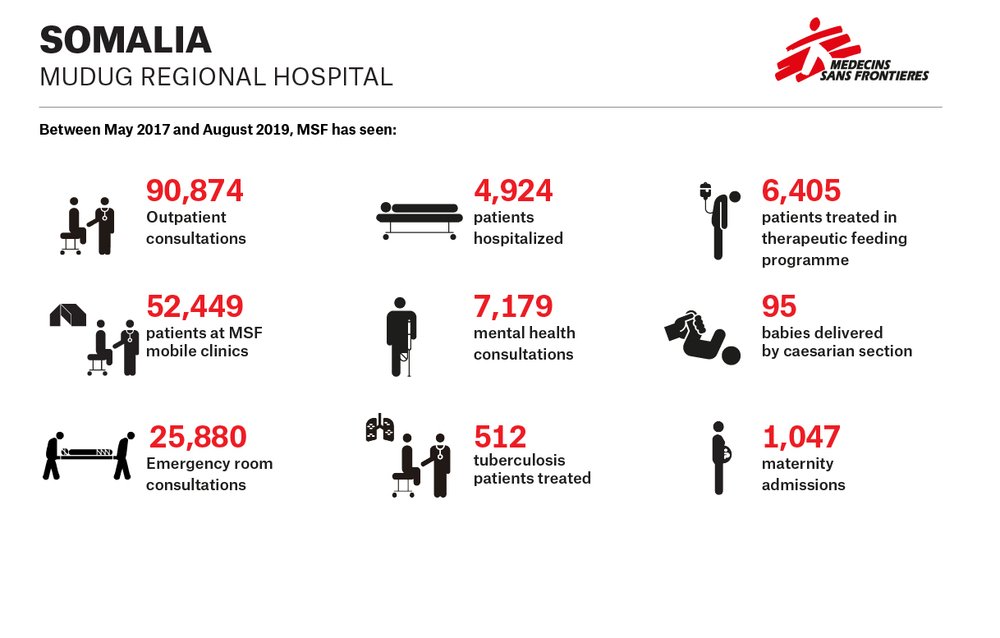 MSF
Infographic on the activites conducted on the Mudug Regional Hospital in Somalia between May 2017 and August 2019.
When her 11-month-old daughter fell sick, Khadro’s neighbours advised her to go to Mudug Regional Hospital, five hours journey from their village of Jira’le, in the Somali region of Ethiopia, leaving her eight older children in the care of her husband. The family, who are traditional herders, live in a drought-stricken region and survive on a single meal a day. Farhiya was severely malnourished and, by the time she arrived in Galkayo, she was unconscious. The nurses wasted no time in admitting her to the hospital’s inpatient therapeutic feeding centre.

“After receiving proper medical care and nutritious milk and biscuits [Plumpy’Nut, a therapeutic and highly calorific peanut-based paste], my daughter got better and two days later we were able to return home,” says Khadro. Without medical care, she says, many children like her daughter would simply not survive. 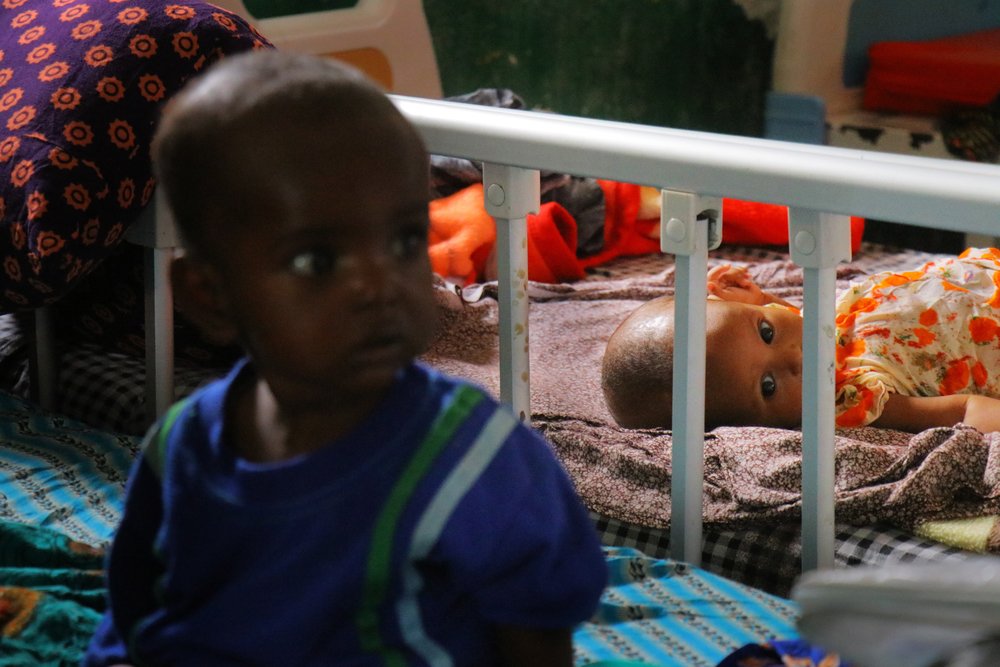 High rates of malnutrition in children are common across Somalia, especially among displaced families forced from their homes by violence and drought who often settle in poor urban areas. Between January and August this year, MSF treated nearly 2,000 malnourished children at this hospital.

The poor rainy seasons of recent years, exacerbated by poverty and harsh living conditions, have contributed to rising rates of malnutrition. This year in Somalia, an estimated 903,000 children under five are acutely malnourished, including 138,000 suffering from severe malnutrition, according to Unicef[1].

Eight-month-old Bilal lies next to his mother on a bed in the hospital’s paediatric ward. Brought to the hospital by MSF’s mobile medical team from his home in Bulo Ba’ley camp for displaced people, Bilal is recovering from acute watery diarrhoea.

“Bilal had diarrhoea for three days and was severely dehydrated,” says his mother, Kawsar Ibrahim, 25, whose three older children are at home with her husband, a casual labourer. “He was put on medication immediately after we arrived. The diarrhoea has now stopped and my son is doing well. I am so glad Bilal is well and will be able to play at home again soon.”

Five days after he was admitted for treatment, Bilal is ready to return home. 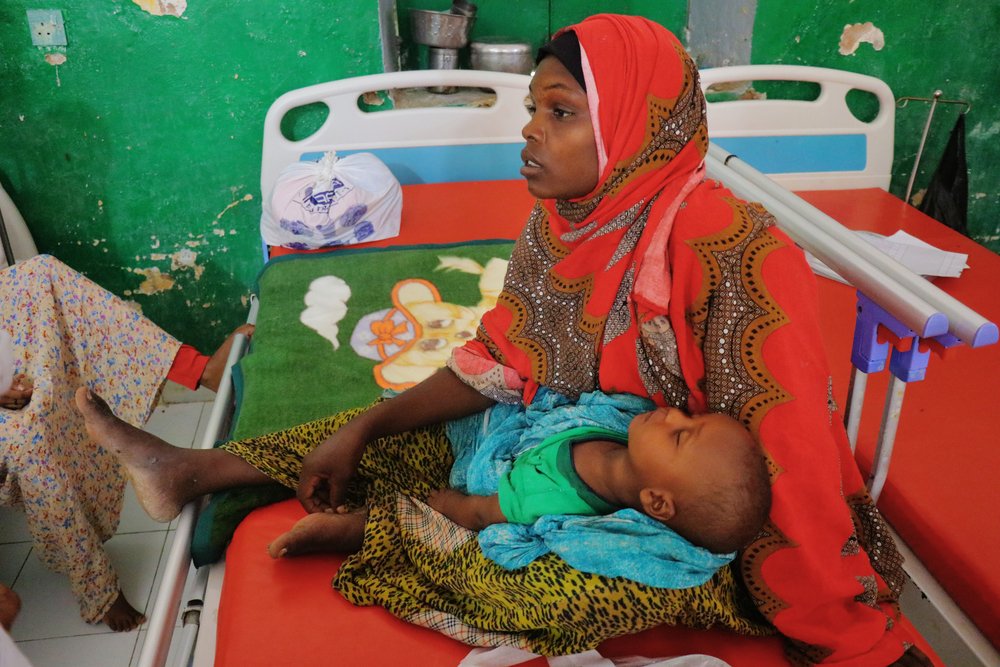 Galkayo town is split in two by an administrative boundary, with north and south each part of a different state: Puntland and Galmudug respectively. The town’s population is boosted by more than 100,000 internally displaced people (IDPs) from across Somalia, who live in camps with few resources. Some have been displaced for years. The MSF supported hospital provides free healthcare to displaced people, refugees and local communities coming from both sides of the city.

“Galkayo now has more than 70 camps[2] for displaced people, with more people arriving every week from conflict and drought-crippled regions of the country,” says Bashir Muse Hassan, MSF’s deputy medical activity manager in Mudug Regional Hospital. “Our mobile health teams visit 23 of the camps almost every day, providing basic healthcare and referring patients with critical health needs to the hospital. The displaced people do not have enough water or food so there are large numbers of malnourished children.” 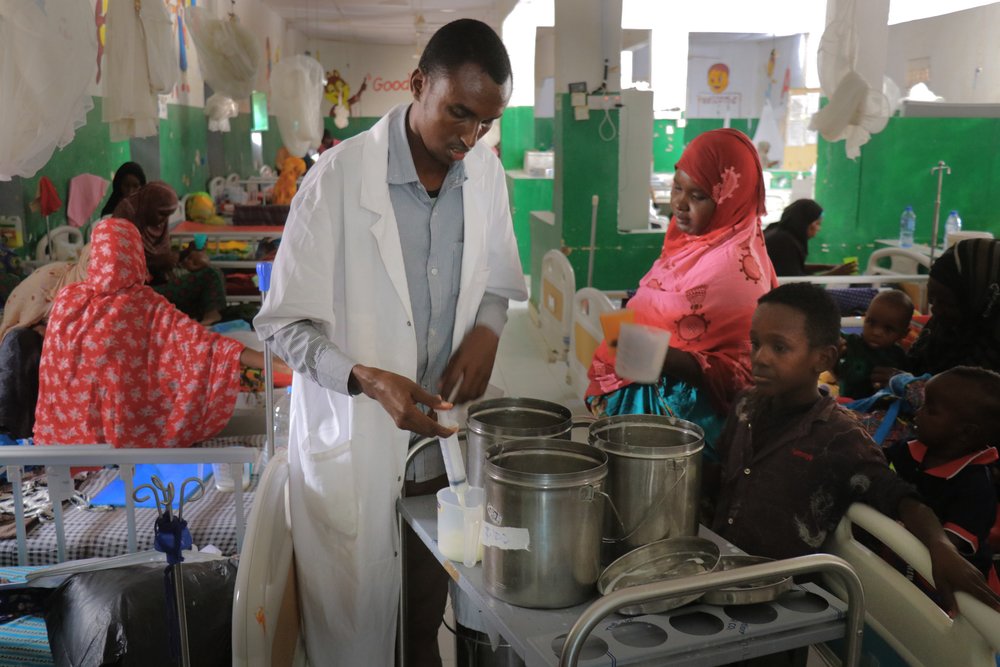 Abdalle Mumin/MSF
A male nurse is prepares milk for malnourished children in the therapeutic feeding centre at Mudug Regional Hospital in Galkayo city, in the Mudug region of Somalia.

Children are not the only vulnerable group in Galkayo. In Somalia, maternal mortality rates are among the highest in the world. For medical staff, as well as for families of pregnant women, managing complications during pregnancy and childbirth is a massive challenge.

Deqa Awil Hassan, a 32-year-old mother of seven, recently gave birth by caesarean, with the agreement of her family, after doctors informed her that she would not be able to deliver normally.

“I was in my 25th week of pregnancy when my uterus started to bleed. First I was taken to Galdogob hospital (Somali town next to the Ethiopian border) and then doctors referred me to this hospital,” says Deqa, who comes from Bokh district, in the Somali region of Ethiopia. “This was my seventh pregnancy and I was a bit scared. Fortunately, I delivered a healthy baby boy. I am so glad that both my baby and I are well. I want to name him ‘Abdi Nasib’ because he was lucky to be born alive [the names means literally ‘servant of the fate’].” 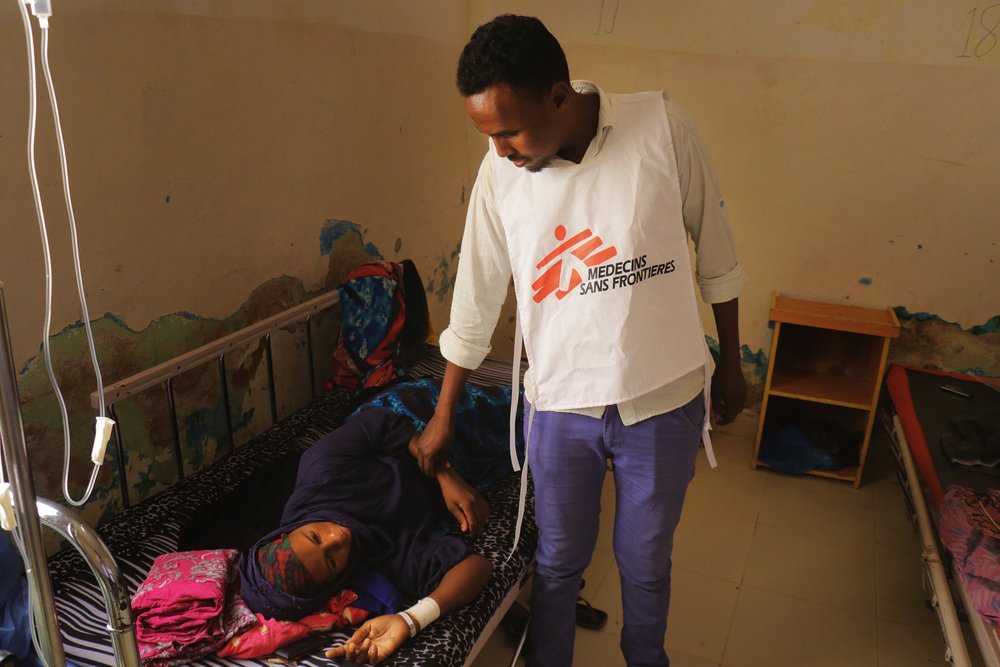 Abdalle Mumin/MSF
Dr Abdullahi Mohamed Muse, medical doctor in the at Mudug Regional Hospital maternity ward in Galkayo city, Somalia, checks the condition of Deqa Awil Hassan, a woman who had a Caesarean-section.

In June 2019, the MSF team at Mudug Regional Hospital received more than 170 women experiencing complications in labour in addition to 19 others who needed an emergency caesarean. “From that number, you can estimate how vital these services are for the local community,” says Bashir.

Internal bleeding of the uterus is relatively common in pregnancy, explains the obstetrician Abdullahi Mohamed Muse, and only 30 per cent of women with this condition need a caesarean. “We observe and monitor the condition to decide what intervention to do to save the life of the pregnant mothers and their unborn babies,” says Abdullahi. “Such operations [emergency caesareans] are only needed when the life of the pregnant mother is at risk. We try to explain that and convince families of the importance of saving the mother’s life. This may help reduce the high maternal mortality rate in Somalia.” 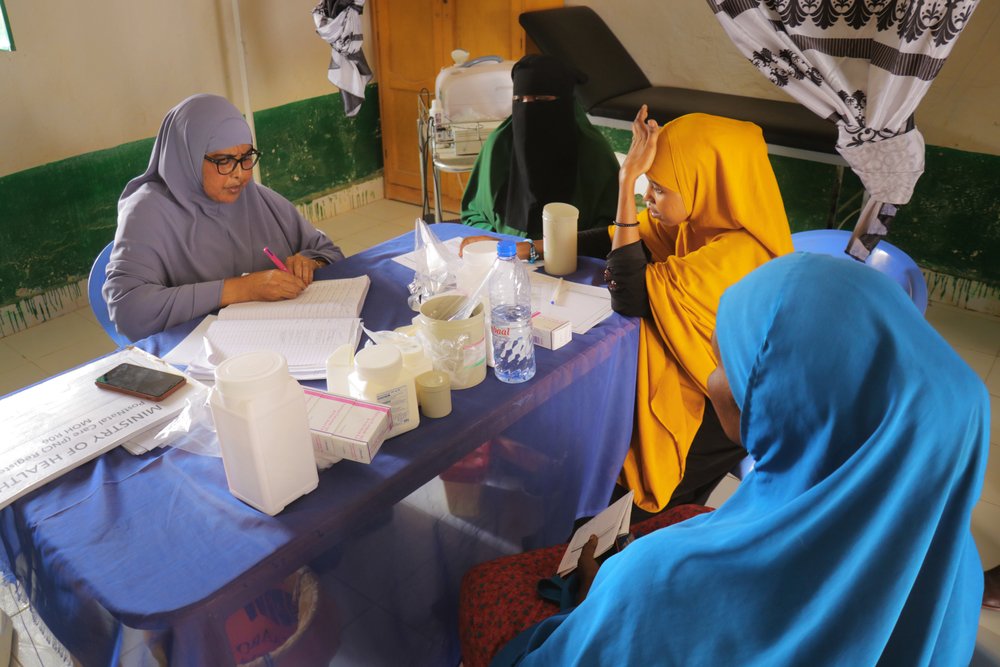 MSF teams in Mudug hospital are also working to reduce the burden of tuberculosis (TB), a disease that spreads easily in overcrowded living conditions, such as in the camps for displaced people in Galkayo. In Somalia, the diagnosis and treatment of TB is often unavailable or is prone to interruption, which can cause drug-resistance.

Currently there are 172 patients for both drug-susceptible and drug-resistant TB enrolled in the treatment programme, while in the first half of 2019 almost 100 patients successfully completed their treatment. Despite the achievements, there are challenges. Nur Ahmed Nur, who has managed the TB ward since its inception, says that patients defaulting from medication can be a problem. To help prevent this, the team works with the community and encourages patients to bring a relative with them to support them throughout the treatment. 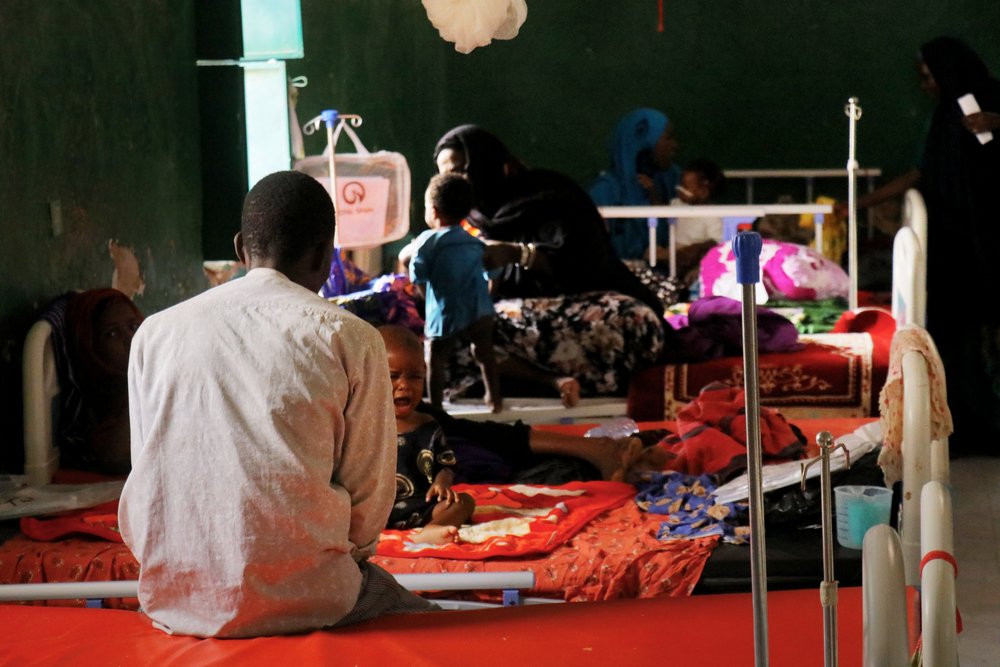 “Following them up will help us ensure that all patients receive their drugs every single day,” says Nur. “This in turn helps avoid the development of drug-resistant TB.”

Fardowsa Hussein Hassan, 40, from north Galkayo, caught pulmonary TB. She successfully completed her treatment in June, but returns to the hospital for regular check-ups.

“I was very weak and sick when I was brought to the hospital in January,” says Fardowsa. “I was coughing for weeks and, when doctors took my sputum to the laboratory, I tested positive for TB. I was immediately put on medication. Six months later, I have now tested negative. I thank the hospital management and all those who support the TB department.”

MSF has worked in Somalia and Somaliland since 1991. In 2013, it was forced to withdraw after a series of violent attacks against its staff. Our teams resumed treating patients four years later, in May 2017, in recognition of the enormous unmet health needs of the population. MSF provides secondary health and inpatient care in hospitals, runs mobile clinics with a focus on populations on the move such as refugees, IDPs and migrants and is currently working in Somaliland (Hargeisa, Borama, Burao, Berbera, Las Anod), Puntland (Galkayo North) and South-West (Baidoa). MSF relies on an ‘in-out’ strategy in Jubaland region, with a specific focus on ambulatory nutrition care and doing as well emergency response. In the coming weeks, MSF will start implementing lifesaving activities in some departments of South Galkayo hospital, in Galmudug state.

OUR WORK IN SOMALIA >