DRC: Helping each other- Stories of solidarity after Nyiragongo eruption

Mount Nyiragongo, a volcano in North Kivu province, Democratic Republic of Congo (DRC), erupted on 22 May, leaving hundreds of thousands of people displaced, amid threats of new disasters. The tremors and aftershocks that terrorised the city of Goma, collapsing buildings, triggered a mass evacuation. Families who sought shelter in distant towns, such as Sake, Rutshuru and Minova, struggle to access the aid they so desperately need. At the same time, they find support among the people of the cities they fled to.

"Thousands of people have arrived in this small town"

Faida Lumo is a resident of Sake and has been hosting people who left Goma since the day after the eruption. 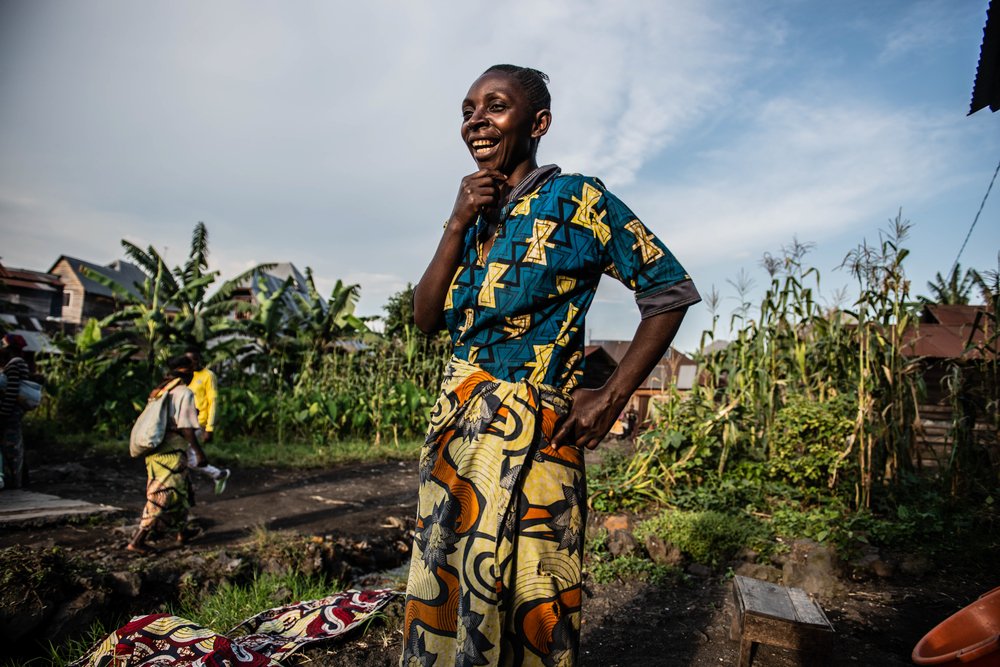 Moses Sawasawa
Faida Lumo in front of her house in Sake. The town sheltered about 180,000 people displaced from Goma after the eruption of Mount Nyiragongo. Faida hosted 17 people.

“My children and I moved the furniture to accommodate as many people as possible,” Faida says.

“It was not enough, and we took over my mother's house, right next to mine. After the order came to evacuate Goma on 27 May, thousands of people have arrived in this small town on the shores of Lake Kivu.” 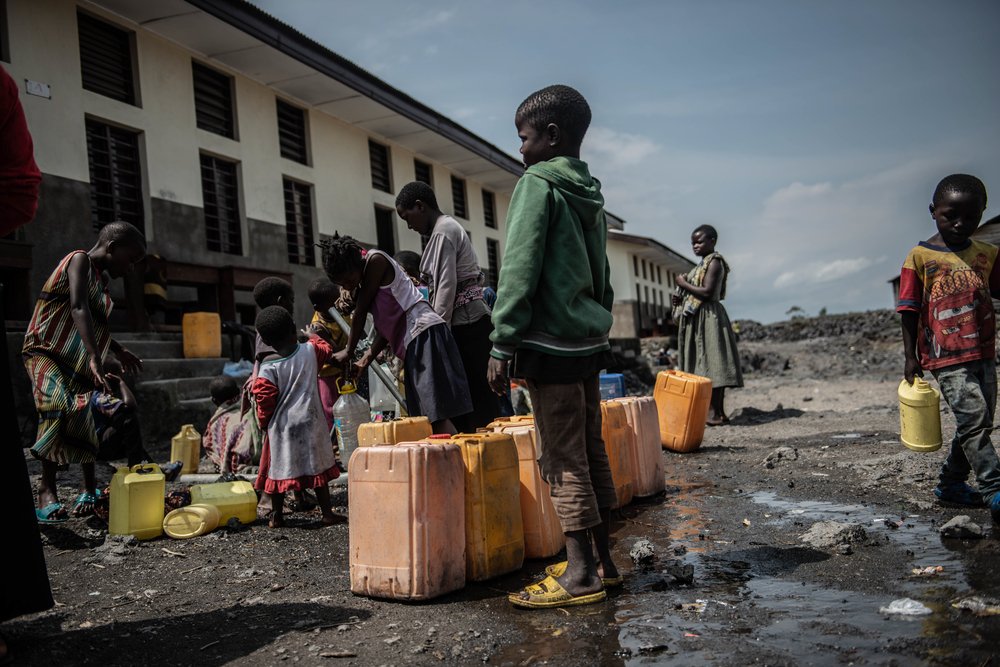 “We organized ourselves into teams to fetch water,” Faida says.

In total, Faida has provided shelter to 17 people, despite having to face conditions of deprivation.

“It had become very difficult, especially because of the lack of drinking water,” Faida says.

"In the first four days of work in Sake, MSF distributed 243,000 litres of water to local and displaced people" 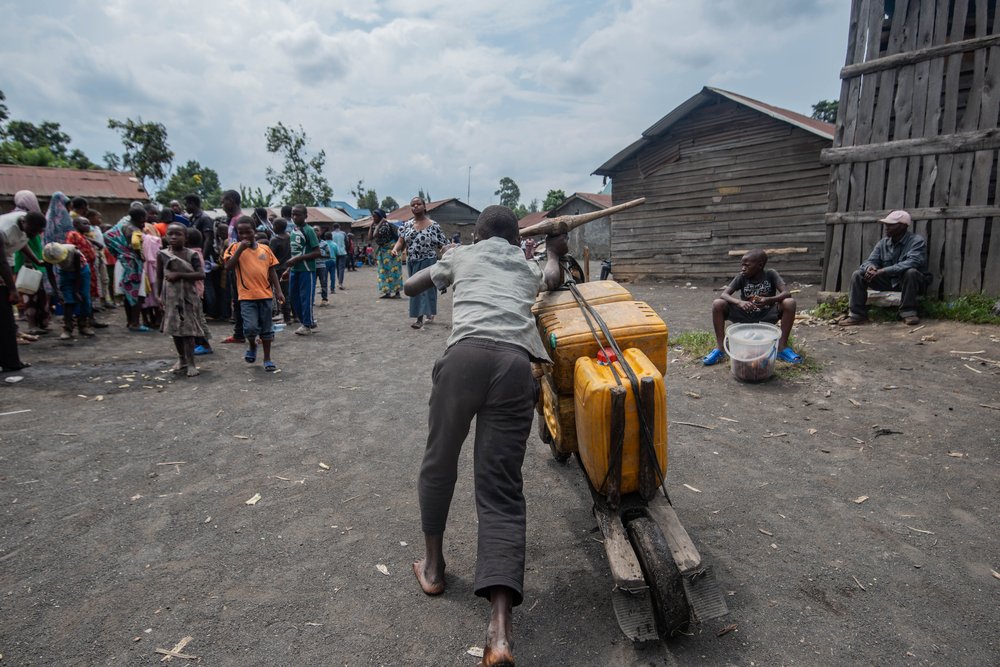 “We organised ourselves into teams to fetch water from a stream near our home, then we disinfect it thanks to the chlorine distribution points installed by Médecins Sans Frontières."

Cholera is an endemic disease in Sake and one of Médecins Sans Frontières’ (MSF) first concerns was to provide safe drinking water.

With the city overcrowded with newcomers, the few supplies available were not enough to meet the needs of thousands of people. 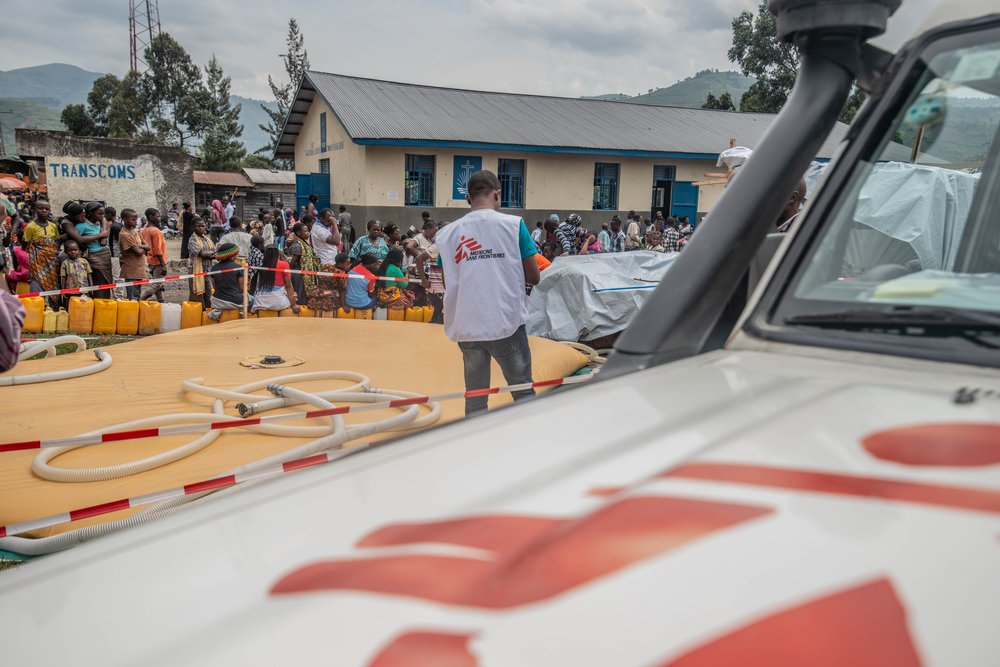 In the first four days of work in Sake, MSF distributed 243,000 litres of water to local and displaced people.

The organisation also built latrines and increased the number of chlorine distribution points, as a way to promote hygiene measures that prevent the spread of waterborne diseases. 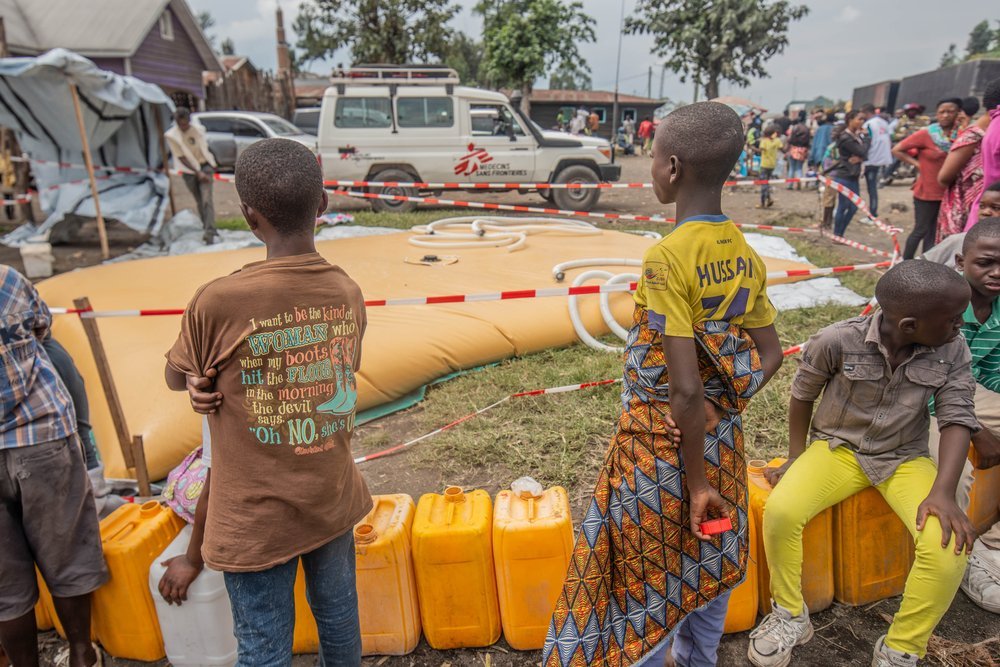 Full support is given to the Sake cholera treatment centre, which was already dealing with the endemic disease, well before the arrival of the thousands of displaced people in the small lakeside town.

In other cities such as Rutshuru and Minova, MSF teams assessed the needs of the displaced and are responding to their urgent needs. 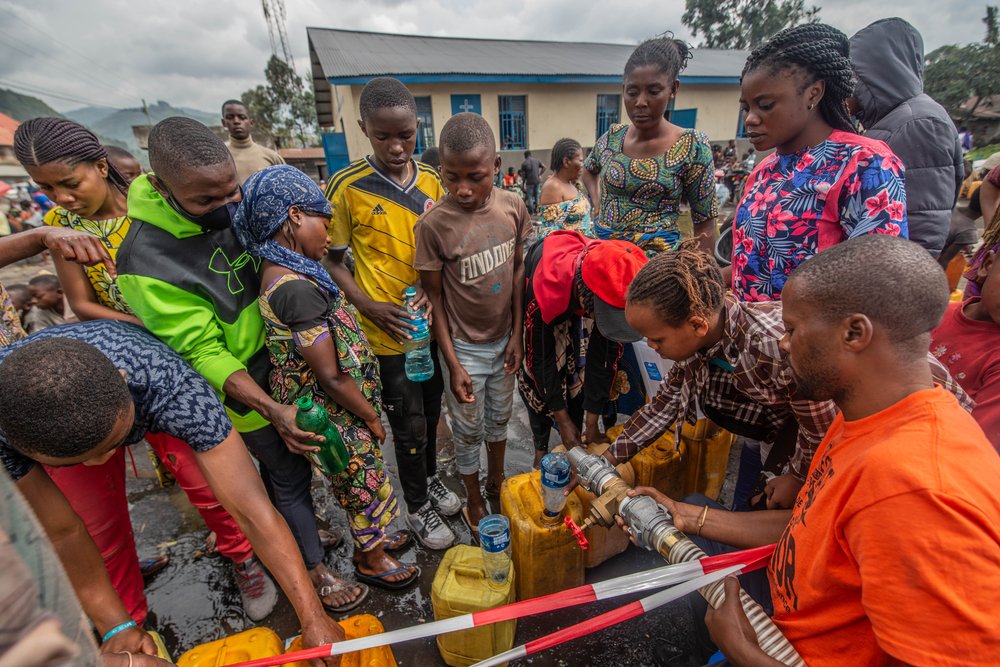 The displaced sleep in churches, schools, or the homes of local supportive families, while others bed down outside. Many residents say they have hardly eaten in the past days.

“We have joined forces to raise funds and help those who have nothing left”, says Syntexe. 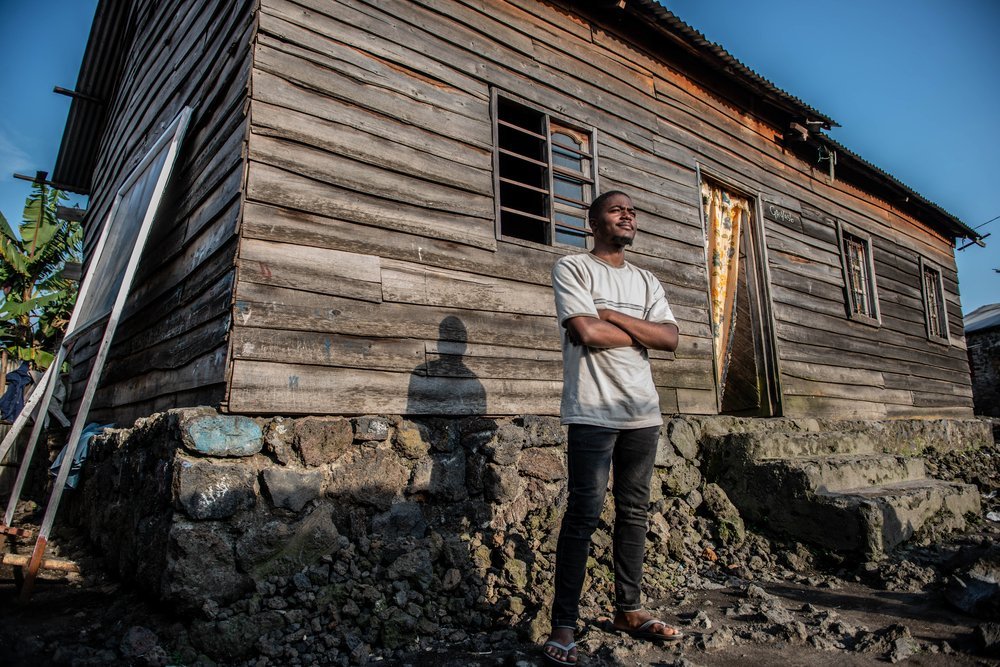 Moses Sawasawa
Antoine Ngola Syntexe, student from Goma, outside the house in Sake. Since he fled to Sake, he is helping the most affected population. “Even if humanitarian actors, and MSF in the first place, are doing what they can, many people are in great difficulty"

Antoine Ngola Syntexe is a 23-year-old student who arrived in Sake with his parents and three siblings after the authorities ordered the evacuation of parts of Goma.

He joined youth civil society groups to try to meet the immense needs of other displaced people in the city.

“The crowding of people into the sites where they had found shelter generated tensions,” says Syntexe.

“Fortunately, we have access to free healthcare, thanks to MSF. They treat everyone, without asking for payment.”

Thousands of people decide to return to Goma

In different cities that are serving as shelter for the displaced people, the lack of essential goods, such as utensils to cook and blankets, has made thousands of people decide to return to Goma, even before the government's announcement that it was safe to return.

This is what happened to Dieudonné Bizimungu, whose house in Goma was close to being swallowed by lava.

He went to Kibumba, north of the city, and returned with his family after two days.

“We don't know where to go to escape this new danger. We too, in Goma, need assistance and medical care. ”- Dieudonné Bizimungu

Even if he was back to the place he knows as home, the situation in Goma was no better than at the places where displaced people found shelter.

“Night and day, we continue to feel the heat of the lava. We don't know where to go to escape this new danger,” says Bizimungu.

In Goma and surrounding areas, MSF provides free basic healthcare consultations, and medicine and hygiene items to the displaced. 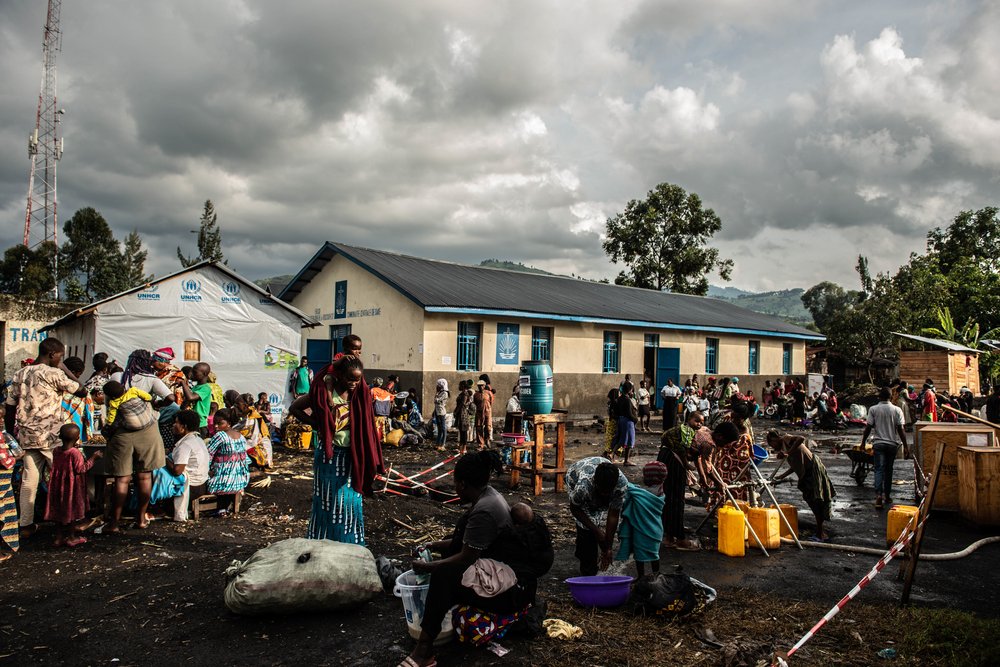 From the 180,000 people who looked for shelter in Sake, around 36,000 were still there as of June 6. The New Apostolic Church is one of the largest reunification sites that has welcomed hundreds of families in difficult conditions.

Besides keeping the health support provided for patients in Goma before the disaster, medical teams are reinforcing cholera surveillance and monitoring systems in four health centres in the city, in collaboration with the Ministry of Health.

The association of water dealers on bicycles in Goma

The lack of access to water remains one of the biggest problems in the city.

About half million inhabitants have been without access to clean water since lava poured into the city’s main reservoir. Since 22 May, water has become a scarce commodity.

People therefore need to resort to paying for water jerrycans. Jean-Claude Bazibuhe has been a water seller in Goma for 17 years. 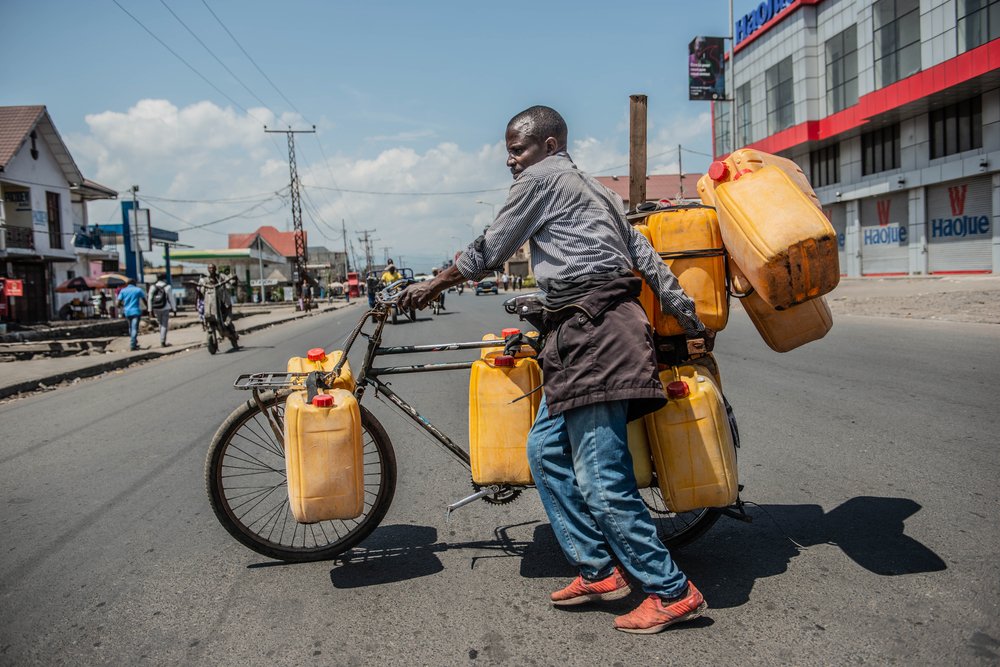 “I am part of the association of water dealers on bicycles in Goma, a structure that allows us in this particular period to supply people with drinking water,” explains Bazibuhe.

“The demand for potable water is on the rise due to damage to the city's main water reservoir.” 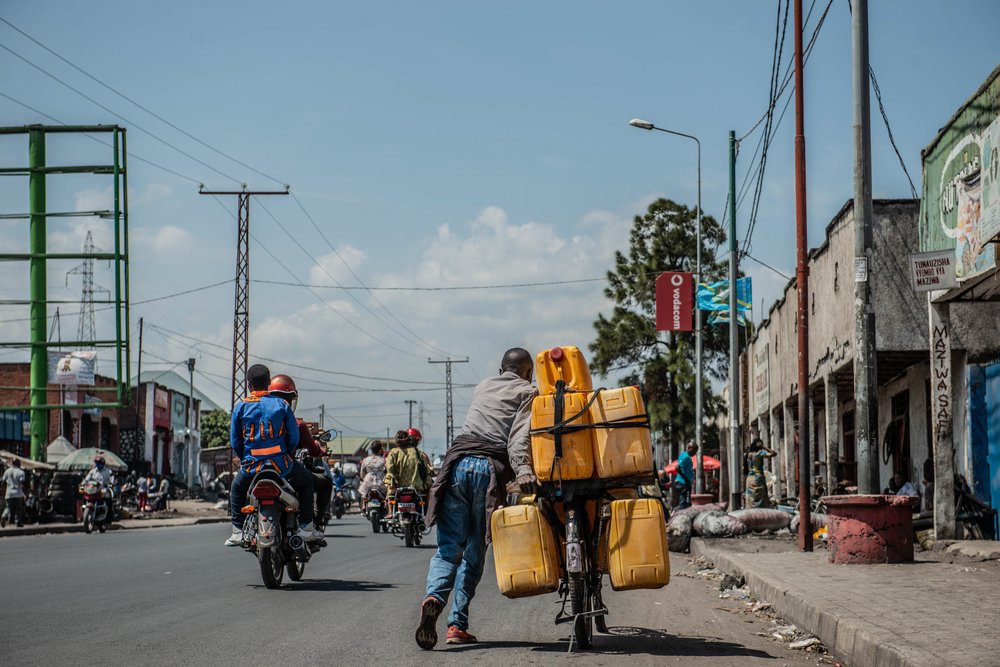 For Bazibuhe, this is reason to work even harder.

"The mobilisation of different organisations and the government will be necessary to respond to all the demands of people, who, in many cases, lost everything they had. And not only water."

“I have seven children; I understand the difficulty of these families that have no water. I cannot take advantage of the current crisis situation to make money and double the price of my services,” says Bazibuhe. 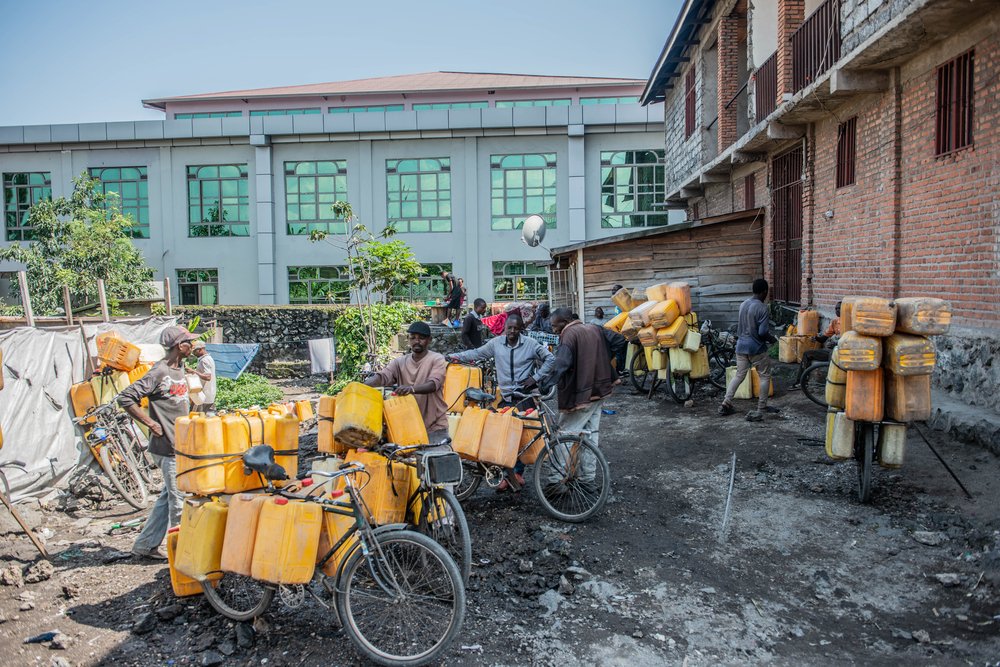 Bazibuhe is well acquainted with both the suffering of the people who remained in Goma and those who had to leave the city.

“When the night turned red, we rushed out of the house to escape the danger,” he says.

“Two of my children were injured and they are still in pain. They took shelter in Minova, in South Kivu.”

With the current government order for people to return to Goma, the need for humanitarian aid in the city will grow exponentially. 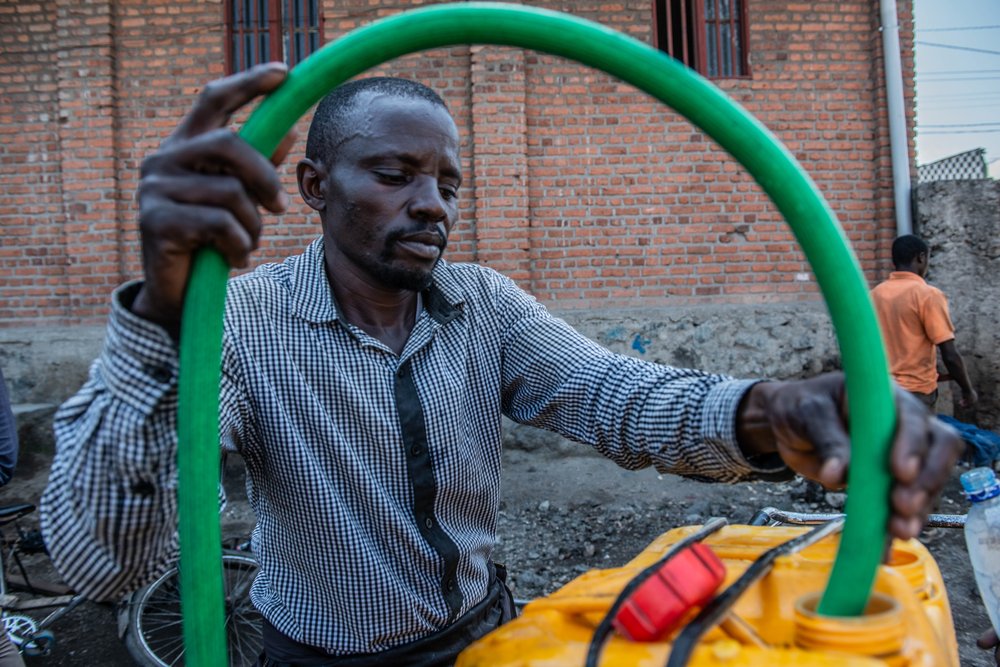 The mobilisation of different organisations and the government will be necessary to respond to all the demands of people, who, in many cases, lost everything they had. And not only water.

Jean-Claude Bazibuhe says that after a few days in Minova, his family has returned to Goma: “Now, it is hunger that grips them”.