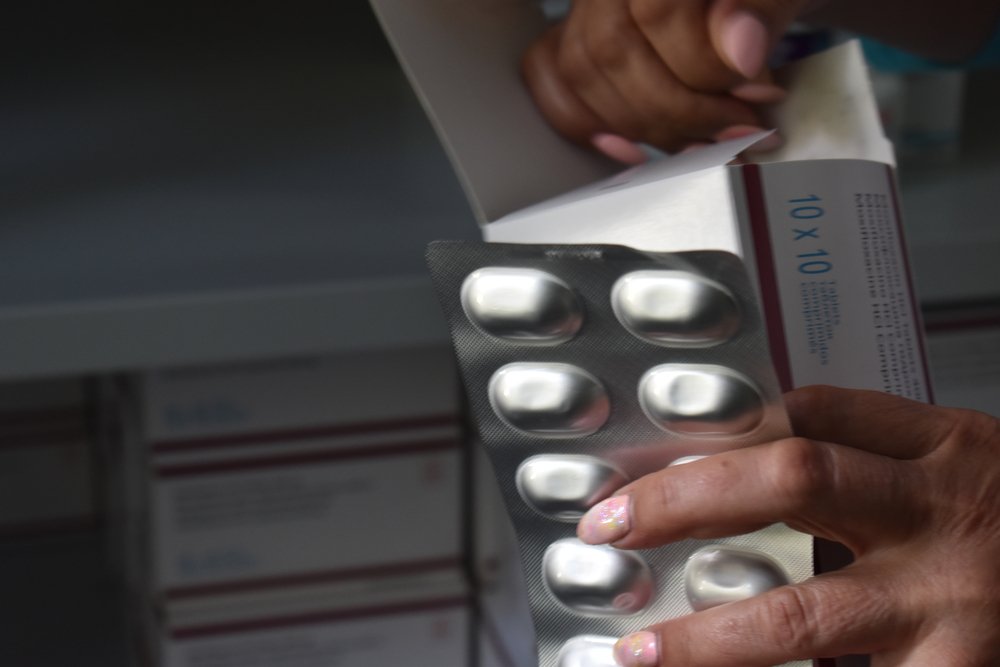 MSF/Alexandra Sadokova
Packages with moxifloxacin in the hospital pharmacy of the Republican Scientific and Practical Centre for Pulmonology and Tuberculosis, Minsk, Belarus. Moxifloxacin was used in the pioneering TB-PRACTECAL clinical trial and now used in the SMARRTT operational study. TB-PRACTECAL is the first-ever multi-country, randomized, controlled clinical trial to report on the efficacy and safety of a six-month, all-oral regimen for Rifampicin-resistant tuberculosis (RR-TB). It tested a six-month regimen of bedaquiline, pretomanid, linezolid and moxifloxacin (BPaLM), against the locally accepted standard of care. The trial took place in seven sites across Belarus, South Africa and Uzbekistan.

“On the tenth day of my treatment, I could tell that something was wrong with my ears,” says Maria. “The drugs were affecting my auditory nerve. Having the injections was very painful and left lumps and bumps on my body. Even sitting down was painful.”

Maria was receiving treatment for drug-resistant tuberculosis (DR-TB). Despite gains made the past 20 years, Belarus is still one of the 30 countries with the highest tuberculosis (TB) burden globally. Around one-third of patients in Belarus have strains of the disease that are resistant to the most potent TB medicines. The standard treatment undergone by Maria takes up to 20 months and involves painful injections and a plethora of possible side effects, ranging from aches and pains to depression to irreversible hearing loss.

A revolution in TB treatment

For decades, DR-TB patients had no option but to undergo this long and exhausting course of treatment. But in 2017, Médecins Sans Frontières/Doctors Without Borders (MSF) started a revolutionary clinical trial, known as TB-PRACTECAL, to test innovative approaches towards DR-TB treatment. In three countries –Belarus, South Africa and Uzbekistan – MSF treated patients with a new short course of drugs, which were all taken orally, avoiding the need for painful injections.

In 2022, the results of TB-PRACTECAL were published. They proved that the new all-oral six-month treatment regimen – comprising the drugs bedaquiline, pretomanid, linezolid and moxifloxacin, known collectively as BPaLM – was safer and more effective at treating DR-TB than current accepted treatment practices. This announcement turned over a new page in the history of TB treatment worldwide.

Soon after, the World Health Organization (WHO) updated its global guidance on the treatment of DR-TB, now recommending programmatic use of the six-month BPaLM regimen in place of the longer existing regimens.

One patient who took part in MSF’s clinical trial was Volha, a mother of three from Minsk. Soon after giving birth to twins, she was shocked to be diagnosed with extensively drug-resistant TB (XDR-TB). Although separated from her newborns so as not to put them at risk of infection, she still managed to embark on the treatment with a positive attitude. Her optimistic outlook and the support she received from her family were major factors in her recovery, she says.

“The locomotive of the treatment rode smoothly and did not stumble at any point,” says Volha. “Everything was done with love for the patients. I had a mantra in my head during my time in hospital: ‘We are not patients, we are not sick, we are recovering. Every day we are moving towards recovery.’ I said this to the other patients too.”

Volha has now recovered fully and is back at home with her three children.

“I tried to see the positive in everything, for example, my handful of pills could be laid out in the shape of a bunny.” 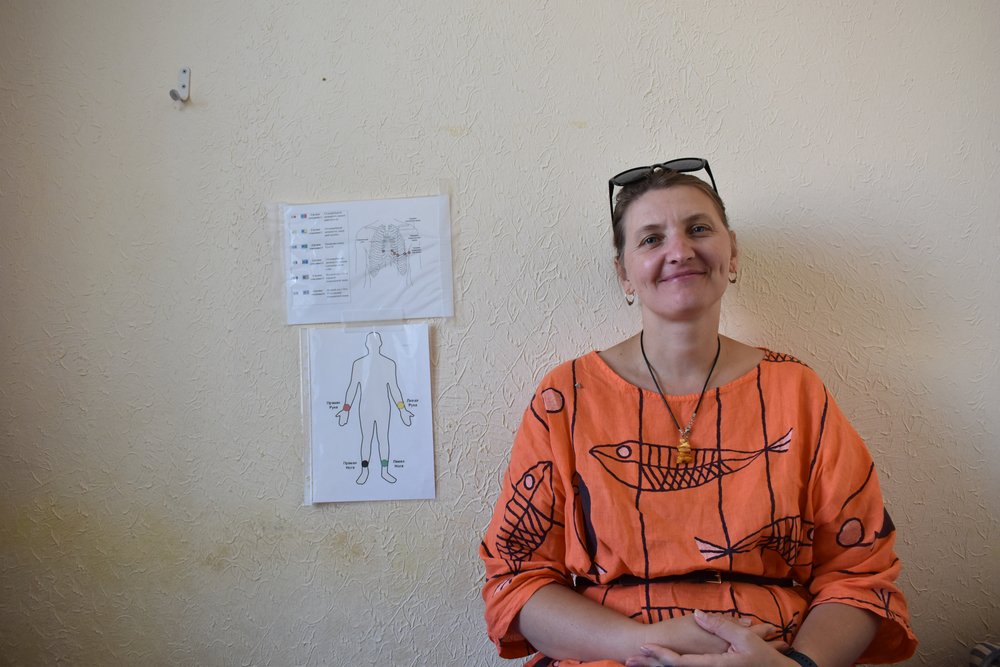 MSF/Alexandra Sadokova
Volha 39 years old, a former TB-PRACTECAL patient, in the Republican Scientific and Practical Centre for Pulmonology and Tuberculosis, Minsk, Belarus. She was one of the first DR-TB patients in Belarus enrolled into the pioneering TB-PRACTECAL clinical trial.

Making innovation available to all

In Belarus, the TB-PRACTECAL clinical trial has been followed by a new pioneering operational study known as SMARRTT – which stands for ‘six-month all-oral regimens for rifampicin-resistant tuberculosis treatment’.

MSF, in close partnership with the Republican Scientific and Practical Centre of Pulmonology and Tuberculosis in Belarus, is currently recruiting patients for the SMARRTT study, with 300 people already enrolled. The plan is to roll it out across the country.

“Previously, during the TB-PRACTECAL clinical trial, we could only include patients from Minsk and the Minsk region, but now we can include patients from all over Belarus,” says Dr Natalia Yatskevich, principal investigator of the SMARRTT study in Belarus and National TB Programme doctor. “Pharmacists from different regions come to us and take away the medicines so that patients can be treated in their hometowns.”

Maria is enrolled in the SMARRTT study, after undergoing two long years of treatment which ultimately failed to cure her of DR-TB. “For me, everything over the past two years has revolved around TB,” says Maria. “Living like that was impossible. People [DR-TB patients] can’t do anything because they feel awful [during the treatment]. If only I had started treatment with a short course right away, my life would have been different.”

TB has changed the life of Maria and her family completely; they have had to move to a new city and make a new circle of friends. During this difficult time, Maria’s husband was a great support to her.

“We have been together for almost 17 years,” she says. “A lot has happened in those 17 years. In 2015, my husband fractured his skull in an accident and ended up in intensive care. He had a long period of rehabilitation. It was a difficult time, but we supported each other. Now we have changed places.”

“I felt like I’d drawn an unlucky lottery ticket. I honestly thought I would die, that everything was over for me.”

Stigma still exists when it comes to TB

In countries where TB is prevalent, stigma around the disease is still a major problem, and Belarus is no exception. Many TB patients face a lack of acceptance by society and even by those close to them.

“I told my friend Anya about the diagnosis and she panicked,” remembers Maria. “She asked: ‘What if you infect me?’ I kind of understood her point of view. After that Anya stopped communicating with me. She has two university degrees, she’s a smart person.”

Liza [not her real name], another DR-TB patient and SMARRTT participant, thinks that the problem is society’s lack of knowledge about TB – and specifically that it can affect anyone. “The reality is that no one is safe, everyone can get infected,” she says.

“I had a break-up with my boyfriend, I cried for two months and was very stressed. Then I had a medical check-up at work. It was a surprise to find out I had TB.” 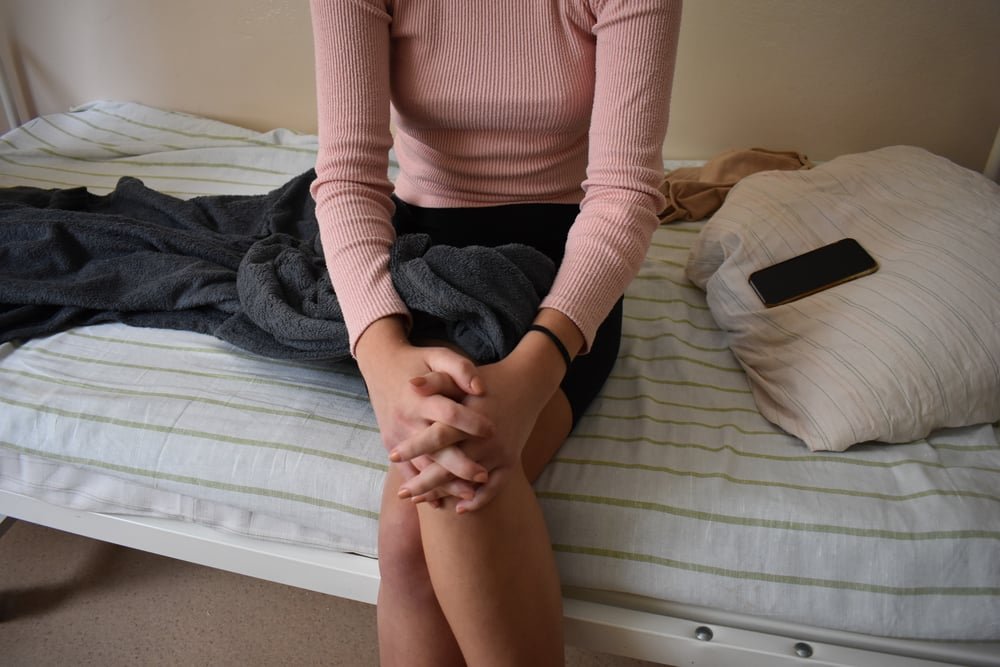 MSF/Alexandra Sadokova
Liza* 20 years old, a SMARRTT operational study patient with DR-TB, on a hospital bed in the Republican Scientific and Practical Centre for Pulmonology and Tuberculosis in Minsk, Belarus. Liza is afraid of negative attitudes people have towards patients with TB and keeps her diagnosis private. *name was changed

Former TB patient Volha believes that the low visibility of people with TB makes them easy to ignore by society at large. “People with TB are hardly visible,” she says. “We all know from the Belarusian literature – from Bahdanovič [a famous literary figure] and others – that people with TB are pale girls who faint all the time. But in reality, very few people with TB are like that. So many times I’ve heard people say: ‘What, people still get TB nowadays?’ Well yes, they certainly do!”