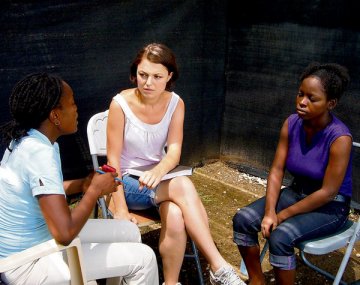 Broken quake survivors suffering in mind as well as body

THEY SIT slumped on a wooden bench in the tent hospital run by French doctors, waiting to talk to someone about their loss and trauma, waiting for the magic pills the doctor dispenses. Some eyes glisten with tears. Others stare blankly, beyond emotion, beyond despair.

Miselaine Dieujuste (22) lives under a tarpaulin beside the airport road, with two younger brothers and a little sister. She is frail and speaks slowly, as if each word demanded extraordinary effort. She doesn’t know which is worse: grief over the death of her mother, or the obstacles of daily survival.

“The owner of the land where we are forbade any distribution of aid,” Miselaine explains. She and her siblings are squatters at a place called Pasta Mama. The landowner, whom she calls Monsieur Gilbert, is from a wealthy mulatto family that owns a pasta factory.

“Monsieur Gilbert has ordered us to leave by July 15th,” Miselaine says. “I don’t know what we will do.”

There are organised camps, managed by aid groups, but Miselaine believes men living there extort money from newcomers, just to let them pitch their tarpaulin. “I told the psychiatrist about it, but she said she couldn’t help. With the medicine, at least I sleep.” Miselaine knows exactly what she needs. “My mother owned nothing. We rented our house,” she says. “We have nothing left. I wonder if the foreigners couldn’t help me find a place to live with my little brothers and sisters.”

For millions of Haitians, life is divided into before and after.

“Before the earthquake, I went to lycée and Mama gave me everything I needed,” Miselaine says. Her mother Ghislaine was a “ti-marchand”, a pavement vendor of oranges, sweet potatoes and bananas. “On January 12th, she went into the street to sell, and she didn’t come back. I never found her body.” Miselaine feels unable to care for her younger siblings. “We’re alive, but I can’t say I help them, because I have no income,” she says. “When we’re lucky, neighbours give us food. Otherwise we don’t eat.“Mama was good in every way. She spent the whole day outside, but when she came home she stayed with us every evening.”

Profound grief or mourning is the type of depression encountered most often by Dr Marie-Aude Piot, a French psychiatrist who has volunteered to work with Médecins-sans-Frontières (MSF) for three months. “It can be over a close relative, over one’s lost social status or profession. Often it’s material – they have lost everything that constituted their life,” she says.

The symptoms are insomnia, withdrawal, inhibition, loss of that little spark of life which the French call l’élan vital . The French doctors treat it with serotonin capture inhibitors – similar to anti-depressants – and tranquillisers.

Dr Piot sees up to 45 patients a day. Others suffer from intense anxiety, in permanent fear for their lives. They endure flashbacks when they’re awake, and nightmares when they sleep.

In more severe cases, the shock led to a psychotic state, where the personality is “deconstructed”. These patients suffer from delirium, mutism or regression. For example, a university professor treated by Dr Piot has lost the ability to speak.

There are psychosomatic symptoms too, what Dr Piot calls “hysteric conversions”. She has seen at least 25 seizures that resemble epilepsy, but are not epilepsy. “You read about this is 19th-century medical books in Europe, but we don’t see it there anymore,” Dr Piot says.

She believes it stems from Haitians’ rooting in voodoo. Though many scorn the traditional religion, the families of patients who come to her with seizures believe they are possessed by spirits.

Suicide is relatively uncommon in Haiti. “But when they attempt it, they mean business,” Dr Piot says. “They drink chlorine bleach or eat rat poison. We had 26 cases in one week.” Many of her patients talk about suicide but don’t act. “They’re frozen in loss; they see no glimmer of the future,” she explains. “It’s not easy to persuade people to accept such miserable conditions, to help them find that ‘spark of life’ again.”

Before the earthquake, Haiti had only two 40-bed psychiatric hospitals, fewer than 15 psychiatrists and one child psychologist. “When they had mental problems, the poor went to a hougan or mambo [a voodoo priest or priestess]. The middle classes consulted a priest or a pastor. Westernised rich people were the only ones who had the reflex to consult a doctor,” says Dr Piot.

“Mental illness was a taboo issue,” says Jennifer Cornally, the programme officer for the Irish group Trócaire. “People here just didn’t understand it.” Trócaire is linked through the Catholic charity Caritas with the Dutch group Cordaid, which is working to improve mental health care here. Cornally notes that the Haitian health ministry, in concert with the World Health Organisation, is drawing up a new policy that will integrate mental health services.

Until then, the broken survivors of Haiti’s earthquake will continue to line up in the French doctors’ tent.