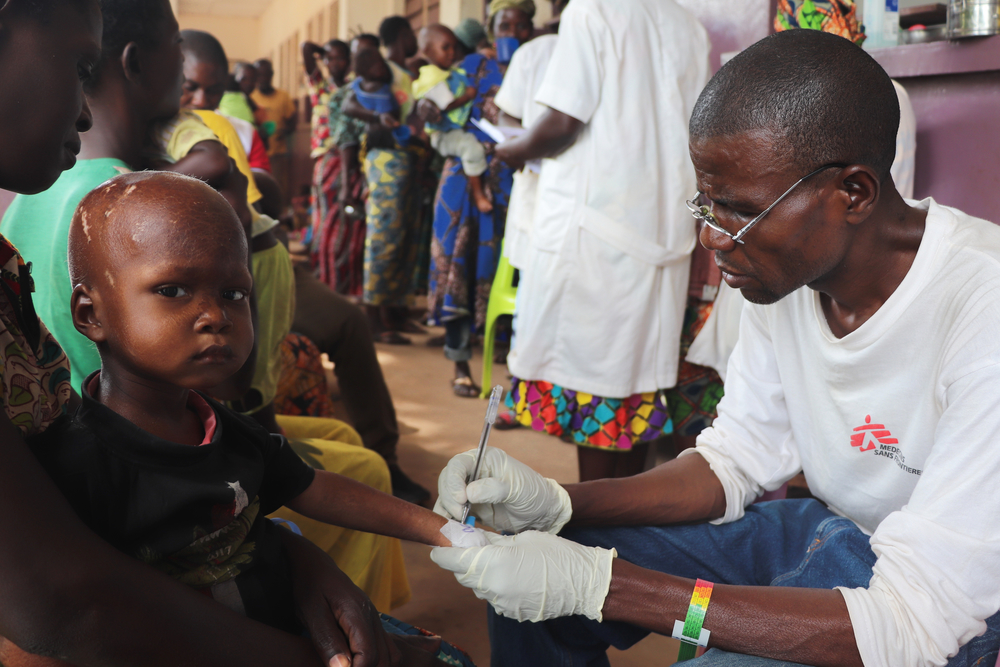 CAR: Improved access to healthcare leads to a sharp increase in malaria and malnutrition patients

Annassagie Fekujuna waits patiently in the nutrition department at Bossangoa’s University Hospital, in Ouham province, in north-west Central African Republic (CAR). The serene smile on her face contrasts with the scene around her; the busy ward is full of severely malnourished children, including her son Juvenal. Annassagie holds her son in her arms, while waiting for the daily distribution of milk to begin.

Malnutrition has been a reality of life in Ouham province and other parts of CAR for years. Recently, however, there has been a huge rise in complicated cases arriving at the hospital, which Médecins Sans Frontières/Doctors Without Borders (MSF) supports. In the first eight months of 2018, MSF had already treated more complicated severe malnutrition cases (721) than throughout all of 2017 (671).

“The increase in the number of patients means that people have better access to health facilities, and that MSF health promotion and outreach activities have been effective in identifying cases and referring them to hospital.”

There are multiple causes behind these cases of severe malnutrition: there is the chronic insecurity in CAR that has repeatedly displaced communities; there is limited access to food or functioning health facilities across much of the country, and the vast distance people must travel to reach those facilities.

In September 2018, the 45-bed nutrition department saw over 80 patients suffering from malnutrition in its ward. “We had to set up tents and hire additional medical staff to respond. I’ve been working at this hospital since 2013 and I’ve never seen this number of patients before,” adds Doutoumbay. 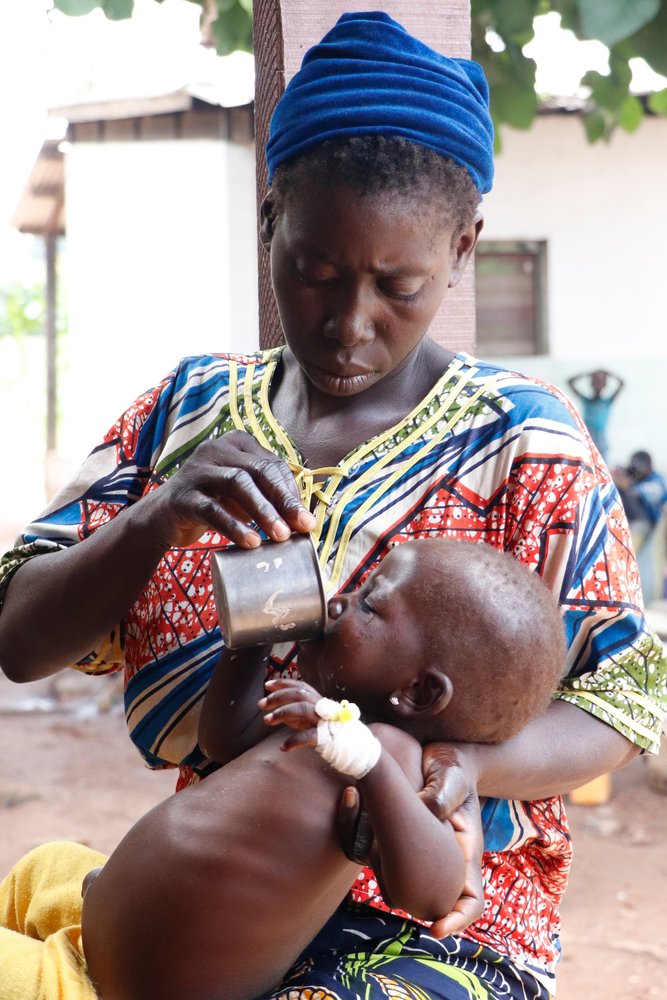 Elisa Fourt/MSF
A woman feeds her son at the milk distribution.

Guillaume Belossou’s son Oscar is severely malnourished. “We first went to a health centre close to our village, but they had nothing to give him; that’s why we walked all the way here,” explains Guillaume. He comes from a village near the town of Markounda, more than 100 kilometres away.

“I know my son suffers from malnutrition. We only eat manioc because we can’t buy anything else. I have 12 children and my wife died two weeks ago. I had to leave all my other children to come here and try to save this one. I hope my child will survive, it’s all in the hands of God.”

The distance to available healthcare facilities is one of the main reasons why so many children in Bossangoa are suffering from severe acute malnutrition. In response, MSF set up a successful referral system that brings more than 200 severe cases to the facility each month by moto-taxi. Without this service, many of these children would never reach the hospital as transport costs are unaffordable for the majority of people living in this area.

In a nearby room at the Bossangoa nutrition department, a young child called Ginasse sips on a cup of milk as his grandmother, Marie Mbora Koméssé, watches over him. They arrived in Bossangoa almost two weeks ago, but Ginasse is so sick that it will take him much longer to recover. “I came here when I saw that the skin on my grandson’s legs was starting to fall off. Because of the pain, he was crying a lot. I wanted to save his life,” explains Marie, putting her hand on her grandson’s head.

“Because of the current conflict, many people in CAR have lost everything. They have been displaced several times, cannot afford to reach health facilities and, for some families, have not had enough to eat,” explains Nathanaël Momba, MSF nurse supervisor. “Often, they are too scared to even leave their homes because of the constant insecurity. But there’s something else: many health centres have been damaged or destroyed in recent years. And when you don’t live in a big town, it is hard to access any health services. This makes it difficult for people to seek proper treatment. So when people arrive in this hospital, they are often already really sick.”

Malaria and malnutrition: the vicious circle

“Malaria and malnutrition are closely linked,” explains Nathanaël Momba. “Every year, when the rainy season starts, the number of malaria cases rises. And when a body, already mildly malnourished, is affected by malaria, it weakens very quickly. A moderate malnutrition becomes acute. It’s like a vicious circle. And when it gets to that stage, our facility is the only place in the region people can be treated. There is nowhere else.”

Malaria is so common in CAR that people sometimes underestimate its terrible consequences. Eighteen-month-old Therence has been diagnosed with the disease for the fourth time. His parents, Méda and Mathuri, anxiously wait for their son to wake up. “He hasn’t eaten anything for the past five days,” says Therence’s dad, “And he is extremely tired. We have both had malaria many times, so we weren’t that scared. But it’s the first time he’s been so sick and now we fear he won’t ever get better.”

Just like the nutrition ward, the paediatric department and the intensive care unit (ICU) are also crowded with young children suffering from malaria. In the first eight months of 2018, the paediatric department treated 49 percent more malaria cases compared to the same period in 2017. 78 percent of the patients they tested had malaria, making a total of 138,675 patients treated for malaria in that period.

In the ICU, Germaine watches over her six-month-old twin sons, Dieu Merci and Dieu Bénit. She first brought them to an MSF mobile malaria clinic in Boguila, a village one-hundred kilometres away, when she noticed that her sons had a fever. Both of them were diagnosed with malaria and sent directly to Bossangoa Hospital “It wasn’t a surprise to me,” says Germaine. “I know the symptoms. They were shivering but their bodies were warmer than normal. I just wish I noticed it earlier.” MSF has recently opened new health posts and mobile malaria clinics in new camps for displaced people, where they have found a high number of patients in need of treatment. 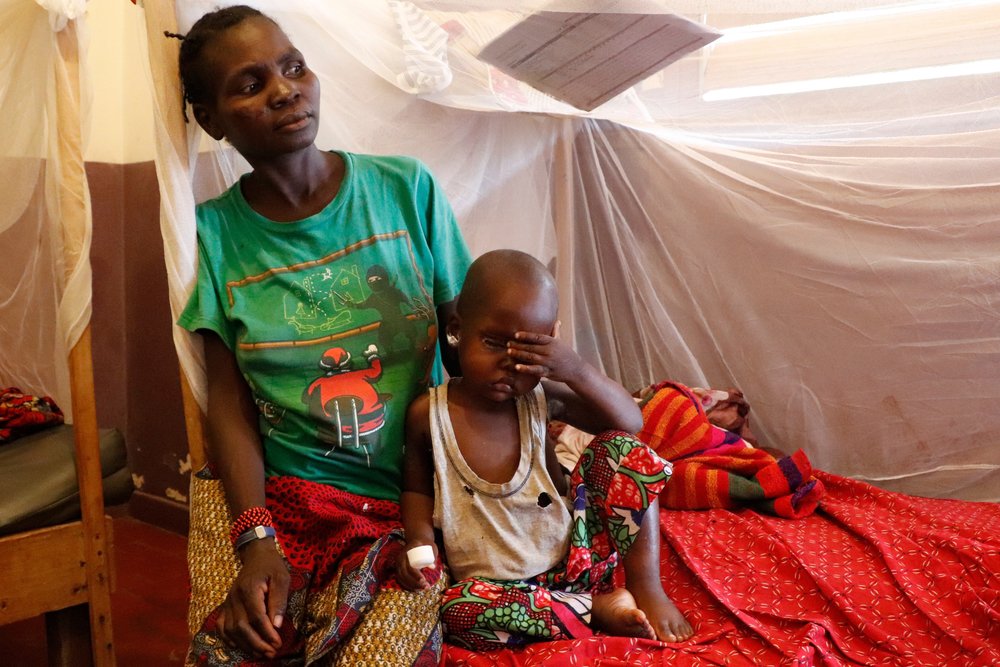 Elisa Fourt/MSF
Marina Robé sits on a bed with her son Ephémère. Originally from Batangafo, they fled to Bossangoa and have lived here since October 2017.

“Malaria kills many more children in this country than weapons”

Despite the challenges, MSF continues to treat patients with malnutrition and malaria, filling the health gaps across the region and shortening the distance people must travel to receive medical care.

“We do what we can, but there’s so much more yet to be done. The population still lacks food, access to healthcare and knowledge about what to do when they get sick,” says Hilaire Doutoumbay. “When people talk about the CAR, they often mention violence as the cause of everything. But they completely forget about the other consequences of the conflict. Lack of access to healthcare is, to me, one of the biggest problems because conditions like malaria and malnutrition kill many more children in CAR than weapons.”

MSF, alongside the CAR Ministry of Health, has been managing the paediatric, nutrition, intensive care, inpatient, maternity and surgical departments at Bossangoa’s Hospital since 2013. The organisation also offers mental health consultations to the hospital’s patients. On the north in Nana Bakassa, MSF supports three health posts – Benzambe, Kouki and Bowaye – as well as a health centre in Nana Bakassa. In Boguila, MSF supports a health centre and three health posts in the surrounding area (Sido, Boaya and Markounda) where the teams provide ambulatory consultations, sexual and reproductive healthcare, vaccination campaigns and manage patients with malnutrition. In 2018, MSF  has treated 112,052 patients with malaria and 1,246 children with malnutrition across the region.

read more about our work in central african republic >