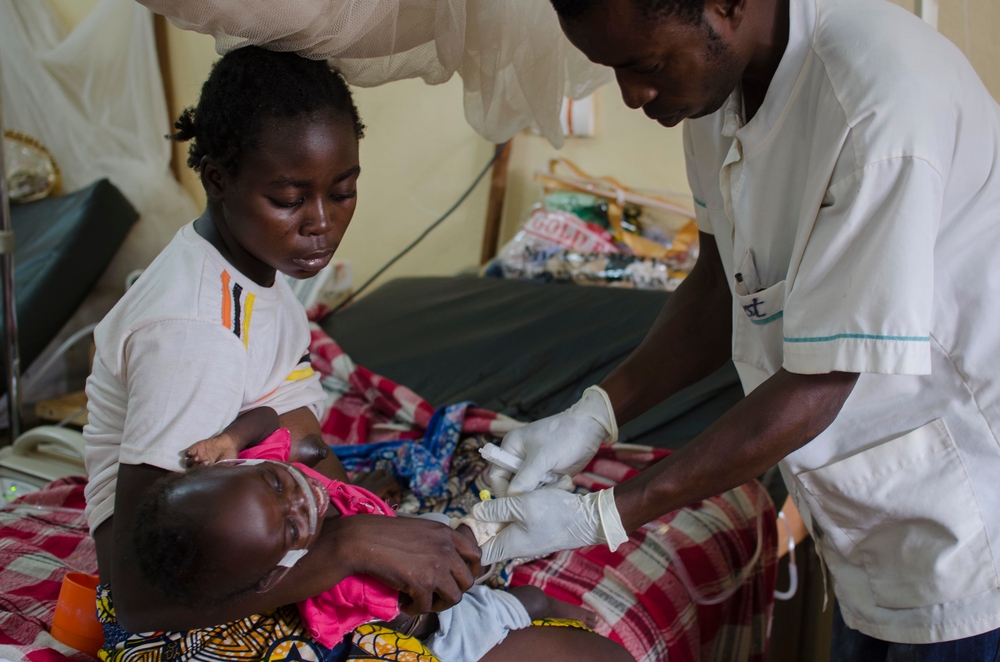 CAR: Providing healthcare amid ‘a terrible mix of violence, displacement and lack of basic healthcare’

Médecins Sans Frontières/Doctors Without Borders (MSF) has started an emergency intervention in Kouango amid ‘a terrible mix of violence, displacement and lack of basic healthcare’.

By the end of 2014, thousands of people living in Kouango area, in southern Central African Republic (CAR), started to cross the Ubangi River looking for safety in the neighbouring Democratic Republic of Congo (DRC) after months of armed clashes in the area between rival militias.

More than 20,000 locals fled to DRC and thousands more went to the nearby towns of Bambari and Grimari, north of Kouango. They were all looking for protection after the incessant robberies, killings and burnt houses.

While MSF teams in DRC took charge of the incoming refugees, an emergency team in CAR has started an intervention focused on children, women and victims of violence in Kouango town and its surroundings.

The local population’s access to healthcare was very limited or non-existent, and there were also huge needs in terms of food, housing and sanitation. Some of those who stayed in the area left their homes to seek refuge in the bush out of fear of militia exactions.

false
Jana Brandt/MSF
A burnt out house near Kouango, CAR

An acute lack of security and healthcare in CAR

“There are still some armed clashes, but simple rumours are enough to keep people afraid and away from home,” said Jana Brandt, coordinator of MSF’s emergency team.

“We have seen some areas where all there is are burnt houses.” Brandt added.

“There are no security forces or actors providing healthcare. People are living in very dire conditions that could get worse at any moment if the insecurity persists.

On top of that, the rainy season is about to start and people living in forests are completely exposed to harsh weather. Villagers even risk their houses being destroyed if they cannot come home soon to prepare them for the heavy rains to come.”

“What we are seeing here is an example of the situation that hundreds of thousands of people suffer in CAR every day: a terrible mix of violence, displacement and a lack of access to even basic healthcare,” she stated.

false
Jana Brandt/MSF
A common sight: Looting of a health post in Gouasse

The provision of outpatient care for malaria

In the first week of activity the mobile clinics performed more than 400 consultations, the majority of which were in relation to malaria.

Movements in the area are extremely difficult because of the lack of a decent road network.

This same lack of connections is an added hurdle for trade and supply in the area, as are the checkpoints installed by the armed militias to ask traders for money, that even the river transports have to face.

A real threat of food insecurity is on the horizon

An additional problem arises from the fact that the nomadic pastoralist populations that have traditionally come to the area to feed their herds now have to face the militias and their control of traditional routes, forcing them to go nearer to the villages where their cattle feed on the farming lands, which results in an even worse food scarcity.

“It’s very difficult for farmers to work in their lands and pastoralists have all kinds of hurdles themselves. With this scenario, a situation of food insecurity in the mid-term is foreseeable,” said Brandt.

MSF’s mobile clinics are providing primary healthcare with outpatient consultations in different spots of the area and special attention is be given to cases of malaria, diarrhoea and respiratory infections.

A 24/7 emergency room will also be set up in Kouango, and surgery will be available for those urgent cases in which evacuation is not advisable for reasons of security or time.

Since December 2013 and in response to the crisis, MSF has doubled its medical projects and currently runs around 20 projects, including several for Central African refugees in neighbouring countries such as Chad, Cameroon and the Democratic Republic of the Congo.

In Equateur province (DRC), MSF teams have focused their assistance on nutrition and primary and secondary healthcare for Central African refugees.

In Bili hospital, MSF is supporting the paediatric and maternity wards and emergency surgery is performed. Almost 7,500 consultations were performed in March, half of them for CAR refugees.

A vaccination campaign has been carried out and 43,000 children were vaccinated against measles and around 20,000 against polio.