“I reached the light at the end of the tunnel,” says Fatima*. “I wanted to die. But here I am, alive and grateful,” says Abdul Karim.

Fatima and Abdul Karim’s words sum up the long journey they embarked on while receiving mental health treatment and support. They are both currently continuing treatment in Médecins Sans Frontières’ (MSF) mental health clinic at Al-Gomhouri hospital in Hajjah city, northwest Yemen.

Abdul Karim, 48, is a father of four. He lost his ability to work and support his family and isolated himself after experiencing a traumatic event. He started to suffer from extreme fear and anxiety. 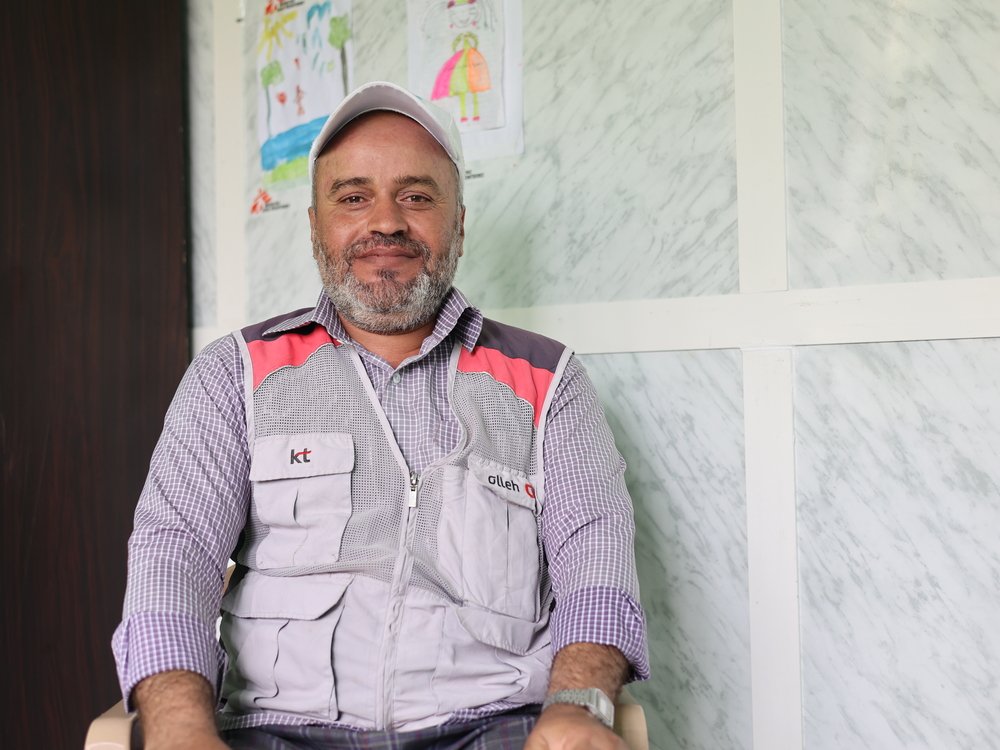 “I started to question everyone around me. I couldn’t trust anyone. I considered everyone an enemy. I didn’t want to be around anyone and slept for long hours,” he says. “I was lost and felt that life isn’t worth living anymore.”

Abdul Karim's children and wife were his way out of his suffering. His wife talked him into seeking treatment. He used to travel more than a hundred kilometres from Hajjah to visit a doctor in Sana'a since mental health services were not available in Hajjah and its surroundings areas. 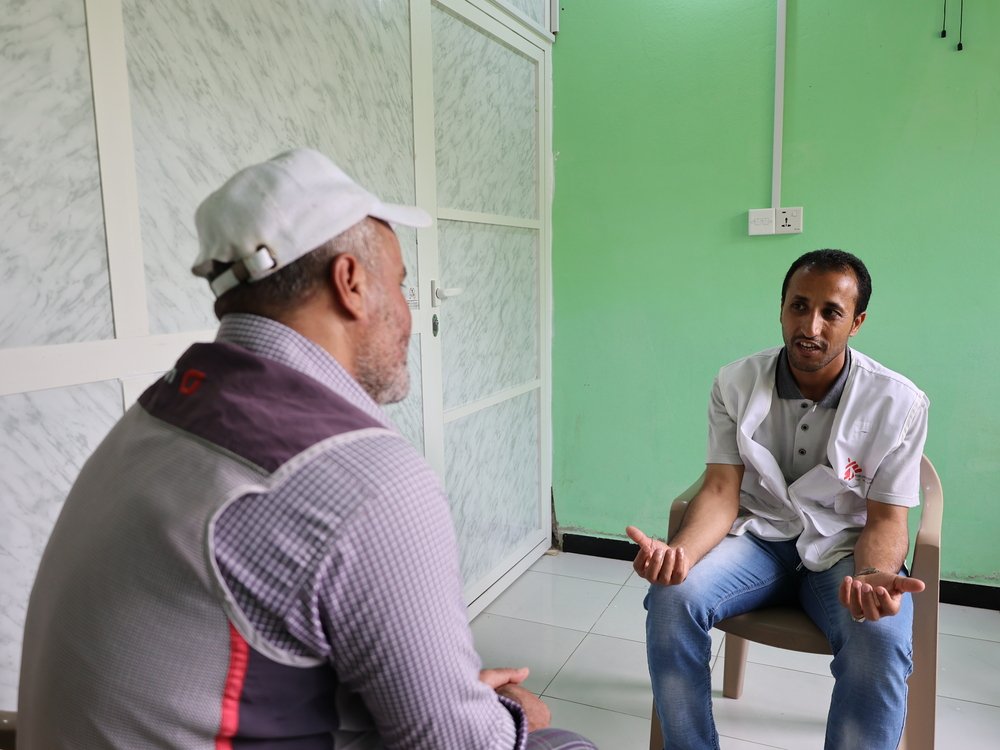 “The psychiatrist prescribed a treatment, and I used to visit him once a year. The treatment and transportation were expensive, and I couldn't afford them regularly,” says Abdul Karim. “When I discovered that MSF provides mental health care in Hajjah, I started coming to the clinic every month and I have been going there for the past two years.”

MSF is offering a holistic mental health program in a clinic in Al-Gomhouri hospital in Hajjah city in collaboration with the Ministry of Health. The program includes psychological care, psychiatrist treatment of severe mental health disorders, and psycho-education group sessions. 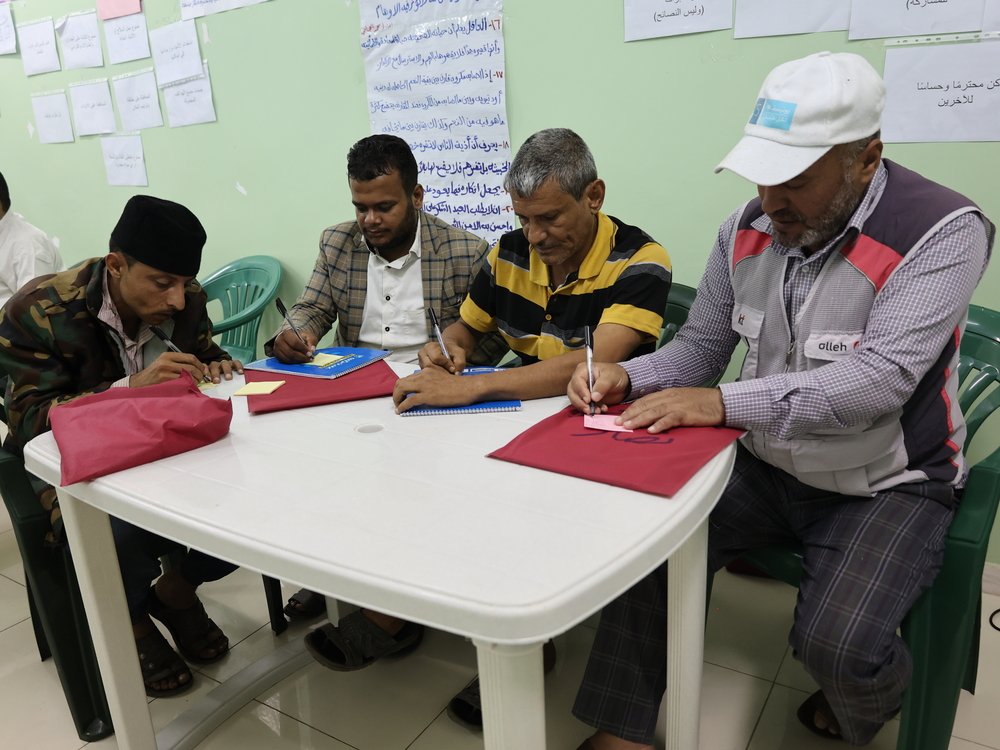 Jinane Saad/MSF
Males’ group session organized at the Day Care Center that MSF launched in April 2022. This session provided by MSF psychologists Nayef and Hisham is addressing self-care and a healthy diet.

“We receive patients suffering from various mental health disorders, with symptoms ranging from mild to severe, such as anxiety, depressive episodes, post-traumatic stress disorder, and behavioural problems and we provide them with psychosocial care," says Aura Ramírez, MSF’s mental health activities manager. "However, most patients arrive with severe conditions such as major depression, psychosis and bipolar disorder, that require psychiatric treatment in addition to psychological care. These patients amount to 70 to 80 percent of our patients.”

Fatima*, 33 and a mother of five, suffered from severe hallucinations and constantly heard voices that made her cry, scream and act violently with her children. Sometimes, she couldn't even recognize them. Fatima went through a divorce due to her mental health condition and moved from her husband’s house in Sana’a to her parents' house in Hajjah. Her siblings took her for treatment in a clinic, which closed after a while. This was before she heard about MSF's clinic in Hajjah. 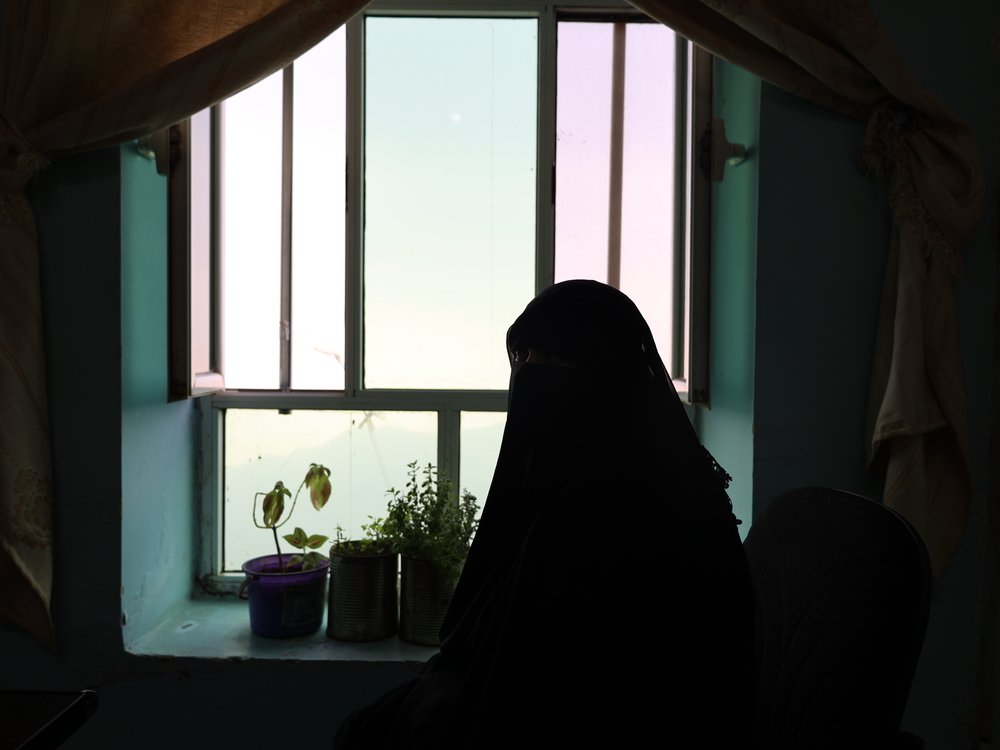 “I could not be a mother to my children, a daughter to my parents, or a sister to my siblings,” says Fatima. “I was a hopeless case. No one accepted me. I sat in the dark most of the time, and it was an absolute headache for my family. I turned their joy into sorrow on any occasion.”

Most people with mental health issues in Yemen often seek support and treatment at a late stage when their symptoms already impacting their and their families' lives. This can be attributed to many factors. 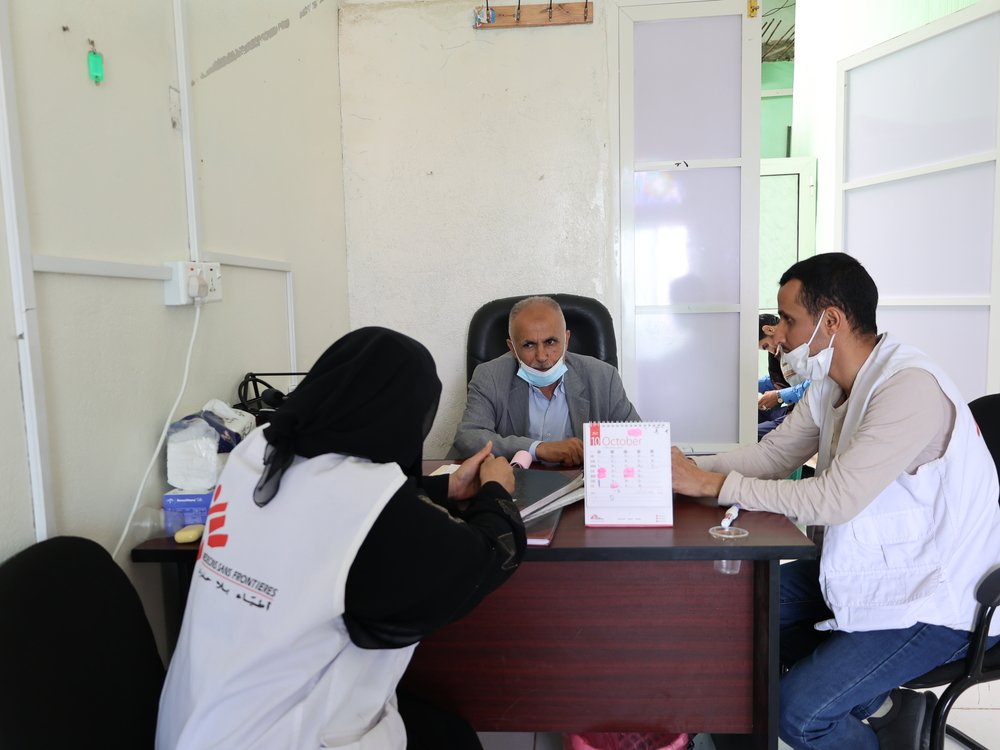 “Many patients don’t recognize the early symptoms and only become aware of them at a later stage. This is largely due to the lack of awareness of mental health disorders and the cruciality of treatment,” explains Muaadh Abdul-Ghani Al-Samawi, the supervisor of the mental health clinic in Hajjah. “Some associate mental issues with jinn and sorcery and resort to other traditional means before seeking support at the clinic. Linking mental illness to madness and stigmatization also further discourages the patients and their families from seeking help,” he says.

The mental health clinic in Hajjah receives about 400 patients per month, 50 to 90 of whom are new. Men amount to around 70 per cent of the patients we receive at the clinic, which indicates challenges facing women to access mental health services, some of which might be related to social and family restrictions. Women need the support of their husbands or families to receive treatment. In response, MSF teams work to raise awareness and highlight the importance of mental health care in the communities by conducting regular education sessions in various departments of Al-Gomhouri hospital for the patients, their families and visitors. 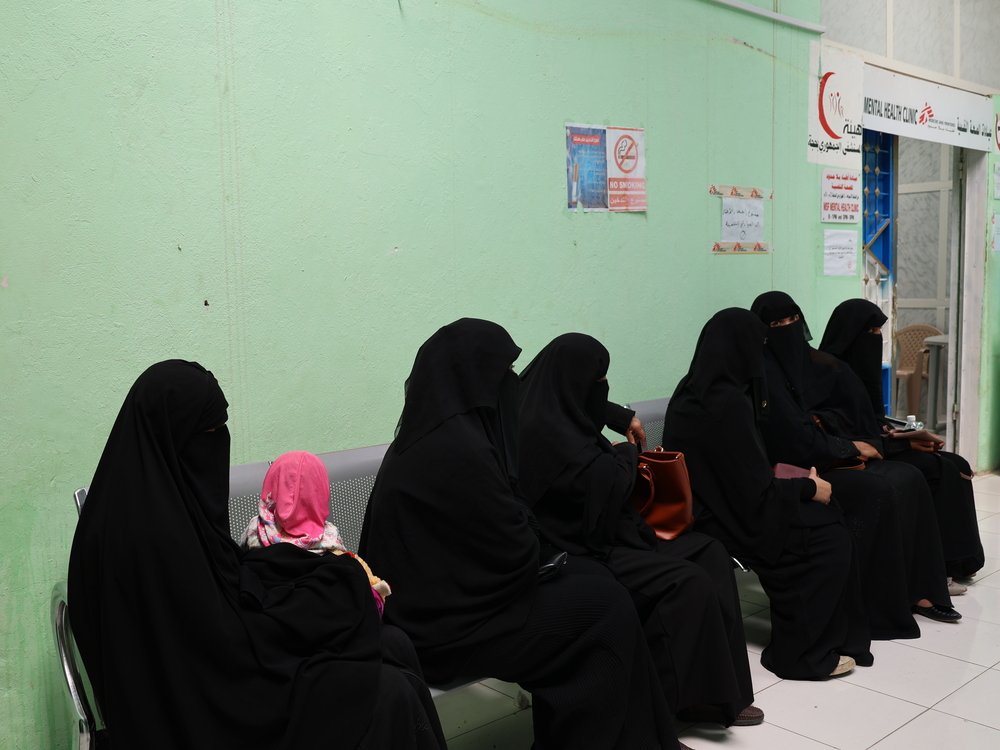 Jinane Saad/MSF
Women amount to around 30 per cent of the patients we receive at the clinic, which indicates challenges facing women to access mental health services, some of them might be related to social and family restrictions. Women need the support of their husbands or families to receive treatment.

“The long years of war, which resulted in the destruction of homes, loss of lives, displacement of thousands, and deterioration of economic and living conditions have taken a toll on the mental health of the people in Yemen. Many people have lost their loved ones or their jobs and can’t access basic services,” says Muaadh.

“People also struggle with family issues and traumas. The conflict and lack of access to mental health services also leaves a significant impact on the patients who already suffered from chronic mental health disorders before the onset of the war,” he says.

In view of the great need for mental healthcare services and the lack of psychiatrists in Yemen and the Hajjah governorate, MSF is implementing the “Mental Health Gap Action Program” (mhGAP) through its clinic in Hajjah. This program, launched by the World Health Organization, aims to increase the ability of the healthcare system in providing holistic mental health care.

“As part of the MHGAP, we trained the general practitioners on diagnosing, providing psychosocial care and prescribing medications for some patients with mental disorders under the supervision of a psychiatrist, thus facilitating access to mental healthcare services for people in need,” Aura says. 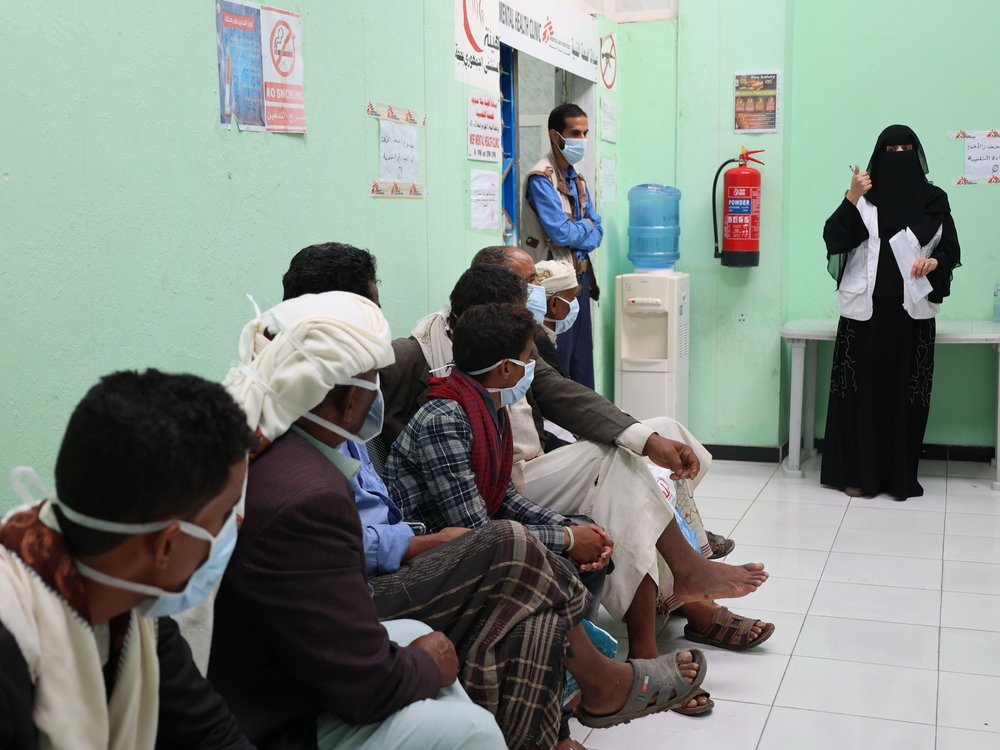 Jinane Saad/MSF
MSF is offering a holistic mental health program in a clinic in Al-Gomhouri hospital in Hajjah city in collaboration with the Ministry of Health. The program includes psychological care, psychiatrist treatment of severe mental health disorders, and psycho-education group sessions. We receive about 400 patients per month, 50 to 90 of whom are new.

Fatima is currently receiving both psychological support and medical treatment provided by a clinical psychologist and a MHGAP doctor. She also participates in the women's group sessions organized in the Day Care Center (DCC) launched by MSF in April 2022. The DCC offers psychological care and a rehabilitation program for patients with chronic mental health conditions who have achieved stability due to their commitment to treatment. It empowers them to improve their social interactions and increase their functionality. The program offers therapeutic, recreational and psycho-educational sessions to rebuild patients' capacities to reintegrate into society. It also helps to restore some of their skills such as self-care and communication, especially since most of them are no longer able to complete simple daily tasks. During the DCC, patients are encouraged to build a routine, create a daily structure and adopt some basic behavioral rules that help them to adjust to a social framework.

“These sessions provided me with information and helped me rely on myself. I became an independent woman after having depended on people for so long. I restored my self-confidence and I’m now able to complete my day-to-day activities. I pray, read the Quran and exercise. I also help my mother and siblings with housework and take care of my children,” Fatima says. 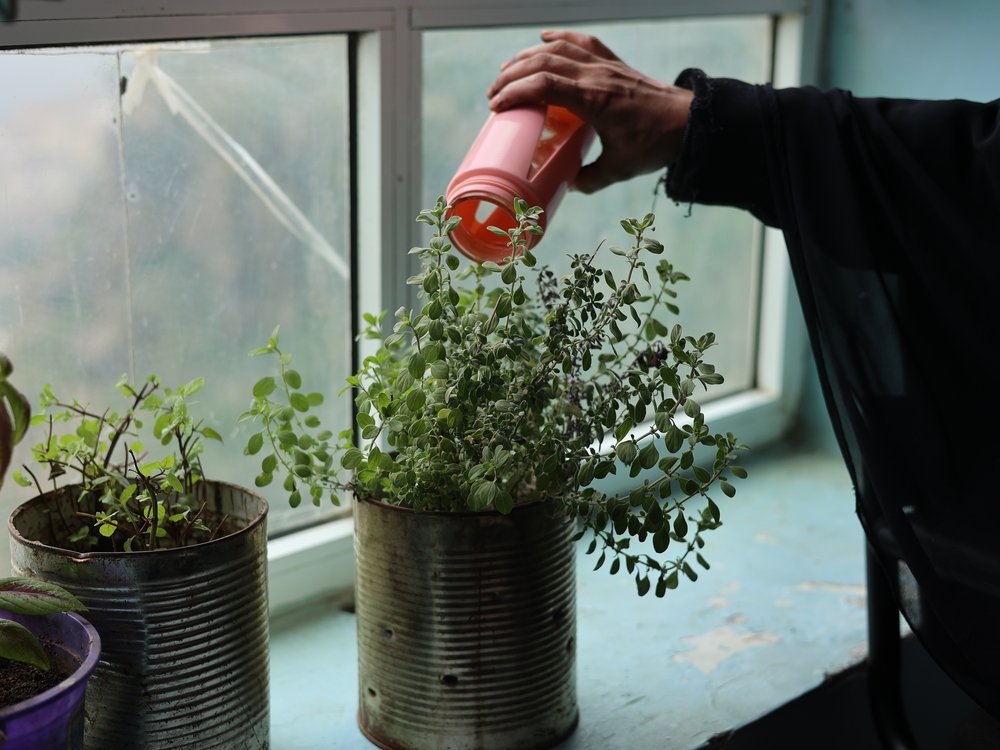 Jinane Saad/MSF
Fatima is currently receiving both psychological support and medical treatment provided by a psychologist and a doctor. She also participates in the women's group sessions organized in the Day Care Center launched by MSF in April 2022.

“I consider this place as my second home. These people are my family,” says Abdel Karim who participates in the men's group sessions at the care centre. "It changed my life. I am no longer the person I was a few years ago. I got my job back, and my life is back on track. After having isolated myself for so long, I started taking walks and visiting my friends and family. I attend these sessions three times per week. My story is a living proof that hope still exists.”

While hope for a normal life is not lost for mental health patients and their families, the lack of mental health services in most Yemeni cities and villages deprives many patients of the opportunity to receive treatment and exacerbates their mental health conditions. This can be attributed to the collapse of the health system and the absence of support for mental health programs at primary healthcare levels.

“We receive patients from several districts surrounding the city of Hajjah, as our centre, in addition to the mental health department run by MSF in Abs General hospital, are the only mental health services available in Hajjah governorate,” says Muaadh. 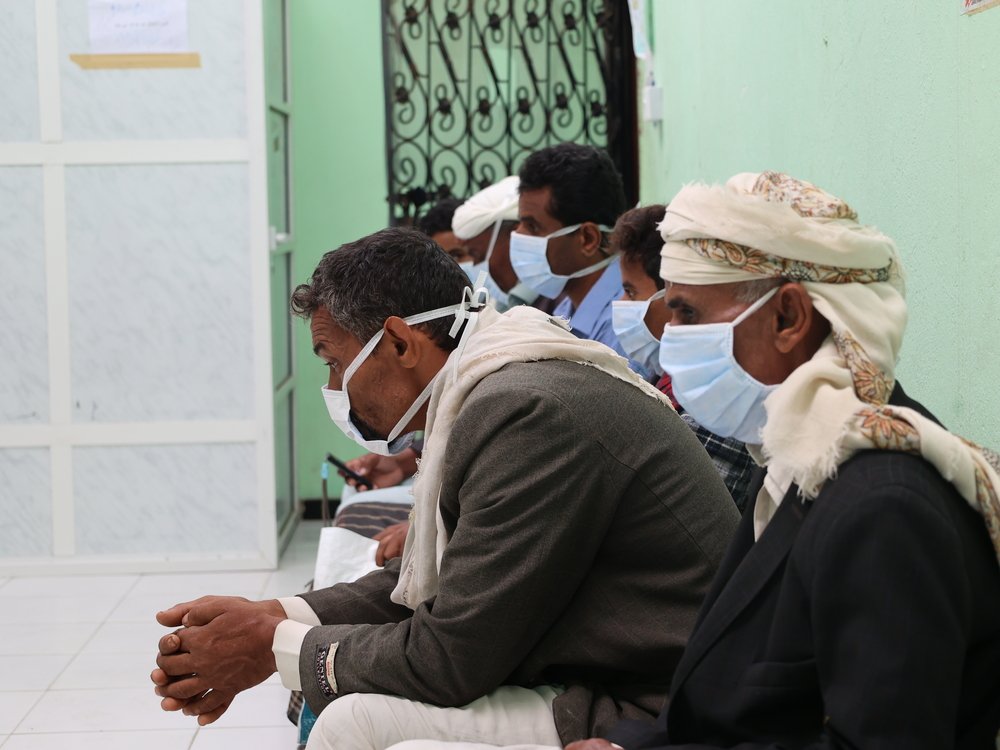 Jinane Saad/MSF
MSF is offering a holistic mental health program in a clinic in Al-Gomhouri hospital in Hajjah city in collaboration with the Ministry of Health. The program includes psychological care, psychiatrist treatment of severe mental health disorders, and psycho-education group sessions. We receive about 400 patients per month, 50 to 90 of whom are new.

“Despite our services being free of charge, the distance and transportation costs affect the patients' ability to adhere to the appointments, and consequently to treatment. Many patients stop coming for months until they save money to pay for transportation, and this affects possibilities of improvement. We are currently looking into ways to facilitate access for mental health services to people in need through providing mental health consultations by phone,” he says.

From her side, Aura highlights the achievements made by the team despite the great challenges: “Eighty per cent of our new patients learn about our activities and come to seek care at our clinic, based on a recommendation from one of our patients himself or a member of his family. This is very rewarding for us, as it reveals an appreciation of the quality of care we provide in our clinic.”

“I would like to address the people who are going through the same thing and tell them to pave their way through life again, talk about your feelings, seek treatment and psychological support, and commit to it. Your lives will soon get back on track, just like mine did.”

“I would like to address the people who are going through the same thing and tell them to pave their way through life again, talk about your feelings, seek treatment and psychological support, and commit to it. Your lives will soon get back on track, just like mine did,” says Abdul Karim.