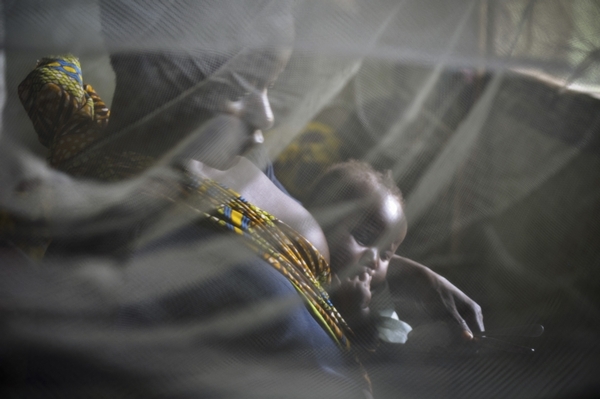 The increase in the conflict between armed groups since early April has led to population displacement, trauma wounds, and greater morbidity and mortality from certain illnesses for the populations affected by this instability.

“In the last several weeks, we have seen an increase in cases of malnutrition, respiratory infections and STIs, in addition to treating or providing support to more than two dozen patients directly wounded from the fighting,” reports Corry Kik, MSF Medical Coordinator in North Kivu.

The mother of one four-year old patient with Kwashiorkor malnutrition spoke about the effects of this increased instability on the general population.

“I arrived today at the hospital with my daughter who is suffering from severe malnutrition. We live in a village three hour’s walk from here.

Because of the insecurity over these last few weeks we no longer sleep in our house but in the fields or in the bush. During the night, bandits attack the village and during the day there are military clashes. It is difficult to find food with the bullets flying, and preventing us from going to the fields.”

An MSF surgical team working in an inflatable operating theatre in a clandestine field hopsital in northern Syria. MSF has three hospitals in the northwest of the country and has performed 900 operations to date. Syria 2012 © MSF
A young child with severe malaria recovers in the Intensive care Unit (green bracelet) She comforts her younger brother who is thankfully not sick.Democratic Republic of Congo 2011 © Raghu Venugopal/MSF

Other patients have been directly wounded by armed violence, such as Momo,* who was transferred to an MSF-supported hospital along with five other patients.

“I decided to leave my home and travel to Goma to see my family and take care of some business. I left on a taxi with 20 other passengers at about 7:00 in the morning. Ten minutes after we left I heard a series of whistles and then 30 seconds later the shots began to ring. I was hit by two bullets in my right leg and one in my left. The four masked men did not even try to stop the vehicle before shooting.

My greatest wish is for this war to end and that people will speak to each other and resolve their conflicts because it is the population who is suffering from these clashes.”

In spite of the additional logistical challenges to moving patients, staff and supplies, the majority of MSF teams remain in the field and are continuing to provide healthcare to all patients, while donating extra supplies to nearby health centers as needed.

“Although we are seeing an increase in difficulty of access, we have been able to keep operating in our project locations and maintain the resources and space to treat the patients in greatest need,” says Médecins Sans Frontières (MSF) North Kivu Head of Mission, Christine Buesser.

This growing conflict in North Kivu places an additional burden on populations that are already struggling to access health care and treatment.

In North Kivu province, MSF provides primary and secondary healthcare throughout the region, providing support to reference hospitals in Mweso, Pinga, Masisi and Rutshuru and to health centers, mobile clinics and health posts in Kitchanga, Mweso, Pinga, Masisi and Rutshuru, and cholera treatment centers (CTC) in Goma and surrounding areas. Emergency teams regularly evaluate and respond to needs in other areas.

Due to a series of grave security incidents, in April 2012 MSF decided to evacuate from Nyanzale and Butembo, and significantly reduced their teams in Rutshuru. However, during this time the organization also returned to full operations in Masisi, after a five month’s absence due to an attack on the MSF base in which one staff member was seriously injured.