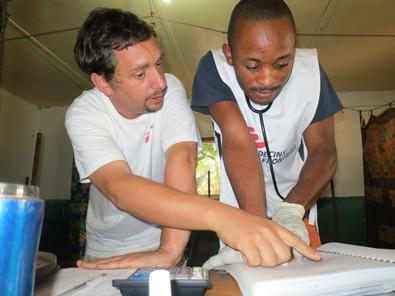 Clashes between Mai-Mai militias and governmental forces have been rocking the area around Shamwana, Katanga province, in eastern Democratic Republic of Congo (DRC) since November of last year. Villages in the area have been burned to the ground, and people have fled to neighbouring villages or into the bush.

As people flee from destruction, harassment and intimidation, Médecins Sans Frontières/Doctors Without Borders (MSF) calls on armed groups in Katanga province to respect and ensure the safety of civilians and allow them to access the healthcare that they need.

In November and December, villages along the roads between Shamwana town and Dubie, Mitwaba and Mpiana were burned. The destruction continued, with the villages of Lenge, Nkonkole, Lubinda, Kabwesungu and Kilambwilu burned between 25 December and 1 January.

Hundreds of people have fled in fear, leaving their homes, businesses and belongings behind to seek shelter in surrounding villages and in the bush. The extent of the displacement is hard to quantify, but hundreds of families have sought refuge in at least eight nearby villages.

On top of the large-scale destruction and displacement, some of those who fled have been intimidated or coerced into relocating or returning to their villages by armed people.

The displaced people are particularly vulnerable, having been confronted with fighting and harassment for some months running. To make matters worse, the rainy season has begun, and many people will be sleeping outdoors without shelter from the elements.

“We’re concerned that significant numbers of vulnerable people are not able to access the medical care and humanitarian assistance they need,” says Thomas Mollet, MSF head of mission in Katanga.

At Shamwana hospital, where MSF is providing a range of health services, teams have seen falling patient numbers compared to previous years, suggesting that people are now going without medical care.

In November, our teams saw 30 percent fewer patients for outpatient consultations than in the same month the previous year.  In December, 18 patients receiving long-term care for HIV and tuberculosis at Shamwana hospital did not return for further essential treatment.

“If people aren’t able to access healthcare, it will surely cost lives. Complications during labour can be fatal for pregnant women, and severe malaria is deadly for children if left untreated,” says Mollet.

“Armed groups in Katanga province, including the national army, must respect and ensure the safety of civilians and allow them to access the medical services that they need.”

MSF continues to operate in Shamwana hospital despite the ongoing fighting and the deteriorating security situation there. Teams are also running mobile clinics, carrying out water and sanitation activities and distributing bed nets in the area.

Dubbed the “Triangle of Death”, the region has a violent history: in 2005, violent clashes between Mai-Mai militias and the army in this part of Katanga province resulted in many people being killed, raped, injured or displaced. The past few years has seen tensions flare up again and MSF has struggled under difficult circumstances to continue its medical activities in the area.