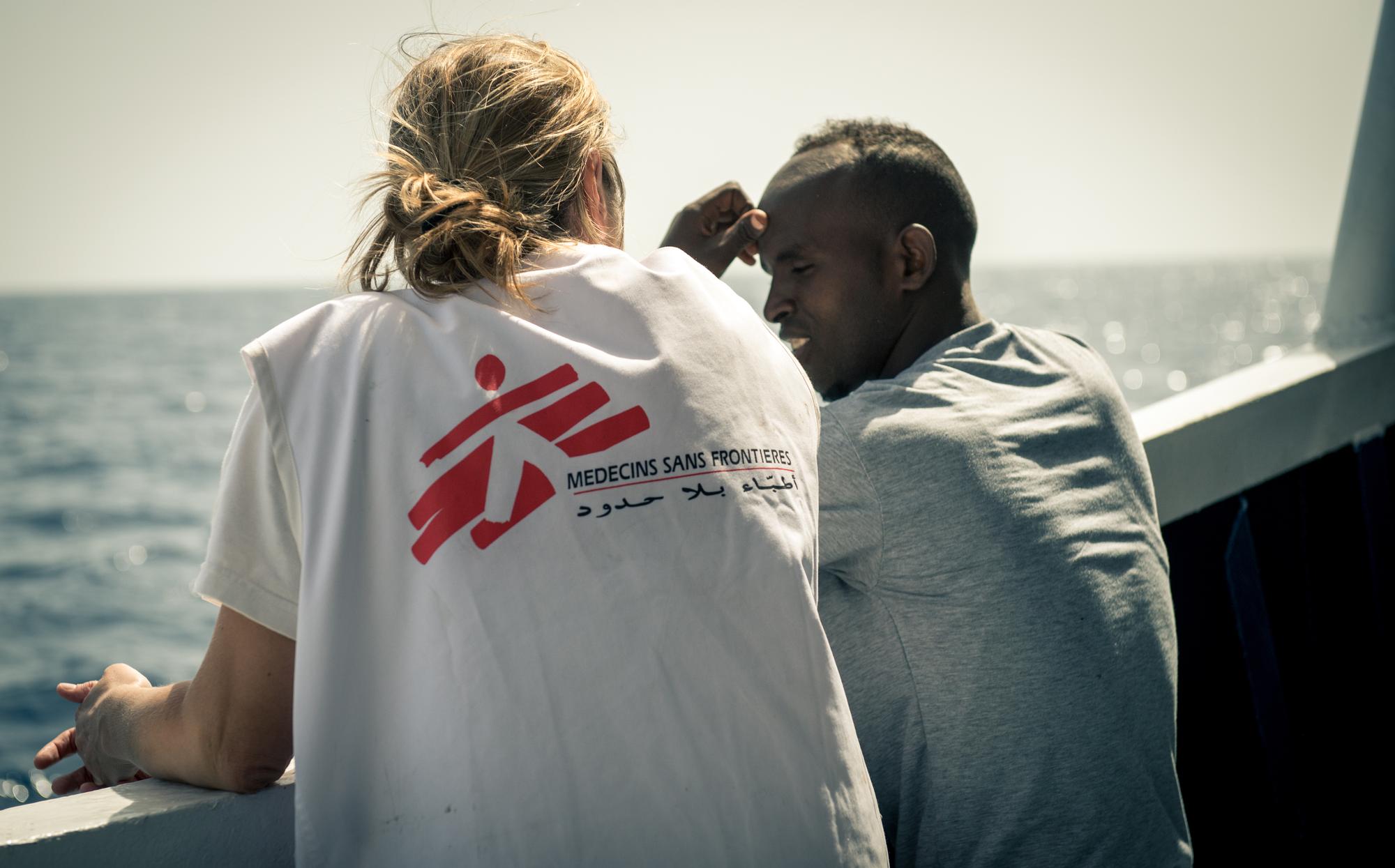 Dying to reach Europe: Eritreans in search of safety

The dangerous journeys that tens of thousands of Eritreans are making across both desert and sea to try and reach Europe are a striking example of how restrictive migration policies are having a devastating impact on people seeking safety outside their countries of origin.

A new report released today by Médecins Sans Frontières/Doctors Without Borders (MSF) is based on the first hand testimonies of refugees who have fled the small but highly militarised east African country, reporting a lack of freedom and forced military conscription for years or even decades.

Defectors are at risk of being rounded up, imprisoned, tortured or killed.

“Ninety percent of Eritreans who manage to reach Europe over land and sea are granted asylum. European governments recognise their claims as genuine but despite this are doing all they can to prevent them and others seeking asylum from reaching EU shores” said Arjan Hehenkamp, Médecins Sans Frontières General Director. 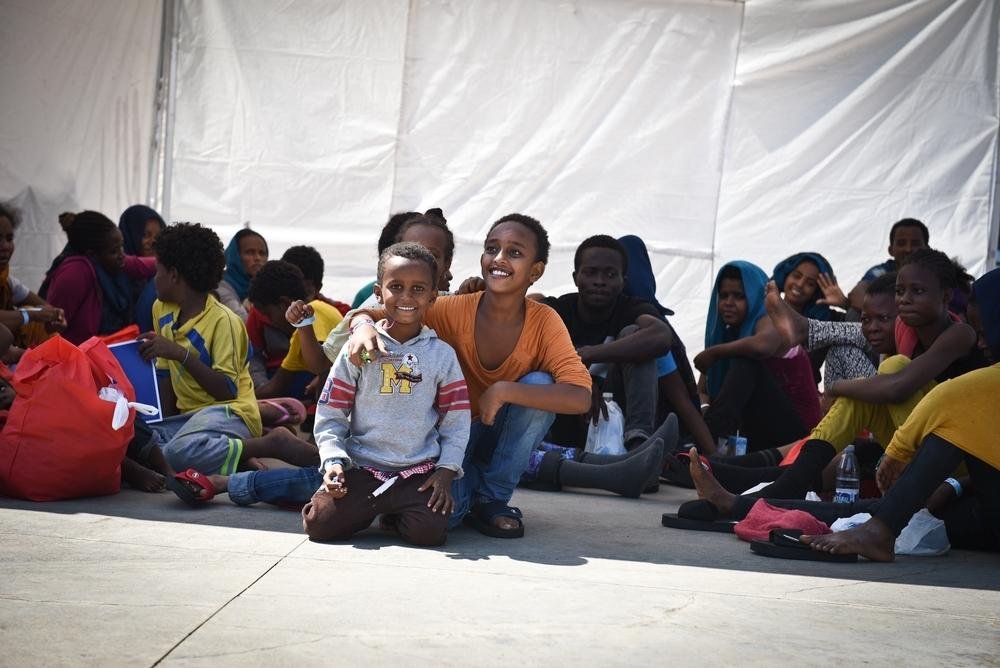 Sara Creta/MSF
Jossef (5) and Nahir (7) from Eritrea on board of Dignity I after a rescue in September, 2016.

On a daily basis, MSF teams witness the harrowing medical and humanitarian consequences of increasingly restrictive approaches to migration management. In the case of Eritreans, MSF teams directly assisting refugees from Eritrea in programmes in Ethiopia, Libya and on the Mediterranean Sea see medical conditions including heavy scarring, wounds and severe psychological illnesses consistent with people’s testimonies.

Every Eritrean interviewed has reported being held in captivity of some kind, while over half have reported seeing fellow refugees, asylum seekers or migrants die, most often as the result of violence.

They witness the hopelessness of confinement to refugee camps in Ethiopia where people are completely dependent on aid to survive. In Sudan access to protection and assistance is inadequate while Eritrean refugees risk being detained and deported back to Eritrea. Rather than wait out their lives, many feel they have no choice but to risk physical, psychological and sexual violence, arbitrary detention and deportations in Libya and a dangerous sea crossing in the hope of eventually reaching safety and freedom in Europe. 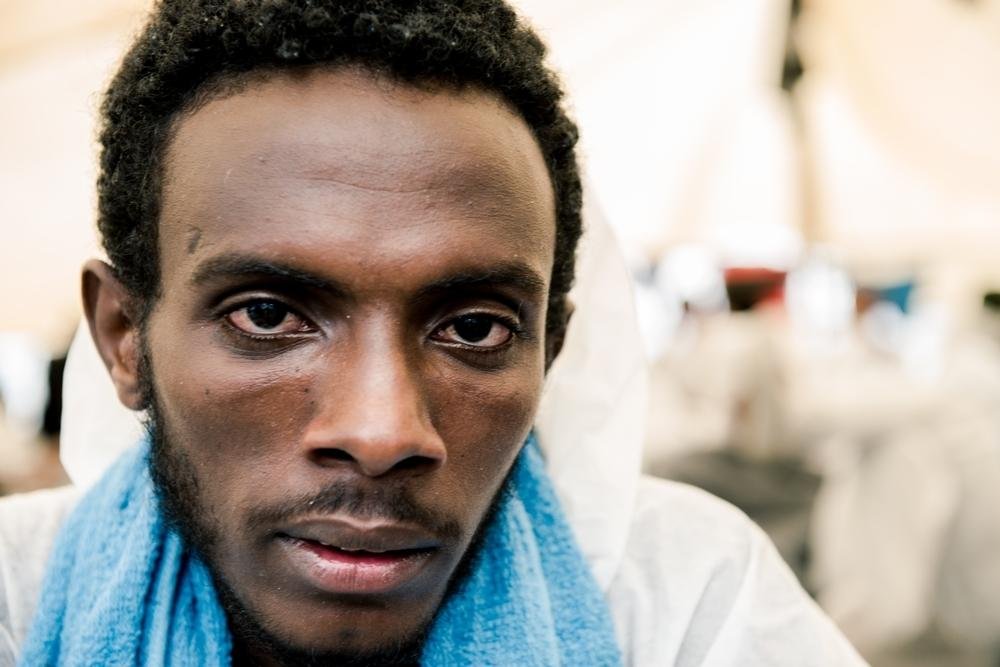 Gabriele François Casini/MSF
20-year-old Fresghy left Eritrea without telling anyone. More than a year later he found himself imprisoned in Libya. His only chance of release was if his relatives could raise the money to pay off his captors.

In 2015, Eritrean refugees were the largest group crossing  the Mediterranean when 39,162 men, women and children arrived in Italy. In 2016, Eritreans were the second largest group with 20,718 people rescued from overloaded blue wooden fishing vessels and brought to Europe.
Rather than developing safe and legal routes for those seeking international protection, the EU is increasingly collaborating with Eritrea, Libya, Sudan and Ethiopia to prevent Eritreans from leaving Eritrea and transiting through these countries to reach Europe.

The EU’s attempts to stem migration through strengthening national borders and bolstering detention facilities outside its borders leave people no choice but to pay smugglers to get them past checkpoints, across borders, through fences, out of prisons and ultimately onto boats on the Mediterranean Sea. 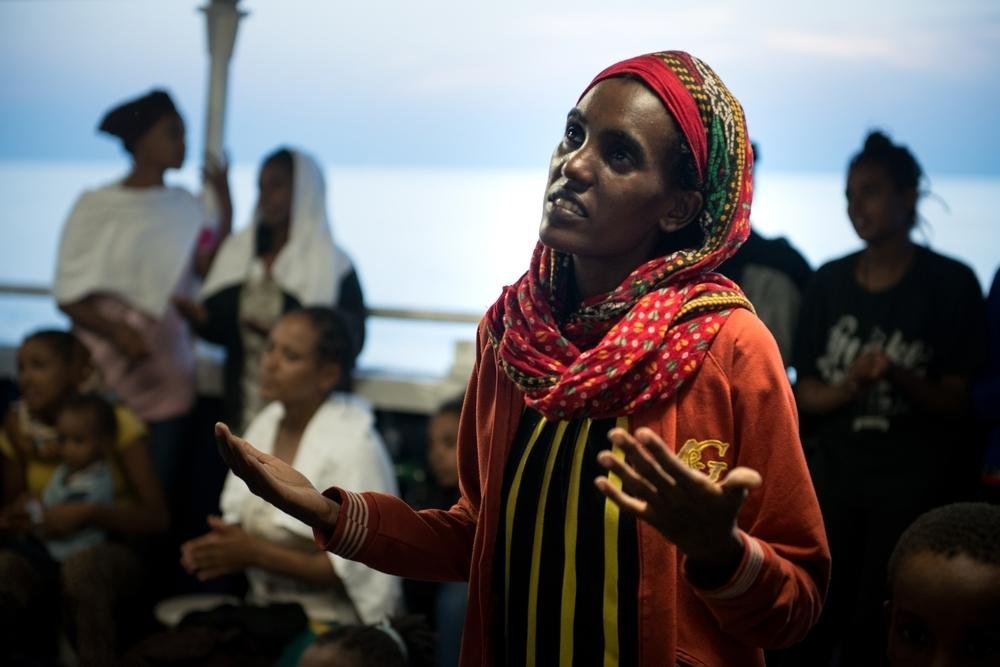 Gabriele François Casini/MSF
An Eritrean woman singing a prayer with other women and children after being rescued 02 September 2015 by the MSF MY Phoenix search and rescue vessel at sea.

Every Eritrean interviewed by MSF teams on its search and rescue vessels in the Mediterranean Sea have reported being either a direct victim or a witness to severe levels of violence, including torture, in multiple locations throughout their journey.

“It is vital that the EU, member states and other governments provide channels to safety and protection for Eritreans, and indeed all people fleeing conflict and persecution. Efforts to manage migration should not externalise border controls to unsafe countries or make aid funds conditional on preventing migration. People seeking protection must not be abandoned or left trapped in unsafe places, with no option but to risk their lives on a perilous journey. Containment is not the answer; migration policies should never trap or force people into danger. Appallingly, current policies do just that,” said Hehenkamp.