From emergency to recovery: Mozambique one month after cyclone Idai

Cyclone Idai swept through the Mozambique port city of Beira and the surrounding districts on the night 14 to 15 March. High winds and flooding it unleashed killed at least 602 people in Mozambique and left many more injured. Thousands of homes, schools and health centres as well as essential infrastructure were damaged or destroyed. Many families were left homeless and without reliable access to shelter, clean water, electricity or food.

As the storm that was to become Cyclone Idai gathered force over the ocean east of Mozambique, the Médecins Sans Frontières/Doctors Without Borders (MSF) team in Beira began preparing for the worst. Medications were stacked high on the shelves so they would not be destroyed by flood waters, and sand bags were placed around supply containers to keep them safe and dry. The pharmacy, warehouse, offices and living quarters were all made ready just in case.

“We asked our Mozambican staff to take the same precautions at home; to stack their belongings high up on the shelves, protect the windows and make plans to evacuate if needed. But none of us really had any idea what was coming,” said Gabriele Santi, MSF project coordinator in Beira.

News of the devastation only began to emerge days later, once mobile phone service was partly restored. Only then did the international MSF team – who had been evacuated from Beira only to be trapped by high flood waters in Chimoio, some 200 kilometres away ‒ begin to receive messages from their teammates sent during the cyclone. One staff member had spent the night on top of a plastic table with his whole family as flood waters rushed through their home, another had her roof blown away, and a third was stuck in the capital, Maputo, afraid that his family in Beira had died.

As soon as Beira airport reopened on 16 March, MSF sent an emergency team from Maputo to check on our staff and assess the needs of the wider community and rapidly deployed additional medical and logistical staff as well as sent in supply from Maputo, Brussels and Dubai.

Fears of a widespread cholera outbreak

For many years Beira residents have suffered outbreaks of cholera towards the end of the rainy season. Given the structural damage to the water system and mass flooding brought by Cyclone Idai, an outbreak this time was almost inevitable. Knowing this, MSF quickly began working with the Ministry of Health to isolate and care for patients with suspected cholera in two city health centres beginning on 21 March.

“At first we were treating up to 200 patients a day in just one cholera treatment unit,” recalls Quezia Monteiro, an MSF infectious diseases specialist who normally runs an advanced HIV clinic at the Munhava Health Centre, but worked as part of MSF’s cholera response for several weeks.

“In those early days, the triage area was constantly full of people that had collapsed with dehydration. Our nurses worked non-stop, finding vein after vein, making sure every patient had the lifesaving rehydration they needed. The worst affected were as always the most vulnerable; children, pregnant women and the elderly. Our sickest patients also had HIV so needed treatment for both diseases.”

By the time the cholera outbreak in Beira was officially declared on 27 March three purpose-built cholera treatment centres with a combined capacity of about 350 beds, on top of the two cholera treatment units in use at the time, were already under construction by MSF and the Ministry of Health. Smaller units were then set up in the remote town of Buzi, as well as in Dondo, Mafambisse, Matua and Tica, on the road between Beira and the inland city of Chimoio. These centres were designed not only to care for existing patients, but also to prepare for a possible exponential increase in new patients contracting cholera.

“Cholera is highly infectious and can spread incredibly fast in a crowded urban area like Beira,” said Anja Wolz, MSF emergency coordinator in Beira. “Alongside the Ministry of Health, we planned to have at least 350 beds available quickly and to be able to stretch to 1,000 if needed. We had to prepare for the worst while knowing that if we did things properly, and in partnership with the community, the worst might not come.”

The combined MSF and Ministry of Health teams have so far treated over 3,400 cholera patients in the flood affected region.

Clean water, the key to health

Local authorities in Beira were quick to focus their energy on restoring the supply of clean water. While this decision saved countless lives around the city, the clean water was not reaching all of Beira’s residents. So, to compliment the water supplied by the authorities, MSF installed a water treatment facility in Chingussura, a suburb to the north of Beira. Our facility provides up to 7,500 litres of clean water per hour for the local health care centre and the local community.

MSF water and sanitation teams are also working across the flood-affected areas to clean flood water from shallow wells, disinfect infected water sources and ensure that the most at risk areas have the chlorine they need to keep their drinking water safe.

Surviving the cyclone one month on

Now, one month after the cyclone, life has in many ways returned to normal in Beira. The streets are alive with small kiosks selling cold drinks, clothes and groceries. In some neighbourhoods, a few loose roof tiles and trees stripped of their leaves are the only reminders of the destruction that Cyclone Idai brought to the city. Yet, in others, particularly the informal settlements found throughout the city, homes remain completely flattened and unliveable, while their residents struggle to find food or shelter, and cannot access healthcare and other services.

For the last week the four cholera centres run by MSF and the Ministry of Health in Beira combined have treated around 100 new patients per day. Many of the patients are also living with HIV which means they have a compromised immune system and slows down their recovery. Given this drop in numbers, MSF is already scaling down the number of available beds from 350 to around 150 and will run just one cholera treatment centre and one cholera treatment unit for now on.

“We are not ready to say that we have beaten this outbreak because we still have new patients arriving,” said Anja Wolz, MSF’s emergency coordinator in Beira. “From what we see, the number of suspected cholera cases in heading in the right direction. Thanks to the vaccination campaign and the huge community response we believe we can soon bring this outbreak under control.”

However, there is no time for complacency as new cases of cholera are still emerging. Outside of Beira, MSF cares for patients in 20-bed units set up to treat cholera in both Dondo and Tica and in a 12 bed facility in Buzi. Moreover, MSF has prepared two treatment units in Matua and Mafambisse in case of an outbreak.

MSF also provided logistical, technical and planning support to the Ministry of Health for a cholera vaccination campaign in Beira, Dondo, Nhamatanda district and Buzi. MSF teams were responsible for helping to ensure that the vaccines are stored and transported correctly, arrive at the vaccination sites on time and that the teams had everything they needed. So far, almost 750,000 people have received the vaccine. 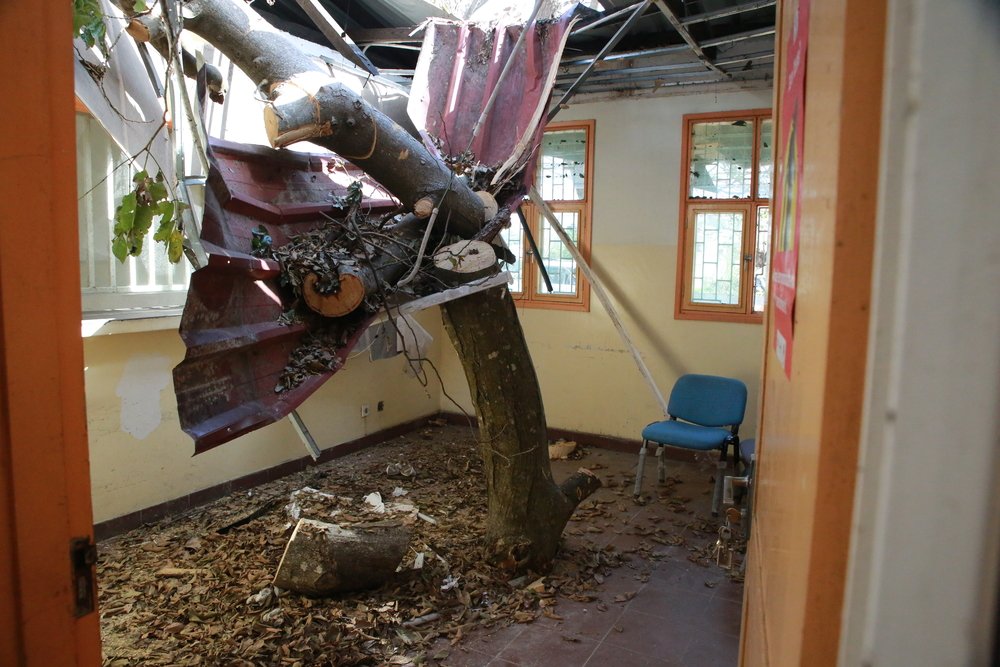 Mohammad Ghannam/MSF
Another side of the damages done by the cyclone in Beira city.

In any outbreak, working with the community to explain the disease and help families protect themselves from it is absolutely essential. In Beira, MSF health promotion teams are running street theatre groups and going door-to-door to tell people about how they can protect themselves against cholera and how they can access care if they fall ill.

“After a disaster of this magnitude is not only good strategy, it is also good manners,” says Gabriele Santi.”We wanted to show the community that we were here and looking for ways to help them after the storm.”

At the same time, our medical outreach team has set up oral rehydration points across Beira to provide residents with oral rehydration solution to stave off serious dehydration, and a nurse to assist those with suspected cases of cholera or other serious ailments close to home. Those who need to be hospitalised are transferred to one of the cholera treatment centres by MSF’s network of referral ambulances, which are coordinated by a designated call centre. Mobile clinics are also running in the informal settlements far from health centres.

These community teams are also taking the opportunity to put in place a surveillance system that can quickly spot cases of malaria and malnutrition. These could both emerge as serious issues in the coming weeks and months given the large amount of stagnant water and the huge destruction of crops Cyclone Idai left behind. Already in Nhamatanda for example, an increase in the number of patients suffering from malaria has been reported. As such MSF is already conducting assessments into food security and beginning the distribution of mosquito nets and hygiene kits in hard to reach villages and towns across the flood affected region. 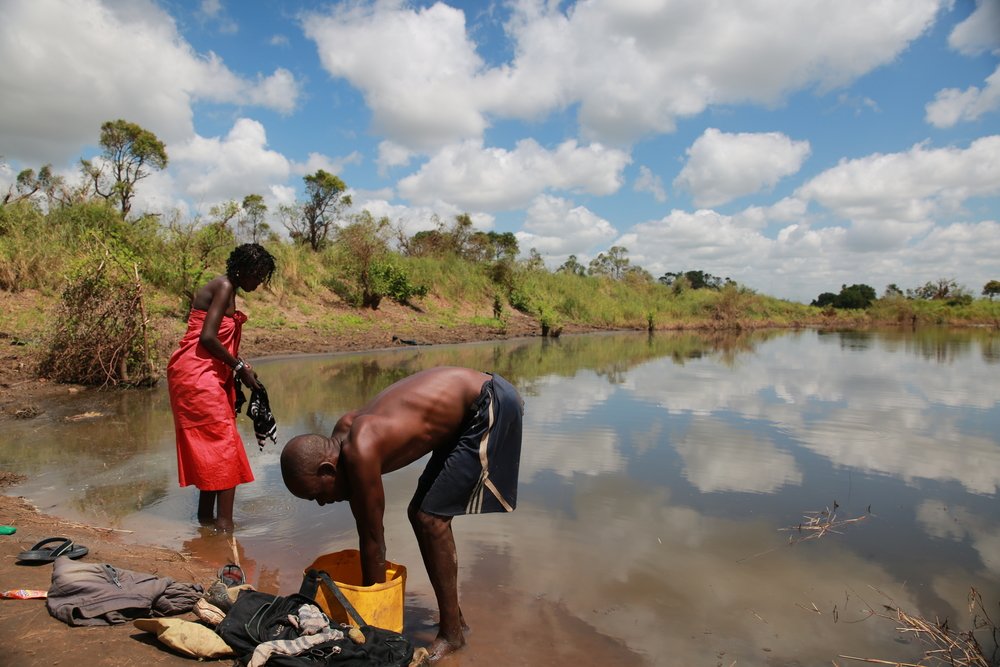 Mohammad Ghannam/MSF
Tica inhabitants have no much option to not use the contaminated water of flood.

Beyond the destruction of Beira

The coastal villages and towns in the surrounding provinces of Manica and Sofala (which includes Beira) were hit hard by the flooding and winds that battered the region for weeks before they developed into Cyclone Idai.

In Buzi, just south of Beira, more than seven metres of flood water engulfed the town. Many residents lost everything. To help with their recovery, MSF established a cholera treatment unit and is helping to rehabilitate the health center. We are focusing on the maternity service, which will allow Buzi’s mothers to give birth safely, and the outpatient department, so that patients can again access routine healthcare, including HIV treatment.

MSF has distributed key hygiene items to around 5,000 Buzi families to help prevent the spread of water-borne diseases like cholera and has also provided education and counselling to community members to help them understand how the trauma of the cyclone and flooding might be affecting them psychologically.

“The importance of healthcare is undeniable, but dignity is also key,” said Joaquim Guinart, MSF’s Project Coordinator in Buzi. “In the days after we distributed soap and chlorine solution, every house had clean washing on the line. One woman thanked me, saying she had not been able to wash clothes in the three weeks since the cyclone.”

To the west of Beira, in Dondo, where MSF is also running a cholera treatment centre, entire families are turning up sick. This is a common occurrence, as cholera is spread through contaminated food and water, and shows that more work needs to be done in the community to educate families about the importance of hygiene.

“During a cholera outbreak, a family that eats together falls sick together,” says Esperanza Santos, MSF Emergency Coordinator in Dondo. “Thankfully the cases in Dondo are concentrated in specific areas and our water and sanitation teams are already out looking at how they can make the water sources safe.”

MSF currently has over 185 international staff and 800 national Mozambican staff working to respond to the emergency caused by Cyclone Idai. Beyond these projects, MSF is working to combat the ongoing outbreak of HIV in Mozambique and has projects caring for the populations most affected by this outbreak including sex workers, men who have sex with men, drug users as well as patients with advanced HIV or TB and hepatitis co-infections in both Beira and Maputo.