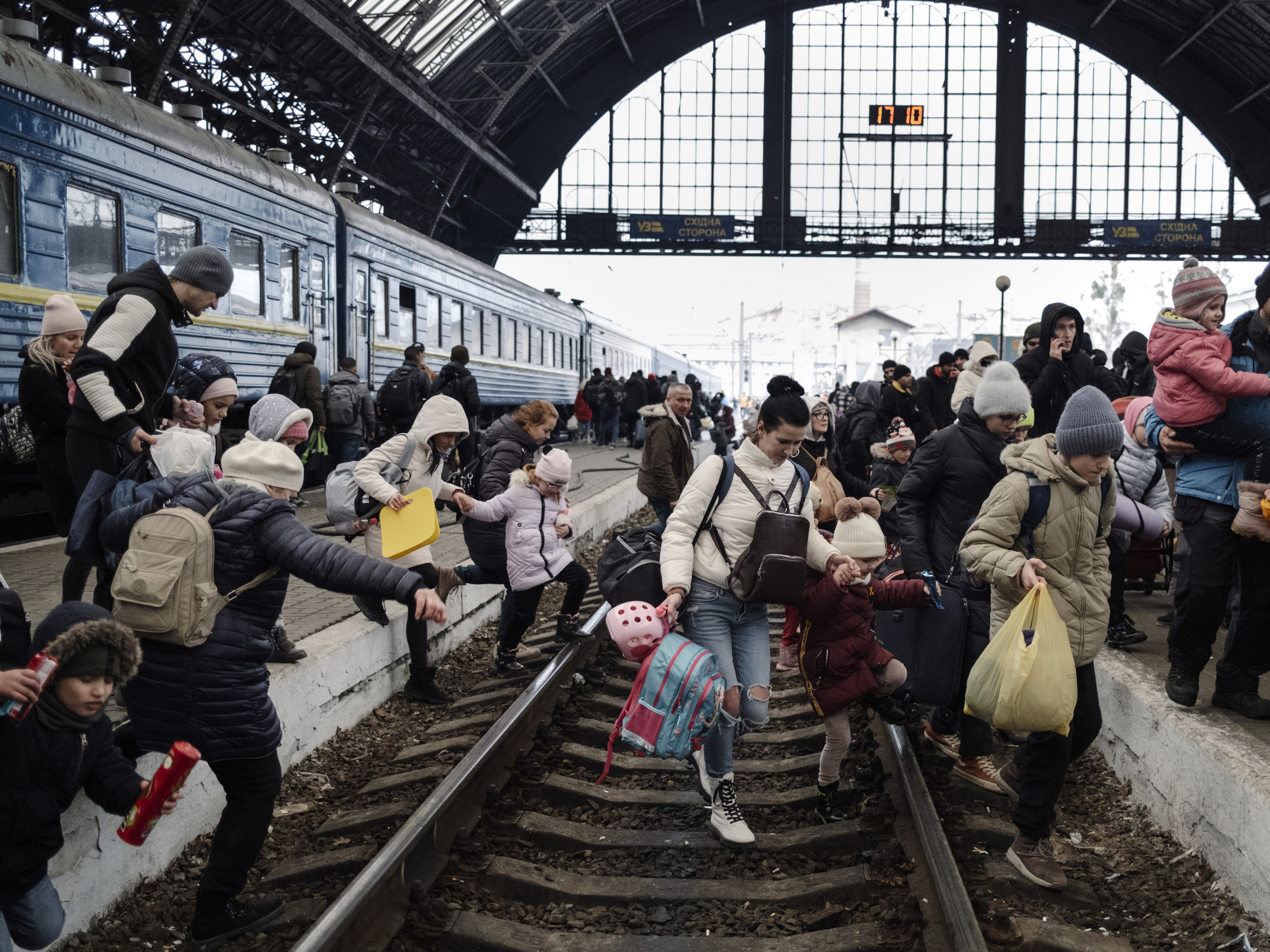 Thousands of people have been killed or injured in Ukraine, while millions more have been forced to flee their homes and seek refuge in neighbouring countries. Médecins Sans Frontières / Doctors Without Borders (MSF) is working to deliver emergency aid to people still in Ukraine, and has also deployed teams in Belarus, Poland, Moldova, Hungary, Romania, Russia, and Slovakia.

Since the outbreak of fighting across the country, Médecins Sans Frontières / Doctors Without Borders (MSF) teams have been working around the clock, mounting a response to meet urgent needs.

The situation is extremely volatile and we have witnessed the devastating impact of the conflict on civilians – some cities are surrounded by military forces, under heavy bombardment and running out of food and water.

Many hospitals are facing dramatic shortages of medical supplies – from surgical tools to drugs for chronic diseases – while the mental health consequences have been enormous, even in areas that have been spared the brunt of the violence. And, every day, more people face a terrible choice: stay in an unsafe place or flee their homes into uncertainty.

The information about our response, below, is correct as of 30 March 2022 and is likely to change.

Our Emergency Response So Far

MSF medical teams are experts at working in conflict zones and complex humanitarian crises, while our experienced logistics staff and robust supply chains ensure that critical supplies reach where they are needed.

We are working to rapidly scale up our medical and humanitarian response where the needs are greatest and where we can have a life-saving impact. 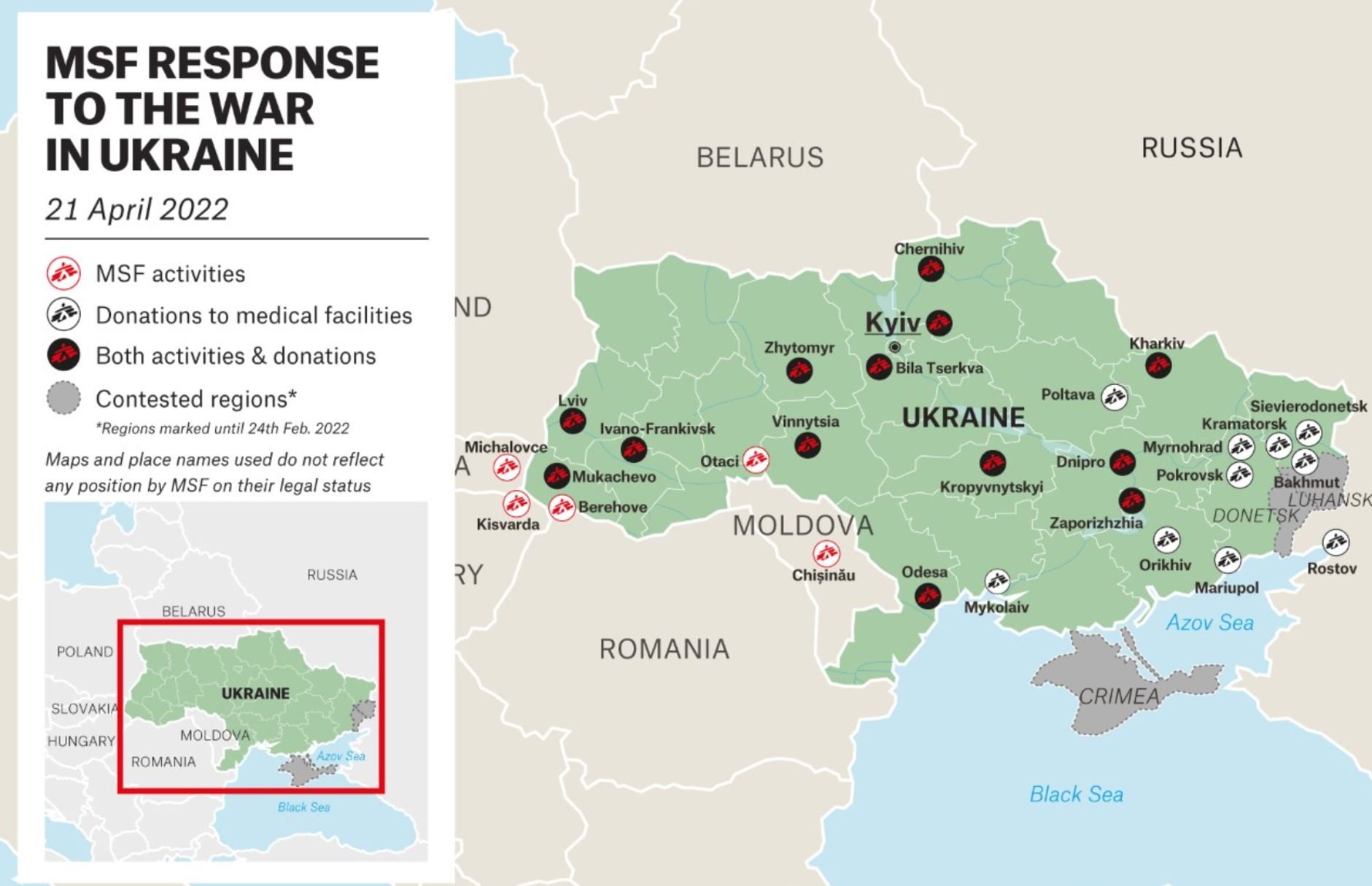 Our response to Ukraine: In-depth

Our priority in Ukraine is resupplying hospitals that are in desperate need of medicines and equipment.

This is a race against time, as it's unknown when aid will no longer be able to reach encircled towns and cities.

After the escalation of fighting on 24 February, we donated our existing supplies and rushed shipments of emergency kits to areas of heavy fighting.

Additional cargo has been arriving in Ukraine since 5 March and will continue to arrive in the coming weeks and beyond.

While the focus so far has been on surgery, trauma and intensive care needs driven by the conflict, a worrying situation is also emerging for patients with chronic diseases such as diabetes, asthma and HIV who urgently require key drugs and support.

However, with full-scale warfare in many areas, movements are difficult, dangerous or simply impossible. Communication networks are not always available and there is a significant amount of misinformation. 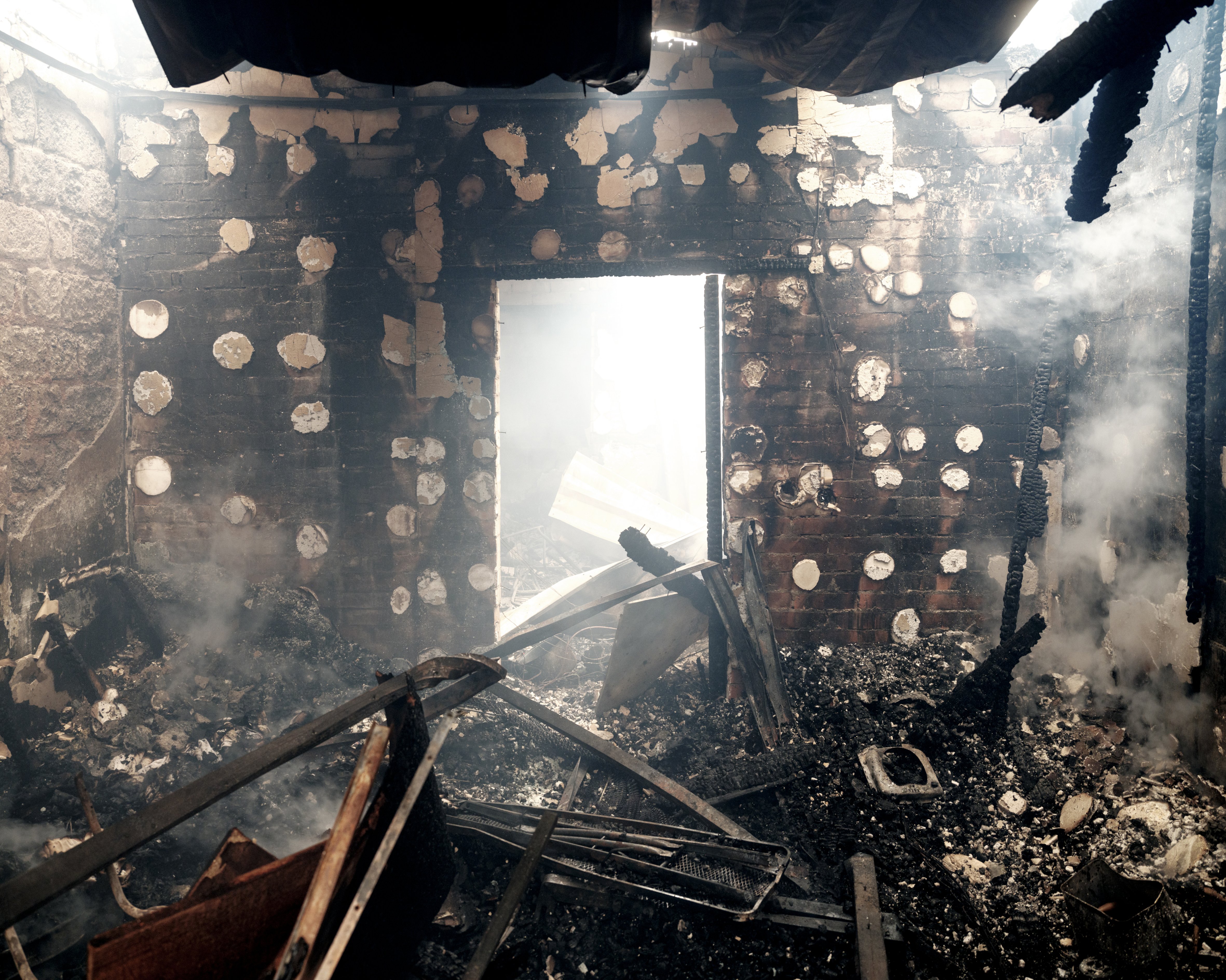 Lorenzo Meloni/Magnum Photos
24 February 2022: A burning civilian houses hit by a rocket in Mariupol, Ukraine. MSF has been working in eastern Ukraine for the last eight years, trying to improve access to health care for remote, conflict-affected populations.

Since the conflict began, MSF has transported medical supplies to treat war-wounded people arriving at hospitals in Kyiv, including specialised ‘mass casualty’ kits for dealing with incidents where large numbers of injured patients arrive at the same time.

MSF teams have also conducted mass casualty training with staff at several Kyiv hospitals, while an expert surgical team carried out hands-on war-surgery training at a paediatric hospital. We are also supporting healthcare centres in the wider Kyiv area in the treatment of patients with chronic diseases and other non-trauma needs.

In the cities of Bilal Tserkva and Fastiv, our teams are focusing on elderly and displaced people suffering from chronic diseases. This involves donations, as well as medical and mental health support, while training will be carried out with staff at healthcare facilities.

In Vinnytsia, our teams are working with local hospitals to prepare for mass casualty events, and have made donations to healthcare facilities across the region. We are also exploring how to provide support for water and sanitation needs.

Mental health support has begun in Nemyriv district, with a focus on destigmatisation and psychological support in an environment that previously relied on medication and institutions. We are also planning physiotherapy care for war-wounded patients.

In and around Zhytomyr, we have donated supplies for trauma care and held mass casualty training at seven hospitals. We have also relocated a large amount of our tuberculosis (TB) supplies from Kyiv to Zhytomyr. 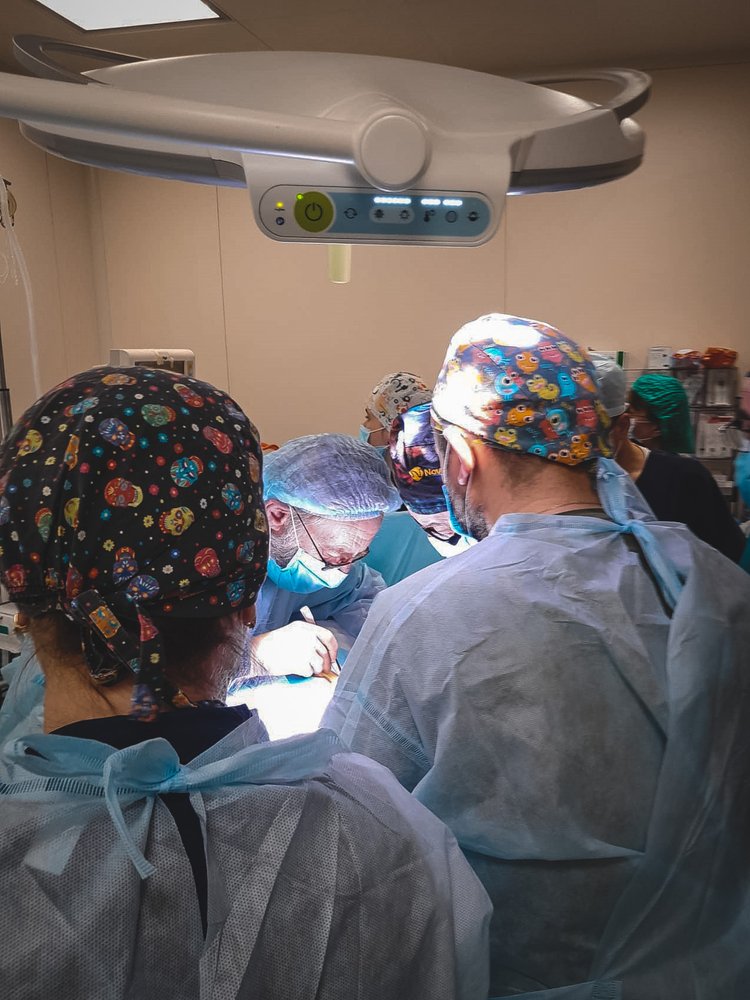 MSF has donated medical supplies to the city’s regional hospital, as well as the Chernihiv maternity hospital.

In Kharkiv, we are beginning crucial mobile clinics in subway stations across the city, while a team is planning mass casualty training at hospitals. 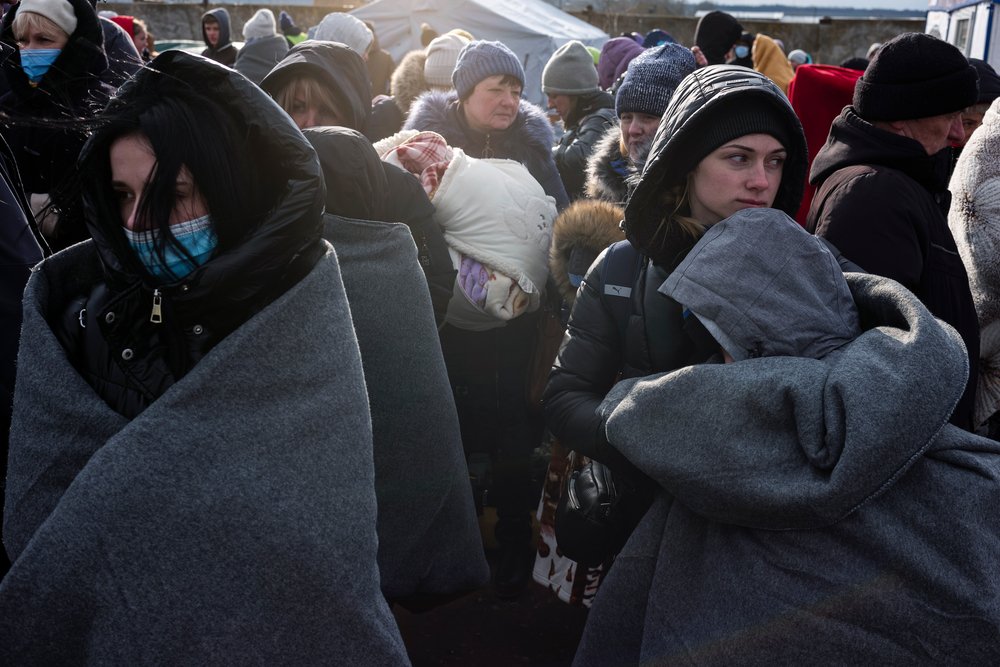 Ukrainian refugees awaiting to board buses at Palanca departure dispatch point. Once the border is crossed, the majority of Ukrainian refugees leave the country, heading for Romania, Poland and other destinations in Europe. Palanca, Moldova / March 10th 2022.

In the city of Lviv, expert teams have been training hospital staff to deal with mass casualty events and to treat war wounds.

Huge numbers of displaced people from across Ukraine are now sheltering in the city, however, the available accommodation is overflowing and outside temperatures can be as low as -10 degrees Celsius at night. We have donated a large supply of cold-weather items to civil society organisations helping the people here.

We have been supporting the main referral hospital in Mukachevo, close to the Hungarian border. This includes mass casualty training for a potential influx of war-wounded patients.

We have established bases in Uzhhorod and Ivano-Frankivsk and are building a network for transporting supplies to hospitals in frontline areas. We are also assessing nearby healthcare needs and will be carrying out chemical, biological, radiological and nuclear training with local healthcare teams.

MSF has started running mobile clinics along the border with Hungary, where significant numbers of displaced people have now gathered. We have seen early signs that mental health support will be a high priority, as will continuity of care for patients with long-term illnesses who were forced to flee their homes. 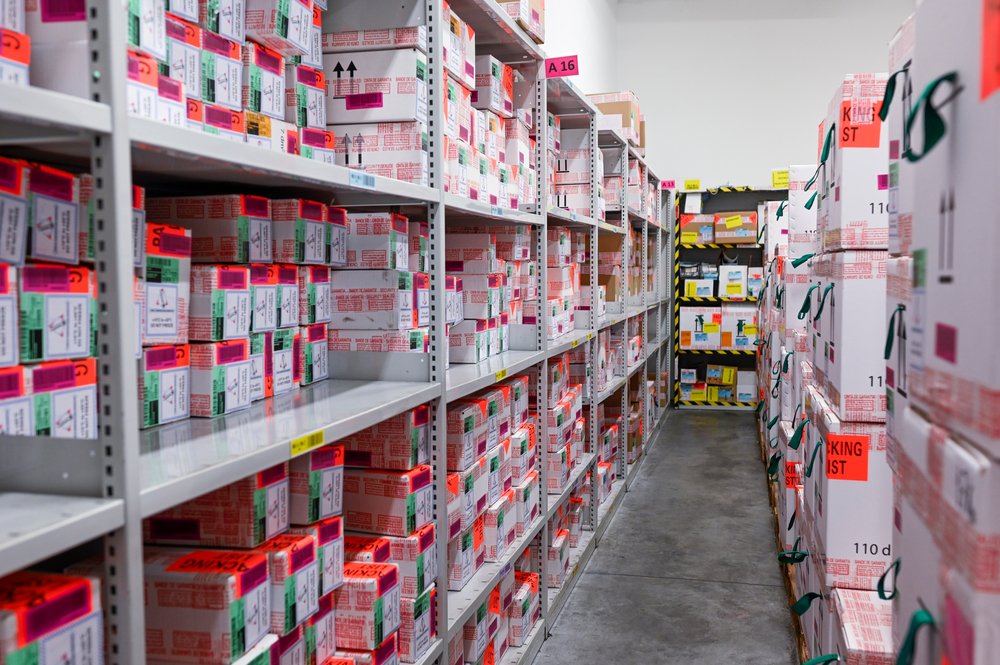 The city of Odesa has been making large-scale preparations for a future attack.

Our teams here are supporting hospital staff with mass casualty plans and training, and we are continuing to bring in medical supplies.

We are also preparing to set up ‘advanced medical posts’, which are small emergency rooms capable of providing first aid to stabilise the injured before they are transported on to hospital.

In Mykolaiv, we have donated medical supplies to hospitals preparing to accept war-wounded patients. We will also begin providing medical consultations for displaced and vulnerable people. 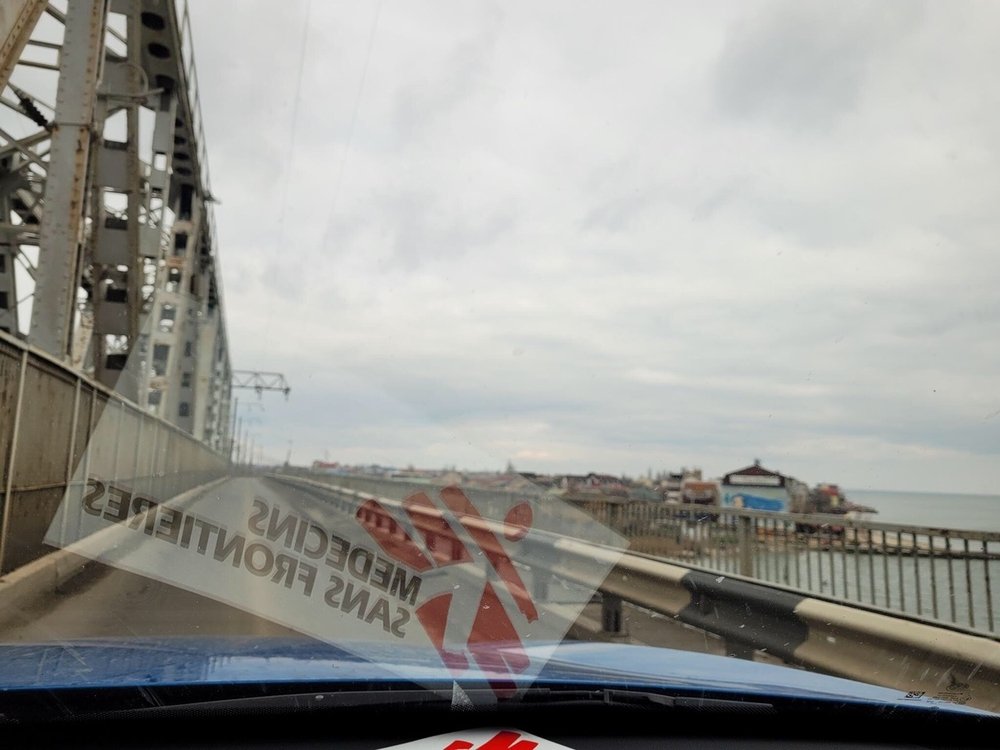 View of Odessa from a car driven by MSF staff.

Eastern Ukraine
We have maintained contact with healthcare facilities in Ukraine’s eastern Donbas region, where we ran medical projects before the escalation in fighting in February.

In Kramatorsk, we have donated supplies to seven hospitals with high needs. In Orikhiv, we have donated first aid and surgical kits, and have provided mass casualty training for healthcare staff.

The port city of Mariupol is currently surrounded by military forces and under a devastating bombardment. The situation is growing desperate.

Our staff inside the city reported that people are running out of food and medicines, with shops cleaned out and pharmacies empty. There is no heating or electricity, and most worryingly there is no access to clean water. People have been melting snow, collecting rainwater or breaking open heating systems to meet basic needs. 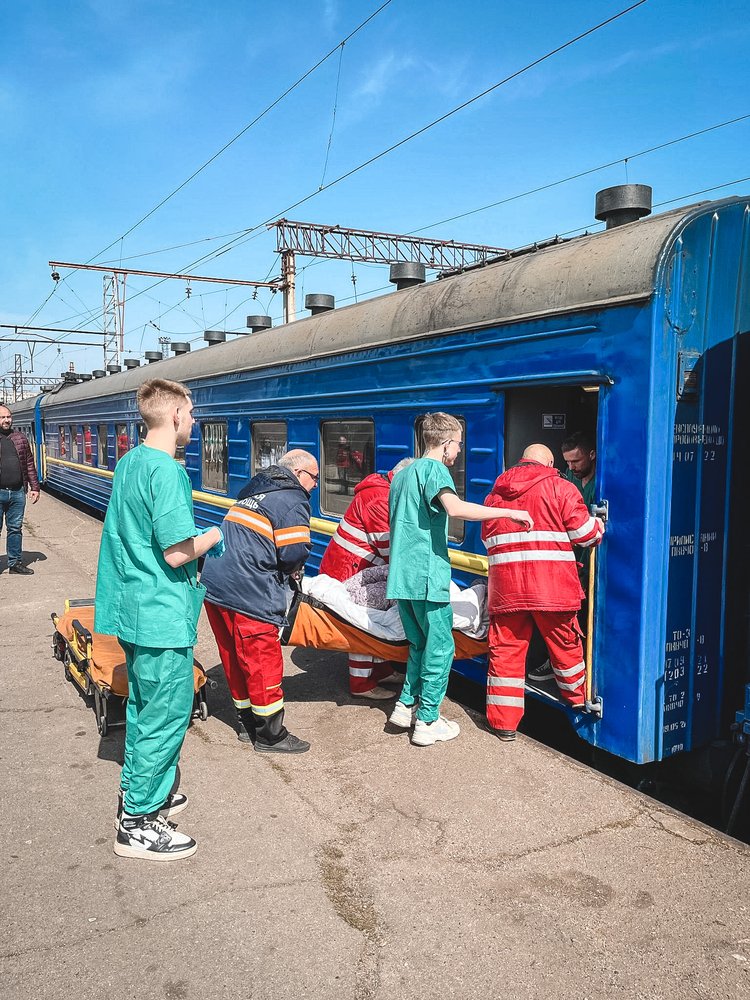 Admitting patients onto MSF’s first medical referral train in the town of Zaporizhzhia.

Our emergency response in neighbouring countries

MSF is committed to providing medical aid to people affected by the conflict no matter where or who they are, and is stepping up its response in countries bordering Ukraine, including Poland, Hungary, Moldova, Slovakia, Russia and Belarus. At the Ukraine-Poland border, our teams are seeing people cross over on foot, in cars, and on buses, many of them exhausted and some carrying children as young as 25 days old. Many of those crossing the Polish border told of long hours queuing in freezing temperatures; dehydration and hypothermia are widespread. MSF have donated essential items to a reception shelter in Poland, and are setting up emergency response activities on both sides of the border. 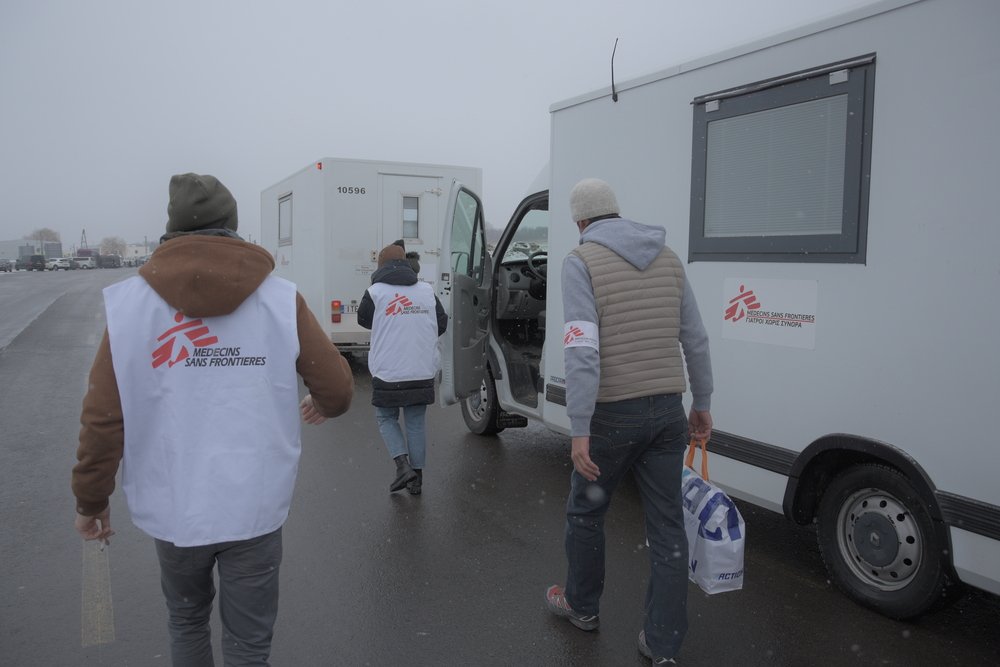 Medical mobile units sent inside Ukraine by MSF to provide medical assistance to people who are trying to cross in Poland to flee the war in their country - Polish-Ukrainian border, March 09, 2022

Before the escalation in fighting, MSF teams were already working in Ukraine’s eastern Donbas region, where conflict broke out in 2014.

Despite a ceasefire in 2015, regular violence and access to healthcare became a daily challenge for people living along the ‘contact line’. Our teams ran projects providing treatment for chronic illnesses including HIV/AIDS, TB and diabetes, as well as mental health support.

Please visit the following link, should you wish to donate to our general funds: