Thousands of asylum seekers from South Sudan have been stuck for months in undignified and unsafe conditions in Pagak reception center in Gambella region, with almost no access to humanitarian aid.

Médecins Sans Frontières is concerned about the situation of thousands of asylum seekers from South Sudan who have been stuck for months in appalling conditions in a reception center in Ethiopia’s Gambella region without meaningful access to essential services, especially food aid. MSF is worried that conditions will deteriorate even further in the upcoming rainy season.

Nyaluak Tang*, her husband and six children walked for almost one month from South Sudan’s Jonglei State to the Ethiopian border village of Pagak, where they arrived in August 2020. 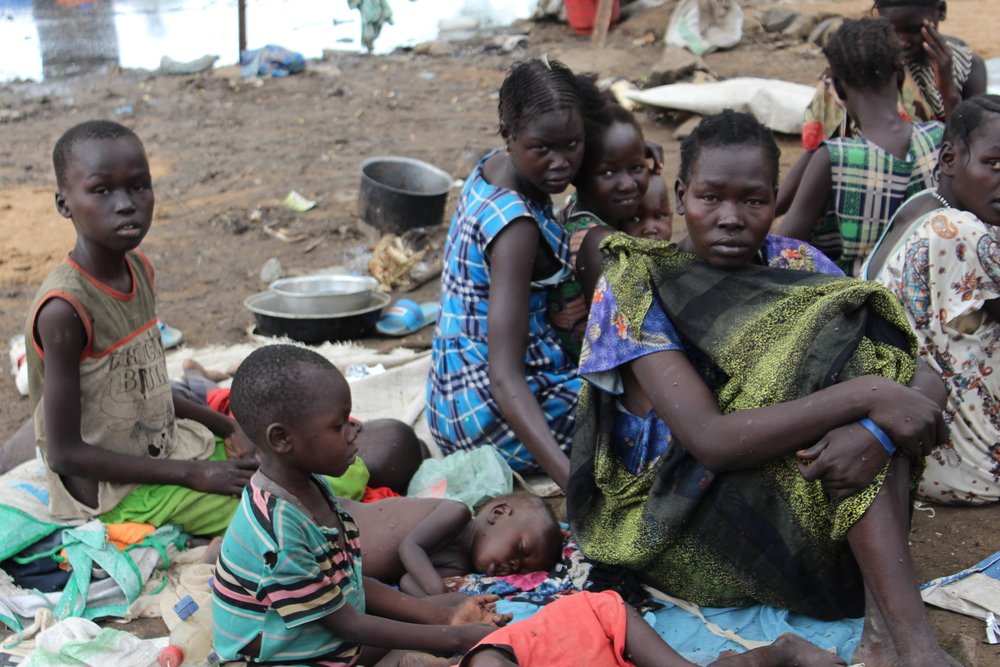 MSF/Claudia Blume
Nyabol* arrived in Pagak in February 2021, with three of her own children and three nieces and nephews. They all sleep outside, and the 28-year old feels desperate and helpless.

“We left because of the severe floods in our district, which left us without food,” says the 30-year old.

“Another reason was insecurity. One of our children was abducted by another ethnic group, and we feared for the safety of our other children.”

The family came to Ethiopia in the hope of being settled in a refugee camp, getting food aid and a secure place to live. 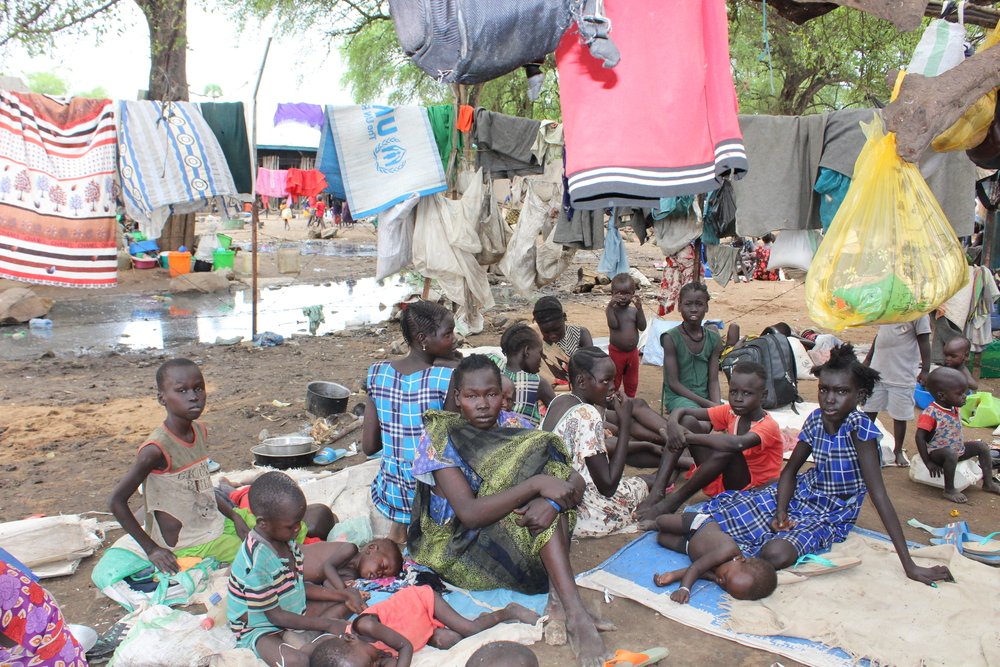 MSF/Claudia Blume
Nyabol* arrived in Pagak in February 2021. She fled South Sudan’s Jonglei State after her sister and brother-in-law were killed in inter-communal fighting.

Ethiopia is hosting a large number of asylum seekers and refugees.

The registration and relocation of new arrivals has been put on hold for months, however, due to COVID-19 and other challenges.

Nyaluak and her family have been stuck in a reception center in Pagak for eight months now, although it is meant to accommodate asylum seekers only for a short period of time. 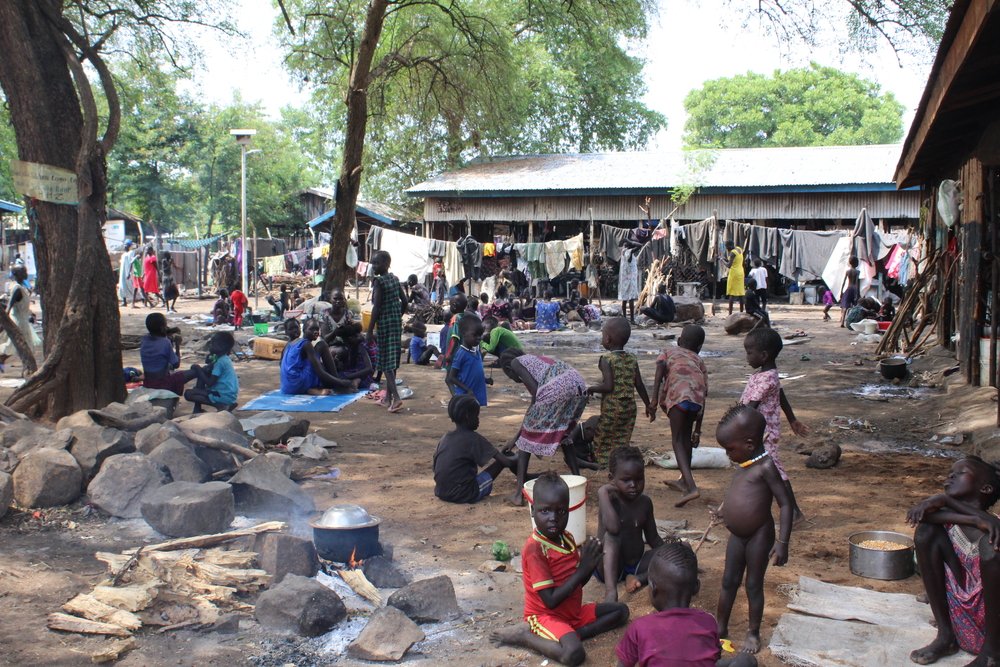 MSF/Claudia Blume
About 16,000 asylum seekers have been stuck for months in Pagak reception center, most of them women and children.

The site is also considered unsuitable, as it is prone to flooding and very close to the border.

About 16,000 asylum seekers from South Sudan, all of them from the Nuer community, the majority of them women and children, are living in a small, fenced-in and overcrowded space that is wedged in between settlements of the host community. 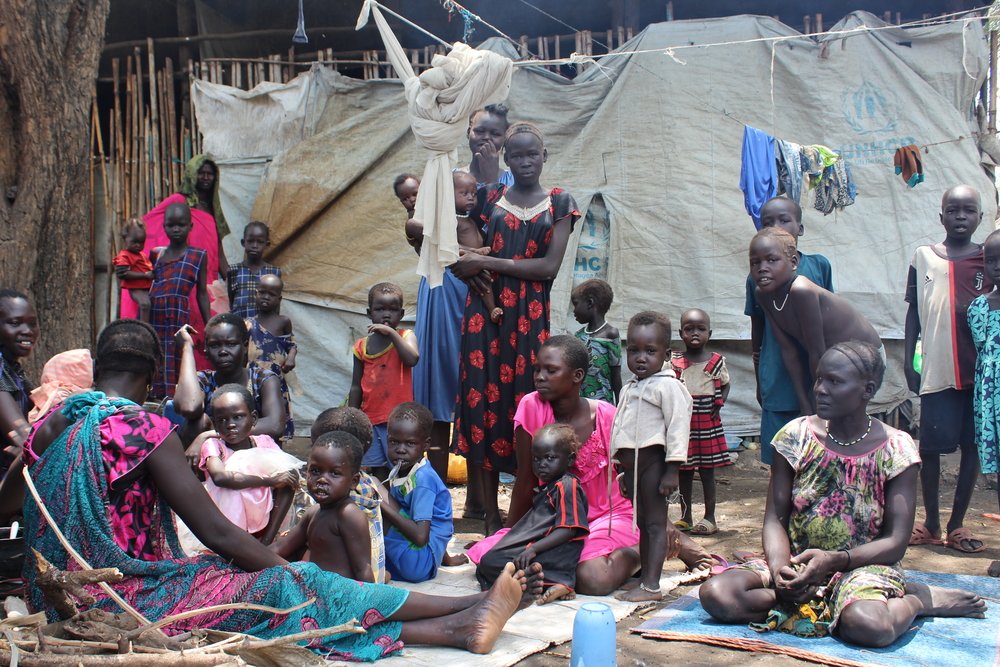 MSF/Claudia Blume
As the buildings in the reception center are overcrowded, many women and children are forced to sleep outside, without any protection from the elements.

Thousands of people live in about a dozen overcrowded, decrepit buildings that are little more than sheds, most without any mattresses or blankets.

Those are the lucky ones. 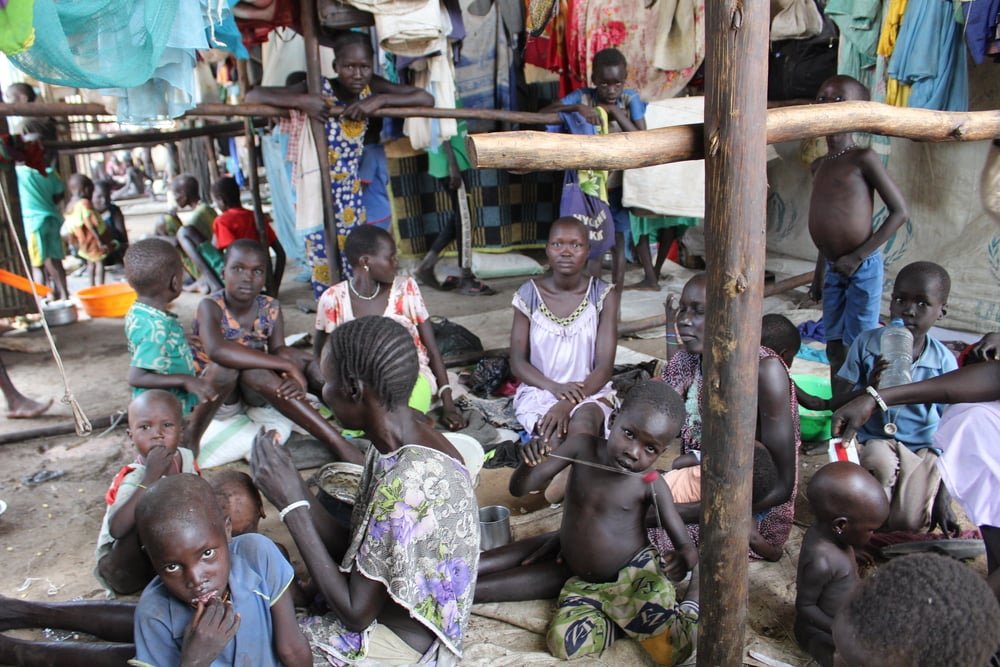 MSF/Claudia Blume
Thousands of women and children live in bad conditions in decrepit sheds in the reception center, without mattresses or blankets.

Hundreds of women and children, including pregnant mothers and babies, sleep outside, many without any plastic sheets to lie on or blankets to cover them, without any protection against the elements.

Their living conditions are dire.

The hygienic conditions are bad. With the few available latrines often filled up, many people defecate outside.

Without being registered, the asylum seekers do not have meaningful access to essential services.

People have not received any food assistance since they arrived in Pagak. Everyone is hungry. 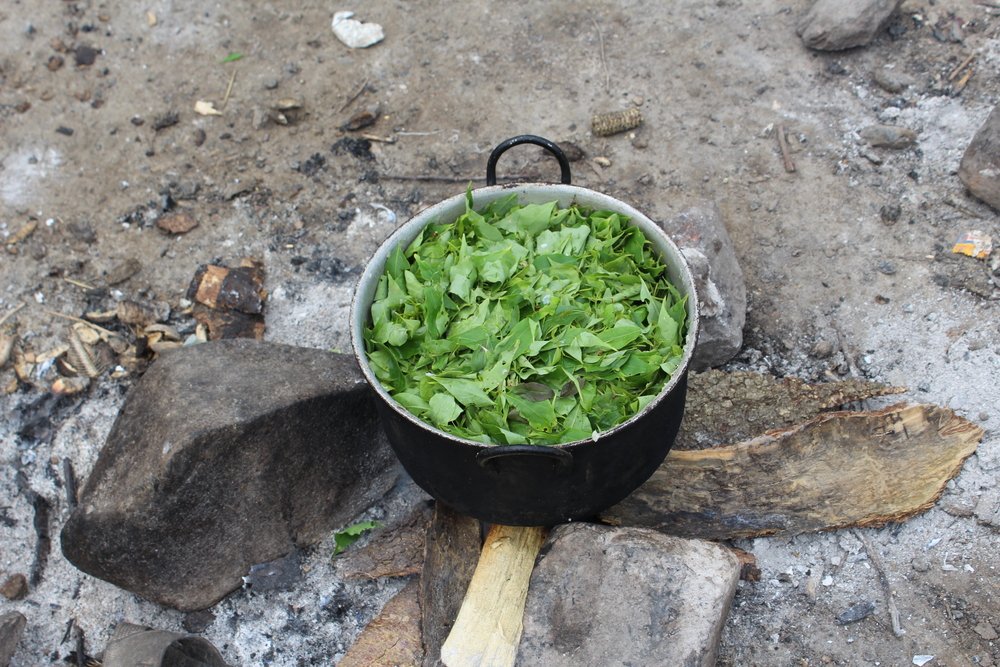 MSF/Claudia Blume
As the asylum seekers have not received any food since they arrived, most have no choice but to eat leaves that they pick from the trees.

“I am collecting forest fruits and leaves that I cook for my children,” says 45-year old Nyachuol Tut*.

Everywhere in the reception center, women are cooking bright green leaves in pots on makeshift fireplaces. For many, that’s all they have eaten for months.

Others collect firewood, selling it for a few birr in the local market to buy millet or other food.

Venturing into the forest to collect wood can be dangerous, however. 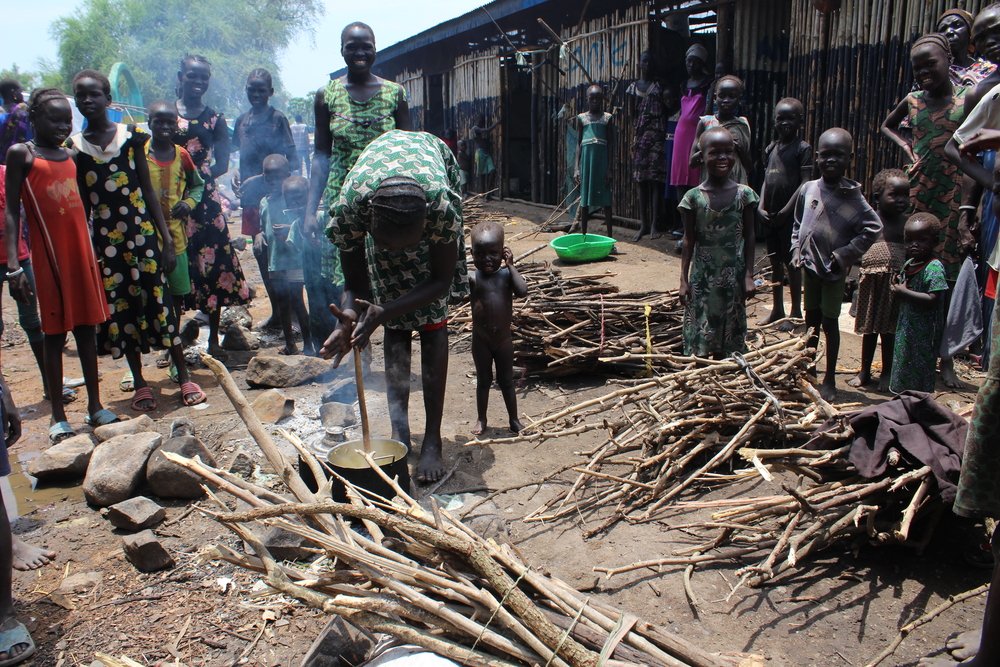 MSF/Claudia Blume
Many women collect firewood that they try to sell on the local market to buy food for their children.

“Sometimes we see soldiers from South Sudan who cross the river into Ethiopia, and they beat us,” says Nyachuol.

Asylum seekers also say that children who were playing close to the nearby river that separates Ethiopia from South Sudan have been abducted. 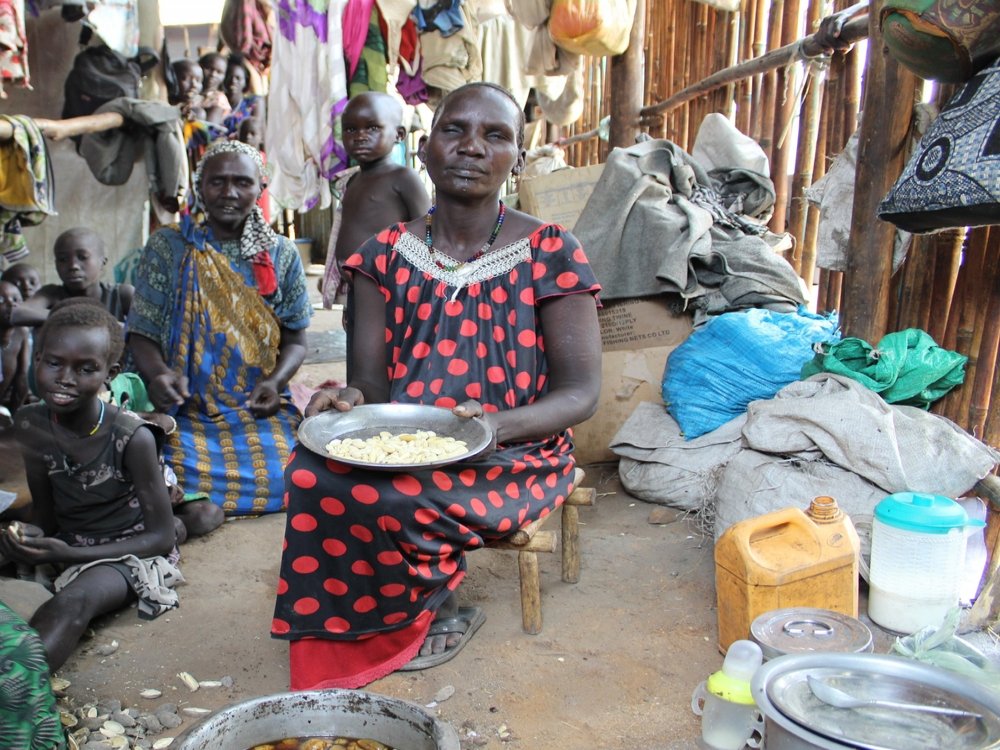 MSF/Claudia Blume
45-year old Nyachuol* prepares a meal of forest fruits for her children. Her husband was killed during fighting, and four other children remain in South Sudan. She does not know where they are.

"Nobody is helping us"

Many mothers are at their wits’ end, such as 28-year old Nyabol Lam*, who arrived in Pagak in February.

The single mum fled from Jonglei State with her own three children and three nieces and nephews after her sister and brother-in-law were killed during inter-communal fighting. 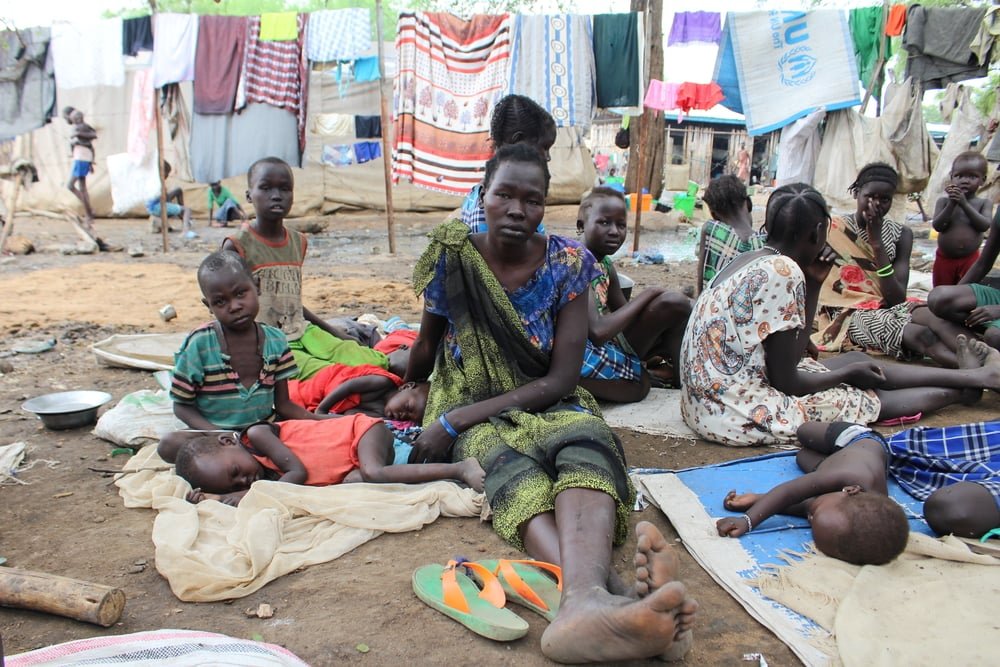 MSF/Claudia Blume
Nyabol* arrived in Pagak in February 2021, with three of her own children and three nieces and nephews. They all sleep outside, and the 28-year old feels desperate and helpless.

The youngest child is just one year old. They all sleep outside.

“I don’t even have a container to cook, no utensils. We have nothing to eat. The children are just sleeping because they have no energy. We have no clothes, no blankets. Nobody is helping us,” she says.

With the upcoming rainy season, which starts at the end of April, the situation will deteriorate further if no solution is found. 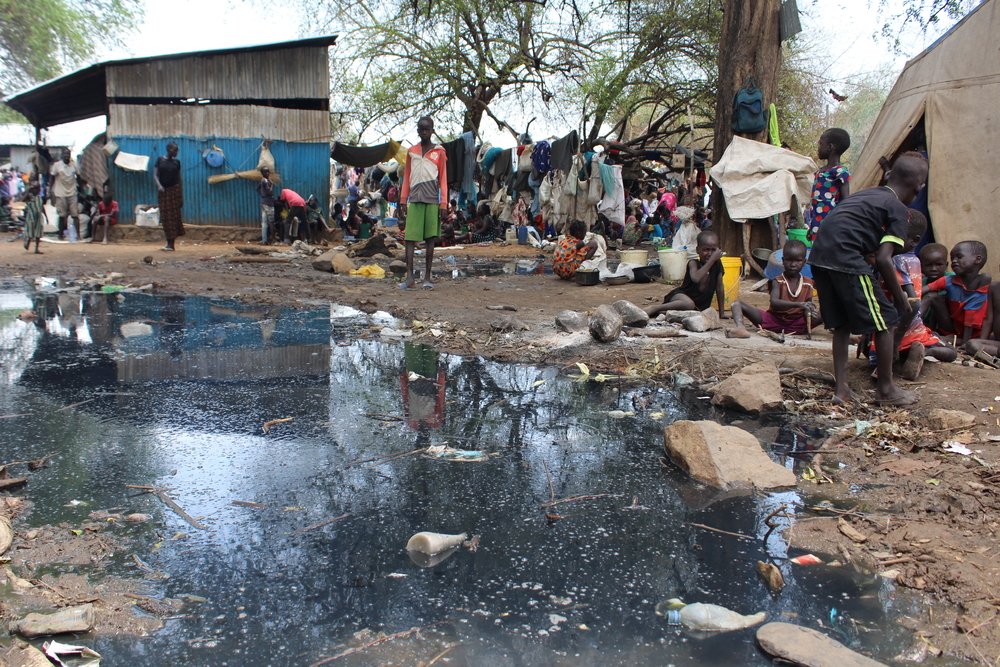 MSF/Claudia Blume
Occasional downpours have already turned parts of the site into a swamp. Stagnant water is a breeding ground for mosquitoes.

Already, occasional downpours have turned parts of the camp into a swamp.

Once the rains fully start, people will no longer be able to sleep outside.

“When it rains, we all seek shelter in the sheds,” says 67-year old Gatluak Deng*, who sleeps outside with his children and grandchildren. 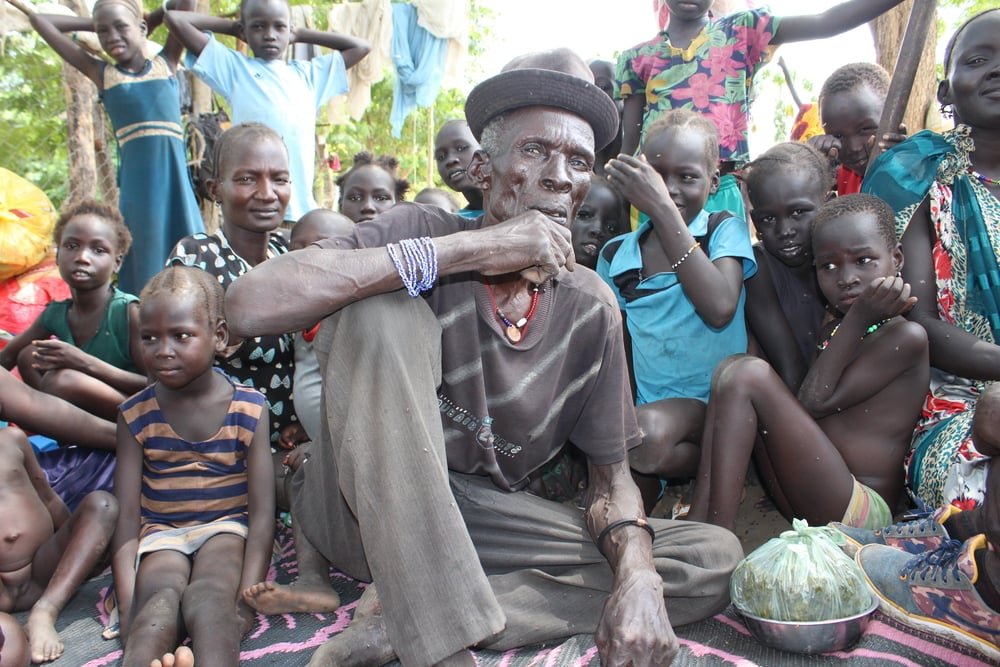 “Because it’s so crowded then, we have to sit up all night. No-one has the space to lie down.”

The rainy season will also make it difficult to collect firewood, leaves and forest fruits, and to cook outside. 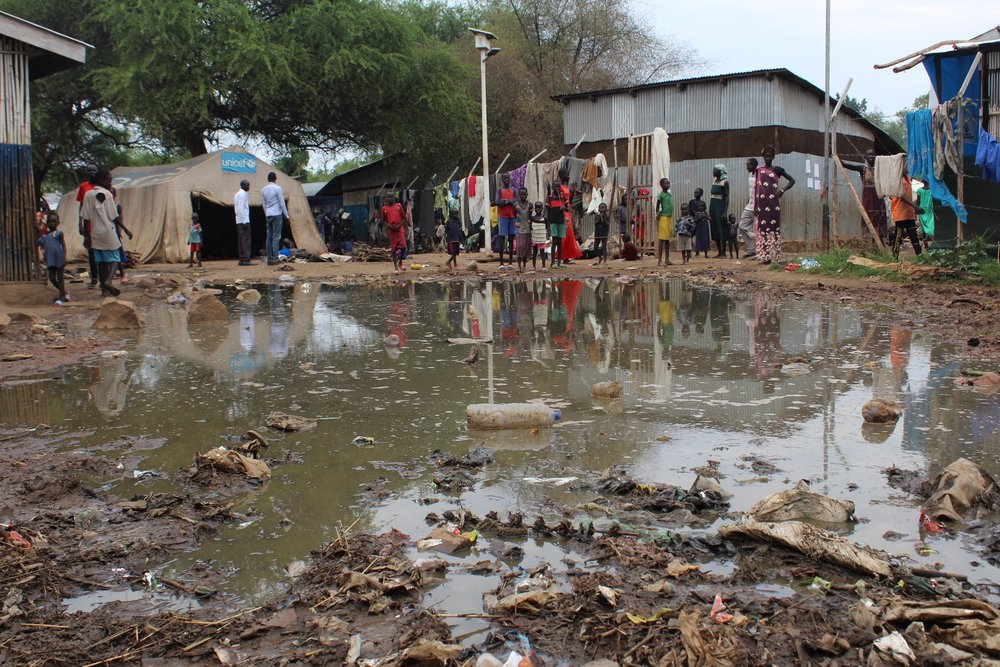 MSF/Claudia Blume
Occasional downpours have already turned parts of the site into a swamp. Stagnant water is a breeding ground for mosquitoes. The situation will significantly deteriorate once the rainy season starts at the end of April.

A breeding ground for disease

There are already several ponds of stagnant water in the site, creating an ideal breeding ground for mosquitoes.

“Malaria is already one of the top morbidities of children under five”, says MSF country director Audrey van der Schoot. 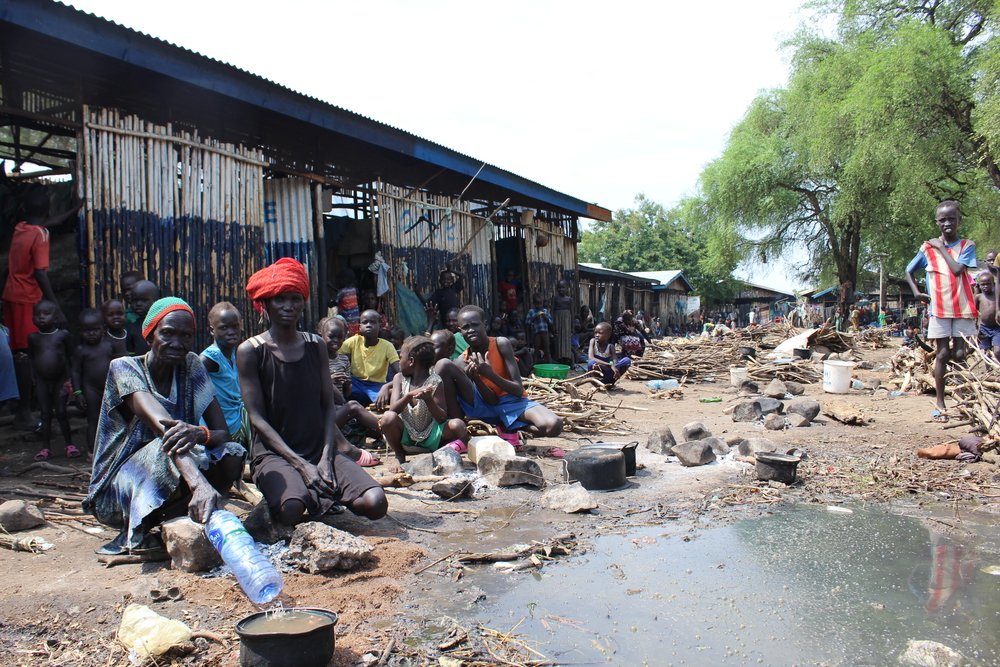 MSF/Claudia Blume
Stagnant water is a breeding ground for mosquitoes. The situation will significantly deteriorate once the rainy season starts at the end of April.

”In February and March, we treated 593 patients with malaria. We expect the numbers to go up once the rainy season starts, as well as cases of waterborne diseases such as acute watery diarrhea.”

In March, there were four confirmed cases of COVID-19 in Pagak reception center.

With people living together so closely, without masks and proper infection prevention and control measures, COVID-19 and other communicable diseases can spread fast. 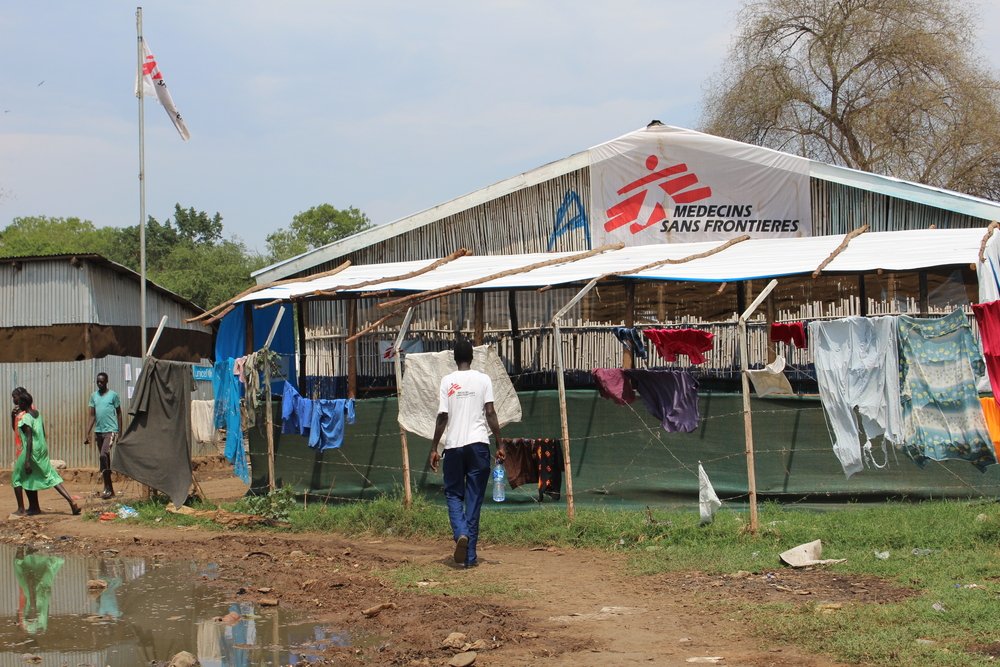 The situation will likely become worse once the rains start, when everyone is huddled together under the few available roofs.

“The situation needs to be addressed urgently. Asylum seekers need to be registered in a timely manner, and the process for the establishment of a proper reception center in a more suitable location in the region, where they will receive food, protection and other services, needs to be sped up,” says van der Schoot.

“In the meantime, we urge other organizations to scale up the provision of essential services in Pagak.” 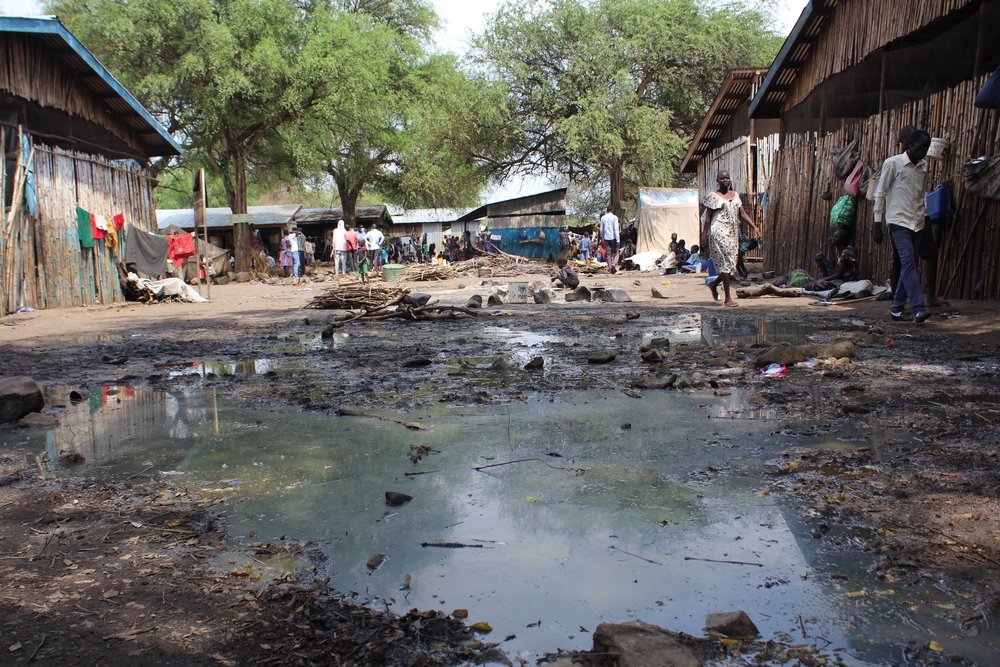 MSF/Claudia Blume
Occasional downpours have already turned parts of the site into a swamp. Stagnant water is a breeding ground for mosquitoes.

MSF started medical activities in the health post in Pagak in February 2021 and has carried out more than 6,870 medical consultations until the end of March.

Our team treats both asylum seekers and the host community. 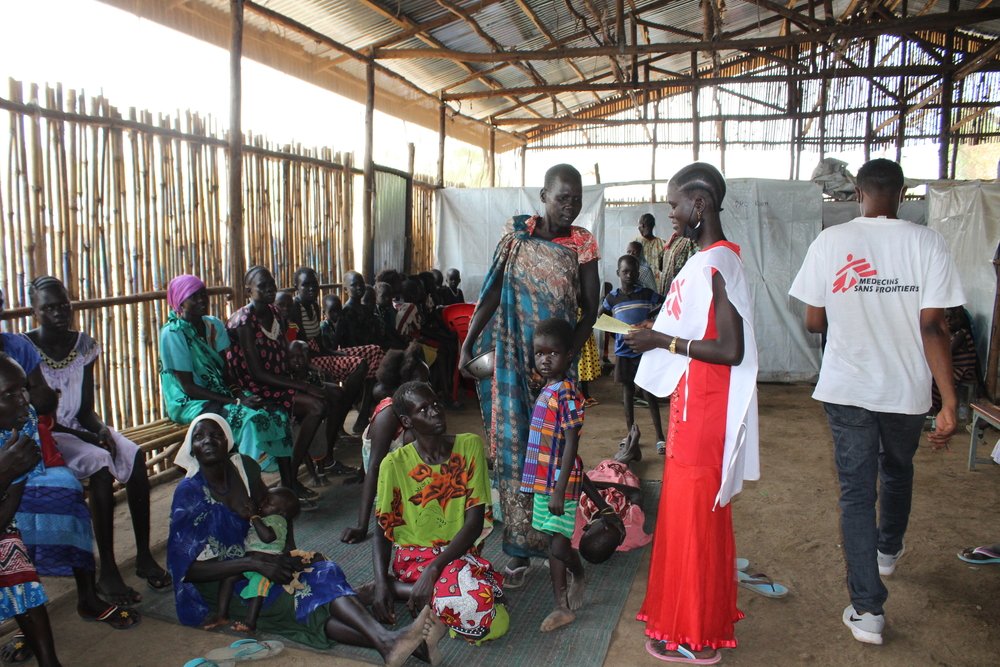