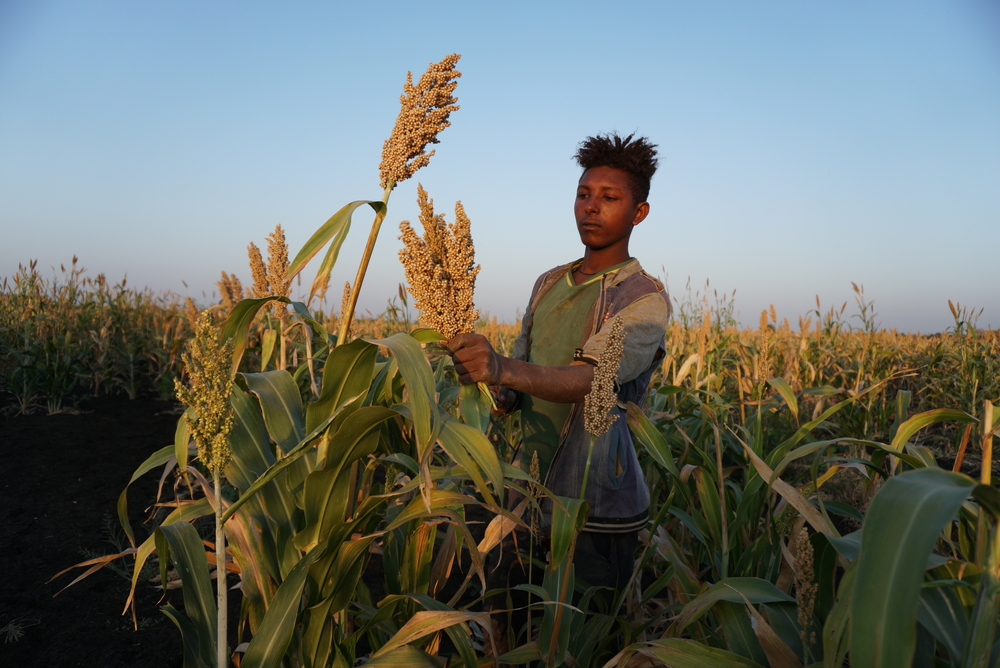 “The first ten minutes are critical”: treating snakebite in Ethiopia

A young woman with a swollen face sits on a bed in MSF’s close monitoring room, in Abdurafi, northern Ethiopia, awaiting the result of her blood test for snakebite envenoming. Workey Mekonen was bitten on her forehead by a small snake while sleeping on the ground in a farm shed.

Harvest workers in the fields

The remote region of Amhara in northern Ethiopia is known for its fertile land and its vast commercial farms cultivating sesame, sorghum, cotton and other crops. It is also a region inhabited by some 20 different venomous snakes endemic to this part of Africa. During the peak of the harvest season, farm workers come across snakes almost every day.

In search of work, almost half a million daily labourers migrate every year from the highlands of Ethiopia to the lowland farms surrounding the town of Abdurafi. They usually arrive in August for the start of the harvest season. Most leave in October, but others stay on until early January for the sorghum harvest.

"Unfortunately, in most parts of the country, effective antivenom is either unavailable or is too expensive for the communities most affected by snakebite."

It is not only men who come looking for work; women, such as Workey, come too. Since her husband died four years ago, Workey has earned a meagre living for herself and her four children by cooking for farm labourers in the fields. She leaves her children with her sister in Tigray, half a day’s journey from Abdurafi, while she works as a cook.

The previous night Workey awoke with a sudden piercing pain to her forehead. When she caught sight of something slithering away across the floor, she realised she had been bitten by a snake. She had been sleeping on the ground of an open shed where crops and other farming materials were stored. Relieved at first that it was only a small snake, the pain and swelling soon made her fear for her life.

Fellow farm workers took her to her uncle, who lives nearby. He had heard about our clinic in Abdurafi town, which treats people for snakebite free of charge, and took her there. By that time, Workey’s face was so swollen that she was unable to see. She was immediately admitted to the clinic for close monitoring. 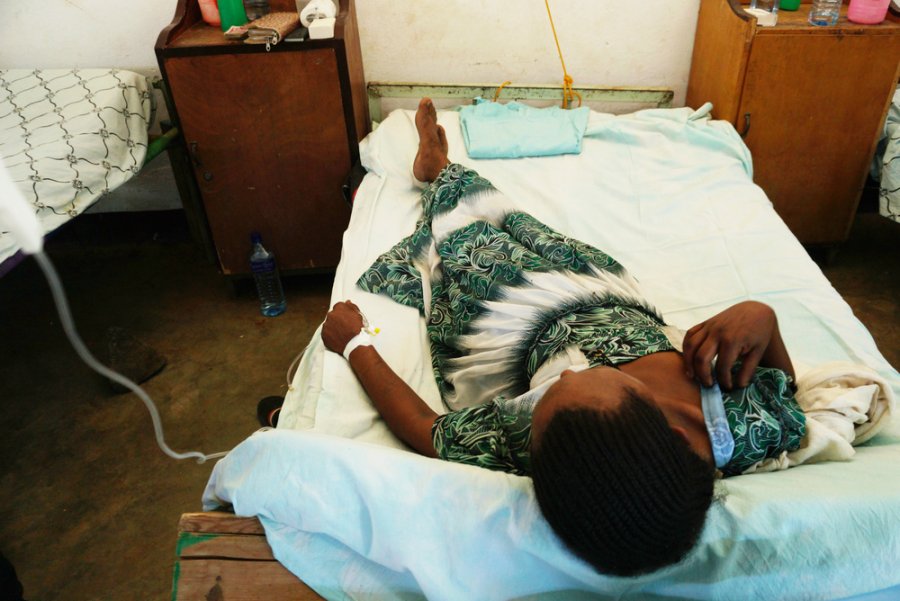 Susanne Doettling/MSF
24-year old migrant harvest worker Workey Mekonen, receives an infusion of antivenom in the MSF clinic in Abdurafi, Ethiopia. She was bitten on her forehead by a small snake.

Ten minutes later, Workey’s blood test result is ready. It shows no blood clotting, a clear indicator that the snake has injected its venom and that she needs to be treated with antivenom. MSF clinical officer Degifew Dires prepares the infusion, and spends the next 140 minutes slowly dripping it into the veins in her arm.

“The first ten minutes are critical and need closest monitoring to ensure that she has no harmful reactions to the antivenom,” says Degifew. “Over the coming hours we will regularly check her physical condition and vital signs.”

Snakebite a lethal, yet neglected, killer

Snakebite envenoming is overwhelmingly an affliction of the rural poor in agricultural and herding communities and kills more people than any other disease on the neglected tropical diseases (NTDs) list of the World Health Organization (WHO). An estimated 2.7 million people are bitten by venomous snakes worldwide every year, resulting in death for more than 100,000 people and life-long disfigurement and disability for 400,000 more.

“Workey soon felt better and, after five days in our clinic, she could be discharged fully recovered,” says MSF’s Dr Ernest Nshimiyimana. “She was lucky that she was brought to us in good time and treated with effective antivenom.”

Migrant harvest workers among most vulnerable

Not everyone bitten by a snake in Ethiopia is so fortunate, as the antivenom to treat snakebites is out of many people’s reach.

“Unfortunately, in most parts of the country, effective antivenom is either unavailable or is too expensive for the communities most affected by snakebite,” says Dr Ernest. 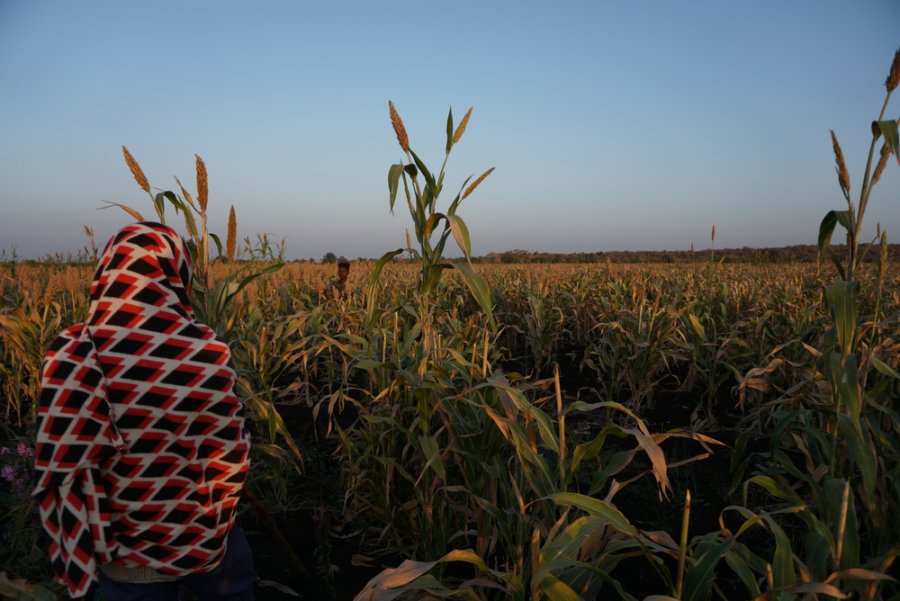 Susanne Doettling/MSF
In the early morning in a sorghum field about 30-minute-drive by car from Abdurafi town, a migrant worker harvests sorghum.

Migrant workers are particularly vulnerable to snakebite. They often work barefoot in the fields at night, using their bare hands to harvest crops. The sesame fields are particularly hazardous. Sesame does not grow very high but it does grow thickly, making it an ideal hideout for snakes. To harvest the crop, workers must crouch down, making both their hands and feet vulnerable to snakes.

“In the peak months we often have up to 20 patients with snakebite in our close monitoring room,” says Dr Ernest. “Having been bitten, many have to travel for hours, especially those working in the remote fields, to reach medical facilities. Timely treatment of snakebite is crucial.”

The number of snakebite victims arriving at Ethiopian health facilities is not recorded, making it impossible to know the national health burden of snakebites. But MSF figures give an indication of the scale of the problem. In 2017, MSF treated 609 patients in different projects in Ethiopia, 322 of them from Abdurafi. In 2018, the number has increased; by the end of 2018 MSF treated 647 patients only in Abdurafi. These include so-called dry bites (warning bites) and bites with mild, moderate and severe poisoning.

"Having been bitten, many have to travel for hours… timely treatment of snakebite is crucial"

Antivenom is just one of a range of treatments, depending on the type and severity of the envenoming.

“In October, for example, we treated 115 patients for snakebite,” says Dr Ernest. “Only 22 of these patients required antivenom administration, while 93 could be treated clinically. We can manage many bites conservatively with IV fluids, pain management, blood transfusion and leg or limb elevation. We also treat associated infections and give wound care if needed.”

As he speaks, Dr Ernest is doing the morning ward round in the close monitoring room. He stops to talk to a young man who was bitten by a snake on his foot while working on the family farm the previous night. The young man did not require antivenom administration, and the doctor is satisfied that the development of the swelling is being monitored and documented and that he will make a good recovery.

Many more lives could be saved if all snakebite victims in Ethiopia had access to such timely and effective care. For patients like Workey, the envenoming could have been life-threatening if she had not been able to access a clinic providing free and effective antivenom treatment.

With almost no funding currently coming from donors for snakebite prevention and treatment, the bottleneck remains the availability of effective and low-cost antivenoms.

WHO has started helping countries select safe antivenoms, which are effective against local snake species, but a number of manufacturers have stopped producing some antivenom products, further limiting access for the victims of snakebite.

While we provide treatment free of charge in our facilities, elsewhere treatment can cost upwards of US$100, making it unaffordable in rural areas, such as northern Ethiopia, where most people at risk live.

The need for quality, low-cost antivenom

Quality antivenoms that are effective against local snake species and safe when administered need to be made available, free of charge or at a price that everyone can afford. At the same time, more healthcare workers in remote farming areas need to be trained in how to treat snakebite.

We hope that donors and governments will support the implementation of WHO’s snakebite roadmap, an ambitious plan which includes a range of activities to help overcome the barriers people face in accessing treatment.

MSF is cautiously optimistic that the WHO roadmap could be a turning point in tackling snakebite. In the coming months, we will be working with governments, treatment providers, donors and communities affected by snakebite to make world leaders accountable for ensuring that the roadmap is implemented and leads to real change for snakebite victims everywhere.

OUR WORK IN ETHIOPIA >