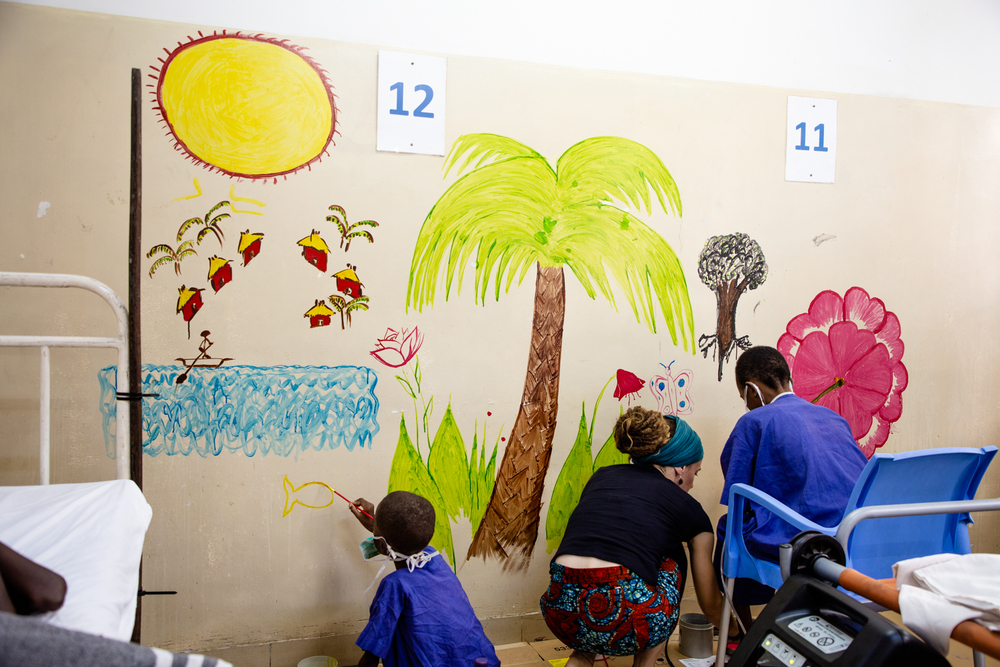 There are an estimated 51,000 children potentially living with HIV in DRC, but only 34 % of them are receiving treatment. Since 2002, MSF’s HIV project in Kinshasa provides testing, treatment and psychosocial support for people living with HIV and AIDS, as well as advocate for an improved HIV response in the country. By February 2019, 370 children living with HIV were also being followed on an outpatient basis by MSF’s HIV project. MSF also offers group sessions and psychosocial support for the children and their caregivers, particularly for those children who were hospitalised, to support their adherence to treatment. ​

A mural tells a story

In late 2018, MSF staff, armed with paint and paintbrushes, arranged a day of fun and smiles for young patients in the four-bed paediatric ward of MSF’s 41-bed hospitalisation unit in Kabinda Central Hospital in Kinshasa, which specialises in the treatment of advanced HIV or AIDS. Together, staff and young patients painted the largely bare walls of the unit with colourful inspiration and messages in order to bring some joy to the difficult, often lonely journey of these children living with HIV.

While the video of mural painting produced by the MSF team shows some playful fun, its message is far more serious: children are the most severely neglected in the HIV response, especially throughout West and Central Africa.

Around 7% of severely ill patients arriving in the hospitalisation unit are children and adolescents, ranging from a few months until 14 years old. In 2018, 144 children were hospitalised in the paediatric ward of the AIDS unit, with 8% arriving too late to be saved. Some children can spend several weeks in hospital, some without a permanent caretaker to support them through the intense sickness.

Each hospitalised child represents a long, painful and invisible journey through a health system that was unable to prevent their infection, or diagnose, treat and support them if HIV positive towards healthy adulthood.

Around 51,000 (UNAIDS 2017) children under 14 years are believed to be living with HIV in DRC. Most paediatric infections happen during pregnancy and breastfeeding, if the HIV-positive mother is not taking antiretrovirals. This can be either because the mother has never been tested for HIV, or because she has developed resistance to or interrupted her treatment, or even because she was infected during the pregnancy itself. In general, people living with HIV face huge challenges staying on treatment, including stock outs of drugs and stigma.

In health structures supported by MSF in Kinshasa, teams still diagnose children with HIV, which means gaps remain in preventing mothers from passing HIV to their new-born children. Insufficient awareness among health staff and new mothers about paediatric HIV also impacts on the regular testing of children. Many children are only diagnosed with HIV years after their infection, when they fall severely ill and are admitted for hospital care.

Worldwide 50% of infants born with HIV die before the age of two. The other 50% progress slowly towards AIDS, with severe delays in their neurological and physical development, as well as multiple illnesses. 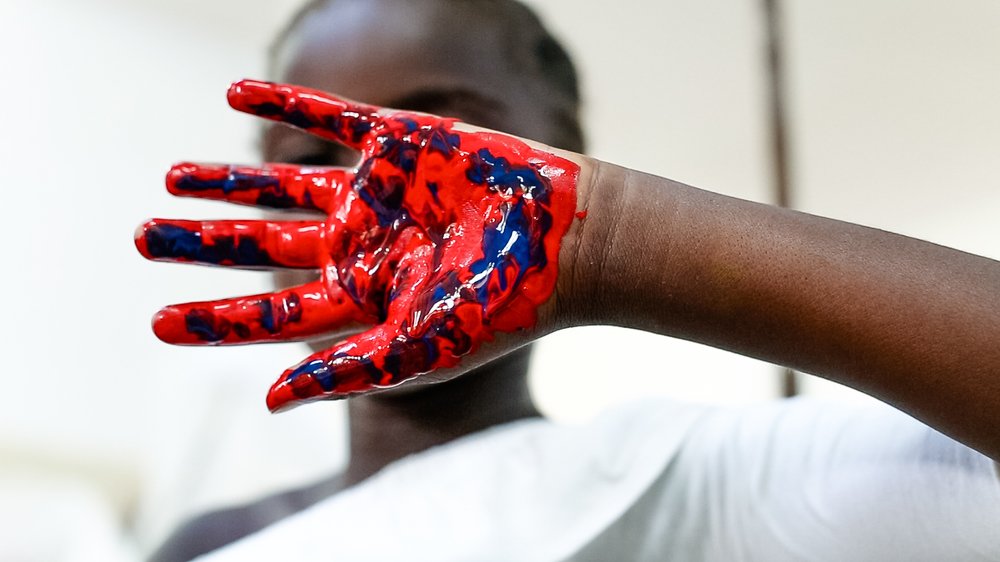 Ghislain Massotte/MSF
MSF staff, armed with paint and paintbrushes, organised a day of fun for young patients in the paediatric ward of MSF’s hospital unit Kabinda Central Hospital in Kinshasa.

These huge challenges mean that only 34% (UNAIDS 2017) of children suspected of living with HIV are on treatment in DRC. Presently, there are few appropriate HIV treatments that can be tolerated across of the spectrum of early years. Existing formulations for children are mostly in syrup form, have a bad taste, are difficult to dose and may need to be refrigerated. Newer, better antiretrovirals are only registered for adults and come in dosages for 20 kilograms and upwards.

The ‘lucky’ ones that are diagnosed and put on HIV treatment are often not told they have HIV, or why they take daily pills. The stigma around HIV is so high in DRC that many HIV patients never tell a single person of their status. Parents of HIV positive children often fear their child will tell others, thus revealing their own HIV status. Worse, if the parents have died, step-parents or caretakers frequently abandon or neglect the child, fearing shame from the community. Congolese law only permits health professionals to tell the child of their HIV status from age 18 onwards or with the parent’s consent, except when his or her best interests requires otherwise. Many only make the traumatic discovery by accident, which often affects their desire to stay on treatment, which can ultimately lead to them arriving severely ill in MSF’s paediatric ward.

At the Kabinda Hospital Center (CHK) in Kinshasa, MSF provides inpatient and outpatient services for children, adolescents and adults living with HIV. By end February 2019, 370 children and adolescents were being supported on an outpatient basis. In 2018, more than 140 children with advanced HIV were hospitalised in the four-bed paediatric ward MSF’s AIDS hospital.

In addition to medical care, MSF also offers psycho-social support for young people and their families, and organizes group sessions to raise awareness about the importance of treatment to maximize treatment adherence among young patients.

OUR WORK IN THE DEMOCRATIC REPUBLIC OF THE CONGO >