“If the rain abandons us again, we don’t know what we will do”

30-year-old Khadidja Iba sits on a colorful mat in the waiting area of a therapeutic feeding center that Médecins Sans Frontières (MSF) has set up at a health center in Massakory, a small town in Chad’s Sahel belt. The mother of six has walked for two hours to bring her youngest child, 9-month-old Sara, for a follow-up visit. The child has been enrolled in MSF’s nutrition program for a month. After an assessment with MSF’s health staff, Khadidja receives a week’s worth of bright red packages of Plumpy’Nut, a high-energy peanut paste used to treat malnutrition, that she will feed the baby until her next assessment the following week. 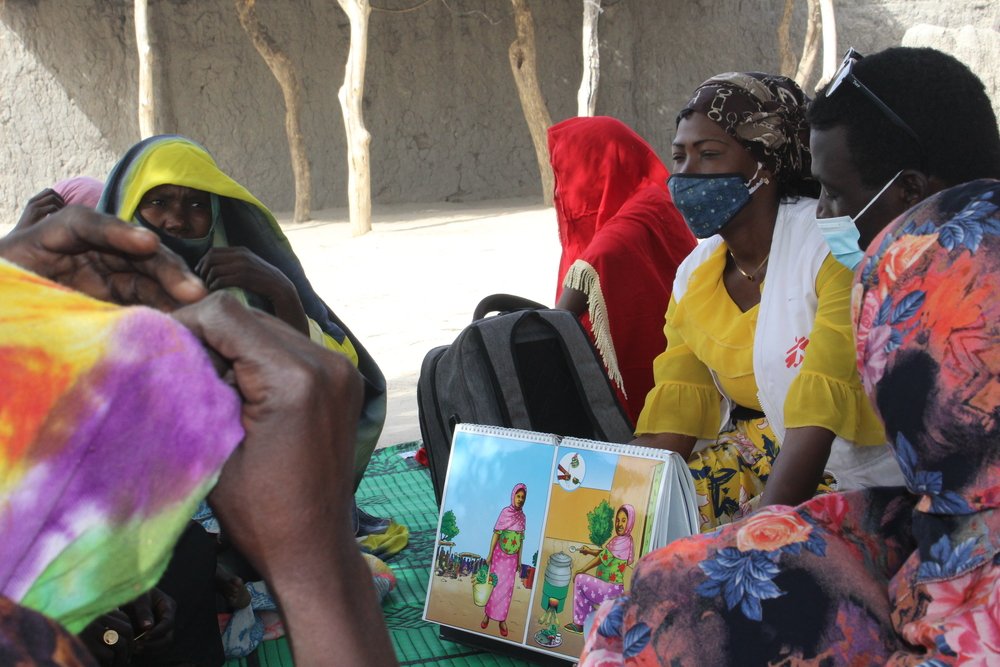 MSF launched a nutrition response in Chad’s Hadjer Lamis province in September 2021, after receiving an alert about a significant number of severe acute malnutrition cases in the area- more than 28,000 predicted for 2021 - and learning that only one of the province’s five health districts was receiving support.

Malnutrition is a recurrent, chronic crisis in Chad, and especially affects children under five and pregnant and lactating women. 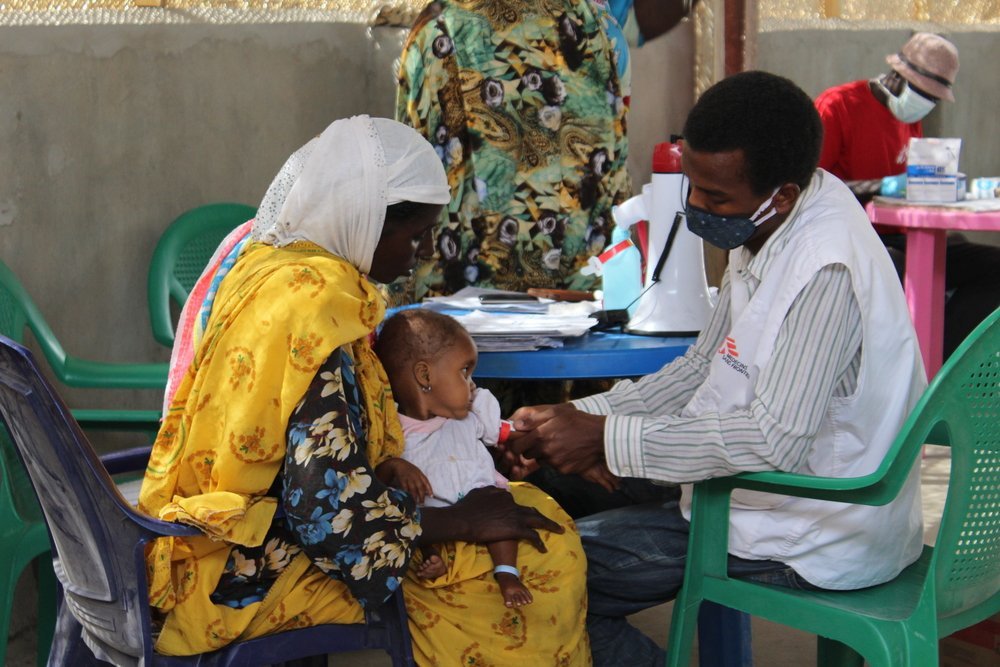 The causes of malnutrition are complex, and include poor harvests, inadequate dietary choices as well as socio-cultural factors.

This year, the situation has been exacerbated by an unusually short rainy season.

“There was very little rain this year. It was worse than any year I remember."

“We hardly harvested anything. We need to buy vegetables at the market, but everything costs almost twice as much now."

"We don’t have enough to eat.”

Food insecurity is not the only worry of people living in this arid, inhospitable region.

An even bigger concern for many is a lack of water. 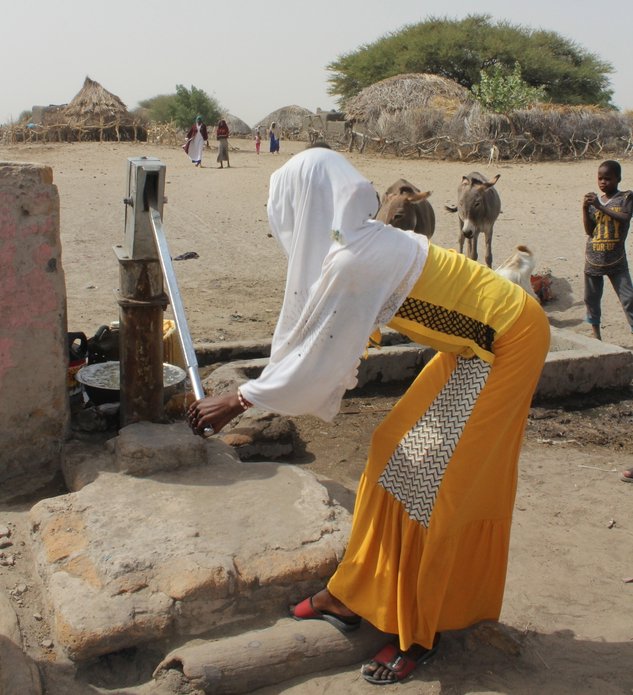 A young girl pumps water in a village near Massakory in Hadjer Lamis province, Chad. (December, 2021).

“We have two wells in my village, but it’s not enough for all the people and animals."

“The water tastes bad, we mostly give it to the animals." 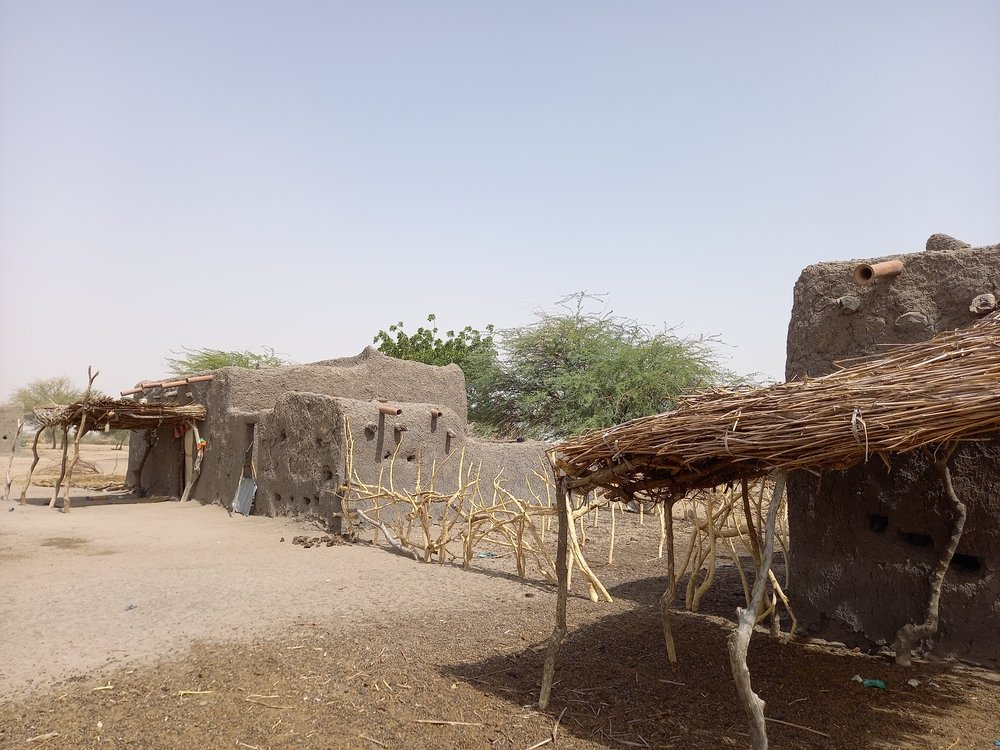 "To get drinking water, I go by donkey to another village."

"It takes me one-and-a half hours each way.”

The bad quality of the water causes diarrhea and other health issues, increasing the risk for children of being malnourished. 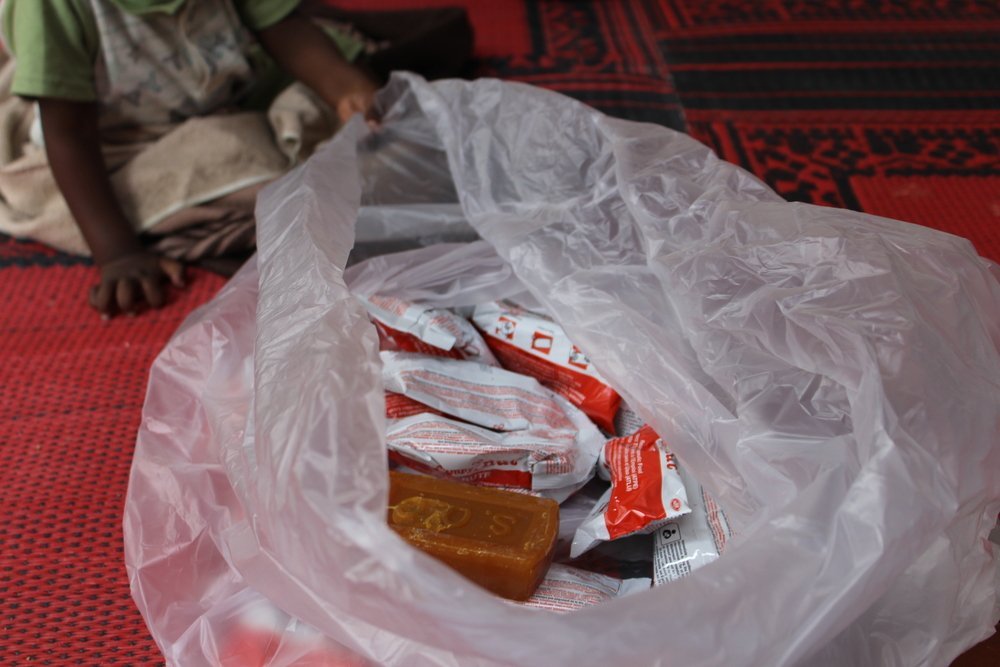 Claudia Blume/MSF
Mothers take home a week’s worth supply of Plumpy’Nut packages that they will feed to their children enrolled in MSF’s nutrition programme. (December 2021).

Besides treating children in therapeutic feeding centers in seven health districts of the province and supporting the treatment of severely malnourished children in Massakory hospital, MSF teams also visit remote villages in the area to teach mothers how to prevent and detect malnutrition in children.

Health promoters show mothers how to use MUAC bands, a colour-coded paper band that is wrapped around a child’s arm and indicates if a child is healthy, slightly or severely malnourished.

When the MSF teams arrive, they find mostly women, children and older men. 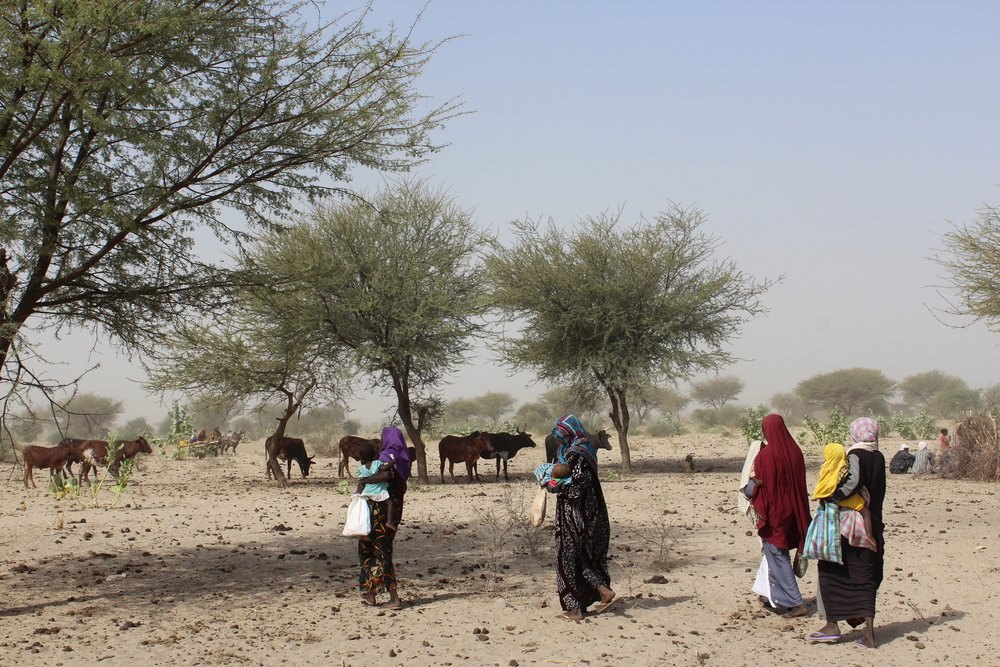 Claudia Blume/MSF
Much of the local economy depends on the rearing of livestock such as cows, goats and camels. (December, 2021).

Many younger men have left to find work in other parts of Chad or in neighboring countries such as Cameroon, Niger and Libya. Others have taken their cattle to the south of the country, in search of better pastures.

Afraid of the future

Most men will return for the next planting period. 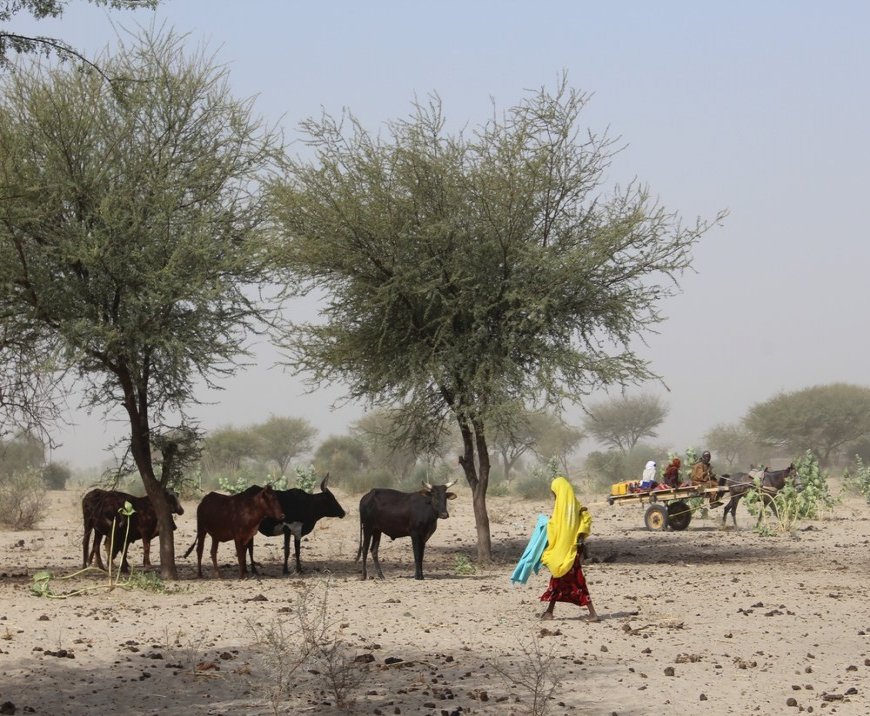 Claudia Blume/MSF
Because of a lack of rain and a very bad harvest this year, it has become difficult for farmers to feed their animals. (December, 2021).

This temporary migration is a coping mechanism that is not new, but 50-year-old Osman Abakar says that this year, the young men left earlier than usual due to the bad harvest.

"We are afraid of the future”

“All we can do is wait for the next rains."

"If the rain abandons us another time, we don’t know what to do.”

Claudia Blume/MSF
MSF health promoters teach parents how to use a MUAC band to determine if their child is malnourished. (December, 2021).

MSF received the alert relatively late, after the most acute phase of malnutrition in Hadjer Lamis, and while the team has treated more than 1,600 children in outpatient therapeutic feeding centers in the first 15 weeks, the team is also preparing for next year.

“There is some fear that the worst is yet to come, that the hunger gap will start earlier than usual and that it could be longer and more severe,” says MSF’s medical team leader Ibrahim Barrie. 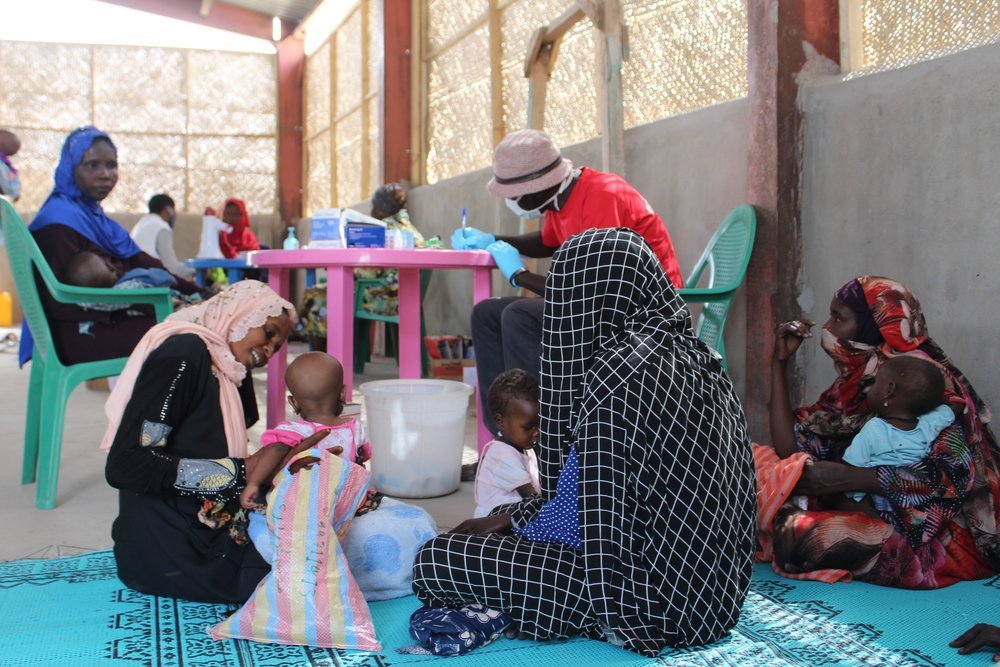 “It’s a continuous crisis, no longer just a hunger gap. At the same time, funding for nutrition and food security in Chad has gone down."

"We need a better aid response to prevent children from dying from malnutrition.”

The Sahel region is considered one of the world’s most vulnerable to climate change, with rising temperatures, erratic rainfalls and increasing desertification. Over the last ten years, Chad’s Saharian and Sahelian zones have spread 150 km south, resulting in reduced farming and pasture areas.