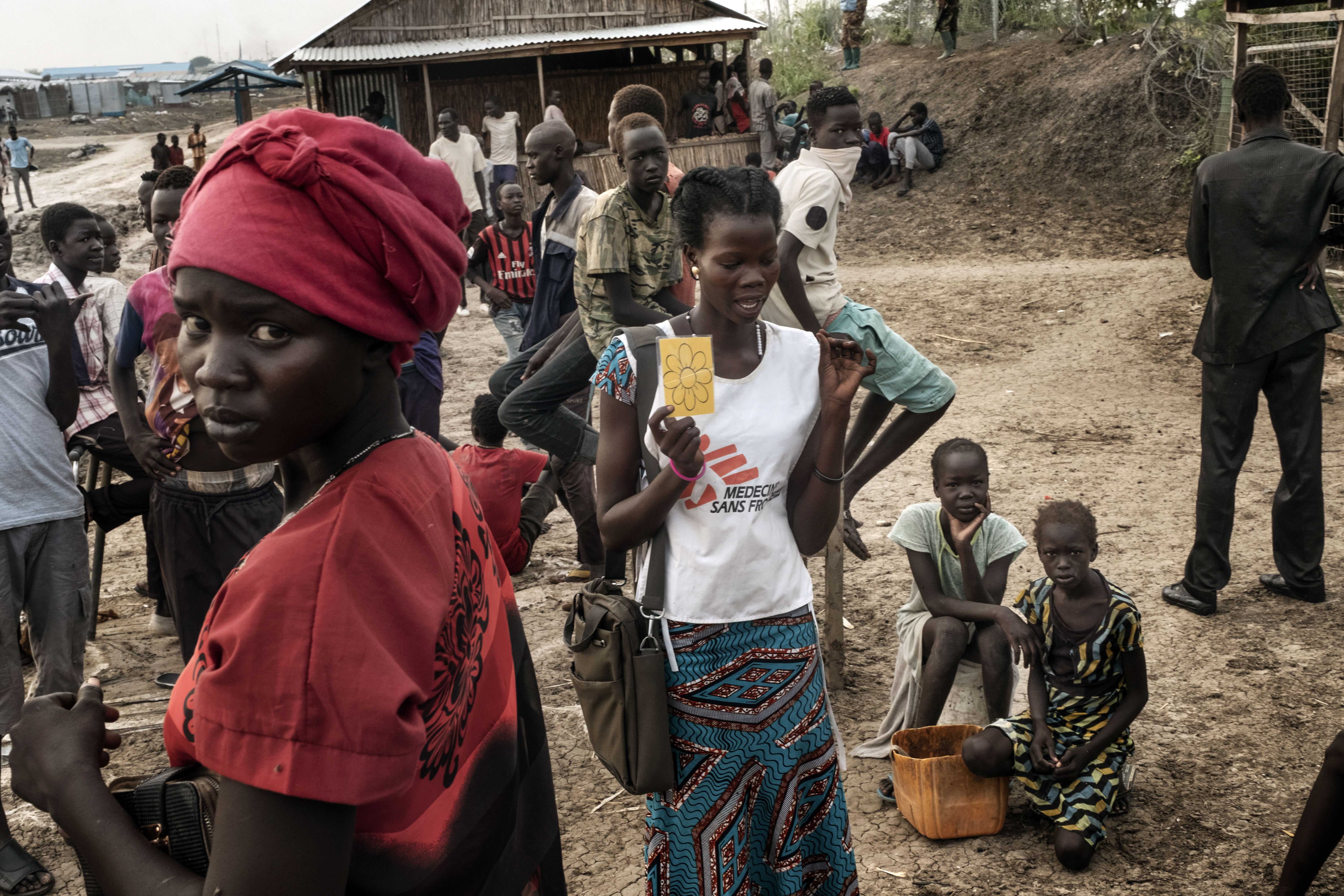 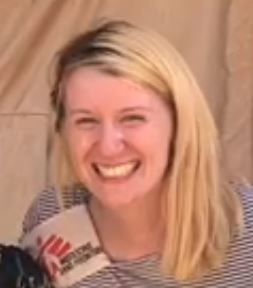 International Women’s Day in South Sudan: ‘Every story of what these women have been through remains as shocking as the first’

Jennifer Collins is a nurse from county Wicklow who worked as a nursing activity manager for the Emergency Room, inpatient departments and HIV/TB outpatient department for Médecins Sans Frontières/Doctors Without Borders (MSF) in Bentiu Protection of Civilians site in South Sudan.

On International Women’s Day, I cannot think of a more poignant place to be than where I am writing this. The Bentiu Protection of Civilians (POC) site in South Sudan is a melting pot of cultures and survival practices. The women of the camp have survived internal displacement, many have survived gender-based violence and the loss of their families while continuing to provide basic care to their remaining family. Despite this, the role of women within the country remains less valued than that of their male counterparts, often to their detriment. My time working with this population of women has shown me that despite all they have experienced, they endure.

Over the course of my mission, while visiting a patient with TB in his home, I became mesmerised by the work of his wife *Nyandul. The patient had been supported with his TB medication in the community by MSF TB counsellors and outreach team, however required additional support with symptom management. Every morning I arrived to find her grinding sorghum using a large stone, an immensely difficult task, before using it to prepare a morning meal for her husband, two sons, her widowed sister-in-law and her children. With her husband ill, Nyandul is responsible for caring for her family alone while simultaneously encouraging her husband to take his medication and attending the MSF hospital to collect the medication every week. Even lighting a fire to cook the food for Nyandul means leaving the relative safety of the camp to cut wood for charcoal miles from the POC border. Many women from the camp have been victims of attack or rape while on these trips to complete basic household tasks. This also means that children are left unattended daily which can lead to accidents causing severe causalities such as burns, dog bites, snake bites and unfortunately also fatalities.

As her war-widowed sister-in-law had not previously been a resident of the camp, she and her two children were not registered for food rations. This meant Nyadul was forced to stretch the rations intended for three people amongst seven. During these visits I watched Nyadul carefully dish out the Sorghum she had prepared while always waiting until the others had eaten to serve herself. On occasion, this meant she went without food. During this period, the sector that their home was in had been cut off from water so Nyadul and her sister-in-law had to carry huge loads of water from another sector every day. Despite these hardships, every morning I arrived to a huge, welcoming smile and laughter when she greeted me as her “Nyakawai (white) sister“ 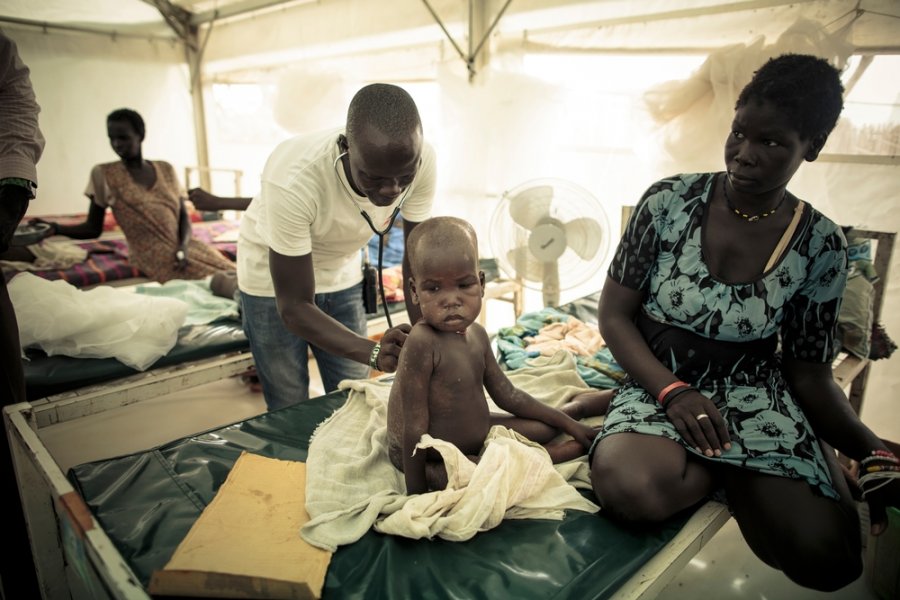 Rogier Jaarsma
The MSF hospital in the Bentiu Protection of Civilians camp.

Nyadul’s attitude is typical of the South Sudanese women I meet. Within the hospital, there are countless examples of this daily. The MSF hospital is the only facility within the camp to offer secondary healthcare services; providing lifesaving surgeries including burn management, inpatient care for adults and children, and outpatient follow-up for people with HIV & TB.  As the only facility for these services many of the women have travelled by foot in scorching temperatures from outside the camp to bring their children to the hospital, yet warmly greet our hospital staff on arrival. Young teenage girls arrive, after travelling by foot for days, to care for unknown male relatives, as their culture dictates, yet do so with fervent dedication. Elderly women being treated within the inpatient department, who have lived through generations of war and who are often in excruciating pain quickly sit up and don their dresses when the ward round arrives, to preserve their pride and sense of self.

Within the hospital we see and hear so many accounts of horrific traumas faced by these women, yet when encountering these women daily, it is hard to believe that they carry with them such hardship. Every story of what these women have been through remains as shocking as the first.

Unfortunately, at times this hardship does become glaring obvious. Of the numerous women who come through our emergency room, many arrive severely under nourished, some have severe psychological trauma and others have fresh wounds from beatings that lie on top of old wounds. To help psychosocial support is provided by sexual and gender-based violence (SGBV) specialists and the team of mental health staff is on hand as soon as they arrive to the hospital. These teams provide targeted support for mental health emergencies such as post-traumatic stress. With each of these cases, the importance placed on the women in this society is vividly clear. Some of these cases require admission within the hospital for acute conditions.

Many women have lost everything they own time and time again. Yet each time they leave the hospital shaking the hands of our staff with gratitude.

I feel that within the world of humanitarian work we talk so much of “building resilience” yet I cannot believe there is a more resilient group of people than the women of South Sudan. My South Sudanese colleagues in our project have often told us a traditional saying when an international staff member is leaving; “mountains never meet but people do”. This saying highlights how grateful we should be for the people we meet in our lives. I feel so privileged to have met so many of the women of Bentiu POC and hope that their future is a place where they are shown the value and respect they so rightly deserve.

*Names have been changed to protect people’s identities.