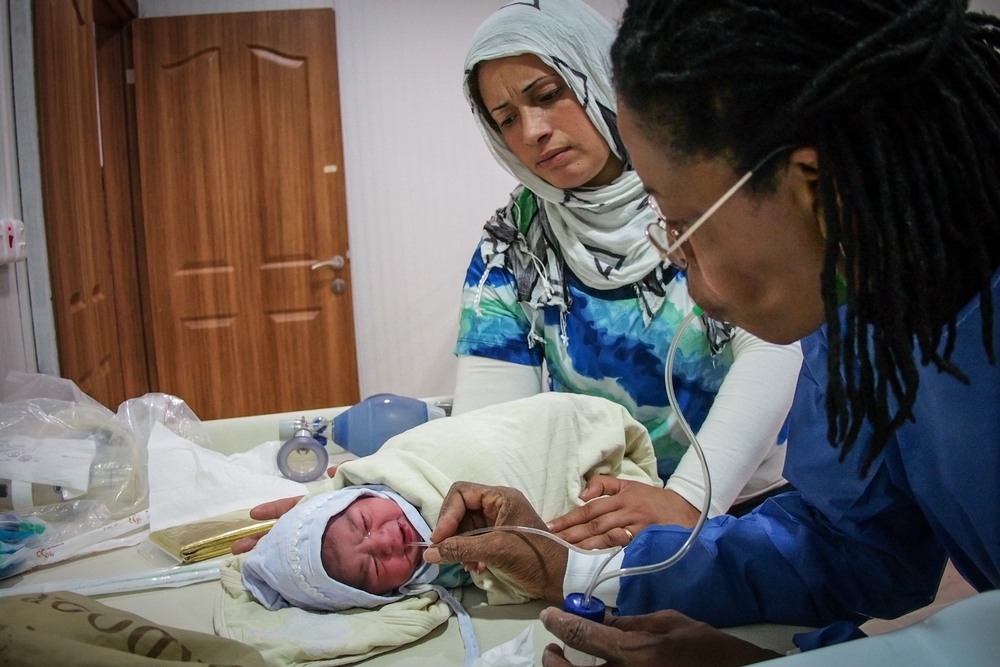 Just a few weeks after opening its doors for the first time on 4th August, the maternity unit in Domeez refugee camp, in northern Iraqi Kurdistan, is crowded with Syrian women, many of them bearing children.

All have chosen to take advantage of a range of maternity services – from antenatal check-ups to postnatal vaccinations – provided by staff who are themselves refugees.

Domeez camp, which lies some 10 km south of the main city of Dohuk, was initially planned for a population of 30,000. Three years on it houses double that number, making it the largest refugee camp in Iraqi Kurdistan.

As the months have gone by, and with little hope of its residents being able to return to their homes, the settlement has come to resemble a lively Syrian town, with tuktuks taxi-ing people around and shops selling everything from shawarma to computers, haircuts to wedding dresses.

As marriages and births have multiplied, and the camp’s population has grown, so has the need for a dedicated maternity unit. An estimated one in five of the camp’s residents is a woman of reproductive age, and an estimated 2,100 babies are born in the camp each year.

As a result, Médecins Sans Frontières/Doctors Without Borders (MSF) decided to expand its healthcare services in the camp, which it has been running for the past two years.

“Our clinic used to provide basic reproductive care services, but women had to go all the way into town to deliver in a very crowded hospital,” says Dr Adrian Guadarrama, MSF’s medical team leader in Domeez.

“But with the new maternity unit up and running, now we only need to refer high-risk pregnancies to Dohuk, taking much pressure off the hospital.”

Golestan, a proud mother of three, is resting in bed, her newborn son, tightly wrapped, lying next to her.

“I gave birth in Dohuk hospital last year as there were complications,” she says “Here I’ve been encouraged to stay in bed for a few hours, nurses check on me... it’s like being back in Syria, only it’s free of charge,” she says.

Helping women through childbirth is just one aspect of the care on offer. “Besides helping women to deliver safely, we also ensure proper follow-up – from the beginning of the pregnancy all the way through to postnatal consultations,” says Dr Adrian Guadarrama.

“This approach means we can also provide vaccinations, help with breastfeeding and offer family planning advice, all of which have a great impact on the wellbeing of mothers and children.”

Before the maternity unit opened, many Syrian women in Domeez chose to give birth in their tents within the camp, rather than travel to hospital in Dohuk.

“I called in a Syrian midwife to help me give birth at home, and all went well,” says Zozan, who has come to the new unit for vaccinations seven months after giving birth. “But it would have been better to be close to doctors: in a tent there is always a risk,” she says. The local authorities have now stopped issuing birth certificates to babies delivered at home.

The maternity unit was set up in record time, with the help of local health authorities. “It all happened very fast,” says Dr Adrian. “We presented our proposal, the authorities approved it immediately and then provided the building materials and all the medical equipment.”

The unit is midwife-led, and many of the new staff have had to adjust to a different way of working.

“The main challenge has been finding and training midwives,” says MSF midwife Marguerite Sheriff. “Many are used to working in the shadow of doctors. I kept telling the midwives that one day they would be running the place and they could hardly believe me.”

Marguerite believes that the first step is always to take time to examine patients and listen to them. “We have been teaching our new midwives a more holistic approach to birth,” she says.

Travelling long distances to give birth

The staff have a close connection with their patients, as most are refugees from Syria. “We employ Syrian staff, people who are themselves refugees,” says Dr Adrian. “Our team currently includes a gynaecologist, nine midwifes and four nurses, who between them provide round-the-clock care.”

Health promoters have been crisscrossing the camp to tell women about the services on offer, while word of mouth has also been instrumental in attracting women to the new unit.

Its opening also made the front page of the camp’s local paper. Women are now travelling some distance to give birth here.

Ahlam, who is preparing to leave the unit with her newborn baby, is registered in Gowergosk refugee camp, some two hours’ drive from Dohuk.

“I heard from my sister-in-law that there were Syrian midwives and a brand-new maternity unit,” she says, “so I moved here a few weeks ago just to be able to give birth. Once I feel stronger I’ll go back to Gowergosk.”

Already there are five births each day in the new maternity unit. “So far we are coping,” says Dr Adrian, “but our limit is seven deliveries each day. Given the great demand, we are already studying the option of further expanding our operations.”

As well as the growing camp population, the Dohuk area has also seen large numbers of displaced Iraqis arriving in recent weeks after fleeing the advance of Islamic State militants, and the hospital in Dohuk is struggling to deal with escalating patient numbers.

“Dohuk hospital has come under increasing pressure, particularly since the new influx of thousands displaced people arriving in the area,” says Dr Adrian.

Among the women in the busy waiting room is Vian, who recently fled her home in the Iraqi city of Sinjar. She arrived in Dohuk after a harrowing journey with her husband and her two children. A couple of months pregnant and feeling sick, she visited Dohuk hospital.

“The hospital staff were all too overwhelmed to give me much attention,” she says. “I don’t know if I’ll give birth here, as I don’t know what the future holds. I can’t sleep at night for thinking about everything I have left behind.” 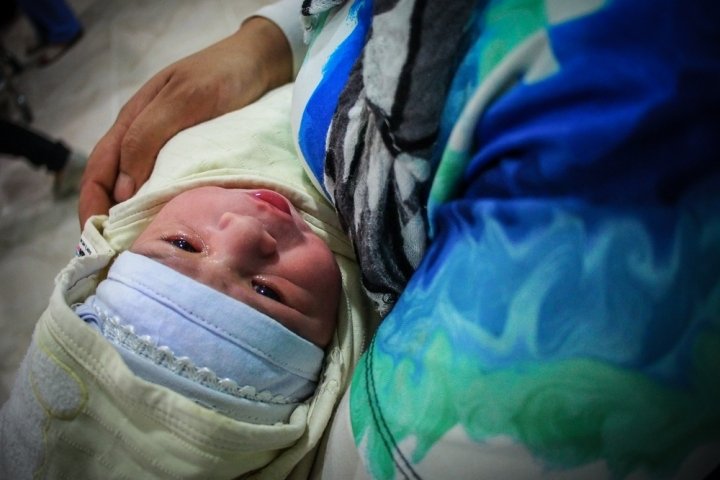 While MSF’s health services are open to everyone, currently the only people authorised to enter Domeez camp are refugees from Syria.

But with violence spreading across Iraq and Syria, and waves of people fleeing their homes for safer areas, Dr Adrian hopes that MSF will soon be able to support the local health system by providing maternity care on a regular basis to the newly displaced people and the local population, in addition to Syrian refugees living in Domeez.

“Sharia, a town full of displaced people from Sinjar, is just across the road from Domeez camp,” says Dr Adrian.

“We are proposing to put in place a referral system that would allow our doctors running mobile clinics in Sharia to send women in need to the maternity unit in Domeez.”

As one crisis follows another the new challenge for MSF is to find ways to provide services that will benefit both refugees and internally displaced people.

Find out more about MSF’s work in Iraq