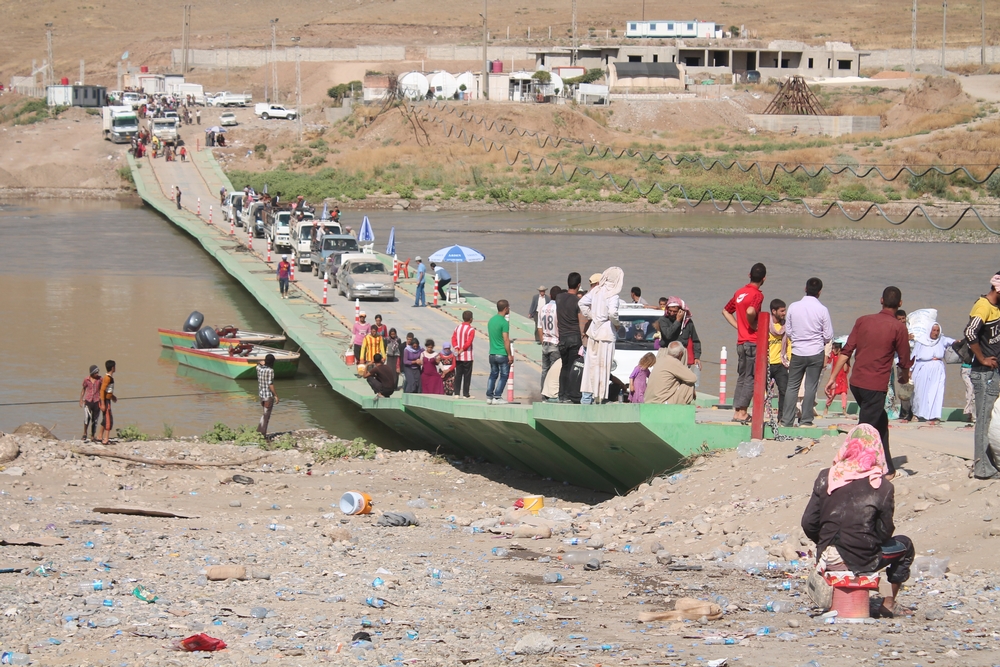 Eleven days after militants from the Islamic State (IS) group stormed the district of Sinjar in Ninewa governorate, Iraq, a constant stream of thousands of exhausted people are crossing into Syria every day. They are heading to the relative safety of the northern border between Syria and Iraq.

15/08/2014: Listen back to MSF, head of mission, speaking from the Iraqi-Syria border on Morning Ireland.

Walking for 7 hours, in temperatures over 50 degrees

Teams from the international medical organisation Médecins Sans Frontières/Doctors Without Borders (MSF), working on both sides of the border, are rapidly responding to the urgent health needs of the people who have fled by running mobile clinics and setting up health facilities in transit camps, as well as in camps for IDPs (internally displaced people).

An estimated 200,000 people have fled their homes since 3 August. In temperatures of 50 degrees and above, thousands of civilians have walked seven hours across the mountains to reach Syria followed by a rough ride at the back of trucks to the closest border crossing back into Iraq up North.  Many others remain stranded in Iraq’s Sinjar mountains, unable to escape for fear of violence from IS forces who are surrounding the area.

‘With the help of local relief organisations, we have so far distributed over 20 tonnes of food as well as 60,000 litres of bottled water  at three transit points along the way to the border crossing,” says Dr Gustavo Fernandez, MSF programme manager.

”We have also managed to send food and water supplies to people still stuck in the Sinjar Mountains and we are now looking at the possible ways to deliver medical supplies there.’ 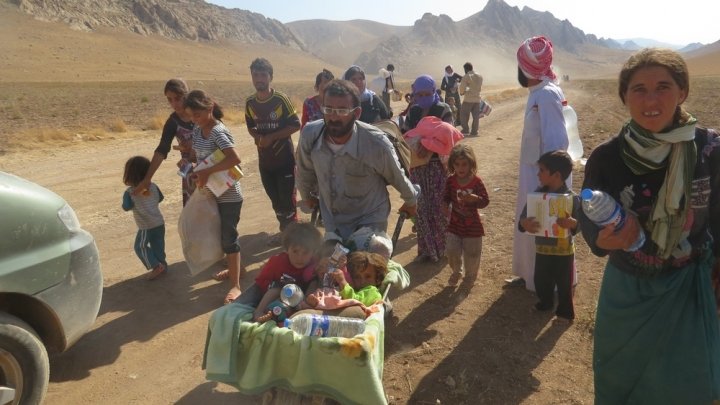 Escaping after days under siege, civilians in Sinjar mountains receive bottled water and biscuits supplied by MSF and a local association.

MSF is also running two health posts for first aid and rehydration at a transit point as well as in a transit camp where over 10,000 people have already gathered. People in need of further medical care are referred to a local hospital where an MSF team is supporting the provision of surgical care, and obstetric and paediatric services. MSF has put in place a referral system using three ambulances on 24 hour call for referrals of wounded or extremely sick and exhausted patients to the hospital.

Since the beginning of this recent wave of displacement, MSF medical teams have provided first aid and rehydration for around 1,000 Iraqis, and provided surgery to 147 war wounded people.

From Iraq to Syria to Iraqi-Kurdistan

Since the onset of the violence, over 60,000 displaced people transiting through Syria have crossed back into the still safe Kurdish controlled region of Iraq. They follow this long and tortuous route in order to go back to their country and reunite with their families, but after many days under siege not all of them complete the trip.

“At least six people have died in transit due to dehydration and exhaustion in the last three days, and many more have reportedly passed away in the besieged areas of Sinjar,” adds Dr Fernandez. “With the situation increasingly critical throughout the country, access to people who are trapped in conflict areas is impossible.”

Surgery for war-wounded Iraqi patient.  Since the beginning of this wave of displacement, MSF temas have operated on 147 Iraqi patients.  Favila Escobio/MSF

Due to the deteriorating security situation, MSF was recently forced to suspend its medical activities in Tikrit in the northeast of Iraq and put on standby its mobile clinics in areas between Erbil and Mosul. In a constant effort to provide medical assistance to the displaced, MSF has just started to run a mobile clinic to Baharka Camp, north of Erbil city. Over 1,000 individuals are currently staying in the camp, with the population rapidly expanding.

The recent wave of displacement adds to an existing displacement crisis in Iraq. Prior to this influx of IDPs, the Kurdish region was already hosting over 350,000 IDPs as well as 230,000 Syrian refugees.

The number of IDPs in the whole of Iraq is estimated at 1.2 million, including around 500,000 people displaced due to the conflict in Anbar, the majority of whom are still within Anbar province, suffering from a severe lack of access to health care and other needs. In Anbar’s city of Heet that hosts 80.000 IDPs, MSF provides medical support and human resources for outpatient consultation in a hospital.

Despite the ongoing conflict in Iraq, which has made it very difficult for humanitarian organizations to work in the country, MSF is striving to provide medical care to the Iraqi people. MSF has worked continuously in Iraq since 2006. In order to ensure its independence, MSF does not accept funding from any government, religious committee or international agency for its programs in Iraq, and relies solely on private donations from the general public around the world to carry out its work. In Iraq, MSF currently employs over 300 staff.