Diana Pulido's niece needed an emergency blood transfusion. Bleeding heavily after her baby was delivered by caesarean, she needed to reach a hospital where the lifesaving treatment was available. But her family could not afford to get her there. "A private individual was charging us US$400 just to take us from Tumeremo to Ciudad Bolivar,” says Diana. “At a time like that, where do you get that kind of money?" 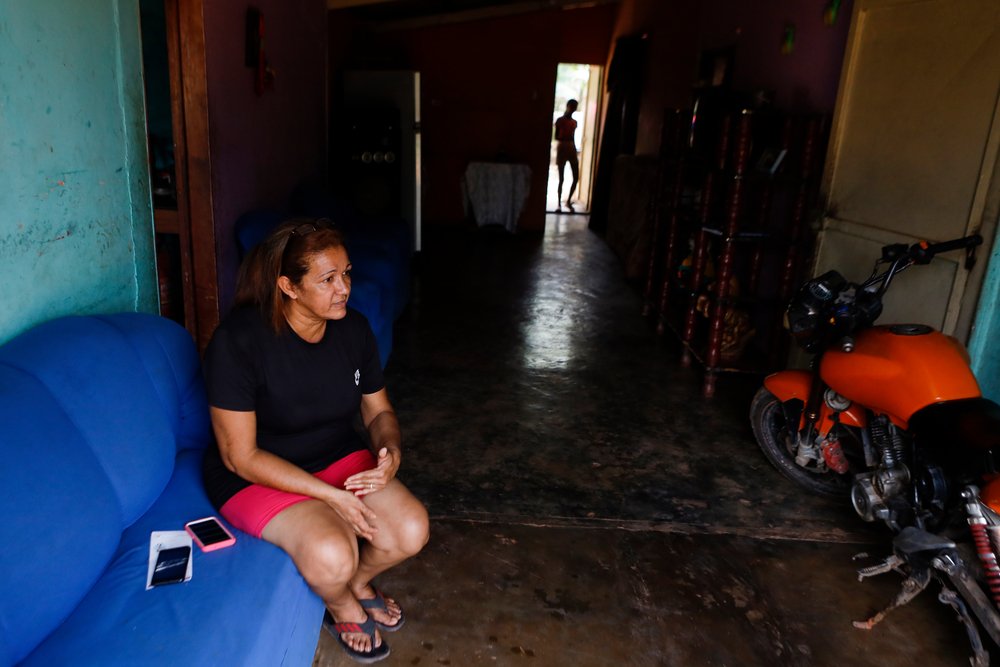 The journey from José Gregorio Hernández hospital, in Tumeremo, to the Ruiz and Páez hospitals in Ciudad Bolivar, 300 km away, takes more than six hours. The young woman's hemoglobin level was at five, signalling that she needed the transfusion urgently, so there was no time to lose. "We found out about the ambulance from the social work staff at the hospital,” says Diana. “The journey was terrible. The anguish of thinking that she might not make it there alive made it feel endless.” 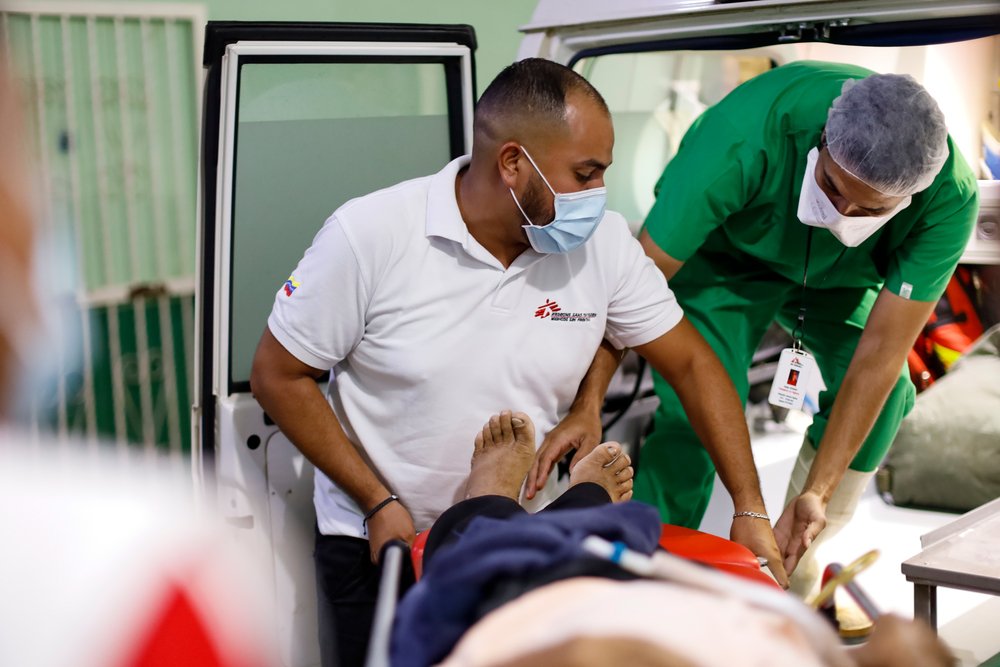 Soon after reaching the hospital, Diana’s niece received the transfusion, after which she was stabilised and given the chance to recover. “The people from Médecins Sans Frontières helped us with the ambulance,” says Diana. “The ambulance driver and the nurse who took us there stayed with us until she had been treated and stabilised. She stayed in hospital for five days. Today she and her baby are both well and at home, recovered."

Tumeremo is one of the most populated cities in Bolívar state. Known as "the gateway to the savannah" for its location near Venezuela’s largest plains, its economy relies heavily on gold mining. As a result, there is a constant stream of people from other parts of the country arriving to work in the area. Many end up living in poor conditions and have difficulty accessing health services, especially when they need specialist care.

"My niece's life was at risk and she had to be moved on an emergency basis.''

Diana has five children and nine grandchildren, almost all of whom work in the gold mines. She is currently recovering from malaria but plans to return soon to her job as a cook in one of the mines.

Bolívar state – one of the largest in Venezuela – is a region with poor roads and long distances. Fuel is expensive and often hard to find, so travelling in the región is not easy, even in a medical emergency. This is why MSF, working alongside local health authorities, decided to launch its ambulance service in 2021.

The ambulance is fully equipped with all the medical equipment and supplies needed. Ambulance staff transport patients from José Gregorio Hernández hospital in Tumeremo to various hospitals within a radius of 328 km of the city: Ruiz and Páez hospitals in Ciudad Bolívar, Uyapar hospital and Dr Raul Leoni general hospital in Guaiparo, and Gervasio Vera Custodio hospital in Upata. 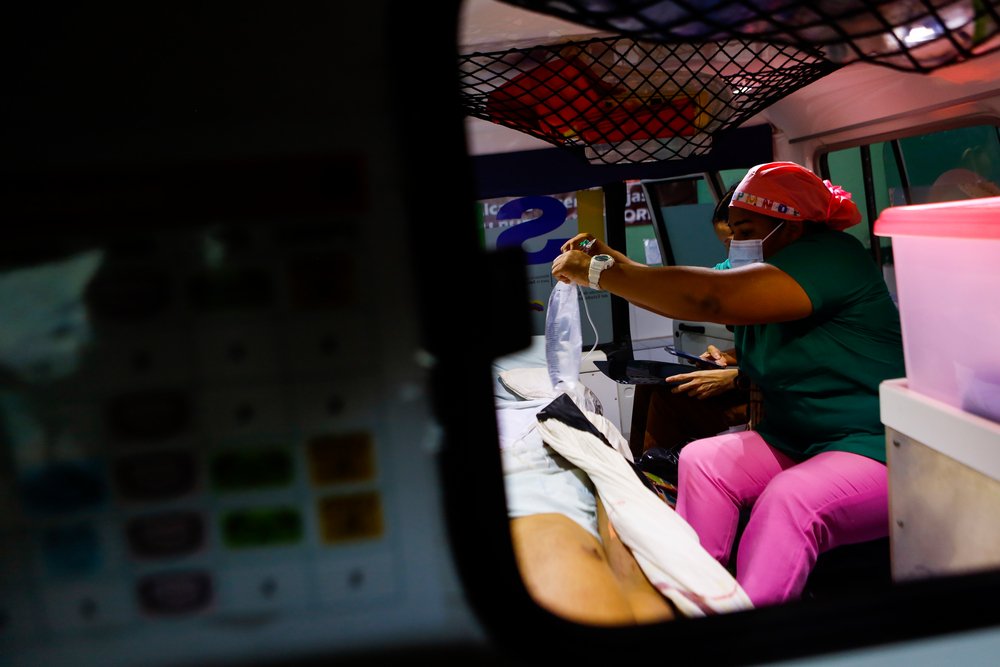 Three years ago, Keivis Varela moved from the capital, Caracas, to Tumeremo, where he joined MSF’s team of ambulance drivers. In that time, he has witnessed a lot of dramas, as well as experiencing the rewards of the job. "Months ago, I was transporting a young pregnant woman who had pre-eclampsia [dangerously high blood pressure],” says Keivis. “It was a critical situation. In the end, they managed to treat her in time. Then I saw her walking in the street with her baby. She didn’t recognise me, but the satisfaction I felt gives meaning to all the difficulties we face when saving patients' lives.”

''We help save their lives and there is no better payment than that.''

Driving an ambulance can be stressful work. "I remember one time in particular, when I had to transfer a girl who was seven years old, the same age as my daughter,” says Keivis. “She had fallen out of a hammock and, days later, she felt sick. When we took her to the hospital, she was diagnosed with internal bleeding. She had to be rushed from Tumeremo to Ciudad Bolivar." Two hours into the journey, the girl’s condition started to deteriorate. "I felt very helpless," says Keivis. "You want the journey to pass faster and the destination to be closer. But that’s not the reality.” 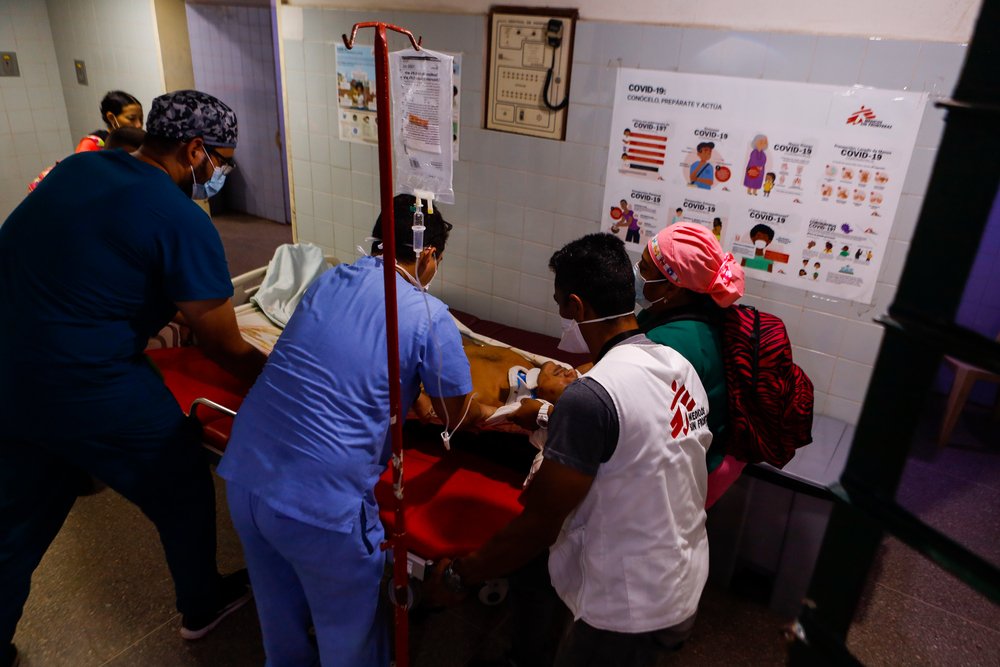 Despite the challenges, Keivis is pleased to be able to help people in their time of need. “If I had a heart of lead I wouldn't be in this job,” he says. “If we know of someone who needs assistance, we look for a way to help them."

Already, the ambulance service – which is available around the clock – is well used by the community. From January to August 2022, 235 patients were transported to hospitals beyond the city, one-third of them women experiencing complications in labour. The ambulance also transports patients with multiple trauma, cardiac disease and any other conditions that needs specialist care unavailable locally.

"MSF is very well accepted in the area," says Junior Rodriguez, one of the team of ambulance drivers, who comes from Tumeremo. "People already know the work we do. They recognise us on the road and in the villages we pass through when we are taking a patient to hospital. Most of the people we transport are acquaintances and neighbours. We have taken children, newborn babies, women and men. We help save their lives and there is no better payment than that."

MSF provides support to the José Gregorio Hernández hospital in Tumeremo, in Bolívar state, southeastern Venezuela. Working with the Institute of Public Health of Bolivar and Sifontes, MSF teams have also carried out structural rehabilitation of water and sanitation services; helped prevent and control infections; donated medical supplies and medicines; provided health staff; and strengthened  comprehensive medical consultations and sexual and reproductive health. During the first half of 2022, MSF teams cared for 41,997 patients, carried out 51,821 medical consultations and provided information to 32,568 people on family planning and how to prevent sexually transmitted diseases. MSF has also carried out training, supervision and supply activities to support the Malaria Plan in the Municipality of Sifontes, performing 74,987 rapid malaria tests and giving educational talks on malaria to 5,808 community members by the end of June 2022.