Malaria was a particularly serious issue in Niger last year, with a much higher and longer peak than usual. This was due to an extra-long rainy season with heavy downpours causing flooding, creating ideal conditions for mosquitoes to breed and extending the areas affected by the potentially deadly disease. This year again, teams from Médecins Sans Frontières/Doctors Without Borders (MSF) are working with key local health authorities to treat people for malaria.

It is early in the morning on an October day in Magaria, in Niger’s Zinder region, and the sun is already hot. It is harvest season and a few people are already returning from the fields, while oxen struggle to drag millet-filled carts through the sand.

In the village, Salissou opens his ‘consultation room’. He unrolls a mat and opens a white trunk, from which he brings out his equipment.

“I follow the same routine every day,” says Salissou. “I wake up early to go to work in the fields and then I come here to provide care for the children.”

Before he has finished emptying his trunk, the first patients of the day arrive

Salissou was chosen by the residents of his village, Gazabi, to work as a ‘community liaison officer’.

There are two of them in Gazabi to provide care for 500 children under five years old.

When children fall ill with common diseases such as malaria, diarrhoea or chest infections, parents no longer need to make the 9-km journey to the nearest health centre or turn to traditional healers or unlicensed drugs.

“During busy periods, I can see more than 20 children a day, and they mostly come for the same reason: malaria,” says Salissou, placing a thermometer in a four-year-old girl’s armpit. She is called Chazali and was brought here by her mother.

After a few minutes, the thermometer beeps. “Thirty-nine point five! I’m going to sting you a little now, but it won’t hurt too much,” Salissou tells the child, as he turns to his trunk and fishes out a rapid diagnostic test.

As he waits for the result, Salissou – known by the villagers as ‘the kids’ best friend’ – checks whether she suffers from malnutrition. He wraps a colourful ribbon around her bicep and measures her mid-upper arm circumference.

Ten minutes later, the rapid diagnostic test has a result: it is positive and Chazali has malaria. Salissou opens his trunk again and takes out some yellow tablets.

“She will take the first dose right here in front of me,” he tells Chazali’s mother. “Pay attention to how I do it: you’ll have to do the same until the end of the treatment.”

Malaria is endemic in some regions in south Niger, including Zinder. In 2020, the Zinder region recorded 17 per cent of all malaria cases in the country as per the health authorities. 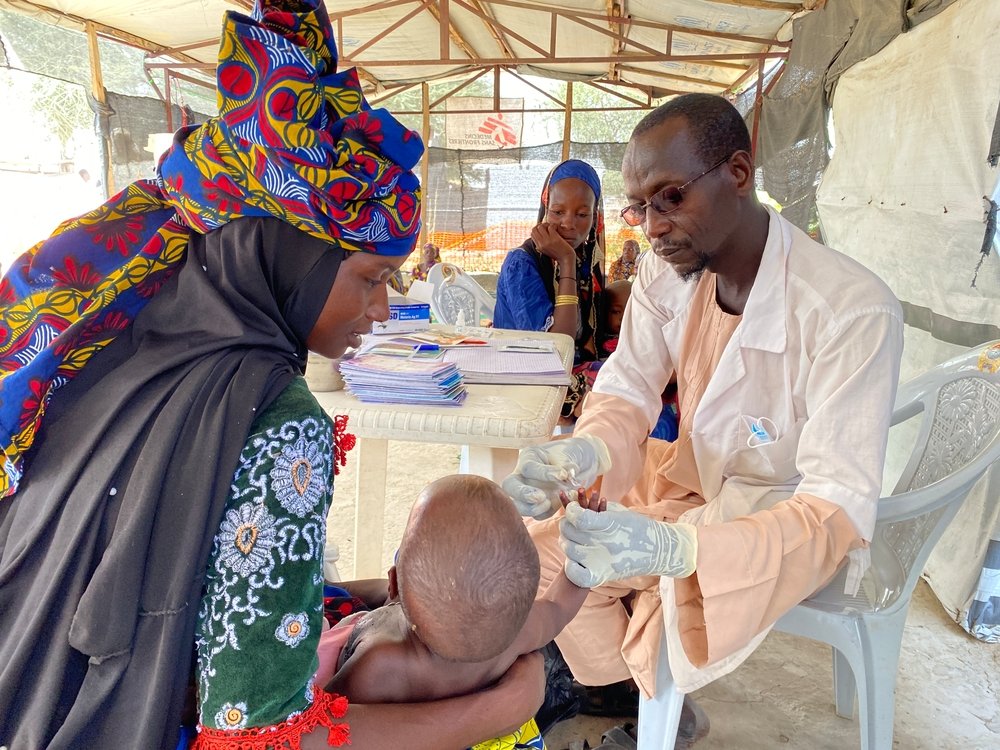 MSF/Mariama Diallo
In Garin Wazim, a displaced woman in consultation with her son suffering from malaria.

The four communes in which the activity is implemented cover more than 60% of the district of Magaria’s total population.

The aim was to facilitate access to basic healthcare for children under five living in remote villages and to prevent health complications.

“But people in some regions still struggle to access health centres to get basic care, and some of the clinics are not always fully functional or well-stocked with medications and other essential items,” says MSF medical coordinator Dr Georges Tonamou.

A race against time

During the malaria peak in September 2020, as many as half of all children who came for a consultation with community liaison officers such as Salissou tested positive for malaria.

“With diseases like malaria, the earlier we start treating sick children, the more chances they have of surviving. Unfortunately, our teams in the paediatric unit in Magaria have noticed that many children come to us very late and therefore in a much more serious condition.”

Magaria paediatric unit, which MSF has been supporting since 2005, is the referral centre for the district. Last year, it admitted 9296 children who needed inpatient care for severe malaria.

Most had been referred to Magaria through Niger’s decentralised health system, with community liaison officers playing a key part.

“If a child’s clinical state warrants more advanced care, community liaison officers refer them to the nearest health centre, from where the most severe cases are sent to the district hospital,” says Dr Tonamou.

MSF has provided a number of health centres with ambulances so they can transport patients to hospital free of charge.

“Otherwise people would have to pay to be transported by motorcycle or cart,” says Dr Tonamou.

According to the World Bank, close to 95% of the most vulnerable populations live in rural areas.

Back in Salissou’s ‘consultation room’, Chazali is reluctant to take the antimalarial pill, which has been crushed and mixed with water in a spoon.

Salissou ignores her protests and she swallows the mixture, then cries and pretends to be sick. Her mother takes her for a walk to take her mind off it.

“There’s a lot to do today!” says Salissou. Fourteen children are already queuing up to see him.

Giving back to the community

“People here trust us because they saw how we were trained by MSF,” says Salissou.

So far, MSF and the Ministry of Health have trained 278 community liaison officers.

The training lasts 10 days, during which the community liaison officers learn how to diagnose and treat common childhood illnesses, with a focus on malaria, diarrhoea and chest infections, and recognise warning signs that warrant a referral to the nearest health centre.

The training complete, MSF provides the community liaison officers with antimalarial drugs and the equipment they need to start providing consultations in their respective villages. 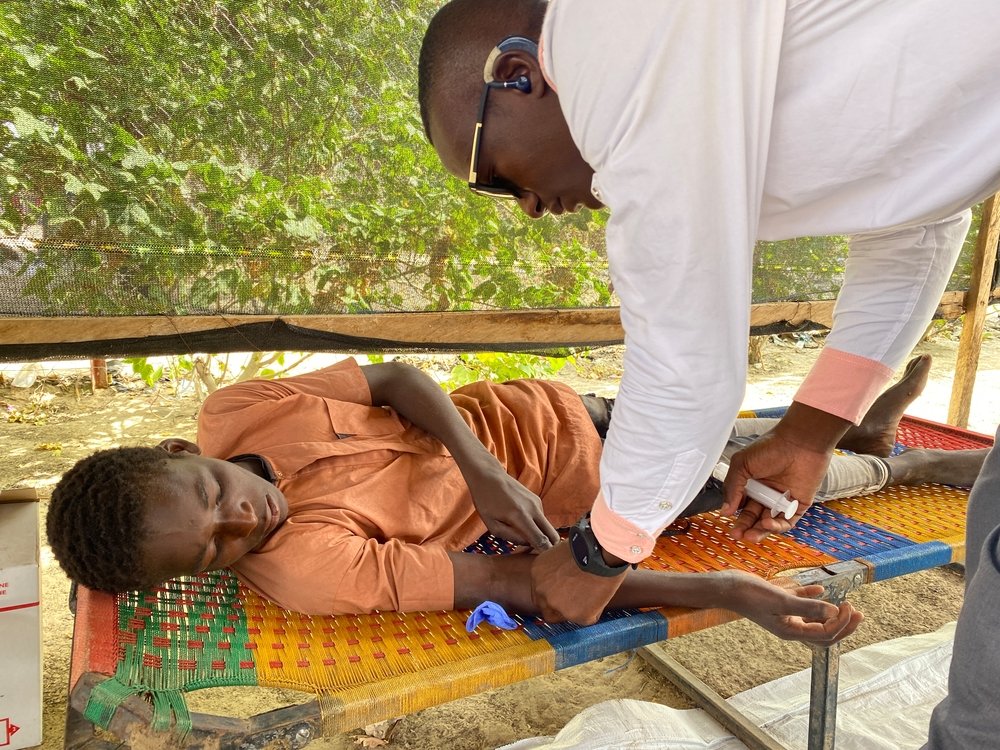 MSF/Mariama Diallo
The 15-year-old Bilal has malaria and receives treatment at Garin Wanzam, Niger, before being referred to Kinchindi. October 2020.

Salissou has two mentors: the head nurse at the local health centre and MSF nurse Malik.

Malik visits Salissou regularly to talk about his cases, check his activity report logbook, answer his questions and help him estimate the quantity of medication and other equipment he needs.

Salissou is not paid for his work but, as a thank-you for the service he provides to the community, his neighbours decide to gift him some millet – one tiya (around 3 kg) from each household.

The village chief has also arranged for the community to help build a consultation room for the two community liaison officers and to replace Salissou in the fields when he is receiving patient.

MSF has been working in Niger since 1985, where it regularly supports the public health system in dealing with epidemics such as malaria, cholera, measles and meningitis.

Today, MSF teams provide free, quality medical care to people living in the Agadez, Diffa, Tillabéry, Maradi and Zinder regions, as well as in Magaria and in Niamey.

In 2020, MSF teams helped treat more than 230,000 for malaria in Magaria health zone through Niger’s decentralised healthcare system. Half of these children were under five years old. 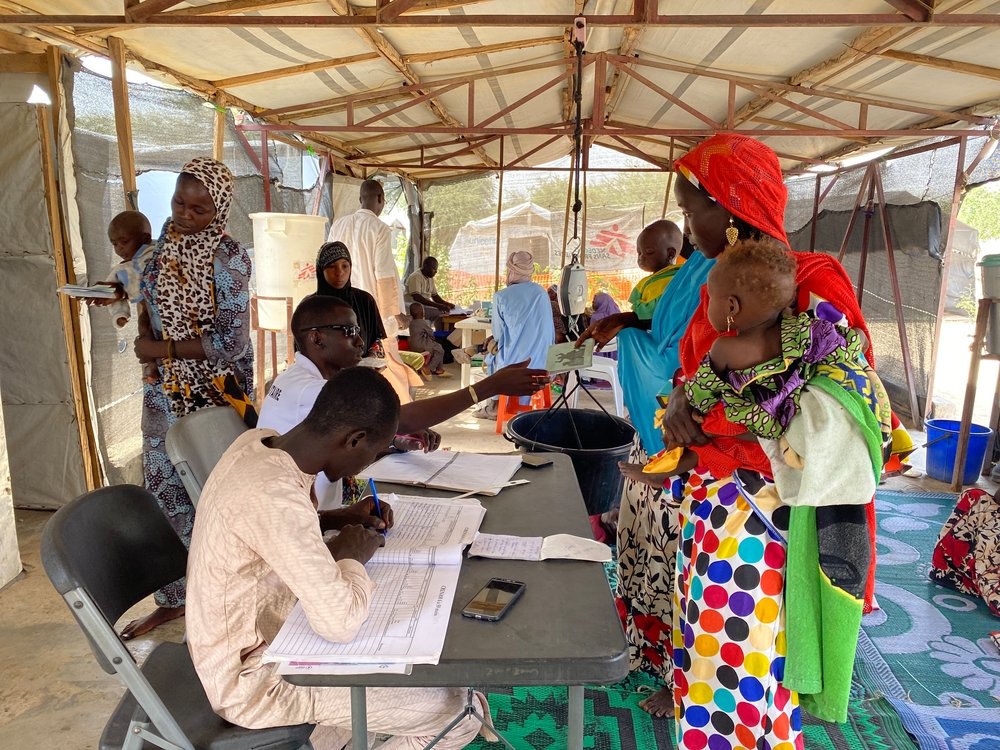 The care they received care took place in hospitals, through community liaison officers, in malaria sites, in observation centres set up by MSF, or in integrated healthcare centres supported by our teams.

Between the start of the project in May 2019 and the end of 2020, community liaison officers alone provided care for 158,000 children, almost 60 per cent of them with malaria.