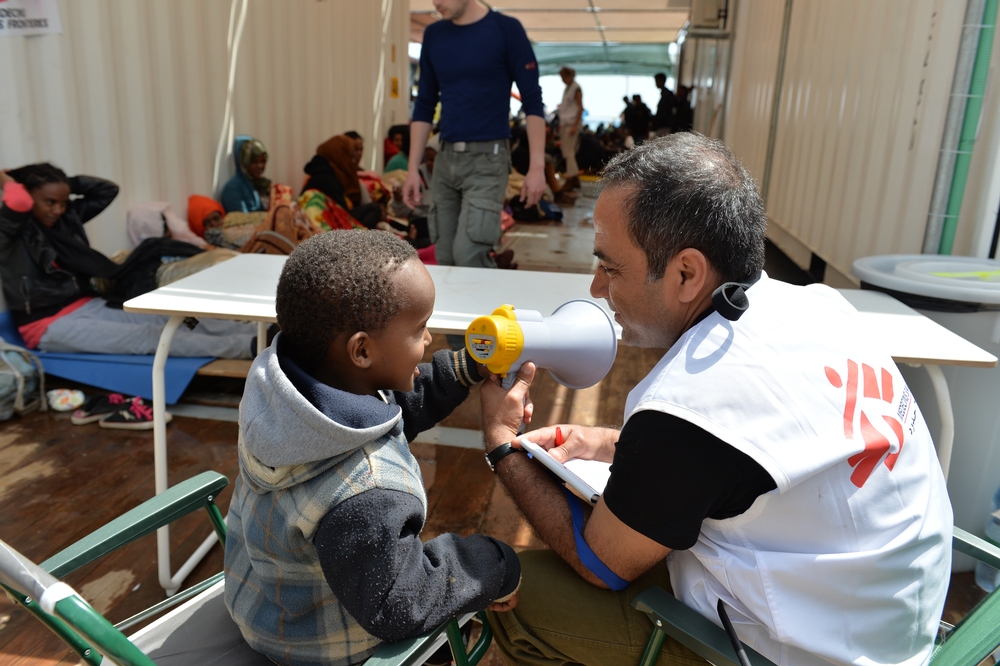 Search and rescue: A calming voice on a deadly journey

He describes what happens when the crew receives a distress call.

“We heard the news of the first shipwreck from the radio on board the Bourbon Argos. Our first and only desire was to go, as fast as possible, to the coordinates given by the radio, to rescue all those people who were drowning at sea. But we were eight hours away.

It was heart-breaking to realise that we wouldn’t be there in time; it hurt like a strong punch in the stomach. It was devastating to realise that all the naval ships deployed in the area where most people depart Libya would not be sufficient to cope with the high rescue needs.

I feel sick when I read in newspapers about how Europe intends to block people seeking safety – to build every kind of fence instead of rescuing and providing shelter.

Sara Creta/MSF
Ahmad on board the Bourbon Argos.

Suddenly, another radio communication — another distress call. This time a ship packed with 500 people heading towards Pantelleria, Sicily, asking us to provide them with milk for a two-year-old child.

His mother had no milk left to give to her son. I ask myself how she could have milk to give, after all she experienced in Libya and the deep stress of the sea crossing.

Then we head towards the search and rescue zone. As we sail, I think about the times I have been in the rigid-hulled inflatable boat (RIB) approaching a boat in distress.

This is an extremely delicate moment in a rescue operation. As a cultural mediator I go to sea with a precise goal: to communicate with the people who are about to be rescued.

First of all, I have to calm them down, to make them understand that nobody will take them back to the hell which they have left. When you are at sea, in front of an overcrowded rubber boat or an extremely precarious wooden ship, it is essential to understand as soon as possible the condition of people on board.

Sara Creta/MSF
Ahmad instructs people found floating on a rubber dinghy in the Mediterranean off the coast of Libya.

No return to Libya

It is a very delicate moment; everything has to be done with the maximum of calm. I look them in the eyes; the people look back at us. They are terrified, squashed up against each other in the boat. I always repeat loudly: “Stay calm, we will take you all to Italy.” It is important to state clearly that nobody will be taken back to Libya.

When we get closer, we try to work out which languages are spoken on board: it is essential to transmit a feeling of safety in order to stabilise the boat. I repeat that they must stay calm and not all move to one side of the boat. All of this happens while the RIB makes a 360-degree tour around the boat in distress.

I can’t get out of my mind the faces of the kids, who observe you, wordless, their eyes asking for help.

I clearly remember, during the last rescue, after we had said to people not to worry, lots of them looked up at the sky and thanked God for our presence. I said in Arabic, “Thank God you are safe,” and they gave the response in one voice.

Later, when I met them on board our rescue ship, people stopped me to give me a hug. I was the first person to speak to them kindly, probably the first person who had spoken to them since the smugglers had threatened them and forced them to step on board.

Sara Creta/MSF
Ahmad talks with a man rescued from an unsafe boat off the coast of Libya on the deck of the Bourbon Argos.

These people were treated like objects, deprived of their humanity. There is also the violence towards their loved ones, which they had to witness without saying a word.

I realise how, more and more, the violence in Libya is increasing: each rescued person with whom I spoke reported stories of violence and death – during the desert crossing, the detention in Libya and the sea route.

Often, when I lie in my bed, I think about the children who have been put on precarious rubber boats. I think about how, when I drive my children to school, I fasten them securely into child seats in my car.

And then I think of a mother or a father going on one of these boats: what do they say to their children, how can they make them feel safe during the sea crossing in the dark of the night?”

Find out more about MSF's response to the European refugee crisis