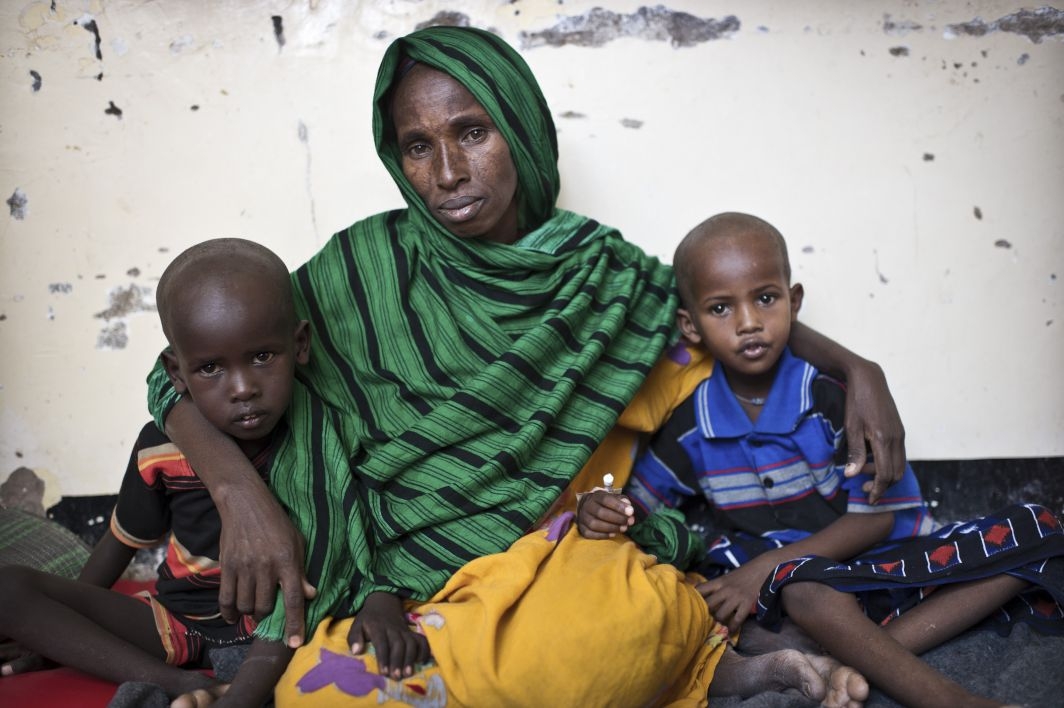 Somalia: Striving to reach the most vulnerable

Médecins Sans Frontières (MSF) has redoubled its efforts to reach those most in need in Somalia, where it has been working for more than 20 years. The international medical organisation has increased its capacity to treat malnourished children in its nine projects across the country in response to the recent rise in malnutrition levels. However, one month after MSF’s initial emergency response began,  progress in providing medical care outside Mogadishu is still slow. The restrictions placed upon MSF’s activities in southern and central Somalia , coupled with concerns about security in the capital, Mogadishu, have so far limited the expansion of its emergency medical activities.

Habiba Dahir Muse with her two sons Shafeer (4, left) and Abdikayr, (5, right). They came from Galgaduud region, about 160 kilometers from Galcayo. Her children were suffering from Diphtheria, two of her daughters died already. After their funeral she took the bus and brought her sons to the hospital. The transport money was collected among her community. After some days in isolation the boys are getting better and are now in the TFC (Therapeutic Feeding Centre) at the hospital MSF runs in Galcayo South. Habiba had 8 children in total, besides the two girls who died of diphtheria; one died after an explosion of an unexploded device and another child passed away after having diarrhoea. So half of her children have died.

Today our projects have moved into emergency mode

People in southern and central Somalia have been plagued by armed conflict, drought, and a lack of social services and healthcare for the past 20 years.  Alfonso Verdu, MSF’s programme manager  in Somalia, says: “The current nutrition situation comes  on top of the already immense unmet medical needs”.

MSF has been working to address  the unmet medical needs over the past 20 years. The organisation has set up numerous health projects providing a variety of services, including primary healthcare, care for mothers and children, tuberculosis treatment, secondary healthcare, war surgery and eye surgery. Today most of these projects have moved into emergency mode to provide assistance to communities weakened by a severe drought.

While MSF teams are prioritising treatment for malnutrition in Galcayo, Jowhar, Guri El, Dinsor and Marere, it is still proving extremely difficult to go beyond the gates of MSF’s established health facilities to reach the most vulnerable people. Verdu says: “Despite repeated efforts and negotiations, we have still  not been able to open new projects and develop new activities in southern Somalia.”

The situation is extremely volatile

In southern and central Somalia, MSF’s limited access to people in need is due to restriction on their movements by armed groups. In Mogadishu, however, the problems are related to the organisation’s concerns over the security of its staff. In the capital, the situation is extremely volatile and access to certain neighbourhoods is hindered by sporadic outbreaks of violence.

In Mogadishu, MSF’s medical teams are battling a deadly combination of measles and acute malnutrition, which particularly takes its toll on children. In the past two weeks MSF has set up two inpatient therapeutic feeding centres with the capacity to treat 145 children. More than 100 severely malnourished children with medcial complications have already been admitted to these centres, which provide intensive around-the-clock care.  In one of these centres, 38 per cent of the malnourished children admitted last week have been diagnosed with measles. Several mobile teams have set up outpatient therapeutic feeding centres to treat severely malnourished children who are not suffering from medical complications. Since 8 August, additional teams have vaccinated more than 16.000 children against measles.

In Mogadishu, as in the rest of Somalia, much more needs to be done to provide assistance to people living in some of the most difficult conditions on earth.