Juba, 19 January 2021 - Médecins Sans Frontières/Doctors Without Borders (MSF) is concerned about the situation in Riang, in Jonglei state, eastern South Sudan, where the health of communities is increasingly at risk.

In January, an MSF emergency team flew into Riang and found remote communities struggling to access clean water, safe water storage, latrines and basic healthcare. Years of protracted flooding and violence have taken a heavy toll on the region, making communities more vulnerable, particularly children under the age of five. 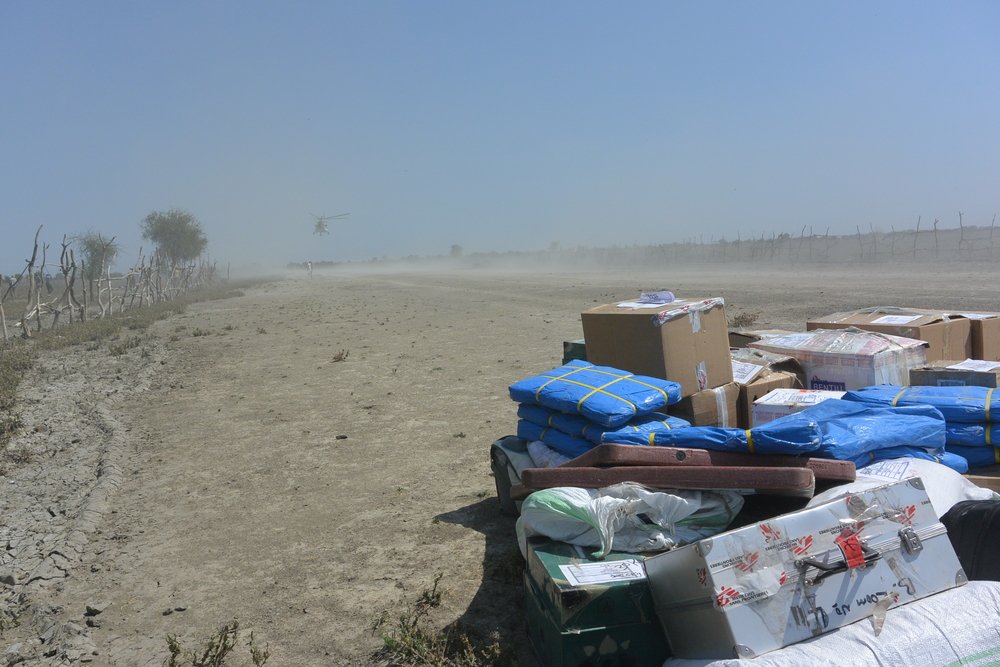 From 9 to 14 January, the MSF team provided medical consultations to roughly 770 people in Riang. They also distributed kits containing mosquito nets, blankets, buckets, soap, water purifiers and filters, and plastic sheets and ropes for shelters to over 1,000 families. 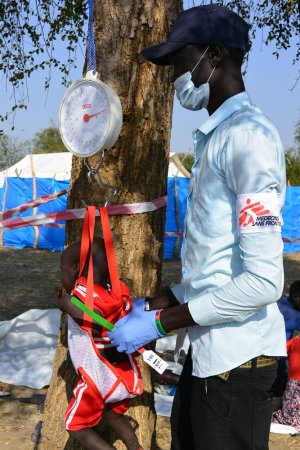 Damaris Giuliana/MSF
An MSF nurse aid weighs a baby before a medical consultation in the MSF mobile clinic set-up in Riang, Jonglei State.

In addition to providing dignity to flood-affected families, these kits help reduce their exposure to deadly illnesses, such as malaria, respiratory infections and waterborne diseases.

“A worrying 60 per cent of the children under the age of five treated in our mobile clinic last week tested positive for malaria; some of them were already in a severe condition. We also saw people suffering from untreated illnesses, including a large number of women with suspected urinary tract infections, which reflects the lack of drinking water,” said MSF emergency coordinator Roberto Wright.

“International donors have only ensured funding for other health organisations working in Jonglei until next month, so the situation in the region may quickly deteriorate even further.”

The fall in funding in Jonglei reflects a general trend across South Sudan, which has left many people without access to essential healthcare.

MSF is calling on international donors to ensure funding continues for other health organisations working in Jonglei state, so that they can provide healthcare and urgent humanitarian assistance, including food, water and latrines, to people living in hard-to-reach areas like Riang. 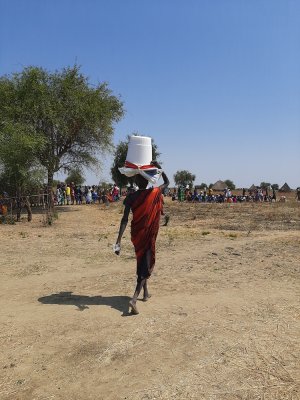 Surrounded by swamplands, these rural communities face months of floods during wet seasons and widespread violence, aggravated by the scarcity of resources, such as food and livestock, during dry seasons.

People living in these villages have to walk more than an hour to reach the nearest free-of-charge healthcare, crossing swamps while carrying patients in baskets or on plastic sheets.

During the rainy season, water levels are so high that only those able to swim can cross the swamps to see a doctor

Meanwhile, those in need of specialised treatment must be carried to the MSF facility in Lankien, a journey of several days and nights walking.

Holding a long stick to support her steps, 47-year-old Nyadeng Wal walked alongside with her teenager granddaughter to reach the emergency team’s mobile clinic. The girl carried her unconscious two-year-old brother in a basket on her head. 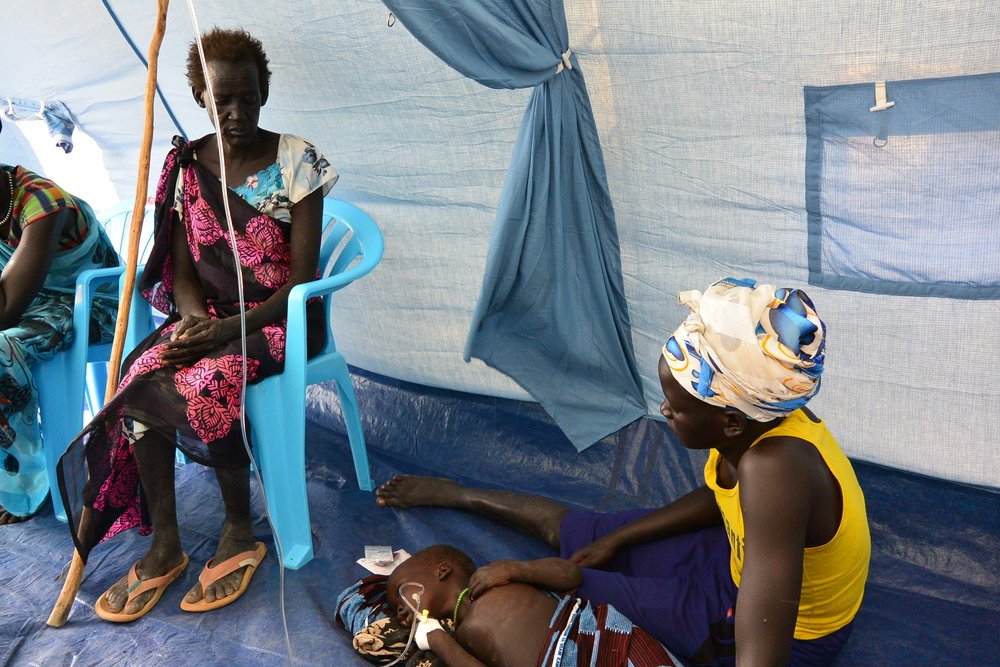 Damaris Giuliana/MSF
Nyadeng's teenage granddaughter carried her unconscious two year old brother in a basket on her head to reach the clinic in Riang.

“We crossed the swamp during the night to take him to a clinic in Pathai. They gave him medication, but he did not improve,” said Nyadeng. MSF’s medical team diagnosed him with severe malaria. Following a recommendation, the family walked to the MSF facility in Pieri where he was admitted for treatment.

Elizabeth Nyechot Koeng also took her seven-year-old daughter, Nyepay Riek Puor, to the MSF mobile clinic in Riang. The girl has had a large open wound on the side of her head since last September.

“Our house in [the village of] Pieth was flooded with around half a metre of water. It rained so heavily thatnight that the wall collapsed and struck her head,” said Elizabeth. 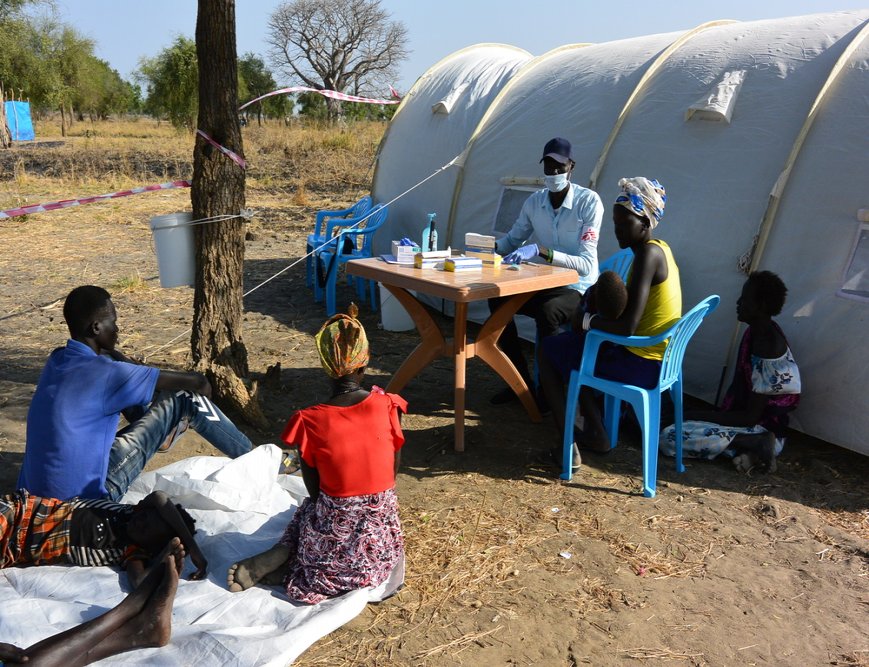 “The whole family had to flee. My husband left with our children and his mother to seek a safer place. Nyepay was bleeding, so I crossed the swamp with a family member to take her to Pulchol. We spent three days in a clinic and then came back to Riang to search for our family.”

They went several more times to a private clinic in Pathai, where follow-up was available, but the family did not have enough money to finish her treatment.

Protracted flooding, ongoing violence in the region and lack of free healthcare facilities have severely reduced access to healthcare 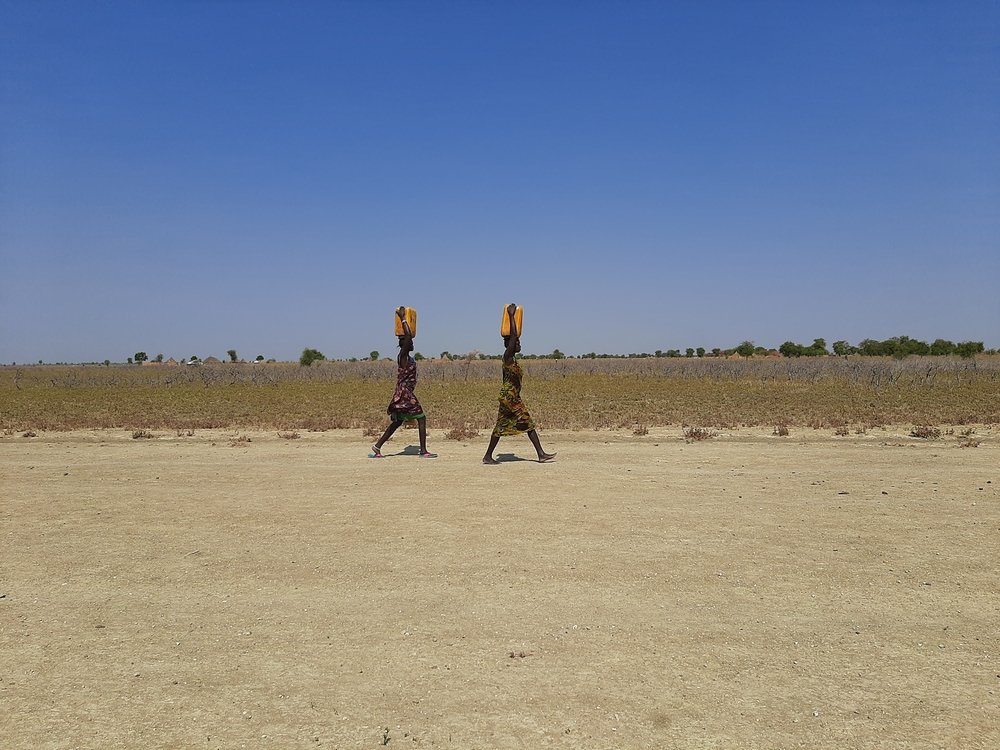 “The gut-wrenching experience of Nyepay and her family represents the situation across many parts of South Sudan. There is one emergency after another".

"The protracted flooding, ongoing violence in the region and lack of free healthcare facilities have severely reduced access to healthcare, and mean many wounds are not properly treated. Those that do manage to get some treatment often have little follow-up or time to heal,” said Wright.