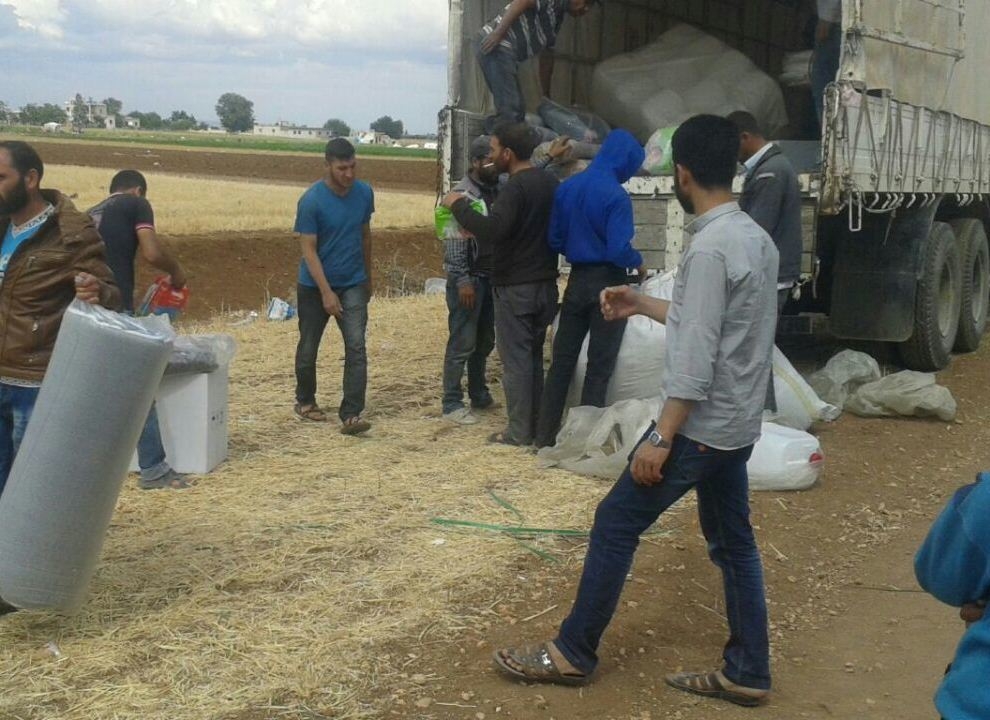 An estimated 100,000 people trapped in Azaz district between the frontline with Islamic State and the Turkish border must be allowed to reach safe haven in Turkey.

Europe must also honour its moral and legal commitments by granting asylum to those fleeing from this conflict, said the medical humanitarian organisation Médecins Sans Frontières (MSF) today.

Today, with fighting a few kilometres away, people are in imminent danger of being engulfed by combat and falling under Islamic State control.

“We are trying to cope and forget that we have lost our homes, but the reality is that we are trapped in an isolated land, with nowhere to go”, said Yahia Jarrad, nurse supervisor in MSF’s Al Salamah hospital in Azaz district.

Thousands of people are already encircled by Islamic State in Mare’a town.

MSF
MSF teams carry out distributions of emergency relief items to displaced people in Azaz district, northern Syria, following an offensive by IS which also forced MSF to close its Al Salamah hospital as frontlines came too close.

“But, today the people of Azaz can only count on them. We ask Turkey to show this generosity once again and open its border to those trapped in Azaz”.

The EU's decision to close its doors to Syrian refugees is not only an abdication of its responsibility to assist, it is also discouraging Turkey from receiving new refugees.

“Instead of fixating on how to stop refugees from reaching Europe, the EU must work with Turkey to speed up the process of granting asylum to Syrian refugees in Europe, starting with those from Azaz” continued Marco.

MSF
MSF teams carry out distributions of emergency relief items to displaced people in Azaz district, northern Syria, following an offensive by IS which also forced MSF to close its Al Salamah hospital as frontlines came too close.

The trapped civilians are cornered in barely 25 square kilometres, on one side they face a precarious frontline with Islamic State, less than 5 kilometres away. On the other, they are met with the Kurdish-controlled Afrin district and the border with Turkey which is closed except for medical emergencies.

“After countless displacements from military offensives, there is no place left for these people to escape to” continued Marco.

“These families, children, elderly people have either held on to their desire to remain in Syria, or have had to stay in the country as they lack the means to leave, but now their lives are at risk and the world must honour their right to flee.”

“We are trapped in an isolated land, with nowhere to go”, nurse supervisor in #MSF ´s Al Salamah hospital #Azaz #Syria

MSF and other organisations have been supporting the people of Azaz who have been living in desperate conditions over the last months. They have seen markets and hospitals bombed and entire villages fleeing from combats.

Most MSF staff have become displaced themselves, joining tens of thousands of others crowded in overwhelmed camps, or in informal settlements without basic services.

Last Friday MSF had to evacuate the patients of Al Salamah hospital and close the facility as frontlines drew too close. MSF teams are still stabilising and referring patients to other facilities and distributing relief items to those fleeing.