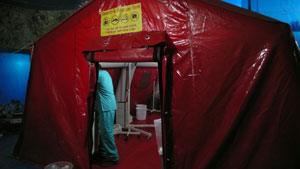 MSF surgeon Paul McMaster is just back from Syria where he treated the wounded in an operating theatre set up in a cave and then a farm. Experienced in working in war zones, in Syria he found a ‘more oppressive type of danger’.

I flew into Turkey, and then we went up to the low mountains near the border, where we were picked up by a guide who took us through the forests and hills and into Syria.

Médecins Sans Frontières/Doctors Without Borders (MSF) has four surgical teams working in the conflict zone in the northwest of Syria. Our team was working in a cave. We went in through a very small entrance. Inside, there was an inflatable operating tent and six emergency beds.

We were staying 15 minutes away in a very small village. Most of us were sleeping on the floor in the basement room of the mosque. The villagers were happy for us to be there. Every day a lady in the village cooked a whole lot of flat bread, so we lived on that, and beans.

Quite a lot of the population had left the area for refugee camps on the other side of the border with Turkey. But there are still significant numbers of older people, women and children remaining, and these are the areas that are being rocketed and bombed from helicopters.

The helicopters travel around slowly and hover over towns before dropping large bombs, and these things cascade down and cause an enormous blast and destroy buildings. The bombing of the towns and villages was happening every day.

When they explode in the mountains, the bombs create enormous explosions of sound which reverberate through the hills and are clearly very frightening for people. On our last morning in the cave, several landed within a couple of hundred metres of us, shaking the cave and bringing down dust. You didn’t quite know whether you were better off outside or inside. It’s very unsettling for everybody, especially for wounded patients and children.

In our team there was a surgeon, an anaesthetist, an emergency nurse, two doctors, a Syrian nurse in her early 30s, who was just inspirational – never tired, always organised, always smiling – and about 11 young women from the villages who we were slowly training to do basic nursing.

One night we were called in and there were two distraught women with three screaming babies. Their house had been literally demolished by a bomb, and these children had shrapnel wounds to their faces – the wounds were not life threatening, but they were in great distress and anguish.

Another night a man in his late 30s was brought in by a very excitable crowd of fighters. He’d been shot through his chest, we had very limited blood supplies, and his condition was so unstable that I doubted he’d make it through the night. But he pulled through, and the determination he showed was quite remarkable.

I remember another man who came in with severe shrapnel wounds to his leg. The blast had gone through his leg and damaged the main nerve, but not the main blood vessel. He had lost two or three of his family in the blast. We operated on him, but afterwards he lost all motivation to get better – he’d lost his home, he’d lost many of his family, and he faced a potentially crippling injury. It’s really very difficult for people.

Over the last five or six weeks, we did about 100 operations and treated many more casualties. We also saw diabetics who had run out of medication, children with asthma, women who needed caesarean sections.

No access to healthcare
These people have had no access to effective healthcare for over a year. Some people might be able to make it over the mountains to Turkey to get treatment, but for many that’s just not an option.

When you’re faced with casualties, the surgery is fairly straightforward. You do what’s called damage limitation surgery to stop haemorrhages and deal with damaged internal organs. The difficulty came when we moved to the reconstructive phase – things like physiotherapy and rehabilitation and more complex orthopaedics – this was work we just couldn’t do in the cave.

You can get overwhelmed. When it became fairly clear that medically we were struggling to cope with the patients in the cave, we closed it and transferred our patients and the team to a new location. It was a farm – so not a great upgrade.

It wasn't perfect, it still looked a bit like a farm, but it created much more space to treat casualties.

We moved half the patients on Thursday and the rest on Friday, and by Saturday we were operating in the new location.

I've worked in many difficult places with MSF – war zones like Sri Lanka, Ivory Coast and Somalia – but while in those countries it was dangerous on the ground, in Syria the danger always comes from the air. It’s a much more oppressive type of danger, having a helicopter hovering in the sky above you.

Many of the towns are like ghost towns, with the buildings blasted or destroyed. There’s a hopeless, desperate air about the place. Most people are living in cellars. They’ve had no electricity for eight or nine months.

It’s very bleak indeed and winter is beginning now. I think people are really going to struggle, and the most vulnerable will struggle most. For the civilian population, trying to light little fires in their basements, it’s going to be a very long, hard, cold, dangerous winter.