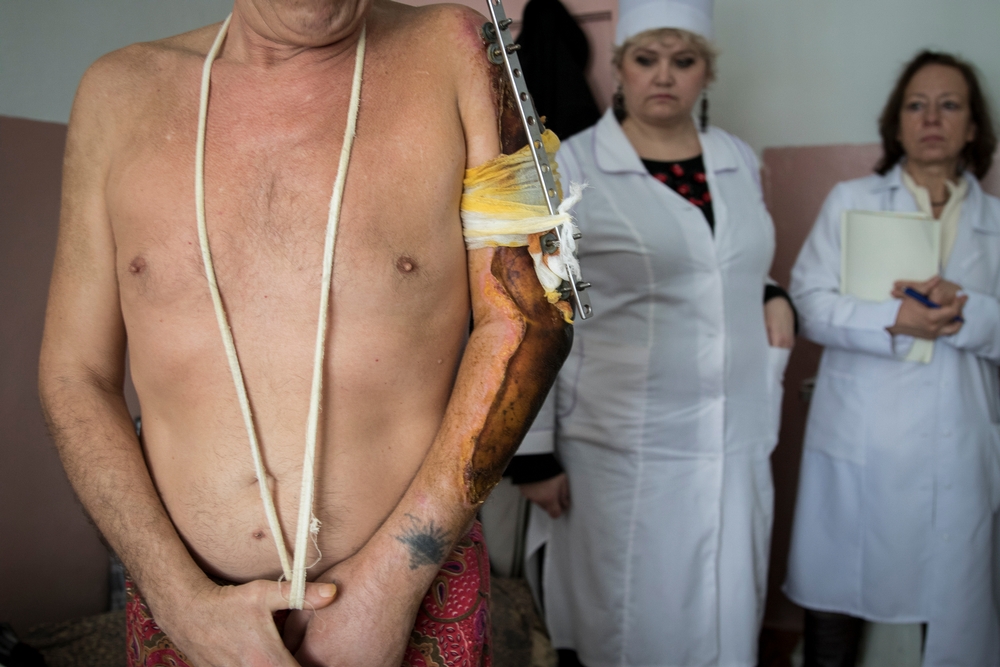 Ukraine: Hospitals shelled and civilians cut off as fighting intensifies

As fighting escalates in eastern Ukraine to a level not seen since August, the situation for civilians caught in the conflict zone is now dire.

With doctors working in hospitals close to the frontline struggling to treat the wounded with dwindling supplies, Médecins Sans Frontières/Doctors Without Borders (MSF) teams are stepping up their support, but continued heavy fighting is preventing them from reaching the hardest hit areas.

“Medical workers have been under intense strain for months on end dealing with thousands of wounded and displaced people,” says Loïc Jaeger, Deputy Head of Mission for MSF in Ukraine.

“The intensification in fighting has only exacerbated the already acute shortage of essential medicines such as antibiotics, pain killers and suture materials.

“Doctors and nurses working in frontline hospitals are now stretched to breaking point.”

Directors of hospitals in Donetsk, Stakhanov, Pervomaisk and Novoaidar, which MSF has been supporting with medical supplies since the beginning of the conflict, have reported an increase in the number of wounded civilians being admitted since heavy clashes restarted on 13th January.

Since then, our teams have been replenishing supplies for these and seven other hospitals on both sides of the frontline to ensure doctors have enough to treat up to 500 wounded patients.

Joffrey Monnier/MSF
This pregnant woman will soon deliver her fourth baby. She is living in the conflict zone but decided to cross the frontline in advance to deliver more safely.

Throughout the conflict, health facilities have not been spared from the fighting and in the last week alone three medical facilities in Donetsk and Luhansk have been hit by shells or rockets.

On 19th January, Donetsk’s Hospital #3 was hit by a rocket, despite being located in the centre of the city, at least seven kilometres from the frontline.

“Shelling of medical facilities, whether indiscriminate or targeted, is absolutely unacceptable,” says Jaeger.

“When health facilities are damaged or destroyed, not only will wounded people not receive treatment today, but pregnant women, sick children and people with illnesses like diabetes, heart disease and hypertension, won’t be treated tomorrow.

“All parties to the conflict must ensure that hospitals are spared and staff can carry out their work without fearing for their lives.”

On 14th January, a hospice for mentally disabled people in Slavyanoserbsk, Luhansk region, which MSF has supported with medicines and hygiene materials, was severely damaged as the city came under heavy shelling.

The MSF team was able to reach the city’s main hospital on 19th January to deliver enough supplies to treat up to 50 wounded patients.

The hospital was without electricity for two days due to shelling and the MSF team saw at least 10 recently destroyed houses in the centre of Slavyanoserbsk city.

“Getting in and out of the conflict zone is becoming more and more difficult, both for civilians and MSF teams trying to provide assistance,” says Jaeger.

“On Monday and Tuesday, our team tried to deliver urgently needed medical supplies to a hospital in the frontline city of Gorlovka in Donetsk, but the trucks were turned back at checkpoints.

“We still have not been able to deliver the supplies. With the situation for civilians rapidly deteriorating, it is critical that all sides allow humanitarian aid to reach those who desperately need it.”

Since November, a series of measures taken by the Ukrainian government have effectively cut off civilians living in rebel-controlled areas and made it increasingly difficult to provide humanitarian aid.

All support to public and social services, including pension payments, medical supplies and salaries for public service workers, including health staff, have been withdrawn.

Banks have been ordered to close accounts in these areas and all banking services, including ATMs and credit card payments, are blocked. People are forced to travel to towns on the other side of the frontline to try to withdraw funds or access their pensions.

This will become even more difficult following a new measure, which came into effect on 21st January, requiring anyone wanting to cross in or out of rebel-controlled areas to hold a special pass.

Additionally, since 19th January, movement in and out of Luhansk has been severely restricted due to ongoing fighting and damage to the roads.

Joffrey Monnier/MSF
Civilian wounded by a shrapnel in Donestk area is treated at the hospital of Selidivo.

Since the beginning of the conflict in eastern Ukraine, MSF teams have been supporting medical facilities in Donetsk and Luhansk regions with medical supplies, as well as running psychological support activities.

Since May, our teams have supplied 70 medical facilities on both sides of the frontline, enough to treat more than 13,500 wounded patients. In response to the difficulties people now face accessing basic healthcare we are now supporting primary health centres and maternities in conflict-affected areas.

MSF psychologists are providing mental health support to those affected by the conflict in several cities, including individual and group consultations.

Find out more about MSF’s work in Ukraine