April 15th, 2022- Since the beginning of the war in Ukraine, Kharkiv, the second largest city in the country, has been severely affected by the Russian offensive. While many fled the city, those who stayed have taken refuge in underground stations to escape the incessant bombing. Médecins Sans Frontières (MSF) teams offer primary healthcare consultations in several stations. 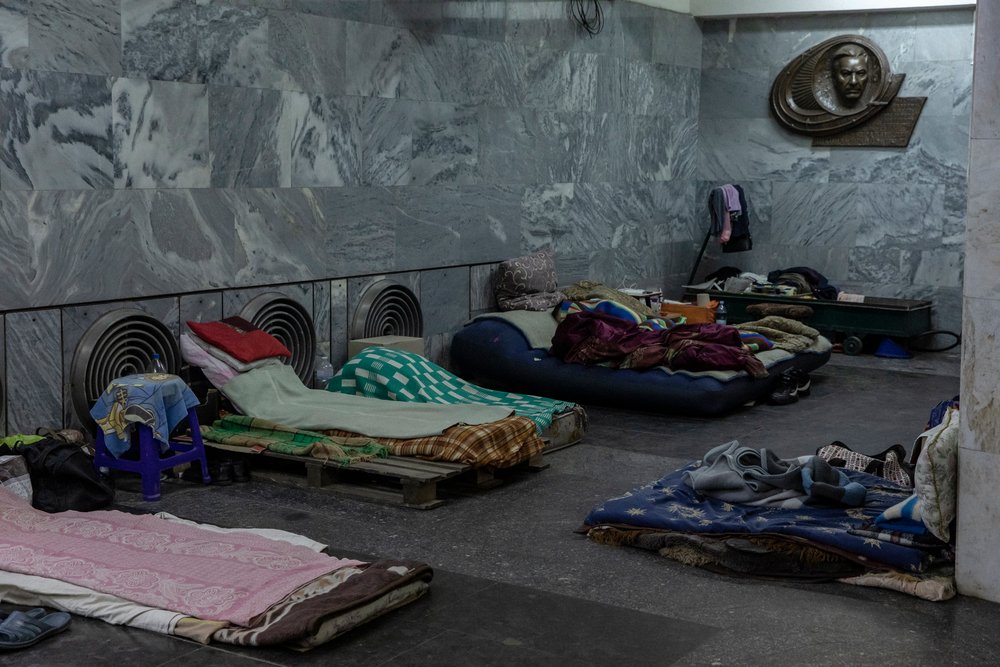 Kharkiv had a population of 1.8 million before the war. It has partially emptied over the past few weeks. “The city now looks rather deserted. There are few people in the streets and most stores are closed,” says Michel-Olivier Lacharité, MSF head of mission in Ukraine. 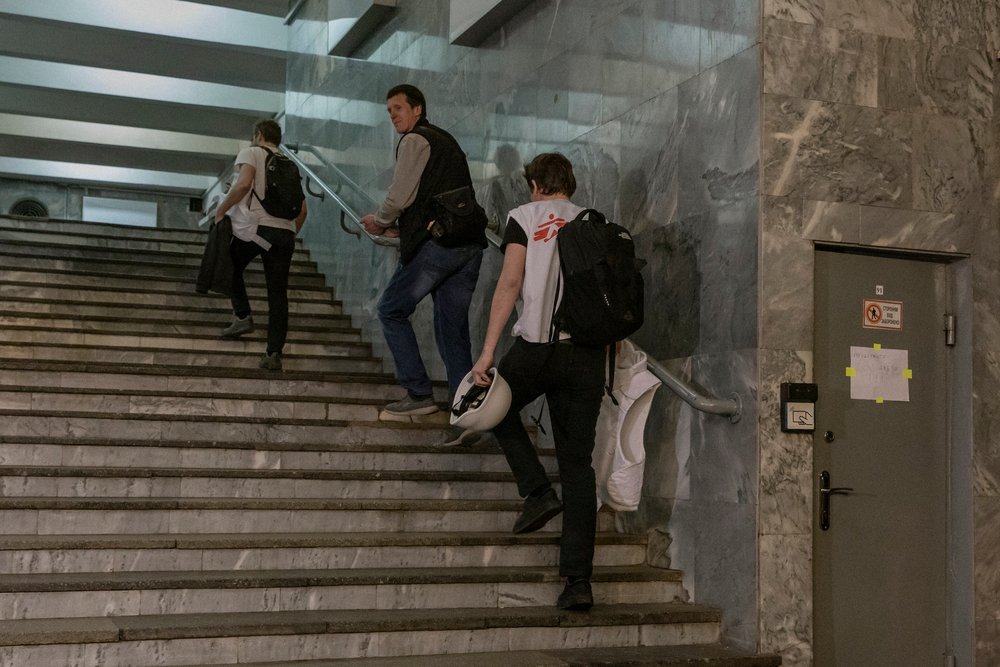 Adrienne Surprenant/MYOP
MSF staff walks in one of the metro stations, where 200 people now live to hide from the bombs, in Kharkiv, Ukraine, on April 11, 2022.

“There are still a few pharmacies and markets open so that people can find food, but the main market in Kharkiv is closed."

Since the conflict began, the bombing has been continuous, particularly in the northern part of the city. "Bombing still happens all day long, along a seemingly random pattern." 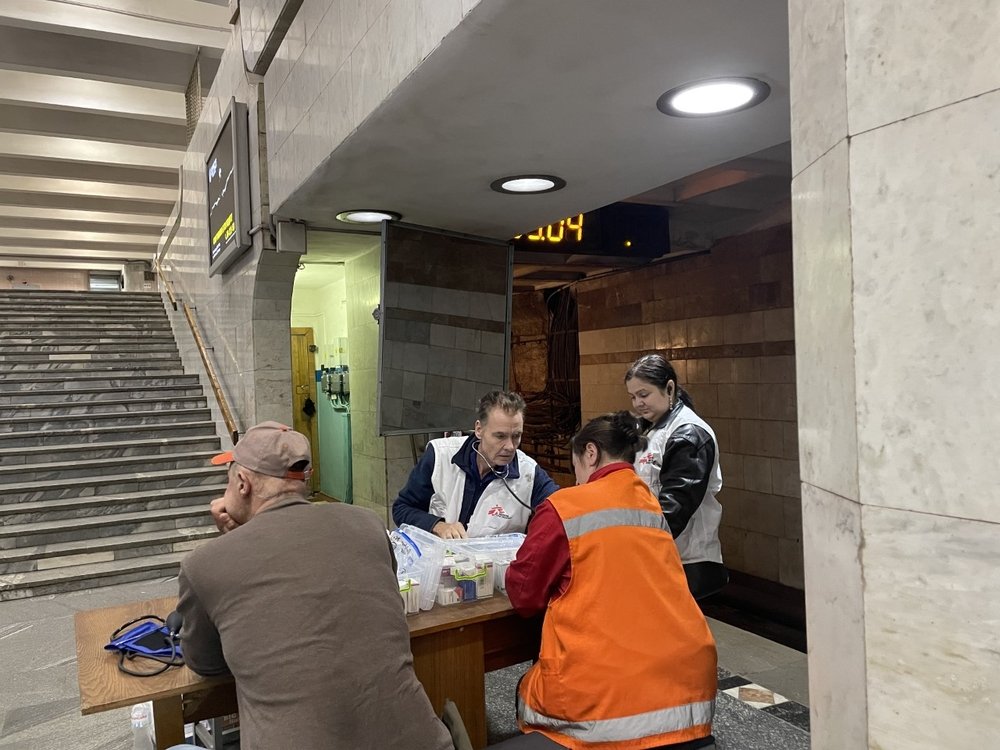 "Sirens warn people when it happens. There is also a warning system on smartphones. These bells ring several times a day. It is quite anxiety-inducing," Lacharité says.

For the 350,000 people who, according to local authorities, stayed in the city, the underground stations are the safest place.

In the cold and humidity, sleeping in tents

"There are three lines in the city of Kharkiv,” says Lacharité, “and most, if not all of the stations are in use." Each station hosts about 100 people during the day, a number that can easily double or triple at night. 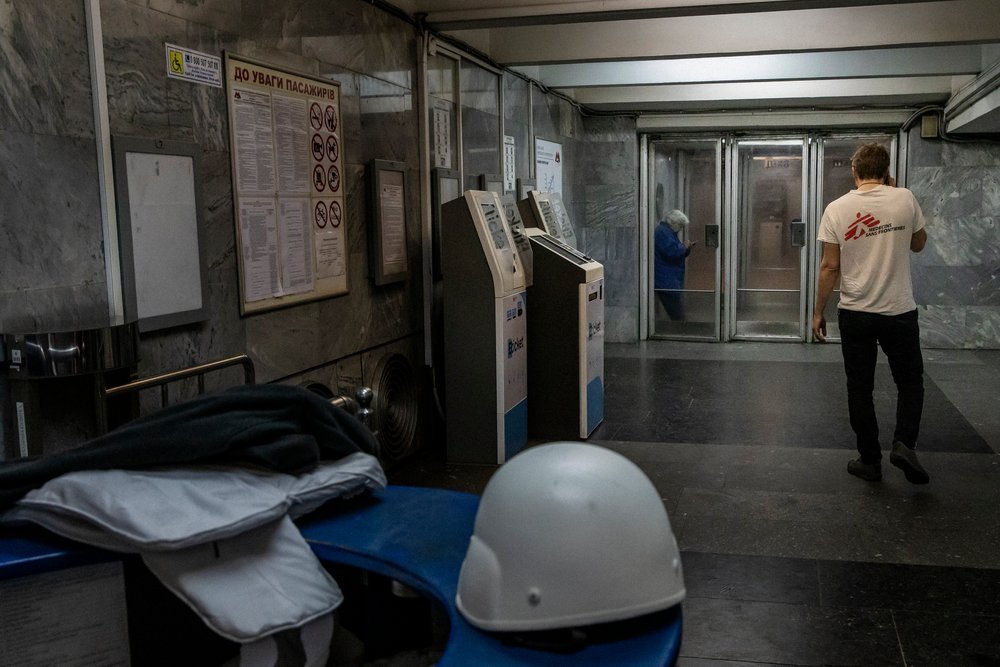 Adrienne Surprenant/MYOP
An MSF staff is on the phone in a metro station serving as shelter, in Kharkiv, Ukraine. (April, 2022).

"Most of the people who live in the underground are elderly or vulnerable. They have been there for more than 40 days in the cold and humidity, sleeping in tents.”

MSF has set up mobile health clinics in several stations on the three Kharkiv underground lines. Some consultations take place at night. 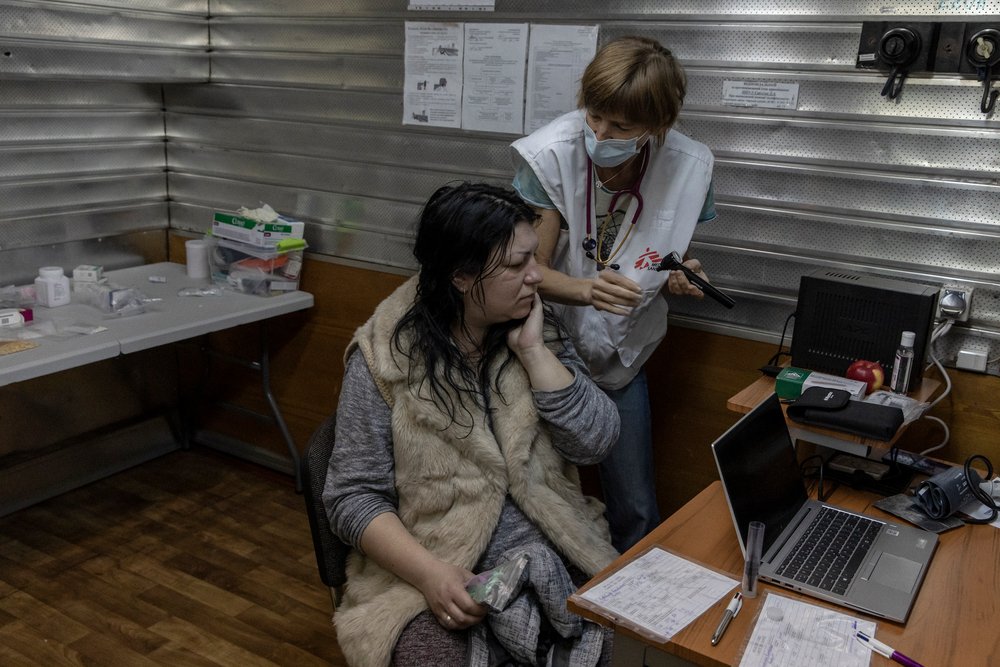 Adrienne Surprenant/MYOP
Elena, 35-years-old is examined by MSF doctor Kelly, for an ear infection that hurts her throat, in Kharkiv, Ukraine. (April, 2022).

Despite the curfew in the city, the teams can move from station to station through the tunnels. More than 510 medical consultations have already taken place since the beginning of the activities, mainly for respiratory tract infections and hypertension, consequences of the living conditions in the underground system but also of the stress.

"Even in the underground, you can hear the vibrations from the bombing on the surface," says Lacharité"

Nina, 83, was only a baby during the Second World War. “I am too afraid to leave my city, I have never been abroad. I love Kharkiv too much!” she says with a sad smile. “Its parks, its squares. But the bombs are likely to destroy everything. I am afraid that there will be nothing left but ruins.” 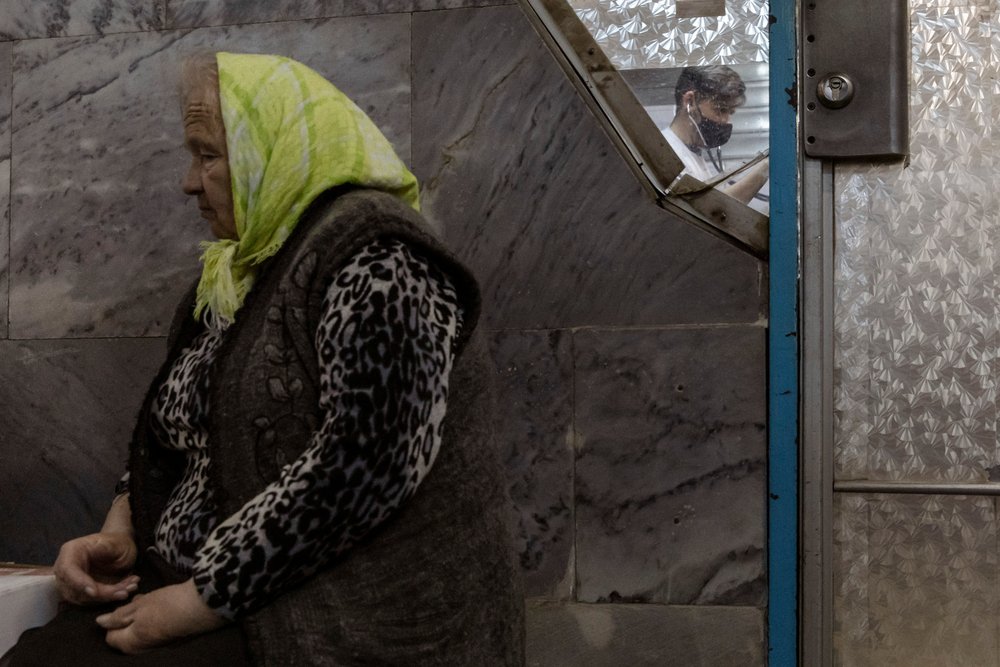 In addition to medical consultations, MSF also offers mental health support. For the young children and adolescents now living in the underground system, the most common stressor is the fear of going out in the open.

"The potential for anxiety-induced behaviour increases as war and instability continue and insecurity becomes a permanent feature of life. Nonetheless, the children here are coping quite well with the extreme situation for now," says Devash Naidoo, MSF mental health activities manager. 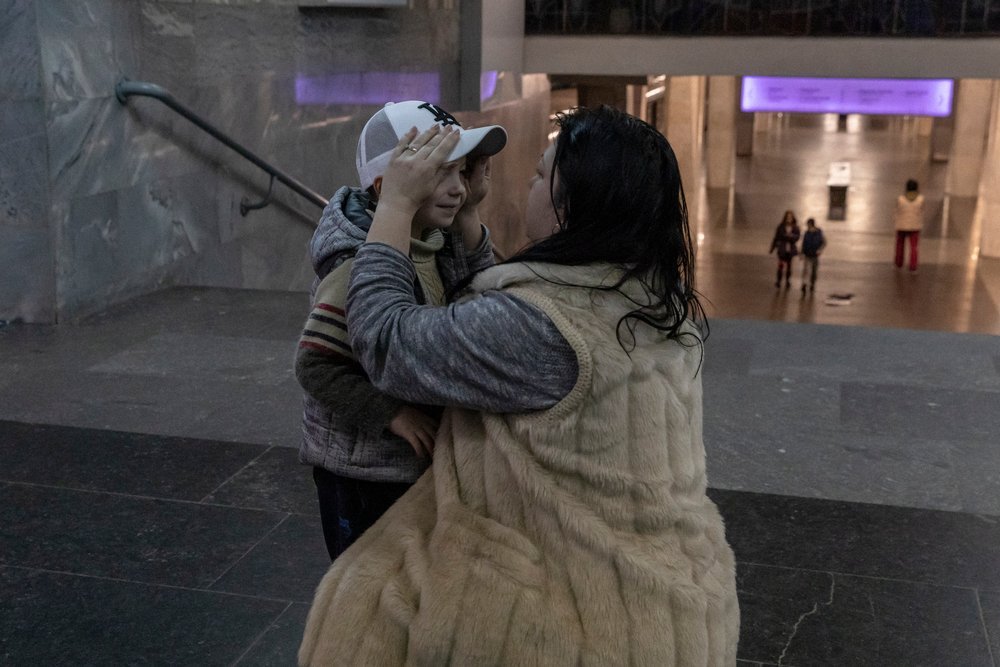 MSF teams are also distributing much-needed supplies for everyday life: microwave ovens to heat up the food, detergents for cleaning, and water filters to provide drinking water at night.

Sanitary situation is not ideal

"There are tents and makeshift beds set up all over the place, which means that the sanitary situation in these stations is not always ideal," says MSF doctor Guillaume Mongeau. 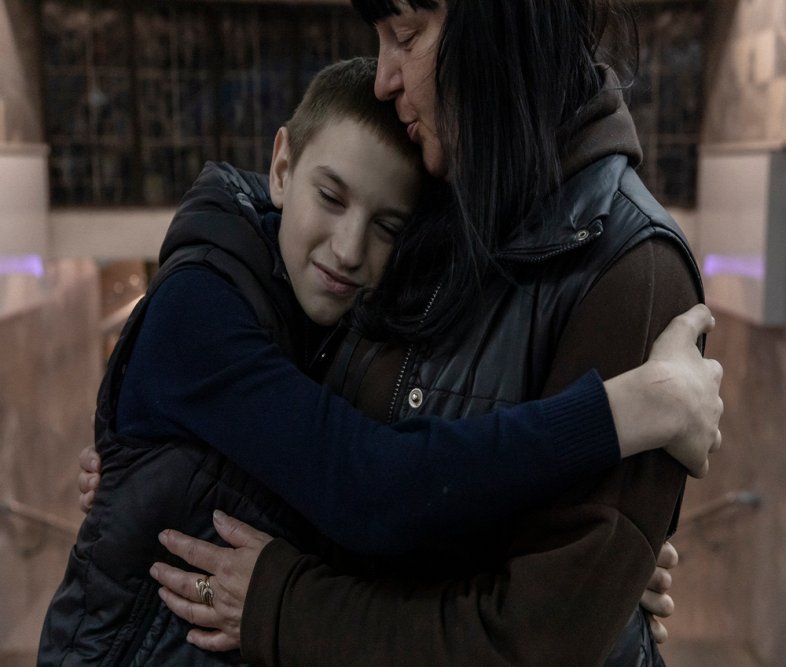 Despite the living conditions, for many staying in the underground is the only option. "The cold, the lack of sleep, all this is nothing compared to the war. At least here we are safe," says Ludmilla, 40.She stayed home with her family as long as possible, until an explosion happened near their house. "I was very afraid for my son when I saw him clutching our cat tightly to his chest while he said, 'Mom, I don't want to die.’”