"We lost what little we had": One of the thousands of people affected by flooding in northern Honduras

Since the end of September, the Doctors Without Borders/Médecins Sans Frontières (MSF) team in Choloma have been working with emergency intervention shelters, caring for people affected by the overflowing of two rivers in the department of Cortés.

As if history were rewriting itself, two years after hurricanes Eta and Iota, evacuation alarms are sounding again in northern Honduras. The Chamelecón and Ulúa rivers are overflowing and those living nearby who have only just finished recovering their homes after the previous disaster, must flee from them again. Hundreds of families are now living in temporary shelters, adapting to their new circumstances.

This has again been repeated in October this year, during the current rainy and cyclone season, aggravated by the passage of tropical storm Julia with many rivers exceeding their limits, leaving villages, roads and crops under water. In response to this emergency, the Honduran government, through the Permanent Contingency Committee (COPECO), set up more than 95 shelters in three departments to provide space for more than 8,900 people. In the department of Cortés, in the north of the country, 47 shelters have been set up accommodating more than 2,300 people.

MSF
As part of a series of response activities carried out by the MSF team in Choloma, hygiene kits were delivered to people in shelters following the floods of recent weeks.

"I remember when I was ten years old, I was also taken out of the house by boat because my house was filled with water after the hurricanes. Sometimes I feel sad here in the shelter, but my mom tells me to go play with the other kids. I would like to be at home, I don't like it here, even though sometimes I play, I want to go home. I don't know how the house is, dad went to see it, but he says there is still a lot of water and who knows if there is nothing left", says Crisli, a minor who was installed with his family in a shelter in the municipality of El Progreso, department of Yoro.

The needs are urgent in the shelters. There is not enough food, drinking water and sanitation conditions are precarious. These conditions exacerbate physical and mental health problems in the affected people. Since the end of September, the MSF team in Choloma began an emergency intervention working with several shelters in the area. MSF deliver hygiene and hydration kits, assist people by providing information on self-care, mental health support and work on the detection and prevention of cases of violence and sexual violence.

"We are helping in shelters, emphasizing proper hand washing to avoid the spread of diseases and in the prevention of sexual violence. We have identified situations of violence, especially against girls and boys. In one room, for example, there are five families and each one may have three to four children. In this context, there is greater vulnerability to cases of violence," says Karen Zambrana, MSF community activities manager in Choloma.

For Maritza, Crisli's mother, "this situation has been very difficult. We lost absolutely everything in Hurricanes Eta and Iota. It has been extremely difficult for us to recover, and now with these rains we have lost the little we had, including my chickens. Once again, they are taking us out by boat because where we live the water covers the roofs of the houses. Being in these shelters is not easy for anyone. Many times, you can't even sleep because there are several of us in the same room. It is difficult, but there is no other way. 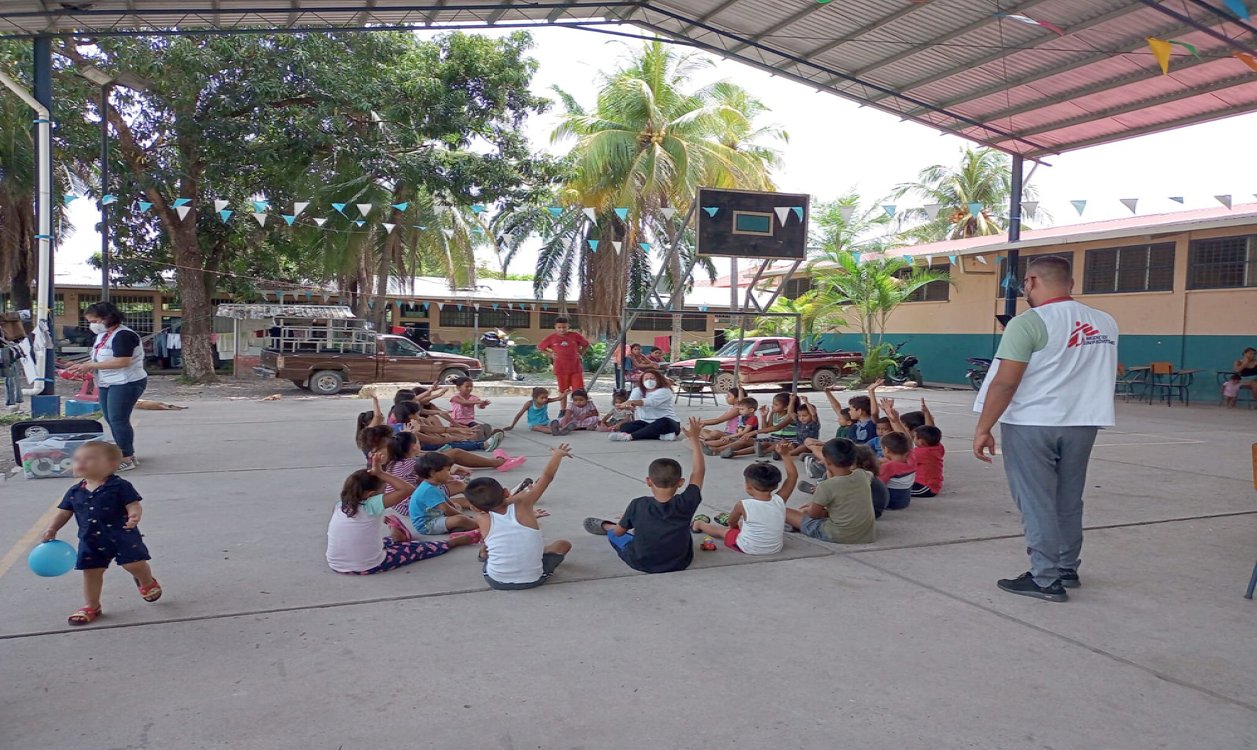 As part of the violence prevention activities, the teams have identified that girls and boys outside and inside the shelters have been violated. "The community team also works with figures so that children can identify areas of their bodies that they cannot touch. When we explained this to them, many were surprised, and some even identified and admitted that they were constantly abused," says Zambrana.

The mental health team also works on tools for adults to help them manage stress and resolve conflicts. Through psychoeducation, they focus on helping them normalize their symptoms and work on strengthening their coping mechanisms. With the children, they focus on group activities so that they can also express their emotions.

It is important that the Honduran government strengthen mental health services in these shelters. In view of this, MSF calls for the implementation of a national policy that includes trained personnel to ensure psychological care during and after these emergencies of natural origin that generate psychological and emotional effects on people. In addition, monitoring should be carried out to prevent potential cases of violence that the population may experience in these instances.