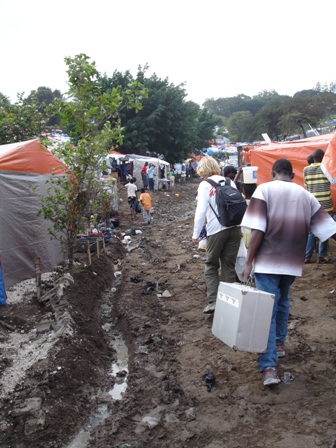 'We're keeping our heads above water'

As the people of Haiti face a massive cholera epidemic, MSF calls for the emergency response to be urgently scaled-up. Dublin native and MSF Field Coordinator Danielle Ferris, describes the situation in Martissant, one of the biggest slums in Port au Prince.

We’re keeping our heads above water here, but the situation is pretty bad and people here are very scared. It’s fear of the unknown as Haitians have not dealt with cholera in living memory. Our MSF project is an emergency health centre for the people of Martissant, a busy slum area in Port au Prince with a population of 400,000 people living in houses, huts and tents. Since 22nd October we have also set up a cholera stabilisation centre here in addition to our usual emergency, adult, child and maternity services.

At first we didn’t have so many cholera patients, just one or two severe cases a day. But the situation is definitely getting worse since. Two days ago we had 50 cholera cases at the Martissant centre; yesterday we had 63 cases. Some people come in very early which is fantastic because we can treat them with oral rehydration solutions and sometimes even release them within the same day. But others spend a day or more at home firstly and are very sick by the time they come in for treatment.

Minutes can make a huge difference in cholera treatment. We had one little girl who was about two years old. Her family had travelled in the Artibonite region where the outbreak first occurred and she was very ill when she came in. I’d seen cholera centres before in Congo, but no cases like this. She was lifeless, her eyes were rolling back in her head and she was extremely dehydrated. We treated her by intravenous drip and about four hours later she was so much better -alert and moving around. Which just shows how treatable cholera is if you get there quickly enough. Our teams involved in triage and treatment are excellent; some have had experience working in Petit Riviere in Artibonite and so can identify who in triage needs to be treated first.

There are a lot of rumours going around about how cholera is spread and how it’s treated, and dealing with these rumours is the real challenge. We are working with partner NGOs in Martissant to educate and sensitise the population on cholera – explaining about basic hygiene measures and not to drink untreated water. There are teams of people going around spraying camps depending on where our patients are coming from. In the stabilisation centre we have footbaths, hand washing, and sprayers with chlorinated water for the people coming in and out of the treatment centre. All stabilisation centre staff have specific clothing to wear that they put on when they get to work and then take off before they leave. All these clothes are then washed on-site.

But in the slum a lot of people don’t have access to clean water or toilets. There are water points but some people just can’t afford the charges, or have other priorities - they want to get their children to school or clothe or feed them - so if they see a broken pipe with what looks like clean water, they use it. In the same spot you’ll see people washing there and then, or cleaning their motorbike, or collecting water to take home for cooking and drinking. This is all untreated water that may or may not be infected.

As the situation is getting worse, I would appeal to people not to forget about Haiti. This cholera epidemic comes on top of consequences of the earthquake where people have no homes, no jobs, and no money. People here still need help. We’re very concerned that with the increased number of cases, that there will not be enough spaces for all of the people who come to us.

MSF teams have treated more than 11,000 people across the country since the outbreak began in late October.  In Port-au-Prince, MSF has been seeing the number of cases doubling each day since Saturday, November 6th.  Even with 400 Haitian and 170 international staff focusing exclusively on the outbreak, MSF alone cannot cover all the needs in this cholera epidemic and it is imperative that other organizations step up

Additionally, MSF is providing approximately 280,000 liters of water per day in Cite Soleil, supplying enough drinking water for approximately 14,000 people, but still much less than the neighborhood needs. MSF cargo planes arrived in Haiti on Sunday and Monday to bolster supplies.