Renewed, full-blown conflict across much of the Central African Republic (CAR) produced scenes of extreme violence in 2018, directed at people still suffering the trauma of the civil war that tore the country apart.

Despite the peace agreement signed by the government and armed groups in the Central African Republic (CAR) in February, violence has continued unabated in many parts of the country. 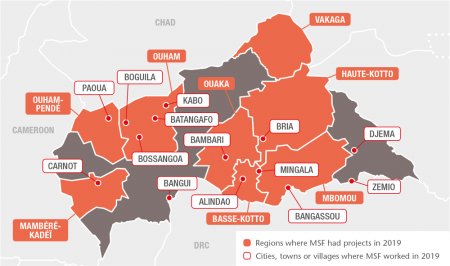 Although there have been fewer large-scale attacks on civilians, thousands of people are still living in constant fear, exposed to beatings, rape and murder, with no access to healthcare or other basic services. By the end of 2019, over 687,000 people were internally displaced, while the number of refugees from CAR in neighbouring countries had risen to 592,000.

The pervasive insecurity repeatedly hampered the ability of Médecins Sans Frontières (MSF) to deliver medical care and respond to the urgent needs of vulnerable people. Nevertheless, we continued to run 12 projects for local and displaced communities in six prefectures and the capital, Bangui, providing general and emergency care, trauma surgery, maternal and paediatric services, assistance to victims of sexual violence and treatment for malaria, HIV and tuberculosis (TB).

In addition, we launched a number of emergency interventions during the year and maintained our assistance to Central African refugees living in Ndu, Democratic Republic of Congo, across the River Mbomou from CAR’s Bangassou.

Access to medical care, food, water and shelter was severely restricted by the conflict, and our ability to respond was repeatedly hampered by insecurity and attacks on our facilities. Nevertheless, we continued to run projects for local and displaced communities in eight provinces and in the capital, Bangui, providing primary and emergency care, maternal and paediatric services, trauma surgery and treatment for malaria, HIV and tuberculosis (TB).

Malaria remains the main killer of children under five in CAR, and its effects are often exacerbated by the precarious conditions in which they live, exposed to malnutrition, infections, measles and other preventable diseases. Insecurity, drug stockouts, long distances to health facilities and transport costs are some of the barriers restricting access to effective and timely medical care for children. 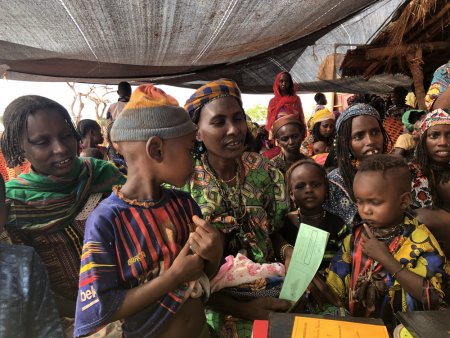 Victor Manjon/MSF
Mothers and children in Mingala, an area that is difficult to access due to insecurity and bad road conditions, during a two-day MSF vaccination programme. Central African Republic, March 2019.

Our teams intervene at all levels to address these challenges in all our projects outside Bangui. Strategies to deliver care nearer to people’s homes included supporting community health workers to test and treat patients with simple forms of malaria and diarrhoea cases in their villages in Bambari, and deploying teams to hard-to-reach areas and displacement sites, such as PK3 camp in Bria and the Catholic parish in Bangassou.

In 2019, our teams assisted more than 50,000 displaced people as well as local communities in remote locations, such as Nzako in Mbomou prefecture, where the inhabitants have been trapped by three years of relentless violence. MSF supplied health centres with medicines and equipment, staff and technical training and supported hospital emergency rooms and paediatric wards, enabling the most severely ill children to obtain free specialist

care. In total, 31,300 children were admitted to MSF-supported hospitals in 2019. Prevention is essential to saving lives, which is why our efforts were also directed towards supporting routine vaccination and mass vaccination campaigns. During the year, our teams carried out vaccinations against diphtheria, tetanus, hepatitis B, whooping cough, polio and measles for children in Vakaga prefecture and set up two multiantigen vaccination campaigns in Pombolo, Ouango district. 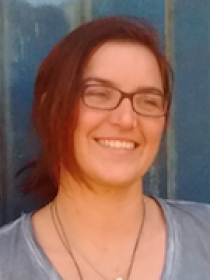 The Invisible World of Supply >

Trauma surgery and comprehensive support to victims of sexual violence

MSF is the main organisation delivering medical and psychosocial care for victims of sexual violence in CAR, and we have progressively integrated it into our programmes across the country. In Bangui, 3,230 victims of sexual violence received medical and psychological assistance in the outpatient department of SICA hospital, a surgical trauma facility we built in 2017.

The hospital has 80 beds, an emergency room and two operating theatres, and offers comprehensive treatment, including post-operative care and physiotherapy. Of the 9,810 trauma patients we treated at the hospital in 2019, 80 per cent were victims of road accidents, and around 20 per cent victims of violence, with bullet or stab wounds. We also launched a new project called Tongolo – meaning ‘star’ in the Sango language – offering comprehensive care for sexual violence, specifically adapted to male, child and adolescent patients, in four of Bangui’s health facilities.

Another focus of our activities in CAR is HIV/AIDS, a leading cause of death among adults, as the country has Central Africa’s highest HIV prevalence. Our teams work to make treatment as accessible as possible in our projects in Carnot, Paoua, Boguila, Kabo, Batangafo and Bossangoa. We started similar activities in Bria, and in October, we launched a new project in Bangui, which aims to reduce sickness and death related to HIV/AIDS and tuberculosis.

Our teams also offer care, treatment and training in the university hospital and support partner health structures. Despite available funding, less than half of the 110,000 people living with HIV in CAR receive care. In 2019, when the country experienced a major stockout of antiretroviral (ARV) medication, we responded by providing emergency supplies to the Ministry of Health and medical facilities, while also maintaining provision to our regular HIV programmes.

For example, in Carnot, where we follow a cohort of 1,850 patients, antiretroviral treatment was initiated for 414 patients, including 27 children. Six hundred and four adult patients were admitted into MSF-supported internal medicine hospital wards in Paoua, mainly due to advanced HIV and tuberculosis. In addition, we worked with the Ministry of Health to set up more community-based patient groups with the aim of mitigating the daily challenges faced by people living with HIV and making it easier for them to adhere to treatment.

For example, group members take it in turns to pick up each other’s ARV medication, thereby reducing the number of times each person has to travel to a health facility. In the Carnot area alone, there are more than 60 patient groups. The groups also function as psychological support systems in which people can speak openly about their HIV status – in Zémio they hold their meetings outside under the mango trees. One group decided to jointly purchase chickens, not only to eat as a source of protein, but also to sell as a source of revenue to enable them to travel to health centres.

Responding to outbreaks of violence and disease Throughout the year, we supported health centres in Alindao and Mingala in BasseKotto, where violence between armed groups continued despite the peace agreement, forcing thousands to flee. Our teams treated thousands of people for malaria and administered vaccines to children and pregnant women. We also conducted nutritional needs assessments and donated medical supplies to facilities in Zémio and Djema