Colombia saw a resurgence of violence in 2019, as armed groups fought over disputed territories. 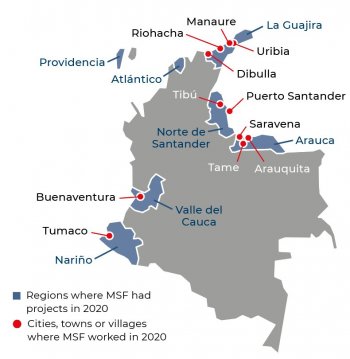 Situated in the northwest of South America, it is bordered by Panama, Venezuela, Brazil, Ecuador and Peru and is the fourth largest country in the region.

It has rich oil reserves and is a major producer of gold, silver, emeralds, platinum and coal.

Our work in the country focuses on providing care for victims of armed conflict and to those excluded from healthcare.

During 2020, MSF expanded activities to meet the challenges of COVID-19 and assist communities caught up in clashes between armed groups vying for territory.

In Nariño department, our emergency response team scaled up their support to local hospitals in the port city of Tumaco, with direct care for symptomatic patients, training in infection prevention and control, the creation of staff and patient flow routes, and donations. Mobile teams were sent to work in rural communities cut off from health services by the constant presence of armed groups.

Even in the city, our teams experienced constant security threats, with shootings between rival gangs restricting our community outreach work and incursions of armed groups into a hospital interrupting our treatment of critically ill COVID-19 patients in the intensive care unit.

In the border areas of Norte de Santander, Arauca and La Guajira, our teams continued providing general and mental healthcare to Venezuelan migrants. Our activities in La Guajira ended in August, and those in Arauca were handed over to Première Urgence Internationale as part of the MSF strategy to assist other organisations to establish their presence in conflict areas of the country.

We also closed our mental health programme in Buenaventura, Valle de Cauca, where since 2015 teams had been offering psychological support to victims of violence. The project’s innovative call centre and psychosocial activities were successfully handed over to the local health authorities.

In June, as part of our COVID-19 response, a mobile team was formed to support small hospitals in Atlántico, a coastal department that was the epicentre of the outbreak at the time. Support included training in infection prevention and control, and mental healthcare for staff.

Towards the end of the year, we carried out an emergency response to a category 5 hurricane which flattened Providencia, a small Caribbean island hundreds of kilometres off the coast. Despite huge logistical challenges, we quickly sent a team to deliver medical and mental health support to the traumatised community.

In the department of Cauca, we offered mental health assistance to the Nasa indigenous community after a massacre in which several of their members were killed. In Chocó, our teams ran general and mental health services for members of the Wounaan Nonam indigenous community displaced by clashes between armed factions in Docordó town centre. In the last week of the year, an MSF team in Norte de Santander provided general and mental healthcare and shelter kits to more than 100 people confined in a school in Hacarí.

Our mobile emergency response team focused exclusively on humanitarian emergencies in the department of Nariño, one of the regions most affected by the renewed conflict and other violent events in the country. We offered medical and mental healthcare to people confined and displaced by clashes between armed groups in the municipalities of Olaya Herrera, Roberto Payán, Magüí Payán and Tumaco, among others. We also donated shelter kits to hundreds of families in temporary settlements.

Yet again, our teams witnessed the effect of displacement and confinement on people’s mental health. Stress, worry and fear add to the psychosocial impacts of exposure to acts of violence. In addition, the absence of timely responses from the authorities intensifies the feeling of lack of protection and uncertainty. In Colombia, we also address the effects on mental health of the threats, targeted killings and intraurban displacement associated with urban violence. In Buenaventura, we continued to offer consultations through a dedicated telephone helpline and comprehensive care for victims of sexual violence and women seeking​access to termination of pregnancy. 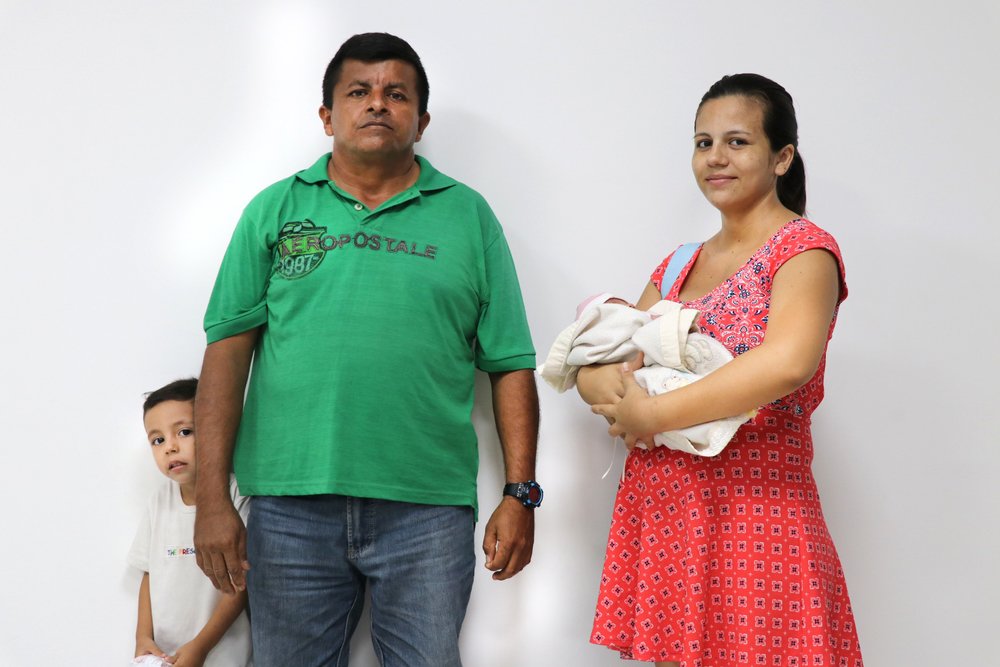 Esteban Montaño/MSF
A Venezuelan migrant family in Tibú, in the border department of Norte de Santander, where MSF provides healthcare. Colombia, May 2019.

In the midst of this panorama of increasing violence resulting from the inconsistent implementation of the peace agreements, Colombia has become a country of transit and refuge for millions of people fleeing Venezuela’s social, political and economic crisis. According to official figures, there are around 1.6 million Venezuelans in Colombia, and although most of them live in the main cities, thousands have settled in departments near the border with Venezuela, such as La Guajira, Norte de Santander and Arauca, where they are affected by the conflict and the government response is much more limited.

In response to the growing needs of the Venezuelan population in Colombia, MSF established three projects focused on general healthcare, mental health and sexual and reproductive health in these departments, targeting in particular pregnant women and children under the age of five. Our teams provided assistance in the municipalities of Riohacha, Tibú and Tame and conducted mobile clinics several times a month in places such as Uribía, Maicao and Manaure in La Guajira; Puerto Santander and La Gabarra in Norte de Santander; and Saravena and Arauquita in Arauca. 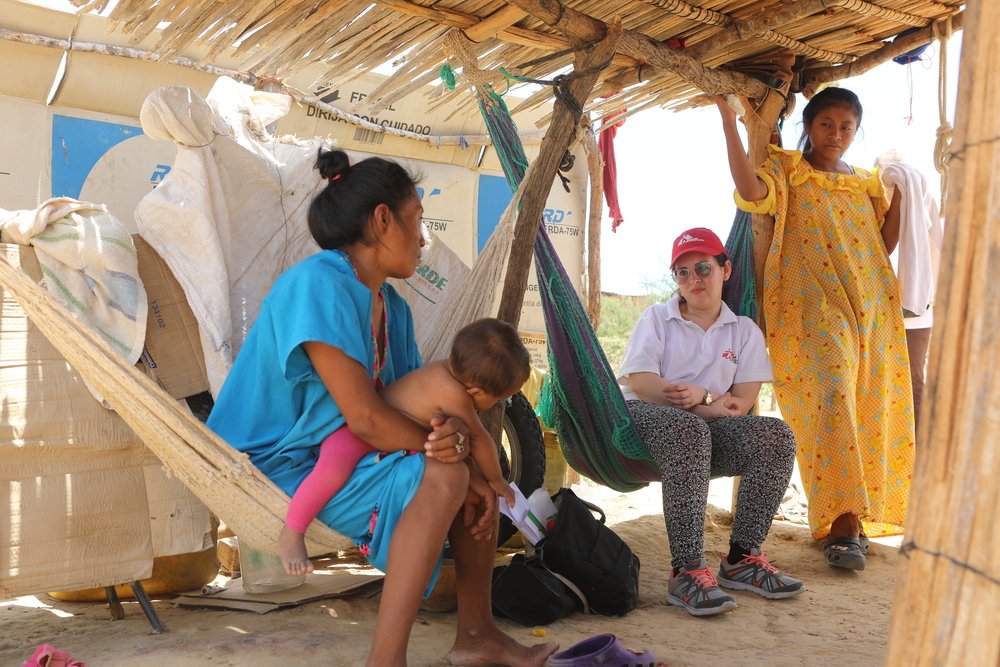 During their activities, our teams observed the multiple vulnerabilities of Venezuelan migrants and asylum seekers who have not been able to regularise their status in the country. As well as the risks of recruitment by armed groups and forced prostitution, they face problems in obtaining medical assistance, as the public health system excludes them from all services other than childbirth, vaccination and medical emergencies. They also struggle to access education, shelter and work where they are not exploited or exposed to danger.

Advocating on behalf of vulnerable women and migrants

Our advocacy work is aimed at improving women’s access to safe termination of pregnancy. As part of the strategy, the report Unsafe Abortion, Women at Risk was published to expose the social, economic and institutional barriers that prevent access to this service. The report highlighted that 88 per cent of the 428 patients treated by MSF in 2017–2018 faced at least one of the following barriers: social obstacles (social stigma or harassment by family members and friends); economic or geographical obstacles; a lack of information about the law regarding the termination of pregnancy.

Twenty-seven per cent of our patients who requested a safe abortion in a health facility prior to coming to MSF had had their request refused. MSF helped 460 women in the termination of their pregnancies and accompanied 120 to have the procedure carried out in a public hospital. As a result of the findings in the report, we called on the health authorities to ensure the prevention of unwanted pregnancies by increasing and simplifying access to efficient family planning services, with an emphasis on adolescents living in poverty or in rural environments.

We also called on them to prevent deaths and other consequences of unsafe abortions by making comprehensive safe abortion services available and accessible to women and girls across the country. MSF called for greater international investment and operational presence, particularly in conflict zones, and for more assistance in sexual and reproductive health activities for the migrant population.