On 13th May 2021, MSF announces the relaunch of its search and rescue activities in the central Mediterranean to save the lives of refugees and migrants attempting the deadly sea crossing from Libya.

Every year, thousands of people flee violence, insecurity, and persecution 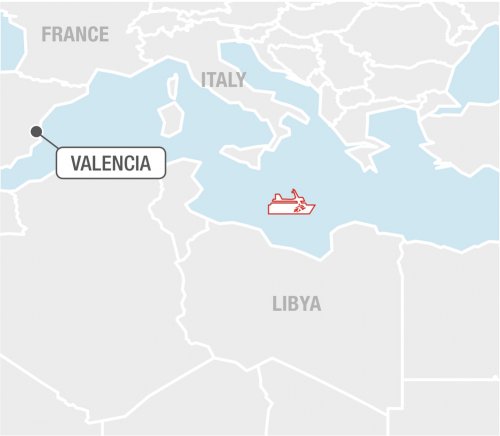 They attempt a treacherous journey via North Africa and Turkey, in an attempt to cross the Mediterranean to reach Europe.

And every year, countless lives are lost on these journeys.

An estimated 2,133 people have drowned while attempting to cross from Libya to Europe by sea in 2018.

"A mass grave is being created in the Mediterranean Sea. Faced with thousands of desperate people fleeing wars and crises, Europe has closed its borders, forcing people in search of protection to risk their lives and die at sea. There is no more time to think, these lives must be saved now."
LORIS DE FILIPPIPRESIDENT OF MÉDECINS SANS FRONTIÈRES/DOCTORS WITHOUT BORDERS (MSF) ITALY

MSF returns to sea to continue saving lives in 2021

Even when there are no rescue boats at sea, people still risk their lives by trying to cross the Central Mediterranean in flimsy rubber and wooden dinghies.

For many, this deadly crossing is the last resort. A lack of search and rescue capacity only serves to make the risks they endure more extreme.

The number of people attempting to escape mostly from Libyan and Tunisian shores by sea in the first four months of 2021 has tripled in comparison to the same period last year, as the number of deaths and missing persons.

As of 13 May 2021, Médecins Sans Frontières/Doctors Without Borders (MSF) is chartering its own ship, Geo Barents, to save lives and provide emergency medical care to people rescued on the Central Mediterranean.

This is the seventh consecutive year MSF teams have been compelled to launch search and rescue activities due to EU states abdicating their responsibility to provide proactive search and rescue in the central Mediterranean.

On 6 December 2018, MSF and its partner SOS Méditerranée were forced to terminate the lifesaving operations of the search and rescue vessel, Aquarius.

Since October 2018, as people have continued to flee by sea on the world’s deadliest migration route, the Aquarius has remained in port, unable to carry out its vital humanitarian work.

This is due to a sustained smear campaign, spearheaded by the Italian government and backed by other European countries to delegitimise, slander and obstruct aid organisations trying to save the lives of vulnerable people in the Mediterranean.

Coupled with ill-conceived policies aimed at trapping people outside Europe’s borders, this campaign has undermined international law and humanitarian principles.

With no immediate solution to these attacks, MSF and SOS Méditerranée have no option but to end the operations of the Aquarius.

MSF search and rescue: the facts 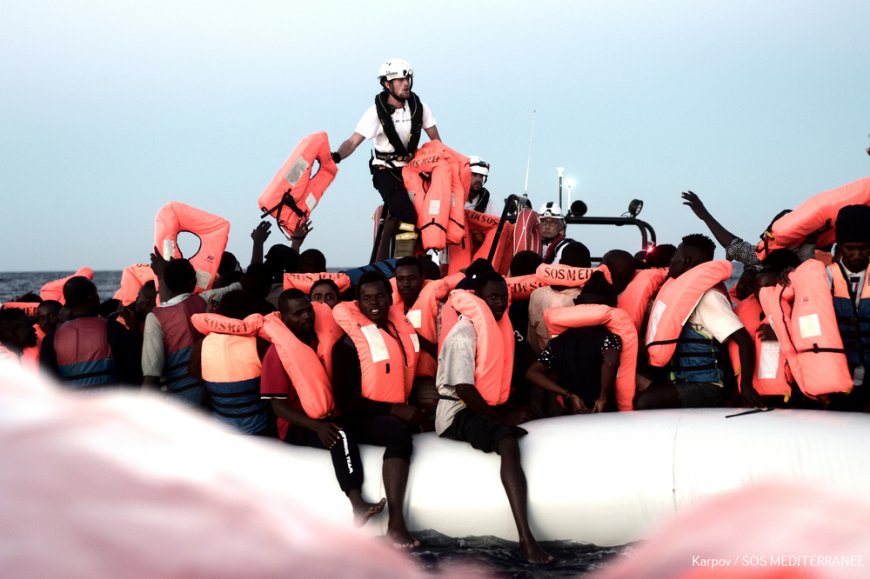 If deemed necessary to save lives, MSF boats approached the limit of international waters which are – by law – 12 nautical miles from the Libyan coast. Entering Libyan territorial waters is highly exceptional.

We looked out for boats in distress using binoculars and responded to directions from the MRCC in Rome in the event of an SOS call. Italian law states that not answering an SOS call from a boat in distress is an omission of rescue, subject to a penalty of one to five years of detention.

Non-governmental organisations account for a minority of search and rescue operations in the Central Mediterranean. EU assets, the Italian Coast Guard, commercial vessels and other actors are also involved in these operations, which are necessary to save lives.

Refugees, migrants and asylum seekers are not interchangeable terms. The following is a brief explanation of the very different legal definitions:

As a humanitarian agency involved in search and rescue, MSF does not have a mandate or means to assess the immigration status of the people we assist.

We provide medical care without judgment and strongly believe that no human being should drown when the means exist to prevent it.

Where are the people rescued at sea taken?

Our primary aim was to prevent loss of life, not to provide transport.

When a situation arose in which we had to intervene, we did so under the direction of the Maritime Rescue Coordination Center in Rome.

They also decided where those we rescued should disembark, as dictated by the laws of the sea.

As a rule, those we rescued were taken either to reception centers in southern Italy (Sicily) or transferred from search and rescue boats to Italian coast guard vessels.

A compromise to MSF’s neutrality?

We felt compelled first and foremost to assist people who were dying in the Mediterranean. We had the means and, for us, ignoring the problem was not an option.

Of course, we are aware that by doing this we are entering a very contentious political debate in Europe. But we believe that inaction cannot be justified on ideological grounds and that, in fact, as a medical organisation that takes its cues from medical ethics, we must take action.

MSF in the Mediterranean: 2018

Italy and other European governments effectively shut down search and rescue operations along the world’s deadliest migration route in 2018.

According to the International Organization for Migration, an estimated 2,297 people drowned or went missing in the Mediterranean Sea in 2018. The majority of these deaths occurred in international waters between Libya, Italy and Malta, along what continues to be the world’s deadliest migration route. Thousands who managed to survive were intercepted at sea and, with EU support, forcibly returned to Libya in violation of international law. In Libya, refugees and migrants routinely face abuse, torture, exploitation and inhumane conditions of detention, which have a severe impact on their physical and mental health. 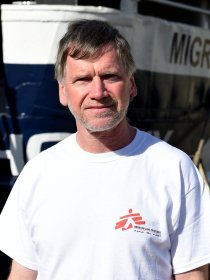 The search and rescue vessel Aquarius, operated by Médecins Sans Frontières (MSF) and SOS MEDITERRANEE, assisted 3,184 people in 2018. However, in June, the newly elected Italian government took the extraordinary step of effectively closing its ports to all rescued refugees and migrants, leaving the Aquarius and 630 vulnerable men, women and children on board stranded at sea for eight days, until they were able to disembark in Valencia, Spain – more than 1,300 kilometres away. 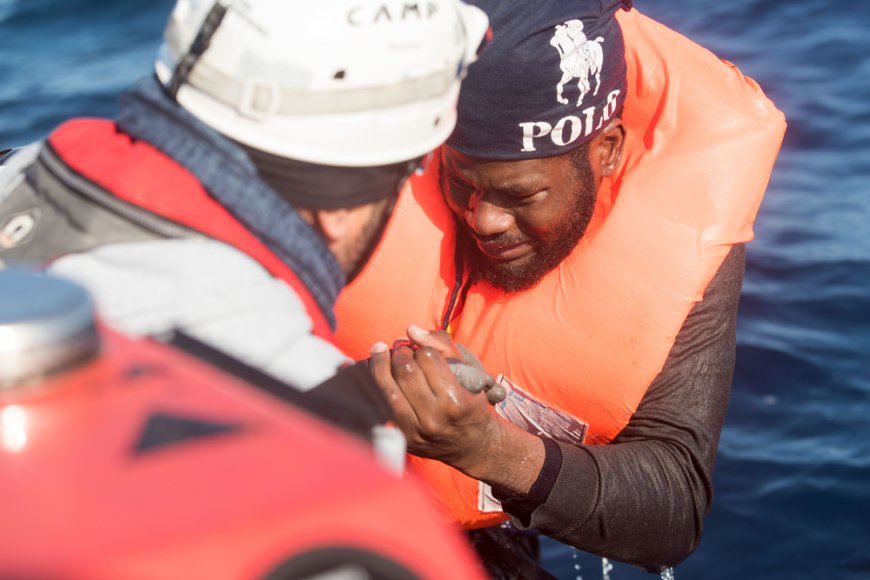 The move sent shockwaves through Europe and set a dangerous precedent that paralysed search and rescue activity in the Central Mediterranean. In the aftermath, governments failed to come up with a sustainable solution to share responsibility for survivors arriving on European shores. For the rest of the year, they and the ships that rescued them were left stranded at sea for days or weeks at a time until ad hoc agreements could be reached.

In August and September, the Aquarius came under further political pressure. Despite being in full compliance with maritime regulations and technical specifications, the ship was stripped of its flag and registration, first by Gibraltar, then by Panama, at the instigation of the Italian government. Without a flag, the Aquarius was unable to leave port to assist those in distress.

The longstanding campaign to criminalise NGOs who support refugees and migrants intensified in November when the Public Prosecutor’s Office of Catania requested the seizure of the Aquarius over dubious allegations of illicit waste trafficking at Italian ports. We immediately refuted claims that we had engaged in criminal activity or that the discarded food and clothing of survivors posed a transmission risk for diseases such as HIV, tuberculosis or scabies, but the politically motivated judicial proceedings further undermined our prospects of continuing lifesaving work on the Aquarius. 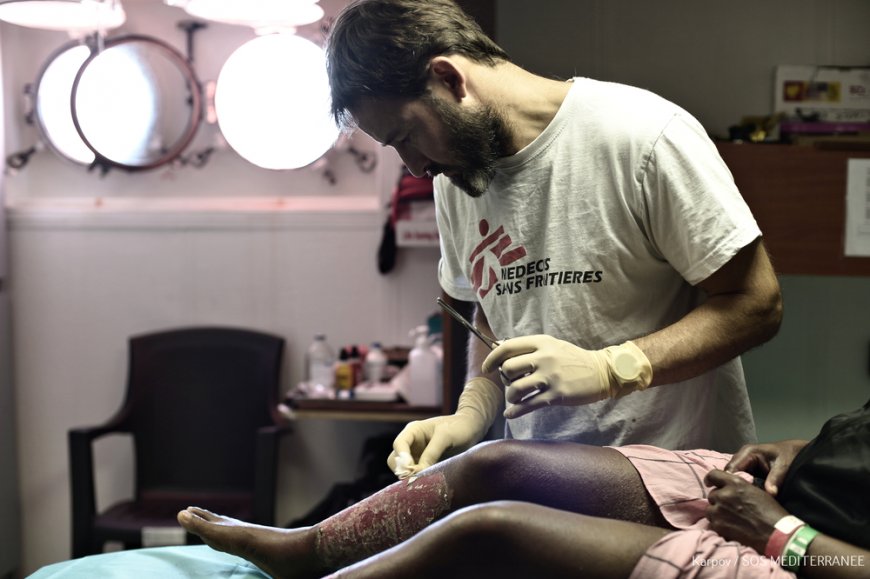 By the end of the year, MSF and SOS MEDITERRANEE were left with no choice but to end rescue operations on the Aquarius.

As European governments shirk their responsibilities and curtail the ability of aid organisations to offer assistance, the humanitarian crisis in the Central Mediterranean continues to present longterm challenges. As long as refugees, migrants and asylum seekers are drowning or being forced back to Libya in violation of international law, MSF will seek ways to reach them and provide medical and humanitarian care.