The human toll of the Gaza war is appalling.

Médecins Sans Frontières/Doctors Without Borders (MSF) has worked in Palestine since 1989 to help meet the medical and psychological needs of the population. 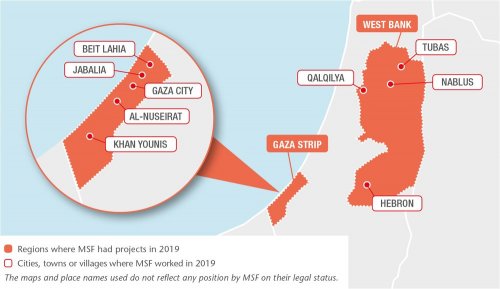 We provide medical and psychological assistance to people affected by the ongoing conflict in Palestine, continuing our long-running mental health programmes on the West Bank and support to victims of burns and trauma in the Gaza Strip.

Our patients have been exposed to critical events, such as witnessing violence, raids on their homes, arrests and deaths of family members, and consequently, they have developed anxiety, stress and sleeping problems.

In May 2021, an MSF team supported the staff in Al-Awda hospital in treating patients injured by Israeli airstrikes on Gaza. MSF also donated essential medical supplies for trauma care to different health facilities treating the wounded.

In our burns and trauma centres in the Gaza Strip, we treat patients, most of them children. The majority of patients had burns, usually the result of domestic accidents in conflict-damaged homes. There are three centres, in Gaza City, Khan Younis and Bet Lahyia.

In 2019, Médecins Sans Frontières (MSF) provided surgical and post-operative care to thousands of people injured in protests in Gaza, and mental health support to victims of political tensions on the West Bank.

The protests known as the Great March of Return, along the fence that separates Israel from the Gaza strip, continued throughout the year, with lower turnout and casualties compared to 2018. According to the United Nations Office for Humanitarian Affairs, 1,822 Palestinians were injured by the Israeli army with live ammunition in 2019, while thousands of people wounded in the protests during 2018 still required complex and lengthy treatment. Their massive medical needs far exceed the health system’s capacity, which has been crippled by the decade-long Israeli blockade, and lacks essential medical equipment and supplies.

Due to the severity and complexity of the injuries and the high rates of antibiotic resistant infections among our patients, we expanded the hospital and surgical capacity to a total of 36 isolation rooms, 19 beds in general wards and three operating theatres in Dar Al-Salam and Al-Awda hospitals.

In April, we opened the first laboratory equipped to analyse bone and soft-tissue samples in Gaza, an essential service to detect the bacteria causing infections in our patients. Previously, samples had to be shipped to Israel for analysis – a more complicated and time-consuming procedure.

In addition to our work with trauma cases, we admitted 5,531 burns patients to our clinics and supported the burns unit at Al-Shifa hospital with a team to perform elective surgery. 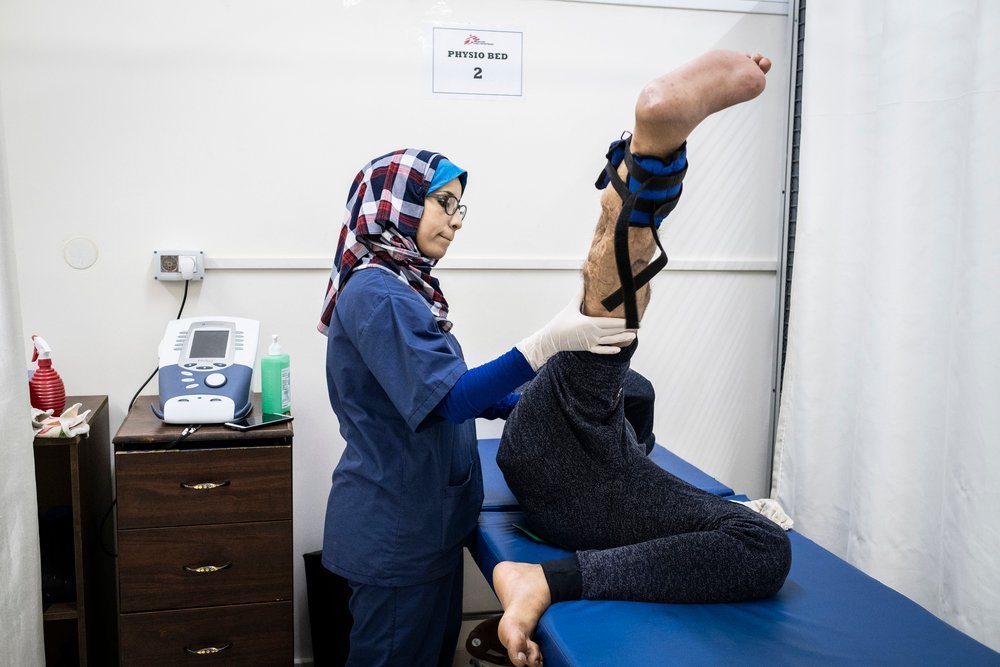 Sabrine Wadi, a physiotherapist working with MSF at Al-Awda hospital in northern Gaza, assists a patient with his exercises. Palestine, November 2019.

In a context of ongoing occupation and intensifying violence, our teams continued to offer free and confidential psychological support across the West Bank.

In Nablus and Qalqilya, we provided psychotherapeutic and psychiatric assistance, group therapy, group mental health awareness sessions and psychosocial support activities in two clinics, and in a new consultation room opened in Tubas in December.

find out more in our international activity reporT >