Less than half the population of South Sudan has access to adequate medical services, despite a period of peace and a promise of unity after years of civil war. 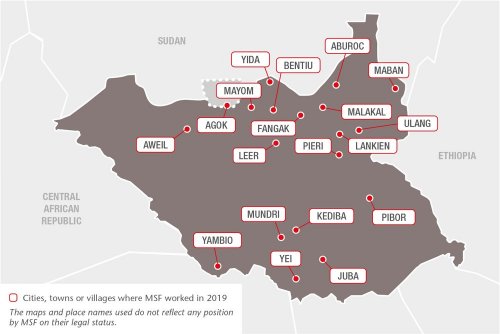 But, in December 2013, the landlocked country in eastern central Africa – home to more than 12 million people – was plunged back into chaos. A civil war erupted amid a power struggle between the president and his deputy.

Tens of thousands of people in South Sudan have died and roughly one in three people have been forced from their homes since the renewed conflict broke out in 2013. Two million people have fled to neighbouring countries, while another two million are displaced within South Sudan. Security also remained a major challenge for humanitarians in 2017, as their facilities came under attack and it became increasingly dangerous to work in some areas.

MSF operates primary and secondary healthcare programmes in hospitals and clinics, runs outreach activities for displaced people and remote communities, responds to emergencies and outbreaks as they occur and carries out preventive activities such as vaccination campaigns.

Médecins Sans Frontières (MSF) worked in 19 project sites across South Sudan in 2019. Activities ranged from treating gunshot wounds in Agok and providing comprehensive medical care in Protection of Civilians (PoC) sites, to vaccinating children against deadly diseases such as measles and ensuring Ebola preparedness at the border with the Democratic Republic of Congo.

Most medical services in South Sudan are delivered by NGOs, as only 2.6 per cent of the government’s budget is allocated to health. For many communities, treatment is often difficult to reach or simply inexistent.

Nearly one million people were affected by unprecedented heavy flooding, which began in July. On 30 October, the South Sudanese government declared a national state of emergency. Thousands of people were displaced, including many of our local colleagues, who lost their homes, crops and livestock.

To respond to the health needs, we deployed emergency teams in and around Pibor, Maban, Lankien and Ulang. 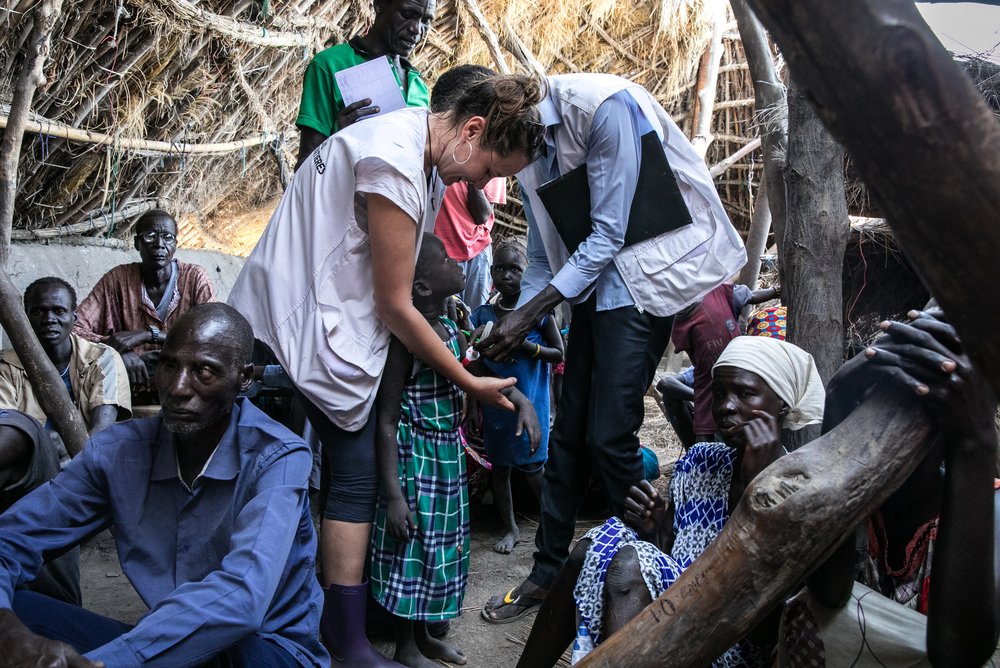 Nicola Flamigni/MSF
A child is checked for malnutrition during MSF’s emergency response to the unprecedented heavy flooding in Ulang. South Sudan, November 2019.

In Pibor, one of the worst affected areas, our health centre was submerged and destroyed. A temporary tented facility was set up to provide care for people in Pibor, Maban and Gumuruk, including outpatient, inpatient and maternity services. Mobile clinics were set up in all areas where we were working to prevent and treat malaria, respiratory tract infections, diarrhoea, skin infections and malnutrition.

We also repaired latrines and boreholes, set up water purification systems to supply safe drinking water to the displaced and host communities and distributed thousands of relief items to those most affected by the flooding. These included water purification solution and mosquito nets people could use themselves to prevent diseases such as diarrhoea and malaria.

Working with the community to tackle malaria

In 2019, malaria remained a major health concern in South Sudan. We treated more than 292,100 adults and children and ran prevention and awareness-raising activities in nearly all our projects. Strategies included distributing mosquito nets and implementing new outreach methods.

For example, in March, we introduced integrated community case management in Old Fangak, delivering malaria rapid tests and treatment through trained community health workers in remote settings that have limited access to healthcare. Teams treated 530 patients for malaria and 3,450 patients for simple diarrhoea in 2019.

Our staff in Yambio also worked on treating and preventing malaria at a community level, conducting 38,000 general consultations and treating 24,900 patients, as well as administering seasonal malaria chemoprevention (oral treatment to prevent the disease) to more than 48,100 of the most vulnerable children aged between three and 59 months.

The United Nations PoC sites in Bentiu and Malakal, where we manage a hospital in each, offer protection to vulnerable people who would otherwise be exposed to armed violence. In these sites, the humanitarian and medical needs are great due to poor living conditions, ongoing violence and mental trauma. MSF has repeatedly called for conditions and services within the sites to be improved beyond current levels, in particular water and sanitation. 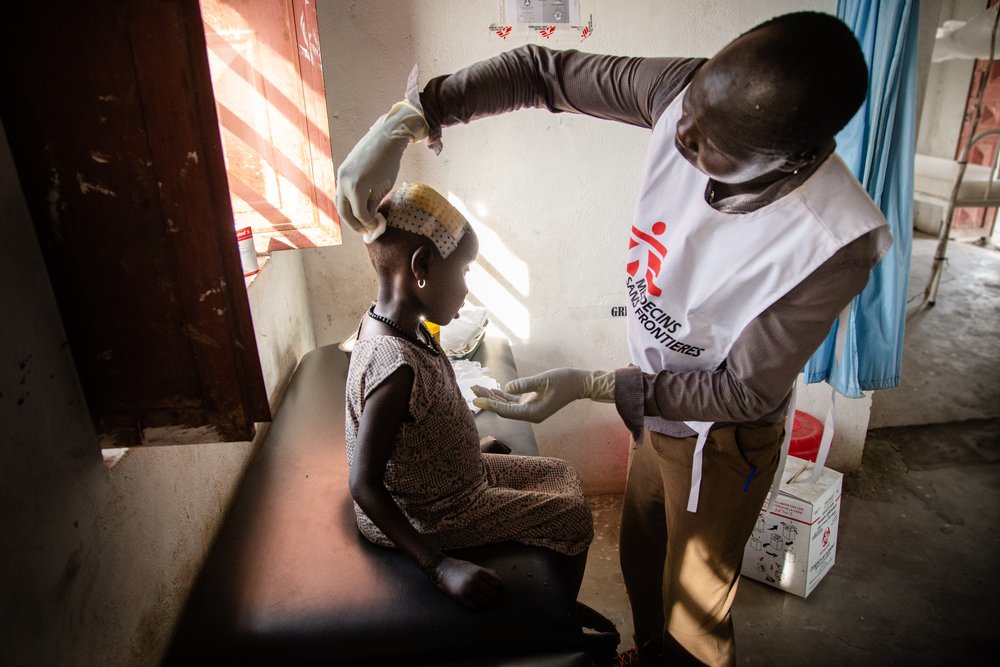 Igor Barbero/MSF
An MSF staff member examines the head injury of a young girl at a hospital in Ulang. Northeast South Sudan, April 2019.

At our 55-bed hospital in Malakal PoC, where we offer a range of general and specialist services, mental health is also an important focus. Many of the patients have experienced extreme levels of violence and feel a sense of despair because of their environment and situation. We conducted 3,090 individual and group mental health consultations in 2019, most of them in the hospital’s outpatient department.

In Bentiu, the largest PoC in South Sudan with over 100,000 people, we provide specialist healthcare, surgery and emergency services for adults and children in our 160-bed hospital. The Bentiu and Malakal projects also include community outreach activities, such as treatment for infectious diseases at local health centres, raising awareness on prevention and identifying people who may need medical treatment.

In Bentiu, the largest PoC in South Sudan with over 100,000 people, we provide specialist healthcare, surgery and emergency services for adults and children in our 160-bed hospital. The Bentiu and Malakal projects also include community outreach activities, such as treatment for infectious diseases at local health centres, raising awareness on prevention and identifying people who may need medical treatment.

In Yei, we support the hospital’s paediatric ward and manage a general healthcare clinic, which offers vaccinations, mental health support and referrals. Outside the town, our staff work in health centres in areas affected by the ongoing violence, which has displaced many people. In some areas of Yei River state, the security forces occupied clinics and there were reports of harassment and abuse of healthcare workers. 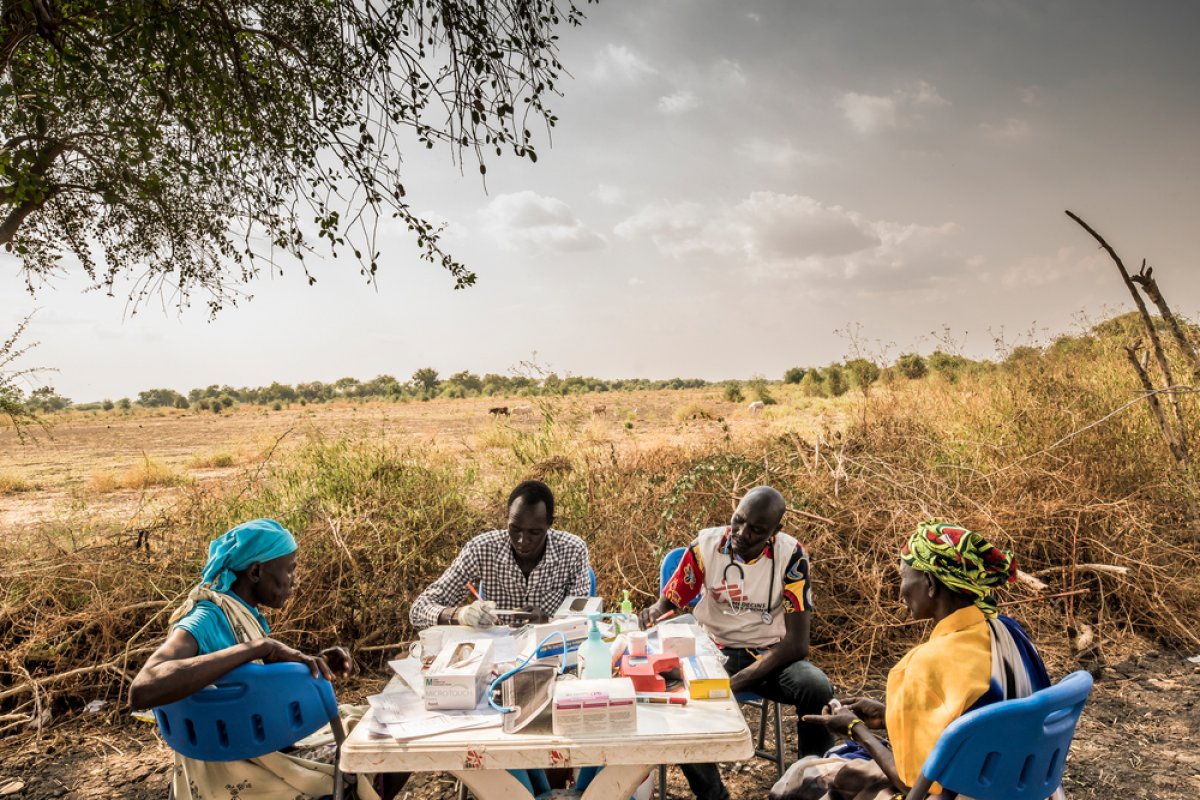 Frederic NOY/COSMOS
Patients attend a mobile medical clinic in the village of Kier, on the banks of the Pibor River, South Sudan, December 2017.

In Maban, we provide services in our hospital in Doro camp, which hosts around 60,000 refugees. Our staff also work in the outpatient department in Bunj hospital, which serves some 30,000 people. In 2019, an outreach team undertook regular assessments and spot interventions to address unmet needs around Maban county, such as a lack of basic healthcare and safe water for displaced people.

Additionally, in its first phase of activities in South Sudan, the MSF Academy for Healthcare increased the number of trained healthcare professionals in Pibor by bolstering the skills of 42 students. We continued to assist Sudanese refugees in the area.

MSF vaccinated or supported the vaccination of over 96,400 children against measles in Yambio, Malakal, Bentiu PoC site, Aweil, Pibor and Maban. We also provided case management wherever possible.

Protection of Civilians sites in South Sudan have been in operation for more than five years after people fleeing the conflict sought safety at existing UN bases. These sites afford a level of protection to vulnerable populations who would otherwise be exposed to armed violence outside them. Poor living conditions, ongoing violence and mental trauma have created enormous medical needs in the country’s largest PoC site, in Bentiu. Our 160- bed hospital is the only provider of secondary health services inside the PoC, including surgery and specialist care for newborns and complicated deliveries. In 2018, we treated 398 victims of sexual and gender-based violence in the PoC and in a clinic in Bentiu town. Nearly a third of all these cases occurred in a period of just a few weeks following an attack on women and girls in Rubkona county in November 2018. We also set up six malaria treatment points and provided care to over 38,000 patients following a sharp increase in malaria cases in July. 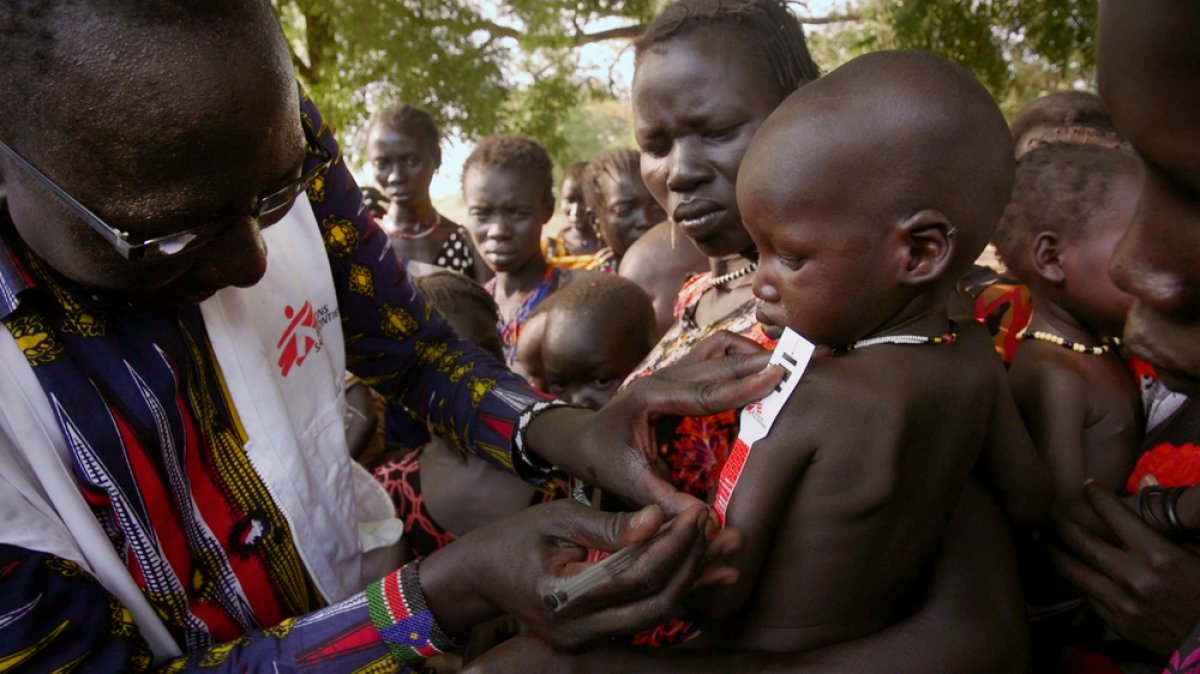 In Malakal PoC site, which hosts about 29,000 people, we run a 40-bed facility offering emergency care, treatment for tuberculosis (TB), kala azar (visceral leishmaniasis) and HIV, as well as mental health services. Our teams there documented an alarming rise in the number of suicide attempts in 2018, evidence of the consequences of long-term displacement, unemployment and limited prospects. We also work in Malakal town, providing the same services as in the PoC, with the addition of neonatal and obstetric care, including for complicated deliveries.

In April, we reopened our maternal, emergency and reproductive services in Leer, closed in 2016 due to repeated attacks on our patients and staff. In the first month alone, we treated 300 people, including more than 100 pregnant women.

In Aweil, we manage a regional hospital that includes a maternity component. This hospital also serves as a training ground for nurses and midwives of a local school, while three physicians are receiving essential surgical skills training there.

Our 80-bed hospital in Lankien also provides obstetric and paediatric care, nutritional support and treatment for HIV, TB and kala azar. Treatment for victims of sexual and gender-based violence, which is integrated into all our projects in South Sudan, is available too.

In and around Maban, we assist Sudanese refugees and the local community through our activities in Doro refugee camp and support to Bunj state hospital. We also continue to run a 15-bed inpatient department for refugees in Yida, but handed over our HIV/TB treatment programme to another organisation in May 2018.

In Abyei, a disputed area between Sudan and South Sudan, we completed the reconstruction of our hospital in Agok in February. It is the only secondary healthcare facility in the region and has eight wards, an operating theatre and a pharmacy.