Yemen is in the midst of a civil war.

Since March 2015, a Saudi and Emirati-led coalition has been fighting anti-government Ansar Allah forces, resulting in widespread destruction, bombing and gun battles.

Recent outbreaks of diseases such as cholera and diphtheria, as well as the arrival of COVID-19, have exacerbated the already dire humanitarian situation in Yemen.

More than three million people have been displaced since the war started in 2015.

Donate now and make a difference in Yemen >

With an estimated 20 million in need of humanitarian assistance, our activities in Yemen are among our most extensive worldwide.

We work in 12 hospitals and health centres across the country and provide support to more than 20 hospitals or health facilities across 11 governorates.

Unfortunately, COVID-19 is now circulating widely across the whole of Yemen. It’s most evident in our intensive care unit in Sana’a, which has 15 beds and has been full most of the time in June, and where the team have witnessed a high rate of deaths.

MSF is extremely concerned about how COVID-19 might affect those living in precarious situations, including people living amid the conflict in Yemen.

Yemeni hospitals are struggling to meet the existing needs of people and the spread of COVID-19 would place enormous strain on an already broken system.

After the first case of COVID-19 was confirmed in Yemen on 10 April, MSF called for the authorities there to urgently allow the entrance of supplies and humanitarian staff into the country to prepare a response to the disease.

While the various authorities in Yemen have taken some steps to plan a response to COVID-19, an effective response to the disease is almost impossible with the existing resources in the country.

Between January and March 2019, we have admitted 7,938 suspected cholera cases to our health facilities in Amran, Hajjah, Ibb and Taiz governorates.

From 1 January to 26 March, the number of cholera patients treated by MSF increased from 140 to 2,000 per week. Diagnostic tests carried out over the same period showed that the percentage of cholera-positive cases increased from 58 to 70 percent.

We have bolstered centres in Ibb and Kilo and opened a cholera treatment centre in Al Kuwait hospital in Sana’a.

Between 2016 and 2017, two waves of cholera hit Yemen. Although the disease was subsequently brought under control, health authorities and medical organisations have continued to see cholera cases in almost all regions of the country since the end of the last outbreak.

Warring parties have destroyed much of the country's public infrastructure, including health facilities. Following the imposition of a blockade by the Saudi-led coalition in 2015, import restrictions coupled with high inflation have crippled Yemenis' access to healthcare and other essential services.

Furthermore, many of the country's 50,000 health workers have not been paid since August 2016 and have consequently left the public health system, forced to look for other sources of income.

Since the beginning of the conflict in March 2015 and until the end of 2017, MSF treated more than 72,000 patients wounded by violence in our medical facilities and MSF-supported clinics.

According to the Yemen Data Project, more than 16,000 air raids have been recorded in the last three years - roughly 15 a day. 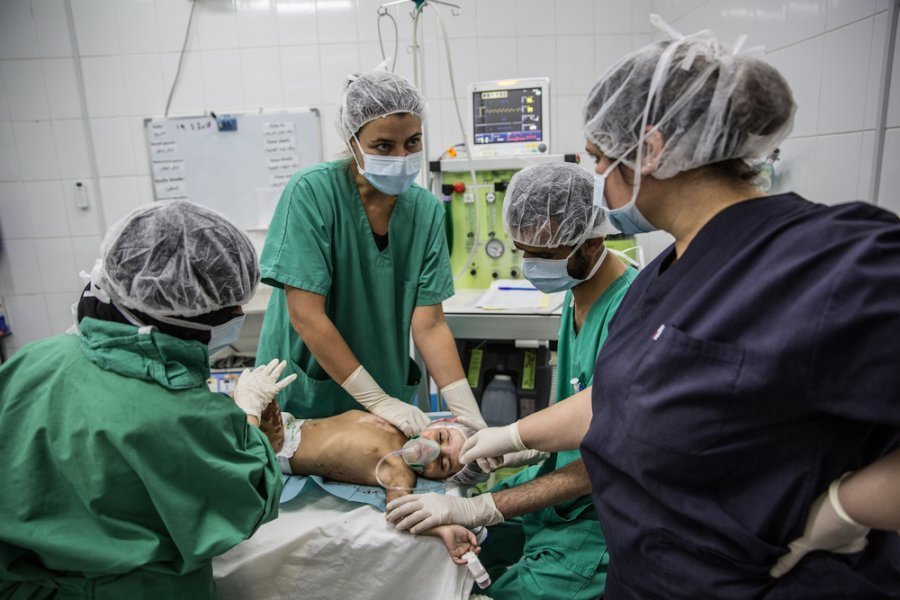 Even where medical facilities are operational, most people are no longer able to afford the transport costs to go to them.

This means they are unable to seek timely care, and easily curable health conditions are turning deadly when left untreated. Women often give birth at home and seek care only when complications occur. Malnutrition among children also remains high.

We opened 37 cholera treatment centres and oral rehydration points and admitted 101,475 patients in response to a cholera outbreak in 2017.

Because of the war it is even harder for people to access clean water, dispose of waste and get medical care. As the cholera epidemic subsided, we began to see cases of diphtheria, a disease eradicated from most countries thanks to systematic childhood vaccinations. The last case in Yemen had been recorded in 1992. 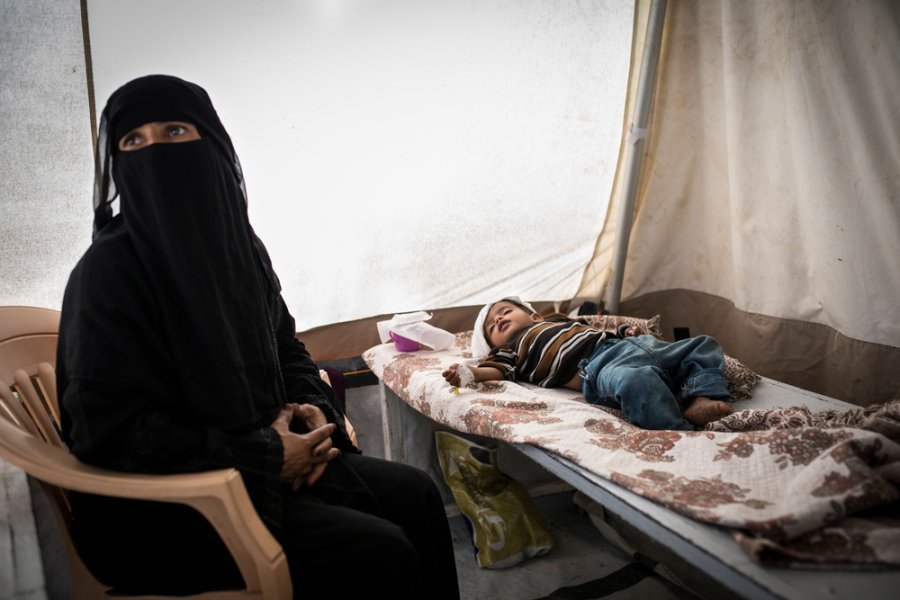 This is the second time within a few weeks Reda has brought her son Muhatasein to the MSF cholera treatment centre in Qaeda hospital, Ibb Governorate. September 2017.

MSF teams performed 19,728 surgical interventions in Yemen during 2017. We saw an increase in the number of patients admitted to the emergency surgical hospital we run in Aden, not only from the frontlines, but also due to an upsurge in violence within the city.

Since 2015, four of Yemen's 32 kidney treatment centres have been forced to close. The 28 remaining centres are running out of essential supplies, so treatment is often interrupted.

We support six dialysis treatment centres and over the past two years have imported more than 800 tons of dialysis supplies and provided over 83,000 dialysis sessions for some 800 patients. More than 4,400 renal failure patients remain in urgent need of care. 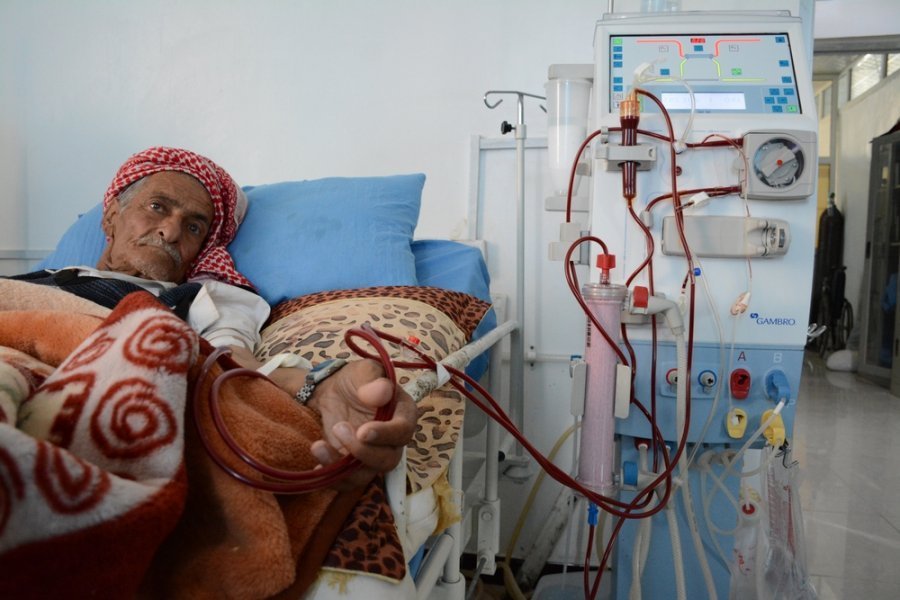 A man undergoes dialysis in Al-Jumhori hospital in Sana’a. May 2016. 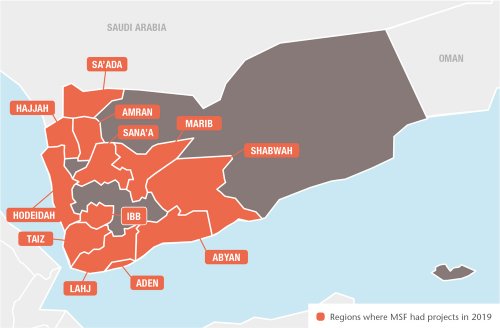 Map with all MSF projects in 2019
Although the number of airstrikes decreased in the last quarter of 2019, ground fighting continued across several governorates throughout the year, as frontlines shifted, causing waves of displacement and many thousands of casualties.

The destruction of health facilities, and shortages of skilled medical staff, medicines and medical supplies, have contributed to the breakdown of the health system.

Médecins Sans Frontières (MSF) worked in 12 hospitals and health centres and provided support to more than 20 health facilities across 12 governorates in Yemen in 2019.

Insecurity and access constraints prevented us – and other organisations – from collecting reliable data on nutritional and humanitarian needs across the country. In Hajjah, Sa’ada, Amran, Ibb and Taiz governorates, our teams treated 7,330 children for malnutrition in inpatient feeding programmes during the year

From the beginning of 2019, our staff witnessed numerous attacks on patients, medical facilities and civilians.

In April, we resumed our activities in Aden surgical hospital after a month of suspension following the kidnapping and killing of a patient. The situation in the city throughout 2019 remained unstable as different groups fought for power.

The MSF hospital received mass casualties on several occasions; during an incident in August, our teams treated 119 people in less than 24 hours. In the same month, we performed 800 violence-related surgical interventions. 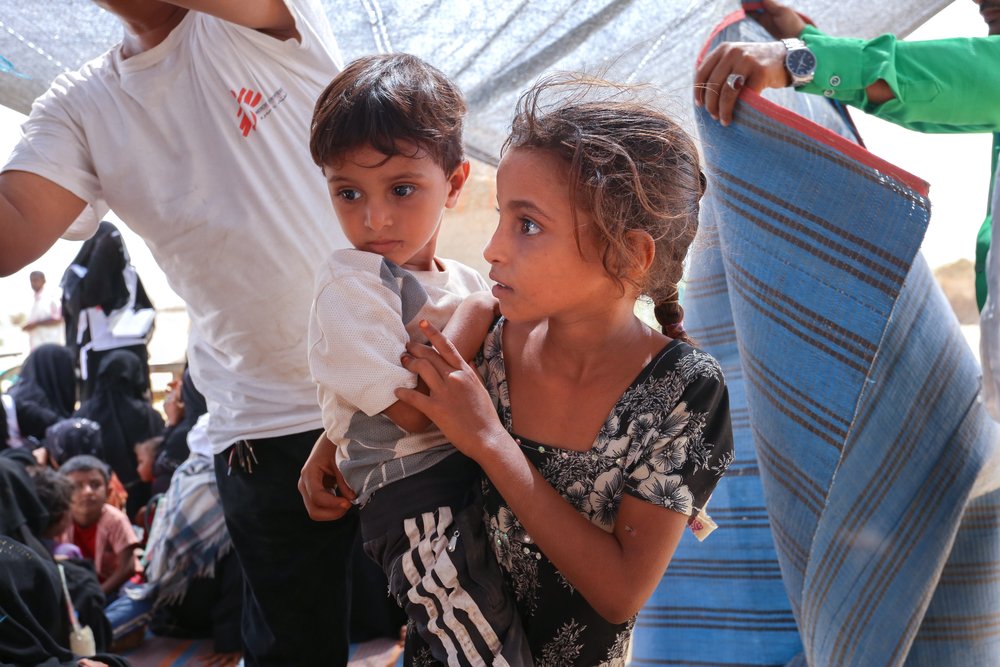 Hareth Mohammed/MSF
Displaced children in northern Abs, where MSF operated mobile clinics to provide consultations, vaccinations and referrals to the hospital we support there. Yemen, April 2019.

MSF-supported Al-Thawra hospital in Taiz city was subjected to 11 armed intrusions, during which one patient was killed. We reiterated our call for pledges ensuring the protection and safeguarding of health facilities, medical workers, patients and their caregivers to be upheld and respected.

On 6 November, a hospital we run in Mocha, southwestern Yemen, was severely damaged when surrounding buildings, including a military warehouse, were hit during an aerial attack. Fortunately, there were no casualties and we were later able to reopen the hospital.

MSF and MSF-supported facilities have been hit by aerial attacks six times since the start of the conflict, impeding our ability to provide care.

Assisting the displaced in Hajjah and Ibb governorates

The number of patients seeking healthcare in Abs hospital in Hajjah increased, partly due to ongoing fighting in the north of the district. In October, we admitted more than 7,000 patients to emergency rooms, the highest number since we started supporting the hospital in 2015.

The number of displaced people swelled from 100,000 to approximately 120,000 in the first half of 2019. Many lacked the most basic necessities, such as water, food, shelter and access to medical care. Abs hospital is the only facility providing specialist medical services to over 1.2 million people living in Abs and the surrounding districts.

Ibb, one of the most populated governorates in Yemen, is thought to host hundreds of thousands of displaced people who have fled the frontlines in neighbouring Hodeidah, Ad Dhale and Taiz. MSF runs the emergency room, operating theatre, intensive care unit and inpatient department at the hospital in Dhi As-Sufal district, close to Taiz, which serves a population of several hundred thousand.

Lifesaving care for mothers and children

MSF provides maternal and child healthcare in most of the governorates we support in Yemen. The demand is high and increases each year. On several occasions during 2019, our mother and child hospital in Taiz Houban, in Taiz governorate, was filled to capacity. In 2019, MSF teams assisted more than 5,900 births in Taiz, Hajjah and Ibb.

Many mothers, children and newborns died in or on arrival at hospitals that MSF runs or supports in Yemen. Many newborns brought to us for care had a low birthweight or were born prematurely, at home or in small private clinics. The most common causes of death among newborns were prematurity, birth asphyxia and sepsis. 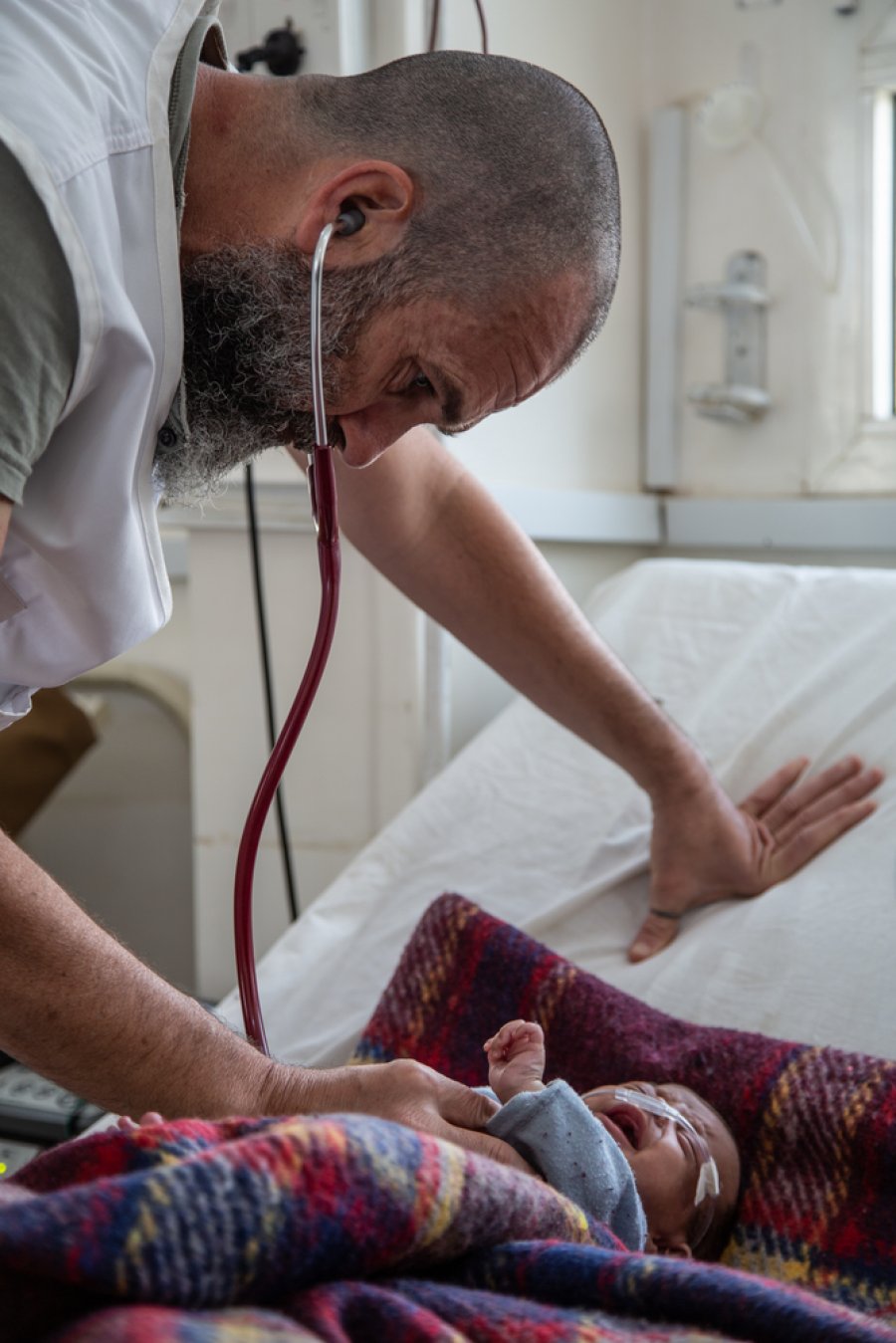 The high numbers of deaths are linked to many factors, most of which are a direct result of the war. They include the lack of functioning health facilities, insecurity and active fighting preventing people from seeking care, and an inability to pay for treatment.

In response to the increased maternal and child healthcare needs, MSF started to build a new maternity hospital in Al-Qanawes to serve Hajjah and Hodeidah governorates.

Outbreaks of infectious diseases are common in Yemen, due to poor sanitation, a lack of clean water, a shortage of vaccines and gaps in the regular vaccination programmes. Between January and April, we admitted 15,265 suspected cholera patients to our facilities and opened cholera treatment centres in Khamer and Taiz, with 50 and 60 beds, respectively. Our teams also supported facilities in Abs, Ibb, Kilo and Taiz, and opened two in Sana’a and in Aden. From the end of April, as the number of cholera cases decreased across the country, we either closed facilities or reduced their bed capacity, but remained ready to respond to further outbreaks.

An increase in the number of measles cases was reported between late December 2018 and February 2019. During this period, MSF treated people with measles in Abs, Haydan, Ibb, Khamer and Taiz. In mid-February, the local authorities in the northern governorates launched a measles vaccination campaign, which helped reduce the number of new cases.

An increase in the number of measles cases was reported between late December 2018 and February 2019. During this period, MSF treated people with measles in Abs, Haydan, Ibb, Khamer and Taiz. In mid-February, the local authorities in the northern governorates launched a measles vaccination campaign, which helped reduce the number of new cases.