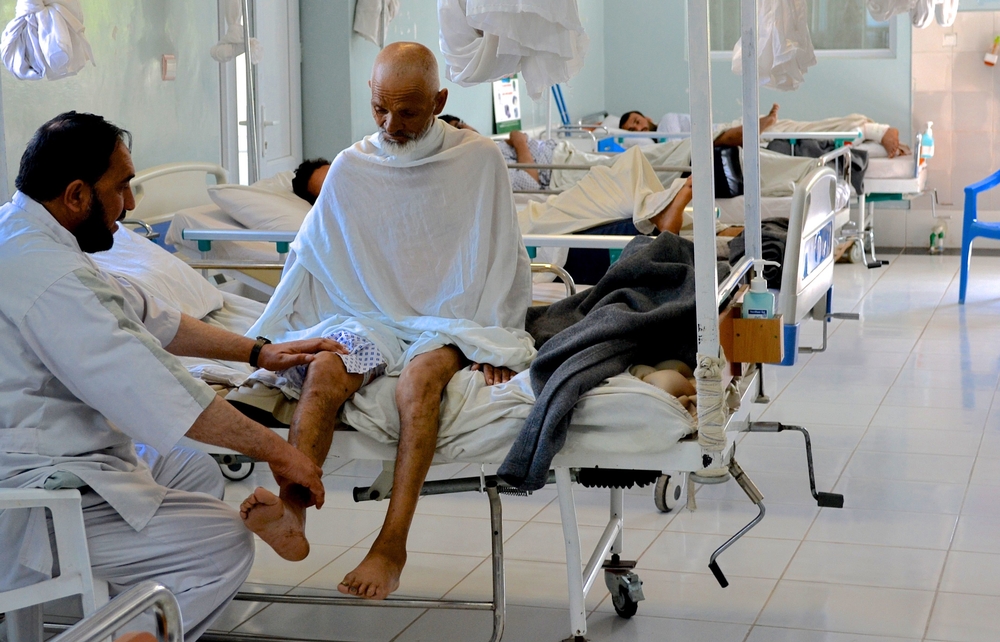 Dr Declan Barry medical team leader at MSF’s trauma centre in Kunduz, northern Afghanistan from March - September of this year. The trauma hospital is the only one of its kind in the region, providing surgery to victims of bomb blasts and gunshots. He describes one night of the most intense ‘fighting season’ in years, this June.

Ten stretchers were lined up – six in the yellow zone, four in the red – holding ten boys aged from eight to 18, following a mortar bomb that had landed outside their madrasa earlier that evening.

Two boys died instantly. The community decided to bring only the ten most severely injured to our hospital, as the journey itself was very dangerous.  One of our staff living beside the madrasa called ahead to warn us.

With the arrival of these ten boys, the emergency room staff  activated their mass casualty plan – a fast-paced strategy designed for when the number and severity of cases exceed the normal capacity of the hospital.

The boys were quickly triaged: red – needing immediate life or limb-saving attention; yellow – needing immediate medical attention but stable enough to wait for surgery; green – minor injuries; and black – dead or dying. Only red and yellow were in this group – the others had conveniently been left behind.

There was a stillness about the boys on their stretchers. Unlike men, whose grown bodies would fill out across the entire surface, these boys were framed wholly within the stretchers, giving the disturbing sense of coffins.

The blast had injured one boy’s eye, which would now have to be removed. Beside him, a boy with a penetrating abdominal injury looked around. Next to him was an older boy with head trauma and his right hand blown off.

The emergency list for the operating theatre was getting very long. Earlier that evening, a rocket had landed in a home not far away, just as the family gathered for Iiftar after a day of Ramadan fasting. By the time I arrived, a young child was already wrapped in an oversized body bag.

Two women and a child were being stabilised in the resuscitation room, and a further four family members were in the observation room. A bewildered young man, with red stains lapping down the front of his shalwar kameez, rotated between his family members. Outside, a group of women wailed from beneath their burkas at the death of the child.

“It’s ok, we have it under control,” reported one of our Afghan doctors confidently. Odd words, “under control” – I’m not sure that family would agree – but from our medical perspective it was entirely true.

Our staff were well used to this by now, working in Kunduz trauma centre during the fighting season of the busiest year of this protracted conflict since MSF opened the hospital in 2011.

While this is what is expected in a trauma centre, there has been something different about these past five weeks – it’s been much more intense, more relentless. The injuries have been more complex, more devastating – and just ‘more’.

The constant pressure on beds demands choices that define what it is to work in these circumstances.

MSF
In 2014, more than 22,000 patients received care at Kunduz hospital and more than 5900 surgeries were performed.

There was a boy from the madrassa incident with an open skull fracture. One principle in this situation is to focus on those with the best chance of survival, so those with lower chances are deprioritised until the others are stable. Such was the case with this boy.

While technically possible, we were already way beyond capacity, and there would simply be no space left to provide the post-operative care required for him to survive.

Demand on the already-full intensive care beds was presently being juggled for other patients who were already on the operating table. The situation was beyond tight. He would have to be referred elsewhere.

With no other intensive care unit in the province, Kabul – half a day’s ambulance trip away - was the only option.

Despite the doctor's' explanation, the family refused. "You take him here,” they insisted. The doctor asked for my help. This nine-year-old boy was the only child of a couple who had tried for many years to conceive. They said this, hoping that the detail would hold some gravity in the decision making process.

But all of this human reality could not squeeze another intensive care bed or specialised staff member into the hospital.

These impossible decisions are not reserved for a mass casualty night such as this. They surface numerous times a week for our new intensive care doctor, since the day she arrived from Australia five weeks ago for her first stint with MSF.

The demand for critical care consistently teeters on the edge of our capacity, and often spills over. Despite the many lives that are saved here on a daily basis, it’s these failures that resound, in the bewilderment of “it’s still not enough”.

This was the third mass casualty incident in ten days. All three operating theatres ran through that night, completing 21 surgeries. By the morning, the boys had melted into the other 85 beds of trauma victims. And the day pressed on – it is fighting season after all.

Find out more on MSF's work in Afghanistan