Afghanistan: “In just one day we performed 10 surgeries on people injured by violence”

Fighting in Afghanistan has been intense since May, but in recent weeks the clashes between the Afghan army and the Islamic Emirates of Afghanistan (also known as the Taliban) have increased in intensity and have moved into more urban areas such as Lashkar Gah city in Helmand Province.

“There has been relentless gunfire, airstrikes and mortars in densely populated areas. Houses are being bombed, and many people are suffering severe injuries,” explains Sarah Leahy, coordinator of the MSF Helmand project.

“Fighting within the city makes it harder for us to respond; our staff are part of the community and they, like many people, are afraid to leave their homes. It’s just far too dangerous and life is at a standstill. Some of our colleagues are staying overnight in the hospital as it’s safer, but also so they can keep on treating patients. The situation has been dire for months but now it is even worse.” 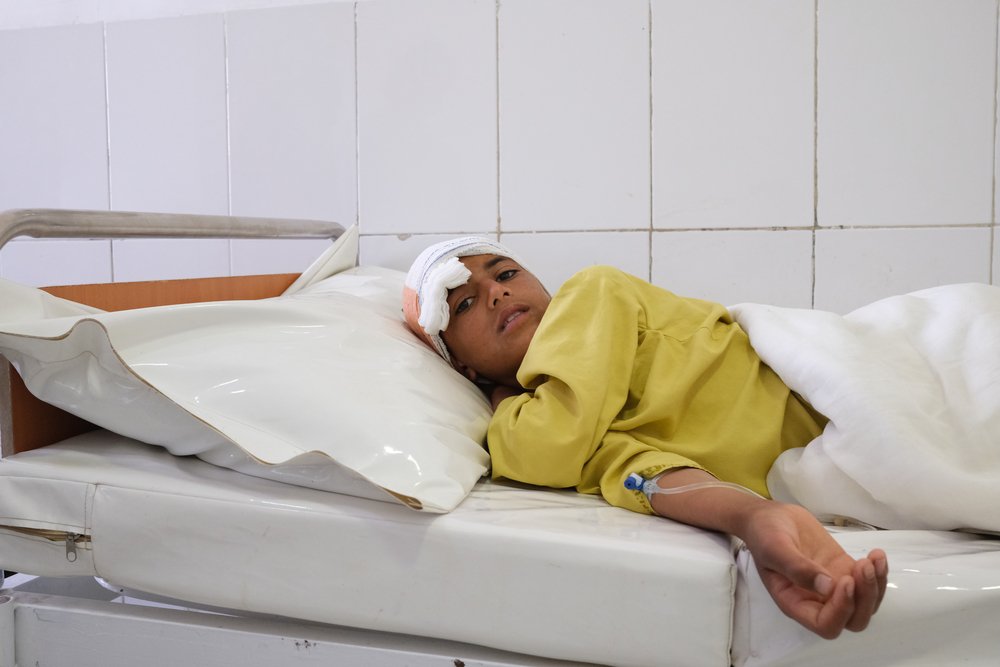 MSF/Tom Casey
Samiullah, 12 years old, suffered a gunshot wound to the head. His family had to cross gardens and a river, travelling for two and a half hours to avoid fighting before reaching hospital.

Despite the challenges, the MSF-supported Boost hospital remains operational and has seen a marked increase in trauma needs over the last week.

“In just one day we performed 10 surgeries on people injured by violence, which is unheard of for MSF here as we are not Lashkar Gah’s main provider of trauma care,” said Leahy. “Before last week we have been operating on average on two war-wounded people per day.” The main trauma centre in the city is run by another organization, and it too is under immense pressure; the people they cannot admit are sent to MSF for care.

Between 29 and 31 July alone, MSF treated 70 war-wounded patients. And in total from 3 May until 31 July, teams have treated 482 war-wounded, nearly all (92%) for injuries caused by shells and bullets and around a quarter (26%) aged under 18. The patients seen by MSF will be just a fraction of the true number injured by the violence.

The fighting also exacerbates health needs beyond trauma care. Given the lack of well-functioning and affordable medical facilities in Helmand, people rely on the 300-bed Boost hospital, the only referral hospital in the province, for essential neonatal, paediatric, inpatient, intensive care, maternity, malnutrition, and surgical services among others. Since May though, MSF staff have witnessed an alarming increase in the severity of patients’ illnesses when they arrive at the hospital. 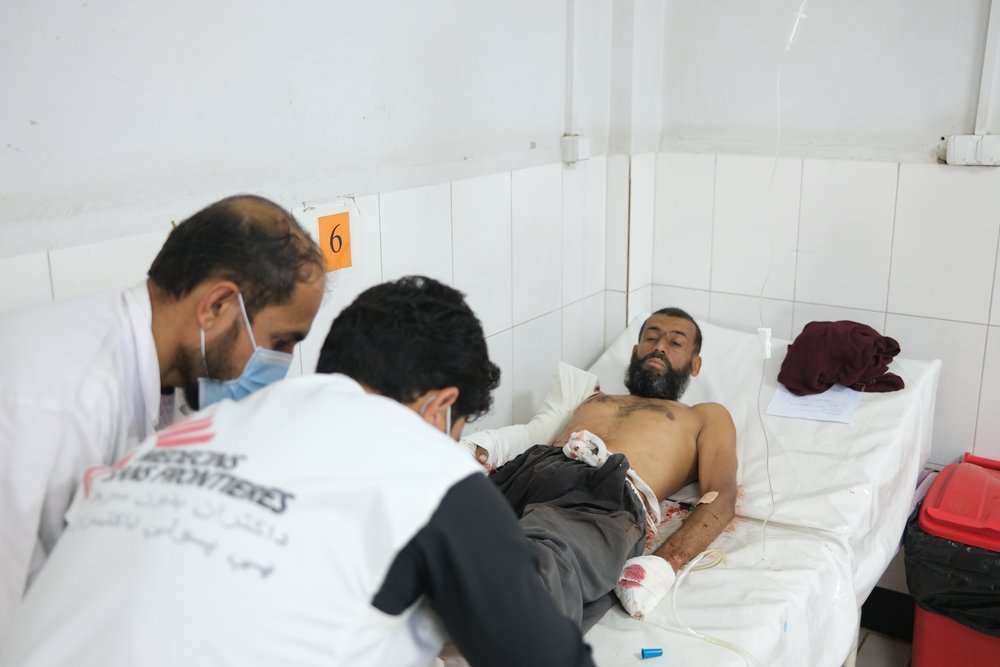 MSF/Tom Casey
Mahmood was shot while he and his family fled their home outside Lashkar Gah. ‘All my family depends on me but now my arm is injured. It’ll be very hard for me to feed my family. I’ve left my home and I cannot go back there – so I am facing many worries and troubles.’ Boost hospital,

People described how, despite needing medical care, they have been forced to wait at home until the fighting subsides or to take dangerous alternate routes. With fighting taking place not far from Boost hospital, and people too afraid to leave their homes due to the violence access to healthcare access is dangerously low

“We have had patients who were caught in the crossfire. On top of something like severe diarrhoea, they have also arrived with a bullet in their shoulder or their leg,” explains a doctor working in the MSF Emergency Room and Intensive Care Unit at Boost hospital. 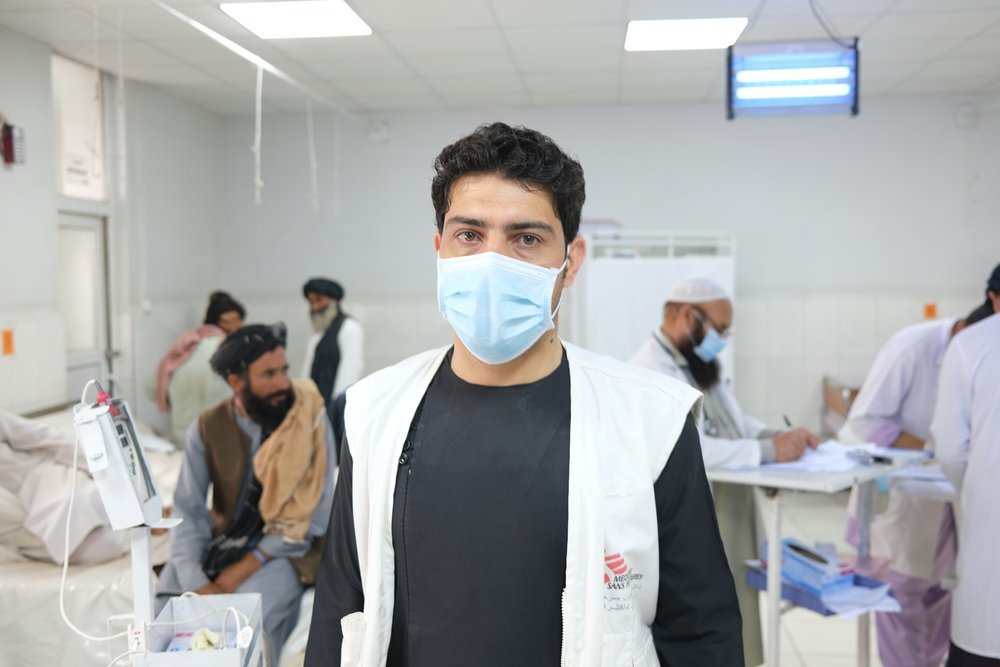 MSF/Tom Casey
"Yesterday we saw a lot of war-wounded, but most of the people we normally treat, such as children under five, are staying at home” MSF Emergency room supervisor Masood Khan after heavy fighting around Lashkar Gah city.

“The conflict leads people to think ten times if they really want to make the journey. They delay until they can’t wait any more, when their relatives haven’t opened their eyes for two or three days, have shallow breathing and are unresponsive. From a medical perspective, that’s almost too late.”

And when people do make it to care, that is just a first step. The effects of the conflict have long-term consequences too, as one patient with bullets wounds to both his arms explained, “All my family depend on me, but I feel like in the future I won’t be able to work because of my injuries. It’ll be very hard for me to feed my family. I’ve left my home and I cannot go back there.”

Even amongst MSF staff, the impact of the fighting is clearly visible. An MSF doctor explains, “Healthcare staff are exhausted. The work itself, seeing all these patients, is hugely difficult. And then on top of that, people have to deal a lot with outside pressures and worries.” MSF continues to provide much-needed healthcare in Boost hospital, and also has projects in four other locations around the country, Herat, Kandahar, Khost and Kunduz.

Help us save lives: please donate >