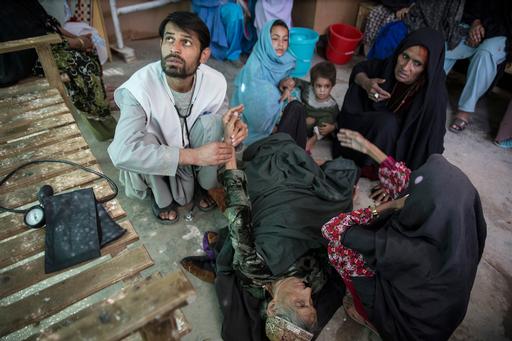 Afghanistan: Withdrawal does not mean an end to war

As the London conference on Afghanistan begins today, we look at the continued instability in the country and it's severe impact on healthcare for many Afghan people. Renzo Fricke, Médecins Sans Frontières/Doctors without Borders (MSF)'s operational coordinator in Afghanistan explains how despite the end of western military intervention in the country, conflict remains a part of life and a serious obstacle to access to medical care for local people.

Post withdrawal Afghanistan is not post-conflict Afghanistan. As the international military intervention draws to a close, hardly a week passes without civilian casualties or severe injuries from improvised explosive devices, gunshots, or landmines.

Some of these injured people find their way to Médecins Sans Frontières/Doctors without Borders (MSF) medical facilities. MSF runs five projects in four provincial capitals: in Kabul we support the Ministry of Public Health (MoPH) in a district hospital in Ahmad Shah Baba in the east of the city, and just last week we opened a new maternity department in Dasht-e-Barchi in the west of the city.

In Helmand’s capital Lashkar Gah, we support the MoPH to run a large provincial hospital. In Kunduz in the north, we run a specialised trauma centre, while in Khost in the east of the country, our teams are running a maternity hospital.

More than 3,000 women deliver in our hospitals each month and there are around 1,000 surgeries. However, we know that there are urgent needs outside the walls of our hospitals, in places where the war is still very present.

Mikhail Galustov
The conflict not only injures and kills people directly, but also indirectly, by impeding their access to healthcare. Many wait until their condition has deteriorated to the point of endangering their health or lives before risking the journey to reach treatment.

Earlier this year, MSF released a report after interviewing more than 800 patients and caretakers to try to better understand their experiences in accessing healthcare.

The report reveals a harsh reality that is very different from the more optimistic rhetoric you may hear about Afghanistan. We found that a majority of people across four different provinces often cannot reach critical medical assistance due to insecurity, distance and cost.

A quarter of people had either experienced violence themselves, or had a family member or friend who had experienced violence in the past year. Over 80 percent of the violence reported was directly related to the ongoing conflict.Even more concerning for us – one in five people had a family member or close friend who had died as a result of their lack of access to healthcare within the last 12 months.

Andrea Bruce/Noor Images
Many pregnant women and their babies do not survive the wait; they either die during the night, during the journey to a medical facility, or shortly after they arrive. Afghanistan is one of the most dangerous places in the world for women to give birth. The need for quality obstetric care is immense. Across MSF’s maternity wards in 2013 – in Kabul, Khost and Helmand – medical staff safely delivered more than 33,500 babies

Beyond the statistics were the horrific stories: an entire family blown up by a landmine as they travelled home from hospital with a new baby; villages caught between rival armed groups; people forced to hold night-long 'death-watches' over a sick or wounded relative as fighting raged outside, in the hope of reaching medical care safely the next day.

Patients trying to reach a doctor or medical facility told us about how they must risk government and opposition checkpoints, landmines, bandits and crossfire, and the majority are too afraid to travel at night, when all these obstacles intensify.

For those who do manage to reach health facilities, care is often too expensive even though it is supposed to be free.

In Khost, in the east of the country, and in the capital, Kabul, roughly half the people surveyed by MSF borrowed money or sold what they could to pay for medicines or doctors' fees during a recent illness.

When we first arrived in Boost Hospital in Helmand province in 2009, we found a hospital that existed on paper only. There were very few patients and a basement full of expensive medical equipment that lay unused.

Five years later, we hospitalise almost 2,000 patients a month and see more than 5,000 people in the emergency room. We see that if you provide free, quality care, people will come.

On the other hand, we face a huge frustration working only in cities. People face many obstacles to reach us and we have little to no access to people living in the districts and villages. This is true of most international organisations and not only for health.

Paula Bronstein/Getty Reportage
A family waiting in the ER of MSF-supported Boost Hospital in Lashkar Gah. The youngest child is suffering from a high fever. Last year in 2013, 66 000 patients were treated in the Emergency Room. MSF is now working on expanding the ER to extend its capacity.

There is very little visibility on what is happening in the country outside the main cities. It’s really a black hole of information. We have to wonder if basic medical services even exist in some areas.

Although our survey was conducted last year, we have absolutely no reason to believe the situation has improved since then. In fact, this summer, or “fighting season” our medical teams in both Helmand and Kunduz – which had been considered one of the more stable provinces over the past few years – treated numerous people with complex and serious injuries caused by the escalation in fighting.

A lot of the money that has poured into Afghanistan over the last 13 years has been used to develop so-called ‘quick impact’ projects aimed at winning the support of the Afghan population and furthering military objectives.

Meanwhile, areas of no strategic value did not benefit from the same investment, and consistently appear at the bottom of the priority list despite prevalent needs.

When humanitarian aid is politically driven, it drifts dangerously far from meeting real needs on the ground. While rebuilding states, reinforcing capacities and creating systems is important work, it cannot replace the principled approach to humanitarian aid in a country that’s far from stable.

The war may be almost over for international troops, but it’s certainly not for Afghans.