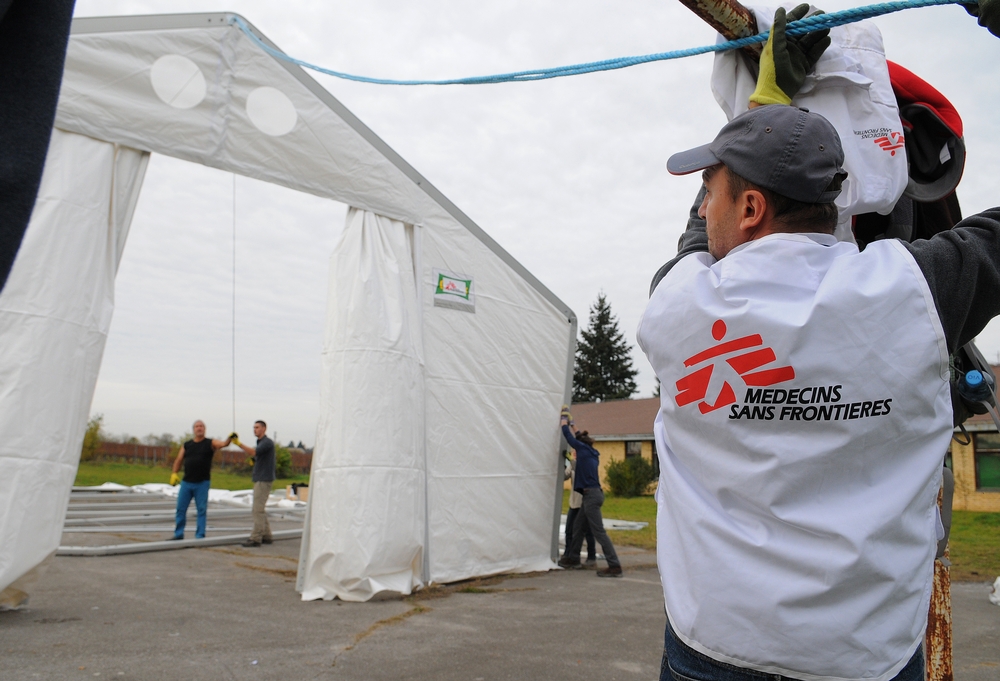 New measures by a number of Balkan states to allow certain nationalities only to cross into their territories are leaving hundreds of people in transit stranded at border crossings, uncertain of their rights and without sufficient aid.

The governments of Slovenia, Croatia, Serbia and the Former Yugoslav Republic of Macedonia (FYROM) are limiting entry to people from the Middle East and Afghanistan.

At the same time, restrictions imposed by the authorities are limiting the capacity of aid agencies to provide shelter and support to those who find themselves stranded.

“Evan before this arbitrary triage was put in place, the situation for people in transit in the Balkans was already desperate,” says Stefano Argenziano, MSF’s operations coordinator on migration.

“For months we have been calling on authorities for concrete measures to grant safe and legal passage for those in need, but there has been little response.”

MSF is concerned about the medical and humanitarian consequences of these new border policies, and warns that they are likely to force people into taking more dangerous routes and into the hands of people smugglers.

MSF calls on governments in Europe and the western Balkans to comply with their protection obligations and to allow humanitarian organisations to provide assistance to those in need. 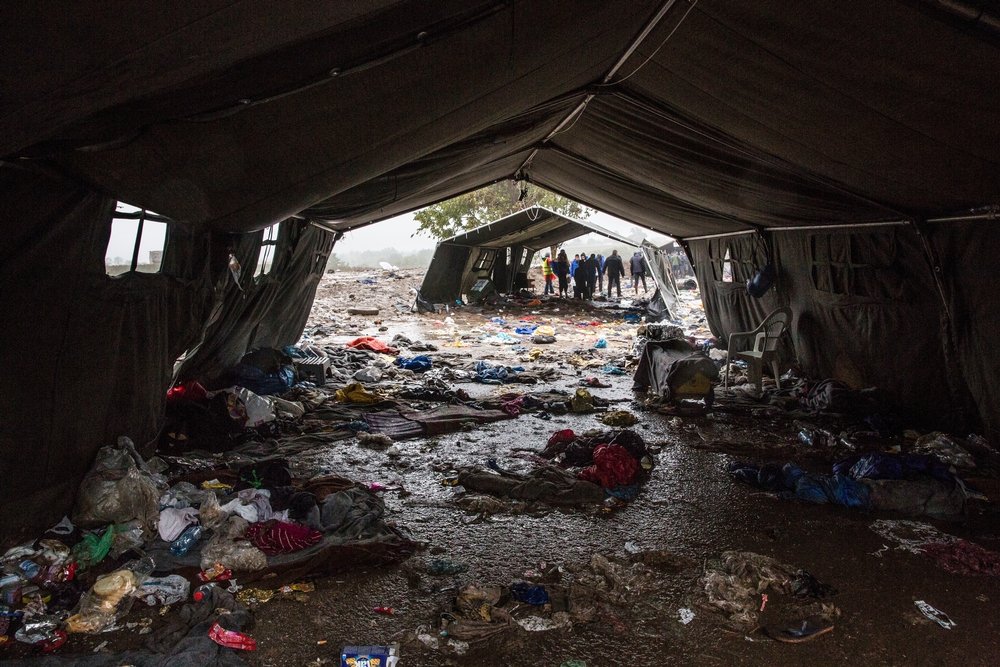 Anna Surinyach/MSF
Around 3,000 refugees were stranded in the border between Serbia and Croatia on October 19, waiting in a transit area with poor living conditions and under the rain. They could finally proceed to Croatia after the police opened the border.

In the transit camp of Idomeni, in northern Greece, the situation is particularly tense, with some 1,500 people – almost all from nationalities barred from crossing into FYROM – stranded at the border.

They have no information on what options are available to them, and their only food is being provided by volunteer organisations.

With more busloads of people arriving each day, these numbers are likely to increase significantly in coming days. MSF has set up 12 large tents which are providing shelter to some 900 people and is preparing to set up a further eight tents.

However, this scaling up of humanitarian assistance is currently being challenged by Greek national and local authorities. 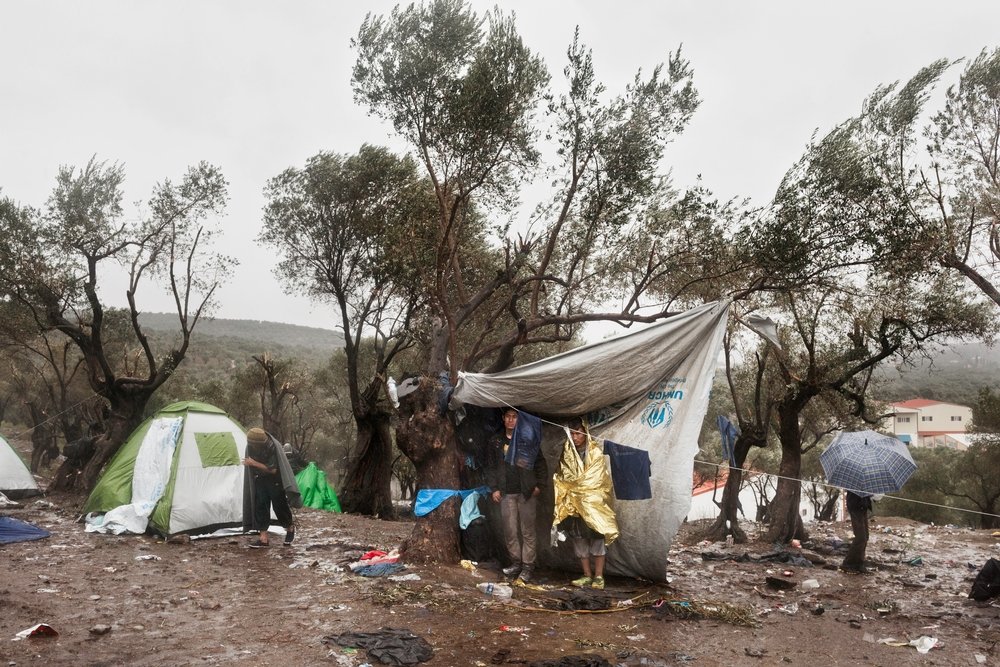 MSF’s medical teams in Idomeni are working seven days a week and have already observed increasing health needs amongst the stranded people.

In particular, our psychologists have noted a significant increase in the number of people experiencing panic attacks and attempting self-harm, which they say is a direct consequence of the desperate conditions at the border and people’s uncertainty about their future.

“Most people here have undertaken long and arduous journeys to reach this point, often risking their lives and losing everything they had on the way,” says Antonis Rigas, MSF field coordinator in Idomeni.

“It is imperative that the Greek authorities do not cause further harm to these people by limiting the capacity of humanitarian organisations to respond and by preventing them from attending to people’s most basic humanitarian needs." 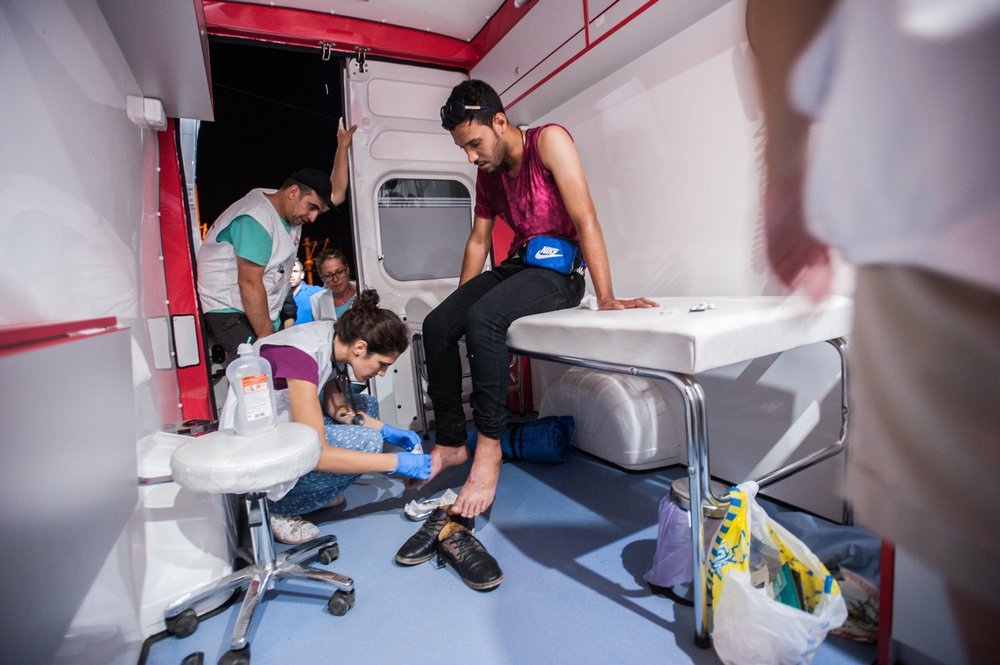 Borja Ruiz Rodriguez/MSF
MSF Doctor, Stavroula Kostaki, treats a patient whose feet have been cut and bruised due to walking long distances.

MSF is managing water and sanitation in the camp and working with other organisations to provide people in transit with hot meals and other basic assistance.

MSF teams are also working on the Greek islands of Lesbos, Samos, Leros, Kos, Kalymnos and Agathonisi, providing medical care, basic relief items and shelter for the thousands of refugees and migrants crossing the Aegean Sea. 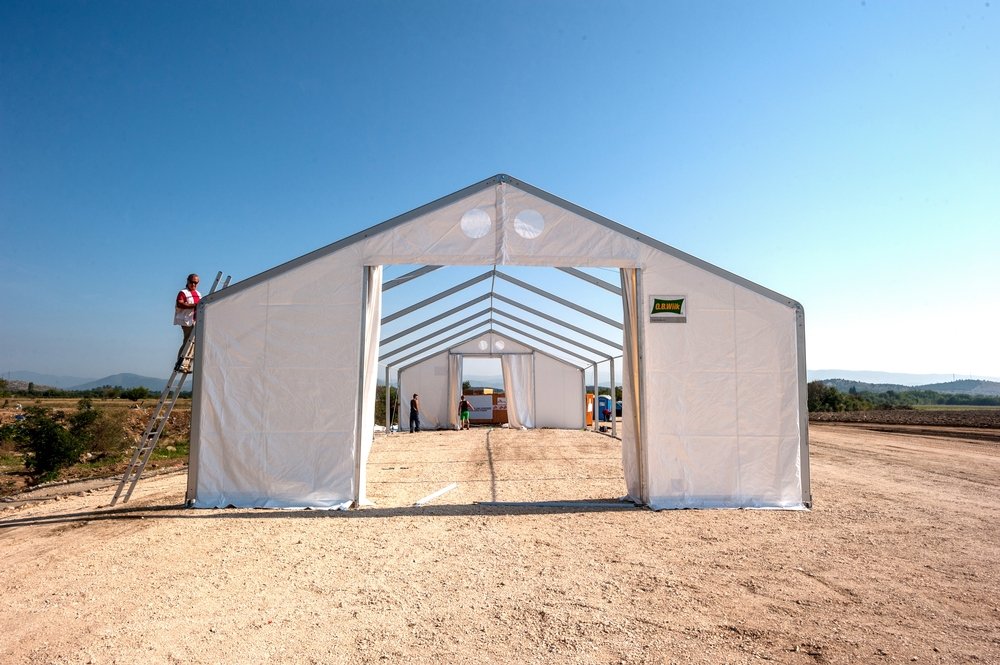 Borja Ruiz Rodriguez/MSF
MSF Logisticians Anibal Ordenes and Celine Van Lamsweerde build the first tent in a camp planned together by MSF and UNHCR in Idomeni. The camp will provide shelter for 1,100 people once it is complete the camp will be made up of seven 240 meter square tents.

Serbia: Forced into hiding and the hands of smugglers

In Presevo, 10 km north of Serbia’s border with FYROM, dozens of people have been prevented from entering the registration centre because of their nationality, and are being forced to spend nights outside in low temperatures.

They include a pregnant woman from Afghanistan without the right papers.

In the town of Sid, near Serbia’s border with Croatia, some 350 people are currently stranded. Some say they crossed the border into Croatia but were forced back by police.

Several showed signs of physical abuse and reported to the MSF team that they had been beaten, kicked and threatened by Croatian border police. 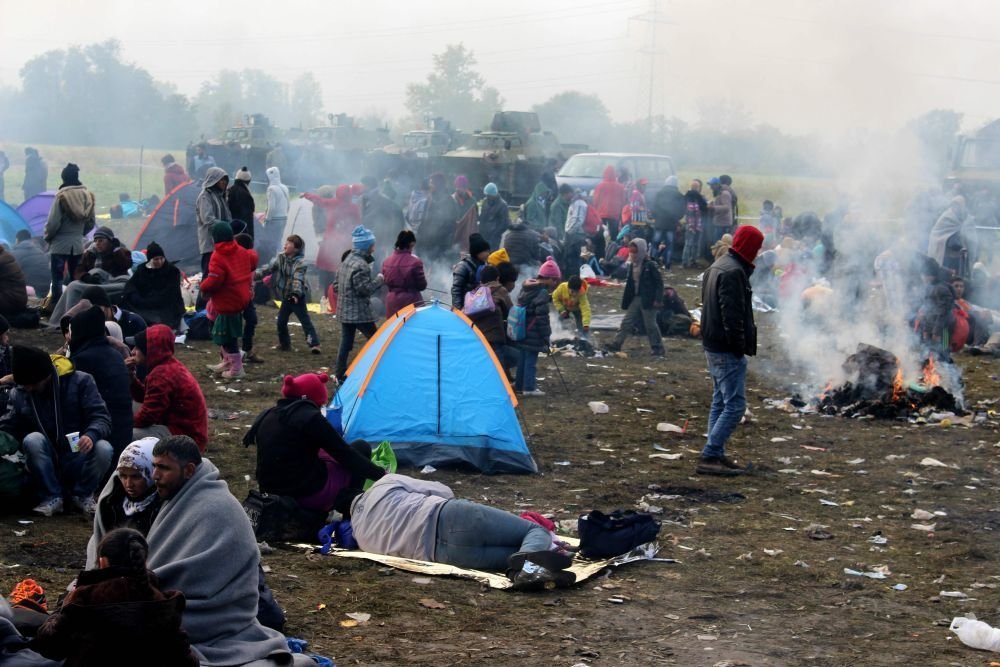 Hanna Spegel/MSF
Thousands of people are entering Slovenia daily on different spots along the border to Croatia. While some of them are gathering in overcrowded transit centres, others have to spend the night outdoors on the fields without any assistance.

“These new measures of segregation by nationality are likely to have dramatic effects, says Stephane Moissaing, MSF’s head of mission in Serbia.

“We fear that some of the people in transit will be forced to go into hiding again, where they will have no access to any humanitarian assistance."

"This policy forces people into taking more dangerous routes – effectively it puts them into the hands of smugglers and will subject them to further violence and extortion.” 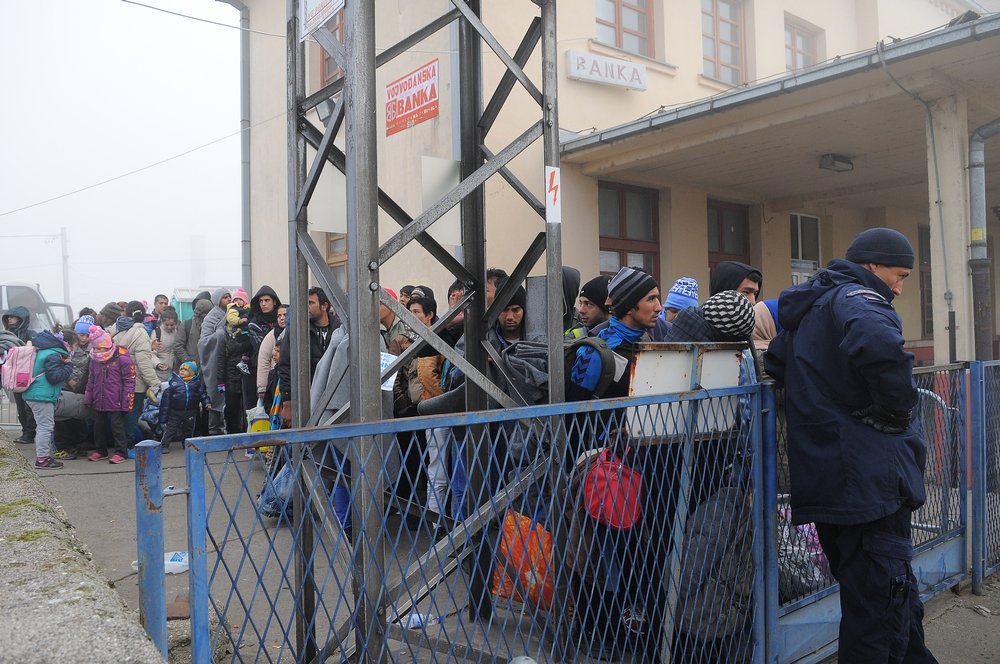 Florian Lems/MSF
Refugees and migrants wait to board a train to Croatia at the Serbian border in Sid. Thousands of people pass through Serbia each day on their way from Greece to other European countries.

MSF teams are providing an average of 1,200 medical consultations per week, with a total of 28,232 consultations since December 2014.

In Presevo, MSF has set up several tents for the use of the most vulnerable people, and also provides transport for families with small children, the elderly and disabled people from the border with FYROM.

At the Croatian border, MSF is currently setting up a number of tents that are suitable for winter temperatures. 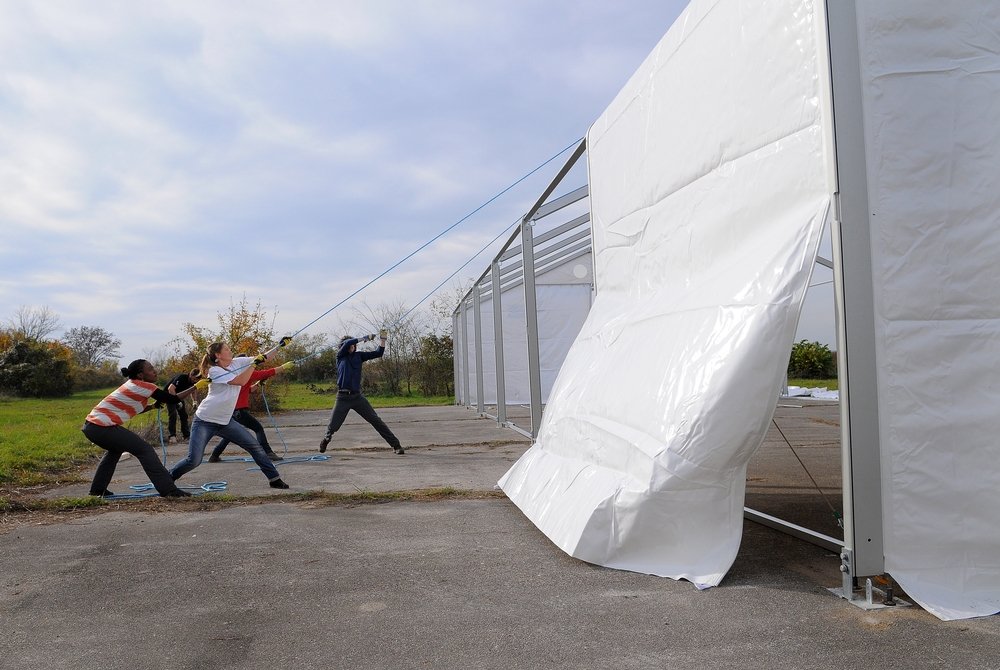 Over recent months, MSF has repeatedly denounced the lack of coordination of the humanitarian response for people in transit through the Balkans, which remains unable to cover people’s basic need for shelter.

“Authorising transit across the Balkans has so far been the only realistic response to the failure of the European asylum system and to Greece's inability to offer people assistance and protection,” says Aurelie Ponthieu, MSF’s humanitarian adviser on displacement.

“This sudden policy change – implemented without any consideration for people's needs for protection, medical care or shelter – shows once again the failure of Europe and the western Balkan states to provide coherent and human solutions to the needs of desperate people in search of protection.”

Read about the work of MSF in the European refugee crisis