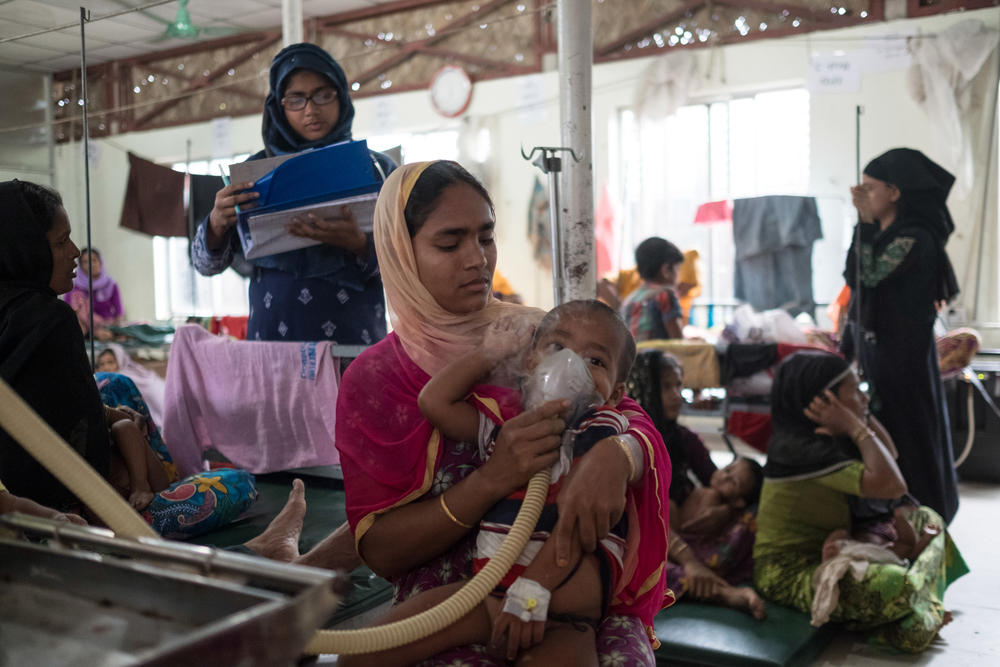 Following a wave of targeted violence against Rohingyas more than 422,000 people have fled to Bangladesh from Rakhine State in Myanmar within a three week period. The most recent influx of Rohingya refugees has added to the hundreds of thousands of Rohingyas who fled across the border during episodes of violence in previous years. 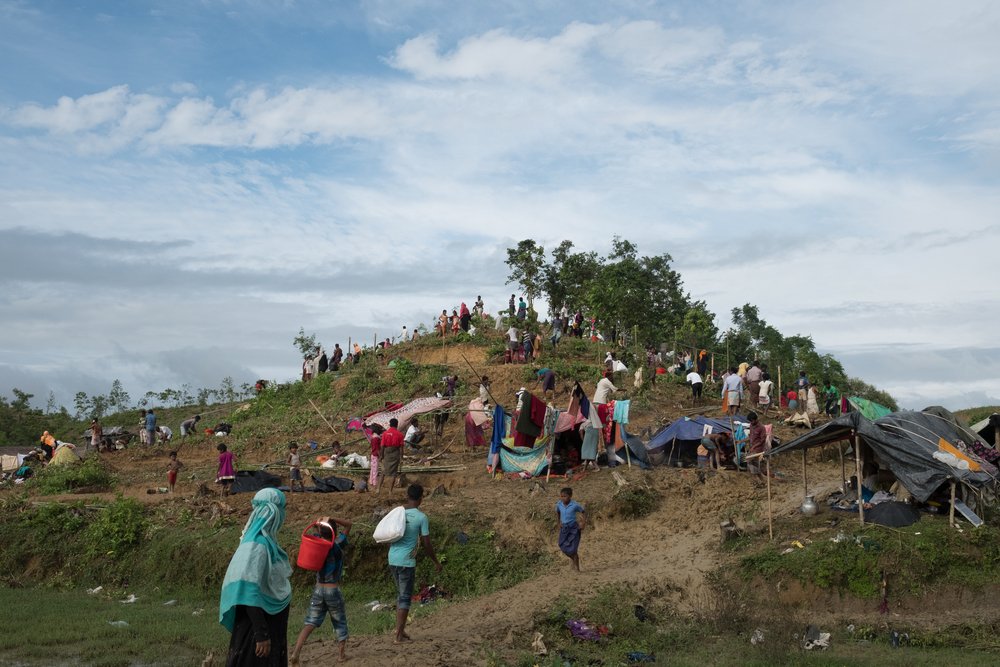 Antonio Faccilongo
More than 422,000 Rohingya have fled to Bangladesh from Rakhine State in Myanmar following an escalation in violence on 25 August.

Most of the newly arrived refugees have moved into makeshift settlements without adequate access to shelter, food, clean water, or latrines. Two of the main pre-existing settlements in Kutupalong and Balukhali have effectively merged into one densely populated mega-settlement of nearly 500,000 refugees, making it one of the largest refugee concentrations in the world.

“These settlements are essentially rural slums that have been built on the side of the only two-lane road that runs through this part of the district,” says Kate White, MSF’s emergency medical coordinator.

“There are no roads in or out of the settlement, making aid delivery very difficult. The terrain is hilly and prone to landslides, and there is a complete absence of latrines. When you walk through the settlement, you have to wade through streams of dirty water and human faeces.”

At MSF’s medical facility in Kutupalong, 487 patients were treated for diarrhoeal diseases between 6 and 17 September. “We are receiving adults every day on the cusp of dying from dehydration,” says White. “That’s very rare among adults, and signals that a public health emergency could be just around the corner.” 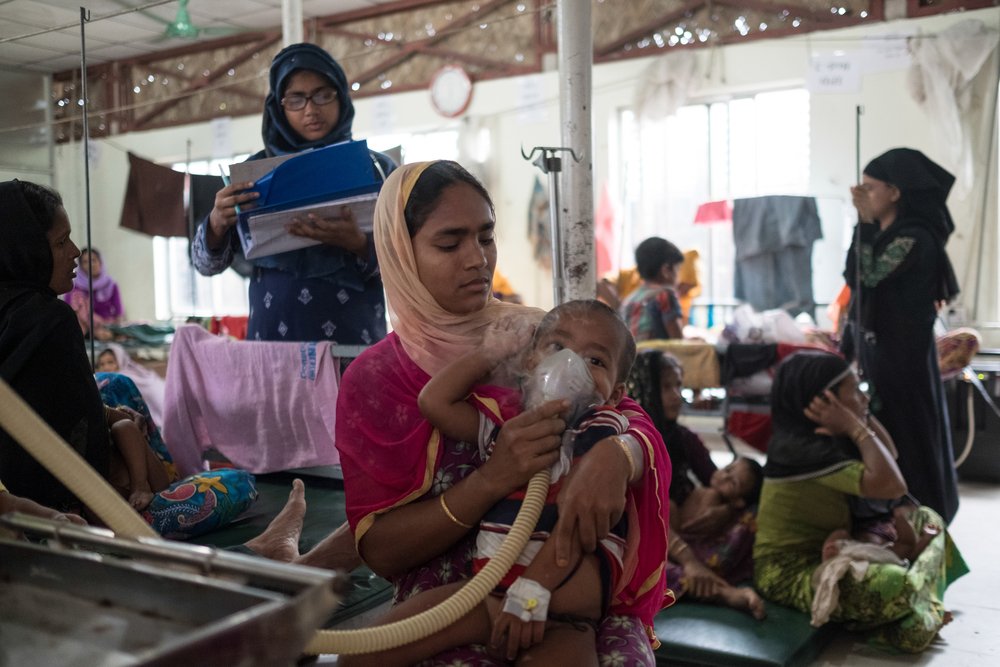 Antonio Faccilongo
A massive scale-up of humanitarian assistance in Bangladesh is needed to aid the Rohingya refugees and avert a wider public health disaster.

Food security in and around the settlements is incredibly fragile: newly arrived refugees are completely reliant on humanitarian aid, prices in the market are skyrocketing and the lack of roads is compromising access to the most vulnerable populations.

“With very little money and chaotic, congested and insufficient food distributions, many Rohingya are only eating one meal of plain rice per day,” says White. “Some refugees told us that after days without food all they had eaten was one bowl of rice they received from a Bangladeshi restaurant owner, shared among a family of six.” 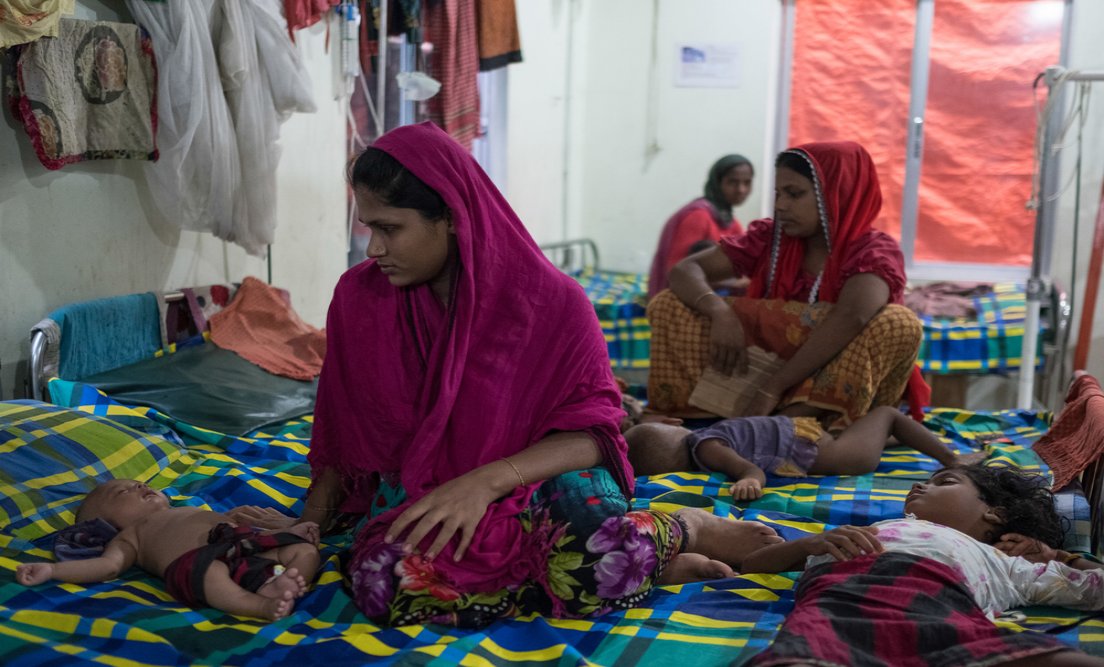 Antonio Faccilongo
The most recent wave of Rohingya refugees has added to the hundreds of thousands of Rohingya who fled across the border in previous years.

There is a very high risk of an infectious disease outbreak in the area given the huge and rapid increase in the population, as well as the known low vaccination coverage among the Rohingya community in Myanmar.

Comprehensive vaccination campaigns for measles and cholera need to be launched immediately to reduce the outbreak risk and protect the Rohingya and Bangladeshi populations. 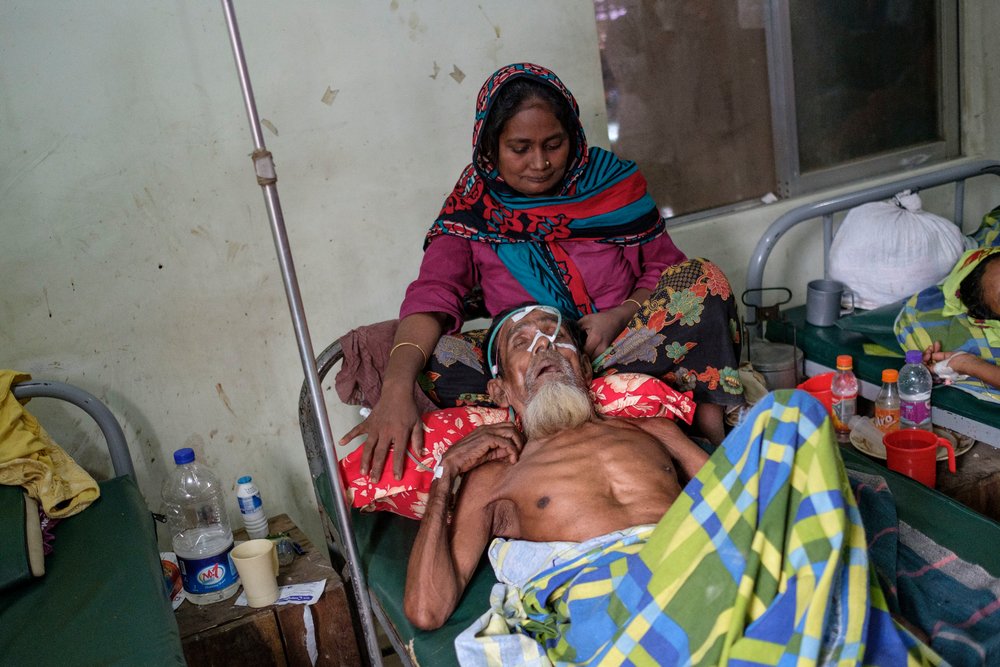 Antonio Faccilongo
A woman looks over her sick relative at MSF's medical facility in Kutupalong.

In anticipation, MSF has prepared an isolation unit in the Kutupalong medical facility to rapidly contain any suspected or identified cholera or measles cases.

“The situation in the camps is so incredibly fragile, especially with regard to shelter, food and water and sanitation, that one small event could lead to an outbreak that may be the tipping point between a crisis and a catastrophe,” says Robert Onus, MSF Emergency Coordinator.

“Hundreds of thousands of refugees are living in an extremely precarious situation, and all the preconditions for a public health disaster are there,” adds Onus. “We most likely still haven’t seen the full impact of this crisis in terms of health. There is an acute need for a massive humanitarian intervention focusing on food, clean water, shelter, and sanitation, and a solution is needed to reduce the size of these massive, congested camps.”

our work in Bangladesh >