Faruk* is a Rohingya refugee, living in a camp in Cox’s Bazar, Bangladesh. “No one wants to be a refugee; the life we have here is not easy,” he says. “We live in an open prison. Life for a refugee is hellish and every day is the same. I can’t travel outside the area of the camps as we need special authorisation to leave, and it is only granted under special circumstances such as for medical care or emergencies.” 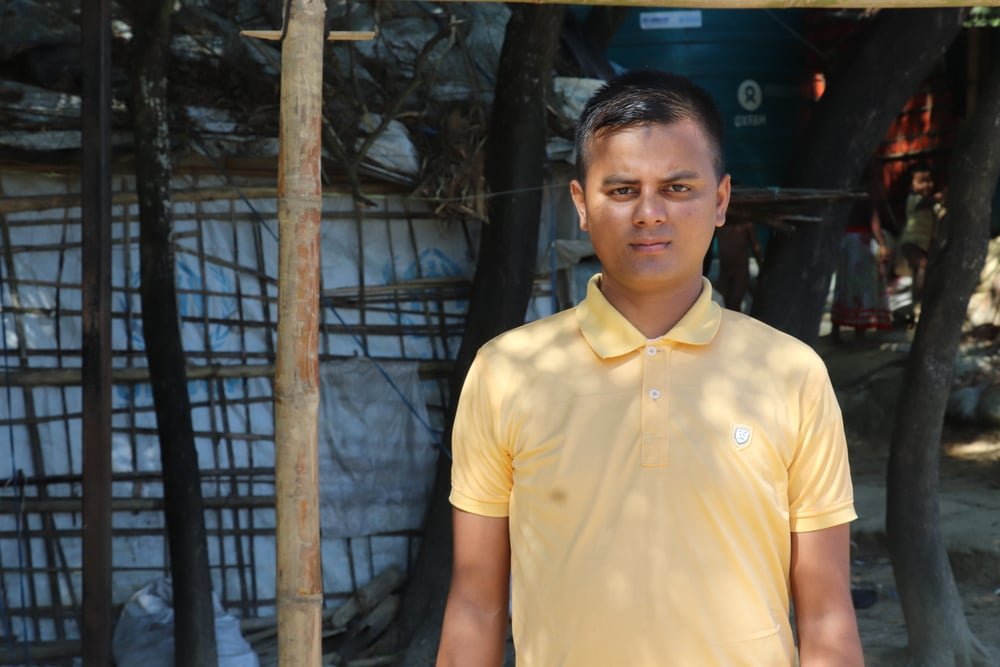 For Rohingya refugees in Cox’s Bazar, living in overcrowded camps for the past three years, with no hope for the future, and no legal status, was already affecting their mental health. The COVID-19 pandemic added even more restrictions, and stress, to their life.

Looking beyond the pandemic, life in the camps shows no signs of improving, with efforts to relocate some refugees to address the overcrowding, adding to the uneasiness.

Rumours of the relocations to Bhasan Char, a mass of sediment which has formed an ‘island’ 30 kilometres from the mainland, date back to as far as 2015, but turned into a reality in December 2020. 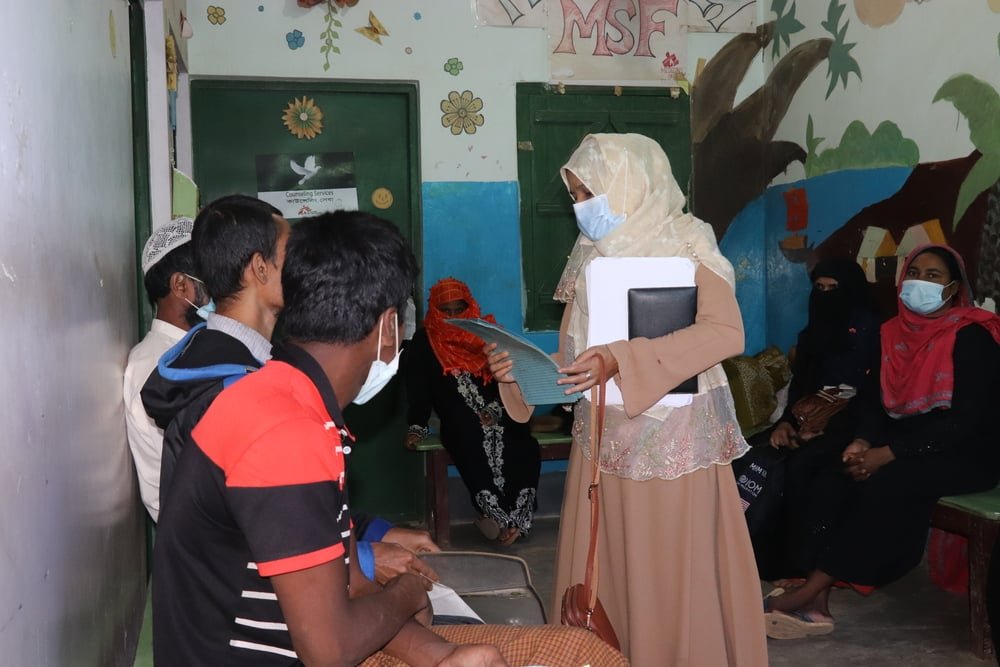 MSF/Farah Tanjee
MSF’s Mental Health Supervisor is checking on patients who are visiting our Kutupalong facility to have mental health support.

Prior to that, in May of the same year, around 300 Rohingya refugees who had been rescued at sea were transferred to the island for quarantine as a result of the COVID-19 pandemic. They never left and little is known about the conditions they have faced while detained.

In early December, they were joined by more than 1,600 more people from the camps in Cox’s Bazar. To date, it’s estimated over 3,000 people have now been relocated to Bhasan Char.

It's likely that more Rohingya will face relocation soon; authorities claim the island has an estimated capacity to house 100,000 people.

Independent humanitarian organisations, including the UN, have yet to gain access to the site, adding fuel to the growing concerns about the conditions there. 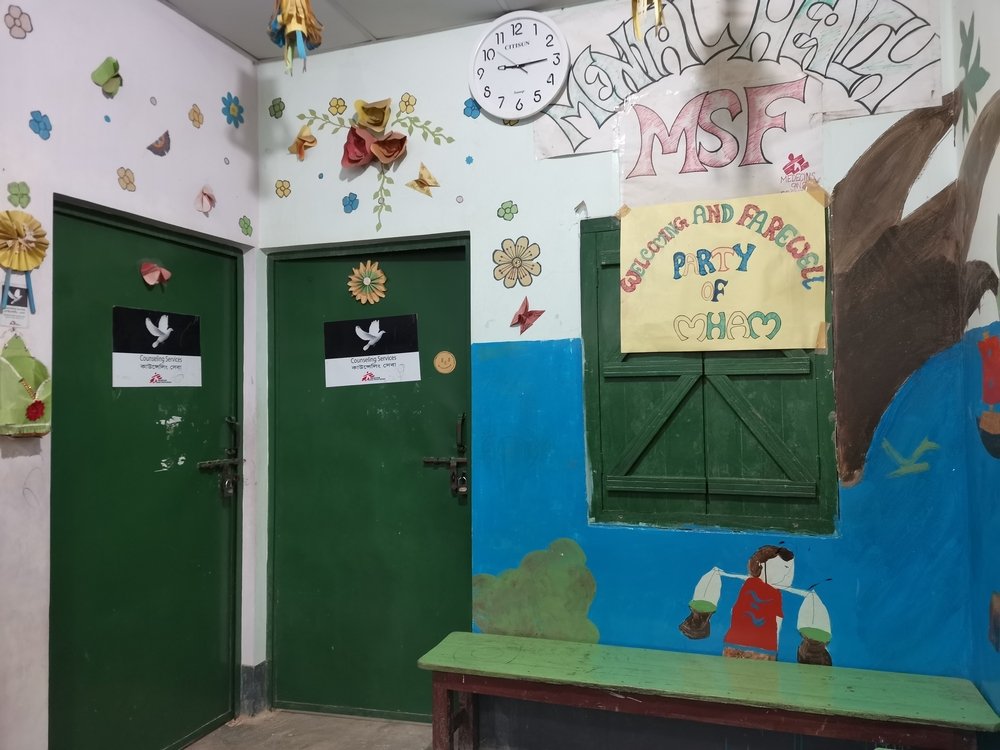 More recently, in the camp, fire broke out at Nayapara Registered Refugee camp destroying around 550 shelters where news reports estimated that around 3500 Refugees were staying. Although there were no casualties, and only a few people with minor injuries, for those living at the site, the disruption to daily life has been huge.

Prior to this, services in the camps including medical care, and food and water distributions, provided primarily by humanitarian organisations, was reduced by 80 per cent to help reduce movements to counter the spread of COVID-19.

The mounting impact of many months of this reduced humanitarian support, especially on a community that is increasingly contained, restricted and put in a position where they are dependent on humanitarian assistance, has meant the daily struggle to meet even basic needs has heightened tensions.

All these mounting factors have added to the mental health stress faced by Rohingya refugees in Bangladesh, make their lives tougher, and this strain has more recently spilled into violence.

Asiya looks nervous when she arrives at MSF’s Kutupalong hospital. She needs to talk to someone about what she experienced in October during a 12-day clash between two Rohingya groups in the camps.

With a shaky voice she describes the violence she witnessed. “I was hiding in the kitchen with my children so that no one could attack us,” she says.

“When the violence broke out in the camps there were no men at home. We could hear the gunshots and we stayed silent, closing all the doors. We were frightened and shocked.” 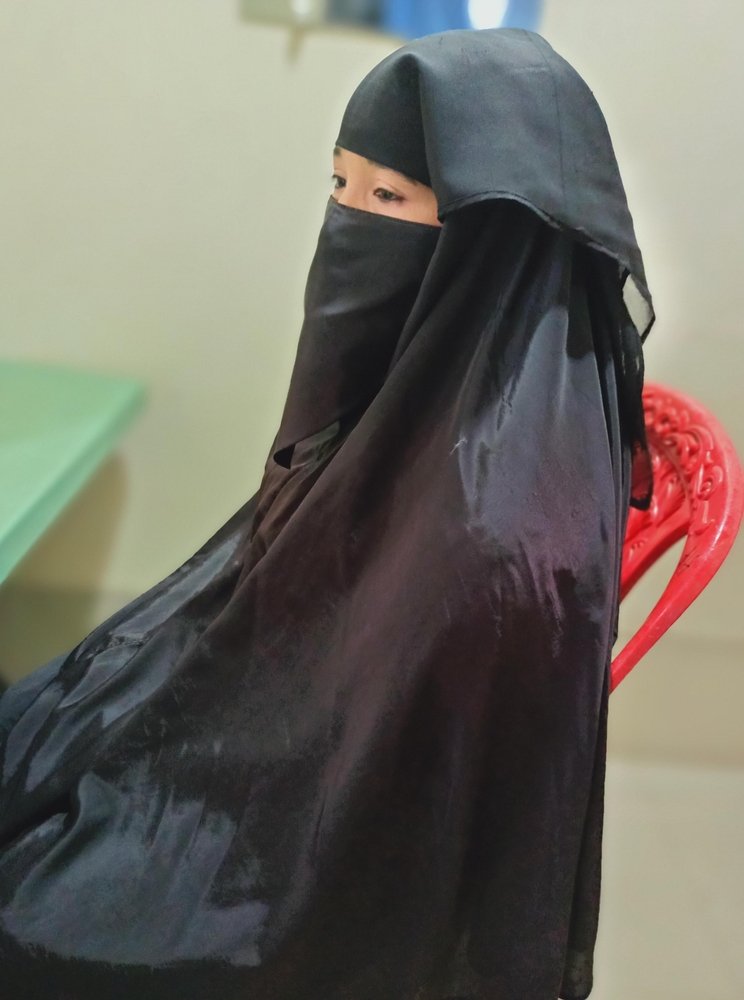 After the violence, many refugees and their relatives left their shelters and moved to other parts of the camp which were unaffected by the clashes. Our field team spoke with traumatised people who were even afraid of visiting hospitals, health posts or clinics, for basic health care.

Hope amid the gloom

Médecins Sans Frontières/Doctors Without Borders (MSF) Mental Health Activity Manager Kathy Lostos says despite the recent escalations, the situation is not hopeless, there are steps that can be taken to improve the situation for those living in the camps, and in turn, their mental health.

“The best thing to improve mental health outcomes is to restore a sense of safety,” she says. “Having some degree of control or autonomy over one's future is a determinant of creating a sense of safety".

"This includes things like including communities in decision-making processes or creating a sense of autonomy and control over one's future. [This] serves to mitigate the long-term effects of trauma.” 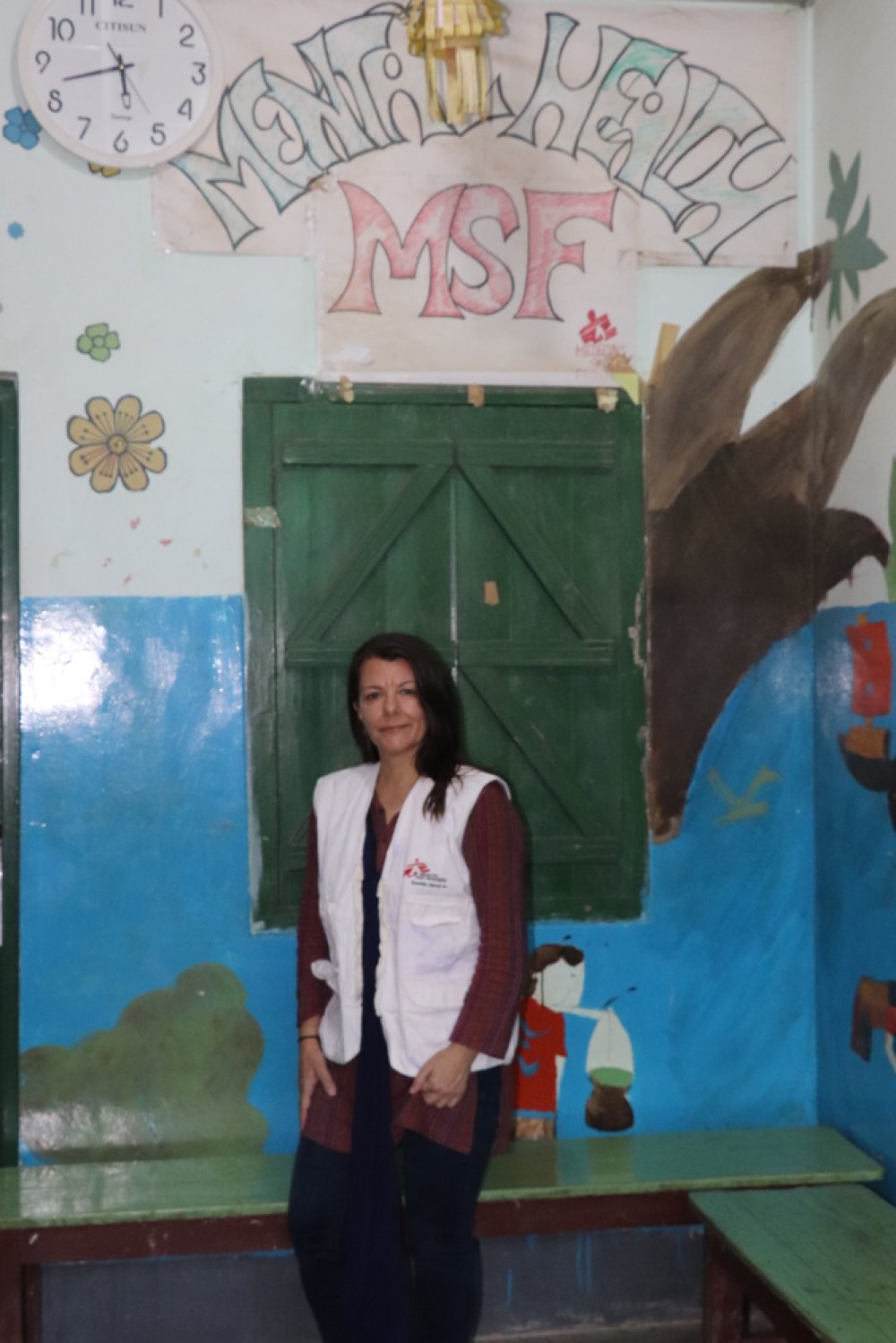 “When a group's future is uncertain and when a population is not integrated into a society, this creates a feeling of lack of safety,” says Lostos.

“Feeling that your life is under threat can lead to helplessness, believing that ‘nothing that I do will matter,’ and this can have a huge impact on people’s mental wellbeing.”

Laiju*, a volunteer in Kutupalong hospital, faced the violence while staying in a school with her family and parents. “We left our homes and took shelter in a school premises inside the camp, and we were out of our home for almost 20 days,” she says.

We are just trapped here, the restrictions of movement and  the impossibility of getting jobs are making our lives much tougher.

While speaking, Laiju holds paper in her hands and rolls it over again and again. Our mental health staff could see she was making little eye contact, and possibly trying to control her emotions by keeping herself busy.

“I am tense and truly frustrated, thinking about the future,” she says.

“I started thinking, in a way, that we don’t have any future or hopes. We are just trapped here, and restrictions of movement, and the impossibility of getting jobs are making our life much tougher.” 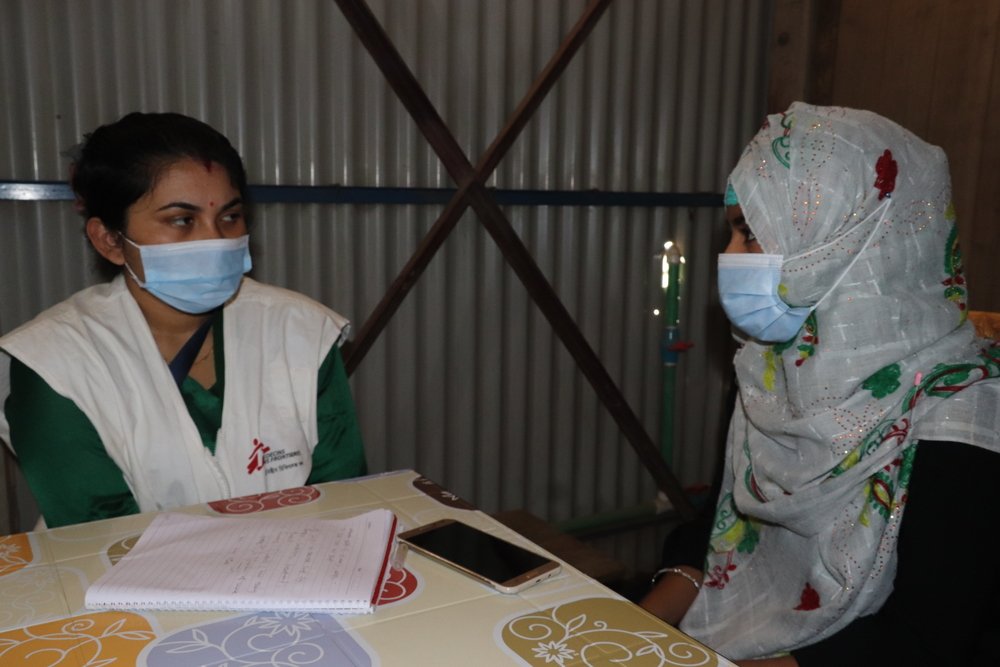 But despite the many mounting challenges, there is still hope from within the camps.

“I have many dreams,” says Faruk. “I want to visit and explore other places. I want to go to my home in Arakan [Rakhine state, Myanmar], so long as we get justice and rights.”

*Names of patients have been changed at their request