Bangladesh: “This ward should not exist”

In a pink room decorated with white flowers at Médecins Sans Frontières’ (MSF) Kutupalong field hospital in Bangladesh, a woman lies curled around her sleeping child. Next to her, a young mother cradles a baby whilst her other daughter plays with a balloon. Rows of beds stretch in either direction, mothers, and children sitting or lying quietly in everyone. It could be a peaceful scene, except for the intravenous lines snaking up from each child’s arm to a saline drip.

This is an isolation ward and all these children are critically ill with measles. Many have additional complications, such as pneumonia and malnutrition. The nurse checks vital signs every hour. For a ward full of young children, it is eerily silent – most of them are semi-conscious. 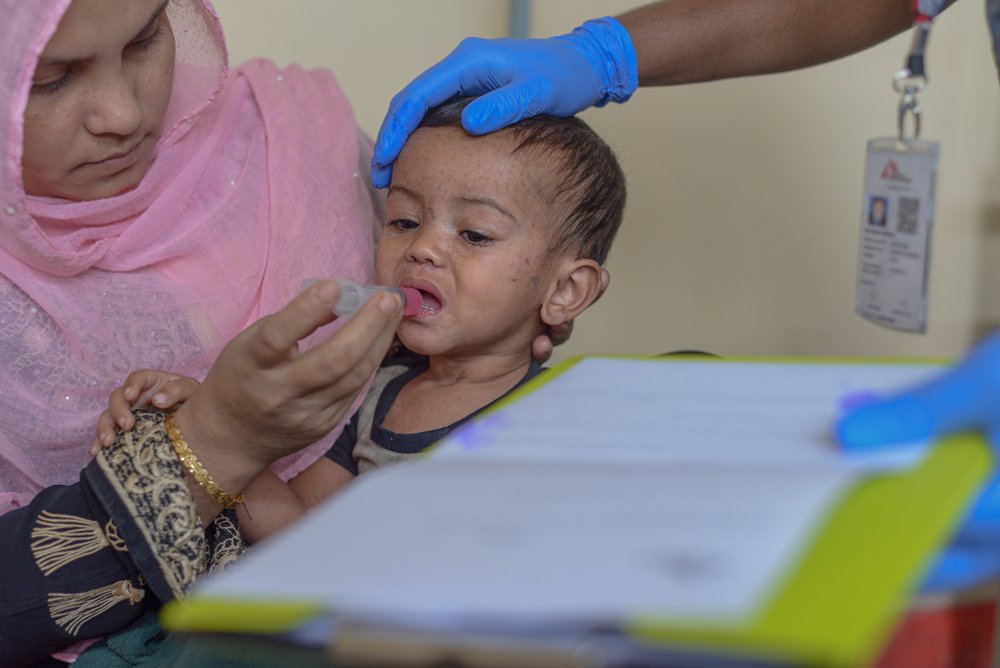 Tariq Adnan/MSF
Rohingya refugee Rashida feeds her two-year old son, who has been suffering from measles for the last week.

Neither should this ward exist. It is usually an intensive feeding unit for severely malnourished children. But four weeks ago, to cope with the growing number of critical measles cases needing inpatient intensive care, staff had to transform it into an emergency isolation ward.

In the first four weeks of the year, MSF saw a 40 percent jump in measles cases treated in our facilities in the refugee camps. In January alone, around 120 patients were admitted to MSF isolation wards, with more than 900 people treated as outpatients.

“Since November the cases have been increasing and increasing,” explains Mohammad Younus Ali, an MSF nurse in the Kutupalong Hospital. “Now it’s overflowing”.

A highly contagious airborne virus, measles is particularly dangerous for children, putting them at risk for severe pneumonia, encephalitis, and death. Over 80 percent of MSF’s current measles patients are under the age of five. Thirteen have died from measles in MSF clinics since the outbreak started.

Nurata’s nine-month-old daughter Nur Salima first developed a fever six days ago and received treatment in Kutupalong hospital. Nurse Younus explains that baby Nur Salima was barely conscious when she arrived in the emergency room. “I saw [Nurata’s] face at the day of admission; there was lots of fear in her face.” 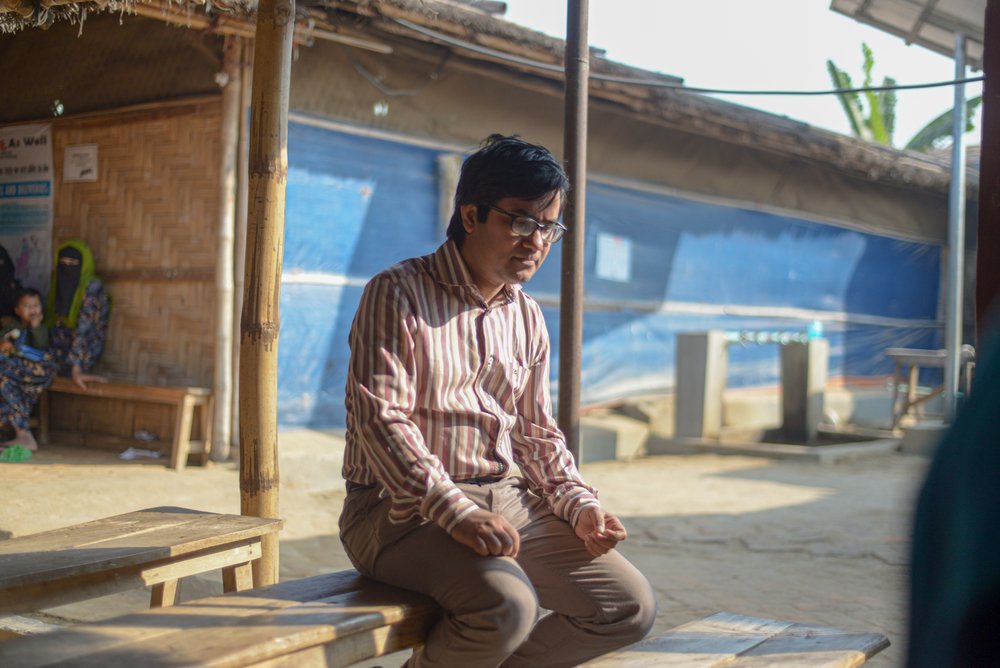 Seven kilometers away, in the southern part of the refugee camp, MSF is receiving patients in Jamtoli primary health centre. Like others, this clinic is also overwhelmed. As a primary health centre the isolation ward has five beds, which is normally sufficient – except now the clinic has been receiving ten to fifteen patients daily, according to Dr. Nowshad.

In Jamtoli’s isolation ward, Romida and her husband Abu Sufian watch over their ten-month-old son Forkan. The couple got married in the refugee camp, and Forkan is their first child. His face is covered with the telltale red measles rash, his eyes swollen and gummed shut. Listless and in pain, he writhes on his mother’s lap as she rocks him gently. The concern is etched on the young parents’ faces. 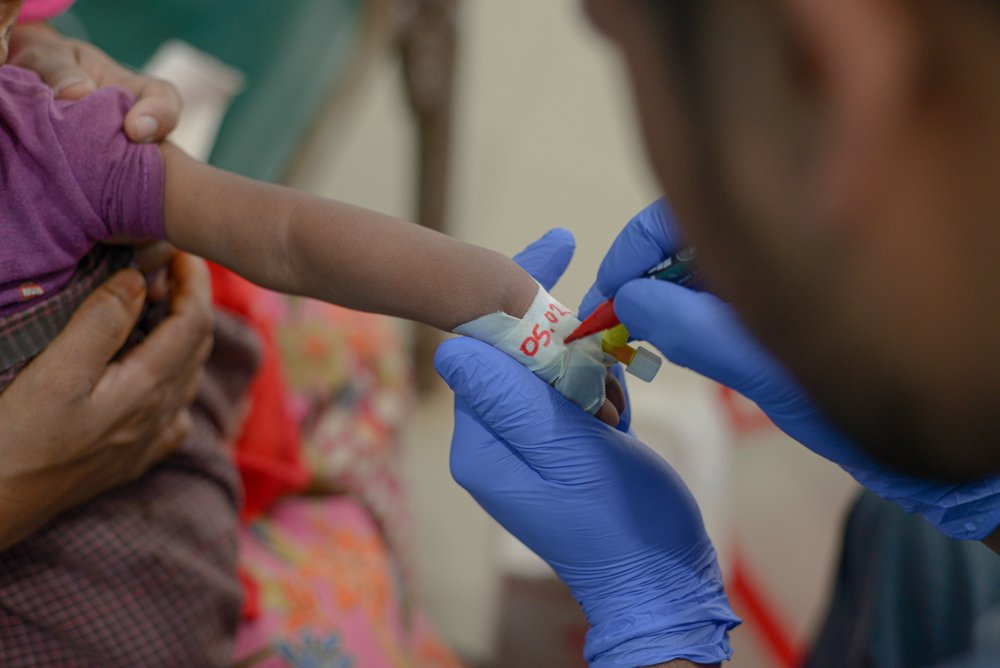 Tariq Adnan/MSF
10 month-old baby Atiullah was born in the refugee camp in Cox’s Bazar, and is his parents’ only son.

When her son became sick, Romida was so scared she stopped eating. Suffering from a high fever, diarrhea and experiencing difficulty breathing, Forkan had also refused to drink. Now, a nurse hands Romida a syringe filled with an oral rehydration solution, which she gently tries to drip into her son’s mouth. Measles can cause oral infections, which makes eating and drinking exceptionally painful. Despite her encouragement, little Forkan will not drink.

The Rohingya have suffered decades of persecution and restrictions on healthcare in Myanmar; as a result, most people never received routine immunisation for infectious diseases. The lack of quality routine immunisation for Rohingya refugees in the camps means that babies like Forkan who are born here are at risk of catching preventable infectious diseases like measles

After five days in the isolation ward, Nurata’s daughter Nur Salima improved and was finally strong enough to be discharged. Having nursed her back to health, Nurse Younus is delighted. The feeling of watching a patient survive “is indescribable” he says, overjoyed.

Forkan, however, is still fighting. Unable to drink any fluids, he was transferred to MSF’s Goyalmara hospital for intensive care. MSF’s team will do everything they can to save his life.

oUR WORK IN BANGLADESH >