“To be honest with you, the past week has been catastrophic for us medical staff”

Below, a female doctor who manages a field hospital in East Ghouta, and who has been supported by Médecins Sans Frontières (MSF) since 2013, recorded her thoughts about the current nightmare situation she and her colleagues are facing. She asked to remain anonymous for her security, and for the precise location of her facility to not be disclosed. This testimony was recorded in the night of Sunday 25 February 2018.

We receive war trauma related wounded almost every day. Wounded are from all classes of society; the vast majority of the wounded we receive are civilians: children, women and men. Our main work is to rescue these wounded, to the best of our capacity because as I said we have been under siege for more than five years and our capacities are very limited. In spite of that, we are, in my view, doing a good job saving a lot of lives within our capacities. The main challenge we are facing is the constant bombing and constant strikes; it increases the number of wounded which exhausts the medical staff, drains medical material available and reduces the level of drugs available. It’s difficult to move, ambulances' movements are hampered, even people’s movement becomes very difficult. In addition, the siege imposed restricts the entry of medical items into East Ghouta. Several items are missing in our stocks and we cannot provide them. These are two of the main challenges we are facing as medical staff.

Influxes of wounded were high, numbers of dead were high, the majority of the war related injuries were severe: amputations, head injuries, poly-trauma. We faced a lot of difficulties in moving because of the constant strikes, there was no pause in the bombing that would allow us to refer patients and our rescue teams had difficulties in rescuing people from under the rubble and to take them to the hospital. 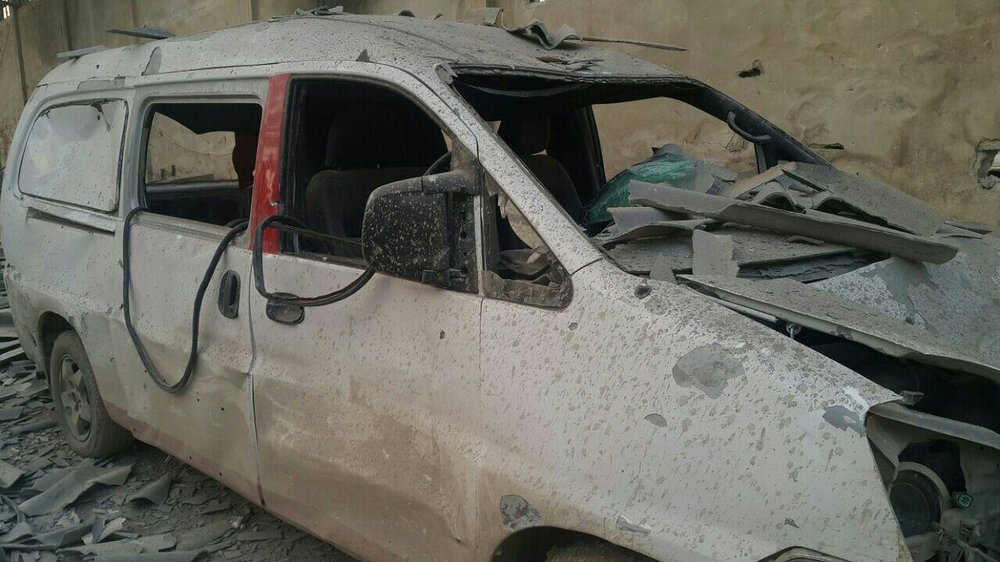 We face difficulties in transferring patients to the ICU or other rarely available specialties like neurologists and vascular surgeons. This has caused dramatic deteriorations in the situation of several patients and there were several deaths. To be honest with you, the past week has been catastrophic for us medical staff; our capacity, our stocks, have been drained considering the fact that we have been besieged for the past 5 years and that medical supplies could not enter East Ghouta.

With regards to the medical staff, due to the constant bombing that has not stopped day or night for a full week, the medical staff are exhausted. We have barely slept in days; only a few hours in the past days, and of course in shifts. The majority of the staff had to stay awake and take shifts due to the high number of casualties and the continuous influx of injured. There is barely any food left for the medical staff. The aspects of daily life in East Ghouta are totally paralyzed; no markets, no shops, no places to buy food. For example, in the hospital  I’m working in, the staff takes one small meal every 24 hours. On one day, people who had found refuge in nearby shelters came to us, they hadn’t eaten in days so our staff gave them what little they could and were left with no food that day. The medical staff is exhausted and hungry, without mentioning the psychological stress; the constant and terrible sound of bombing we hear. There is no sound louder than that of bombing in all Ghouta. Also the things the staff are seeing: the dead bodies, dead children and babies, the body parts, the amputations and other terrible wounds.

Relatively, there was less shelling and it was less frequent than during the preceding days. The number of wounded was much smaller. There were only three dead in a few of the hospitals. Normally, it’s much more than that. Alike the number of wounded was much smaller than normal. There were strikes on Sunday in the morning and now, and aerial bombing of course, and as I’m talking, there are rockets falling on Ghouta.

In the two weeks from the evening of 18 February to the evening of 3 March health facilities supported by Médecins Sans Frontières reported that they had received more than 4800 people wounded and more than 1,000 people killed after heavy bombing and shelling in East Ghouta. 15 MSF supported facilities were hit by bombing and shelling, reducing the capacity of dedicated medical staff who were already exhausted after working round the clock to tend to the thousands of war wounded.

Our work in syria >>