Beirut: “The explosion did not distinguish between its victims and neither should the aid response”

What have you seen in Beirut since the port explosion?

“Lebanon has been battered by wave after wave of crisis. The explosion in Beirut has exposed needs and vulnerabilities that until now were hidden just beneath the surface. Now, in the streets of the city, you can see the visible destruction of infrastructure alongside the recently exposed needs of a population who have already experienced multiple shocks.

The people whose houses have been destroyed experienced an economic collapse just months before the explosion, pushing many of them into poverty. Some had fled war in recent years before seeking refuge in Lebanon; most have lived through the political uncertainty of the past year’s protests. And like the rest of the world, Lebanon has also experienced a pandemic that has put huge strain on the country.

This explosion was a crisis no one should be forced to absorb. For Lebanon, it is a crisis on top of a crisis that has left people angry and tired.”

Can you describe the humanitarian response so far?

“In these first weeks after the explosion, the humanitarian response to people’s emergency needs has been primarily delivered by Lebanese civil society organisations, social movements, community members and volunteers. 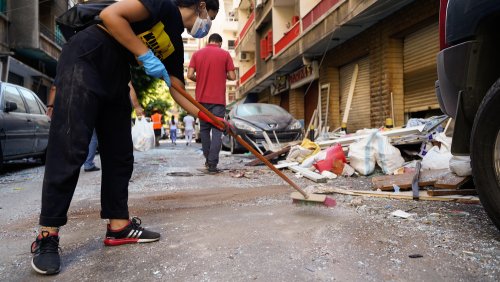 Following the explosion, people ferried the wounded to hospital in their cars. People opened their homes to those who had been made homeless.

Across the affected areas people have mobilised to provide food, clean water, essential items and emergency healthcare. Volunteers have been cleaning up the streets and patching up the wounded.

In the hours after the explosion, Beirut’s hospitals received thousands of wounded. This came at a time when hospitals were already overstretched. As the economic situation worsened and private healthcare became unaffordable, many Lebanese turned to the public health system.

In addition, many public hospitals were under strain due to COVID-19. But despite the serious challenges faced by Lebanon’s healthcare system, the first response and treatment of the wounded was carried out by incredibly dedicated health workers, some of whose hospitals had been destroyed or damaged by the blast. 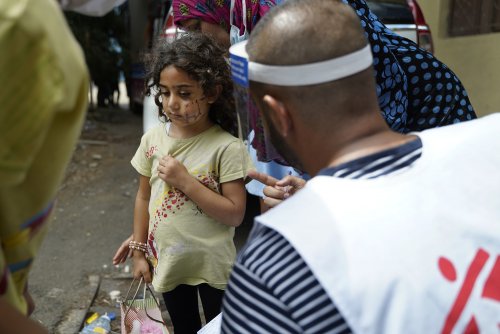 The affected communities in Beirut, and those responding to these multiple crises, have been commended for their ‘resilience’.

However, what has happened in Lebanon is a series of manmade crises from which people should not be continually expected to bounce back.States should protect people, not generate the need for endless resilience.

Following a disaster, picking up the pieces is a matter of survival. But applauding the tragedy of living in perpetual survival mode can normalise an unacceptable cycle of what some have described to me as a form of ‘state-sanctioned abuse’.

Many of those working in the response to this latest crisis have told me that they don’t want a pat on the back for being resilient; they simply don’t want to have to pick up the pieces again.”

How does MSF fit in to this response?

“MSF’s emergency response has been designed to work alongside community initiatives and to support existing responses.

We quickly realised that it was not only the injured who needed help, but also those patients on medication for chronic diseases. Many had lost or run out of their drugs, and couldn’t afford refills or could no longer access health facilities that had been damaged or destroyed. The port explosion also compounded existing traumas and mental health needs. 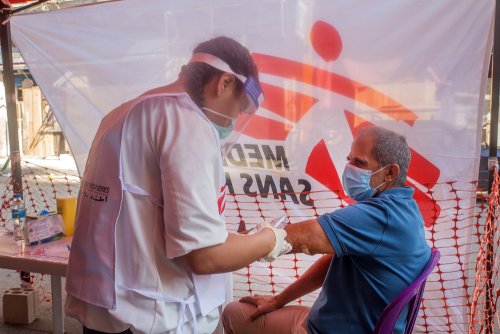 Since the start of our activities, 737 patients have been provided with wound care. 2360 patients with chronic diseases have visited our fixed points or have been visited by our home based care teams.

1645 patients have been provided with chronic disease medication as a temporary measure.

We have psychologists working from each of our medical points and carrying out home visits, while a social worker links our patients with other aid initiatives to meet their other needs.

Another important part of our response has been to give community initiatives the means to meet the needs of people who require support. For example, we continue to provide supplies of essential relief items to Egna Legna, a migrant worker-led organisation that supports migrant workers who have been particularly impacted by the economic crisis and the blast. 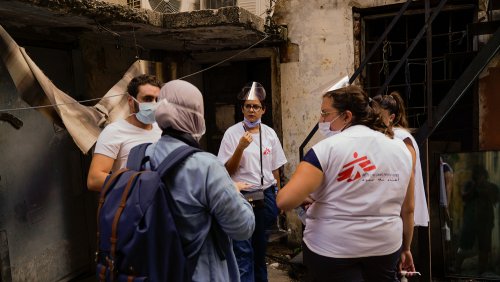 We provided them with kitchen kits that could be donated to those they identified as being in particular need.

Another way in which we will work alongside community initiatives is through the provision of training on infection prevention and control for volunteers working on the frontlines of this response. As this humanitarian response focuses on the most vulnerable, we have an additional duty to reduce people’s exposure to COVID-19 when they are receiving other forms of assistance.

What are the gaps that you are seeing?

“The traditional aid system is taking time to be fully mobilised for this response. We have seen a lot of assessments carried out, but this does not always translate into immediate action on the ground. We hear from a lot of community members that they are tired of assessment teams coming to survey their needs and then leaving.

As MSF, we tried to avoid this by providing hygiene kits while identifying which patients require chronic medication refills. In this way we avoid asking questions without already taking action. But our work is a small part of the overall relief and reconstruction effort that is needed and other organisations will need to step in as the initial responses from the community themselves comes under strain. 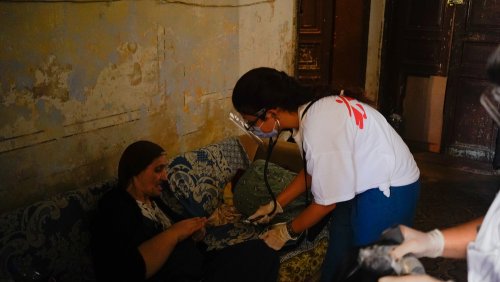 Traditionally, humanitarian aid in Lebanon has often been provided based on the nationality or legal status of the recipient.

This means that some aid is given to Syrian and Palestinian refugees, while other initiatives focus on vulnerable Lebanese communities.

This approach to aid delivery can be a hindrance to a real needs-based provision of assistance in a context of multiple concurrent crises.

In the current situation it is impossible to draw a line between the cause of people’s suffering – an economic crisis, COVID-19, war in neighbouring countries, or the port explosion – nor is it possible to divide up those who need assistance based on whether they are a refugee, a migrant or Lebanese. 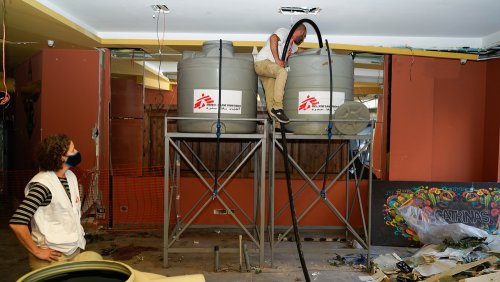 We have seen and heard of cases where people are not given assistance because they are a migrant or a refugee and vice versa.

The explosion did not distinguish between its victims and neither should the aid response.

We shouldn’t allow this separation between recipients of aid to be reinforced by the way in which aid agencies have segregated their humanitarian responses among different communities in the past 10 years.

A humanitarian response is needed that takes into consideration the overall needs caused by simultaneous crises and is sensitive to specific vulnerabilities, in order to ensure that everyone who needs assistance receives it.

How do you see MSF’s role in emergencies like this one?

As an organisation we have been in Lebanon since 1976. It was the first conflict that MSF responded to after its creation. We have motivated, dedicated and highly skilled teams that came together from different MSF projects in the country to lead this emergency response.

While MSF was putting in place the full emergency project, we saw staff from across the organisation in Lebanon mobilising and volunteering to help clear the streets of rubble in the days after the explosion.

Our response is small compared to the collective efforts of the communities themselves, and our approach has been to adapt to fill the gaps, a flexibility that is enabled by our independent funding.

We will continue to play our part as an emergency humanitarian actor alongside our longer running programmes that respond to chronic needs. But as the situation in Lebanon worsens we need to see an aid system that can mobilise in response to overall needs caused by multiple crises rather than only segments of suffering caused by this latest wave of disaster.”