December 14th, 2021- Since Brazil’s northern border with Venezuela was partially reopened back in July, an increasing number of migrants and asylum seekers have crossed the border to find themselves in the streets, with precarious access to healthcare and other basic services in Roraima state, says Médecins Sans Frontières / Doctors Without Borders (MSF).

Pacaraima, a town of 20,000 people in Roraima state, is the first place of arrival for hundreds of Venezuelans who cross the border into Brazil daily, with the hope of finding a better life and safety for them and their families. 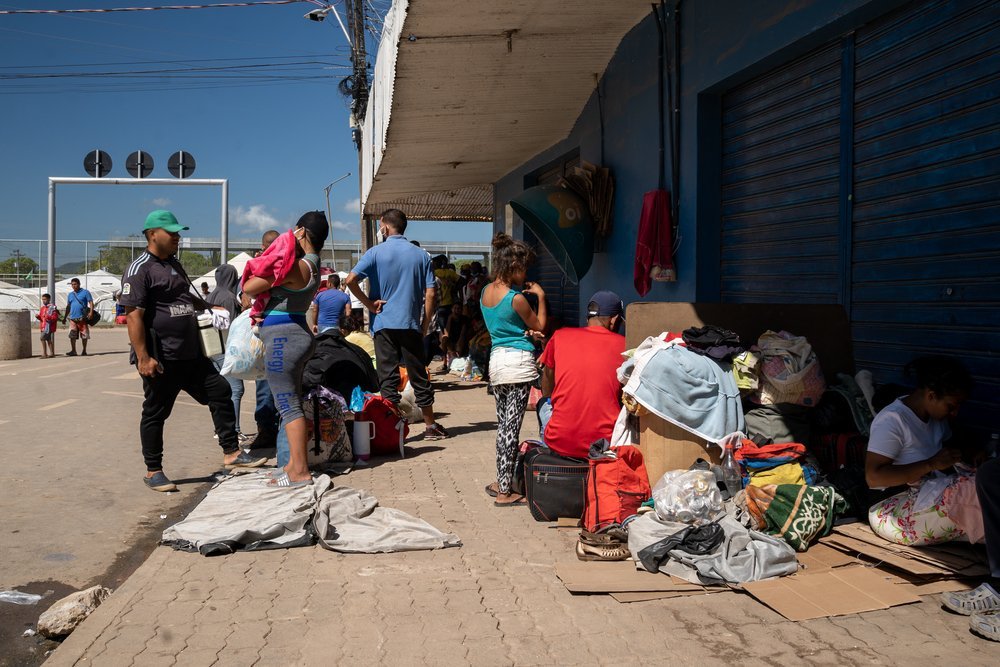 Mariana Abdalla/MSF
According to the International Organization for Migration (IOM), in November 2021, 3,213 people were living without shelter in Pacaraima. (November, 2021).

It is estimated that, each day, 500 people make the journey through improvised paths called las trochas (‘the trails’ in English), while the migration office at the small border town can only process requests for legal status for 65 people. 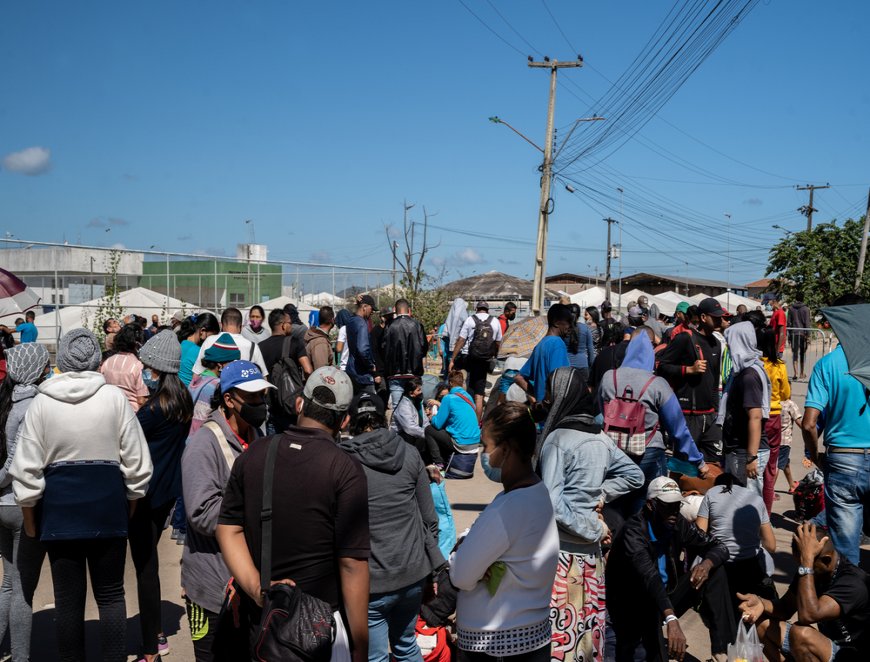 “In contrast to their hopes, most people face a harsh reality,” says Michael Parker, MSF’s project coordinator in Roraima.

“The people who arrive through the trochas usually stay in Pacaraima until they are able to clear their migration status, which can be a slow process.”

"In contrast to their hopes, most people face a harsh reality"

“The town’s health system is precarious and there is no infrastructure to accommodate the migrants,” says Parker. 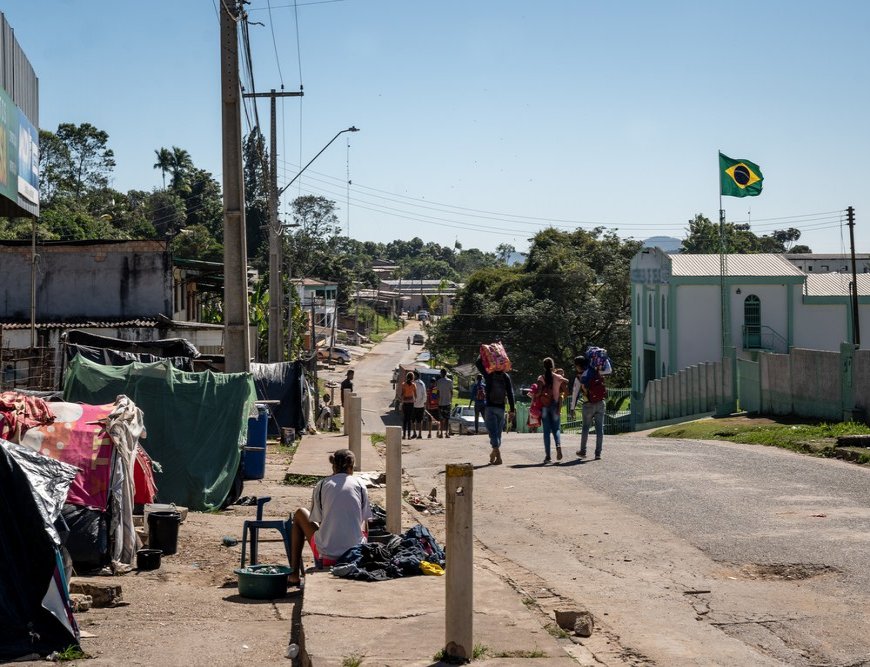 “As a result, hundreds of men, women and children live in very poor conditions with no access to basic healthcare.”

In November, according to the International Organization for Migration (IOM), more than 3,000 people were living on the streets in Pacaraima while waiting for their legal status to be cleared, due to the lack of shelters. 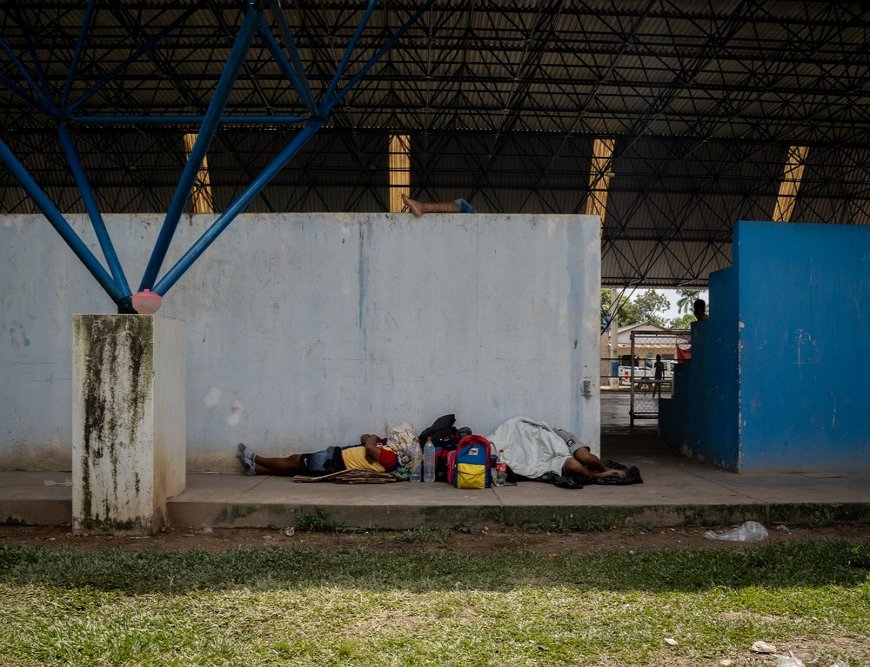 “According to Brazilian law, everyone has the right to access public health services, no matter at what stage their migration status and process is,” says Parker. 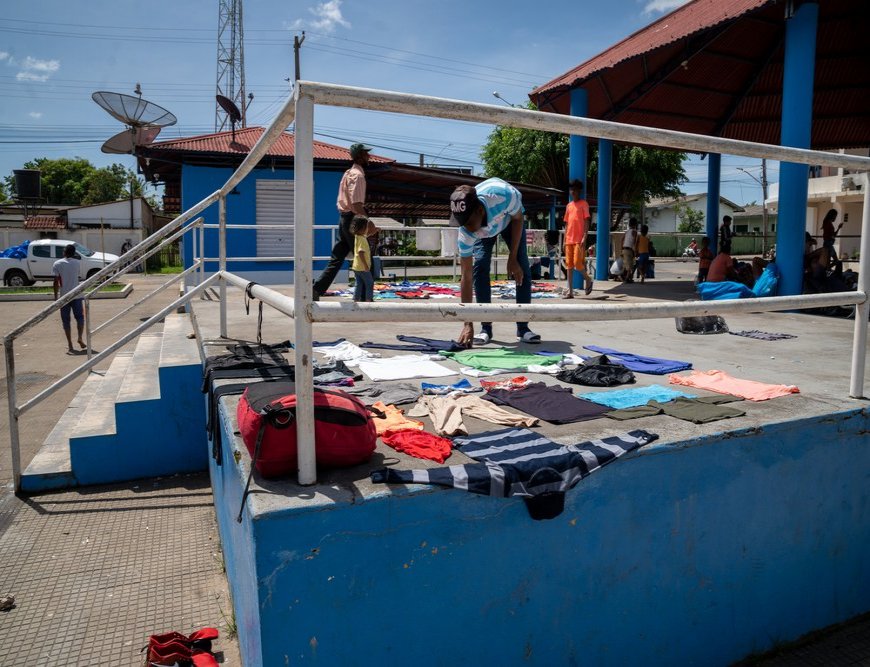 “But the reality is, that even with this formal right, the actual services are overcrowded and limited in Roraima state.” 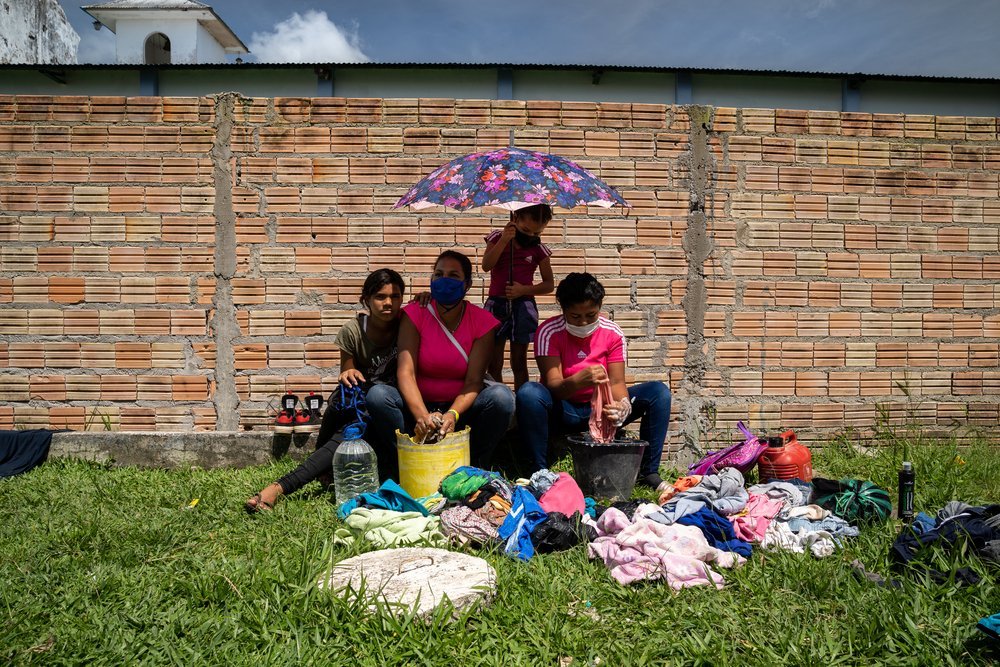 Mariana Abdalla/MSF
Vanesa and Daiviane hope to find work and a house to live in and to provide a better life for their children. (November, 2021).

In response to the gap in health services and access to information, MSF has established medical, sexual and reproductive health and mental health services through mobile clinics in Pacaraima and Boa Vista, Roraima’s state capital. 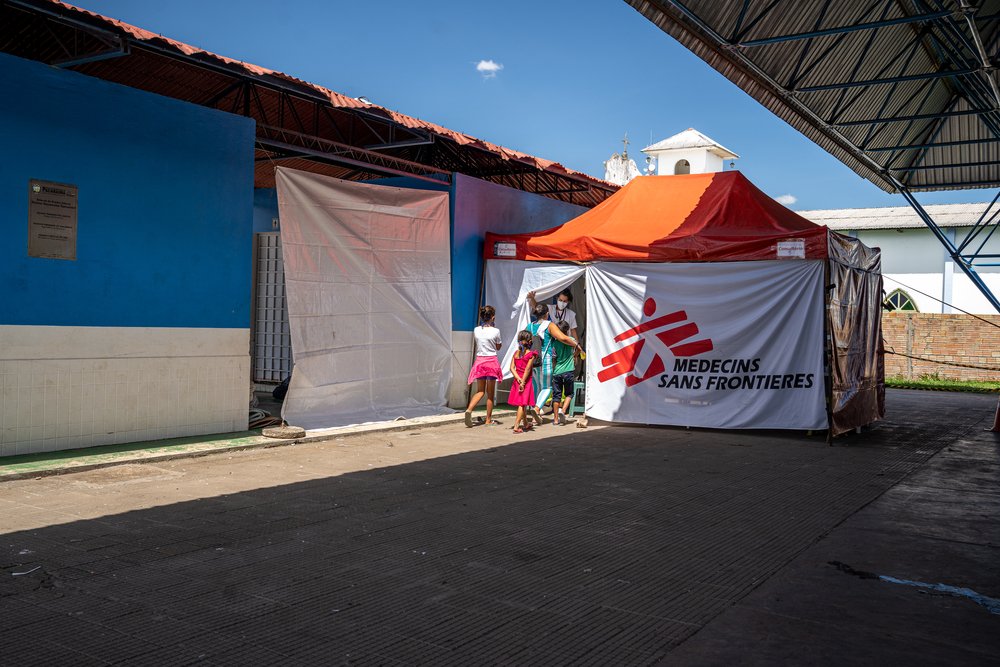 In Boa Vista, it is estimated that another 2,000 people are living without shelter, according to IOM. From January to October 2021, MSF teams provided care to 37,517 patients across all of our services in both locations.

MSF saw a clear increase in the demand for our services when the border was partially opened after COVID restrictions were lifted in July. 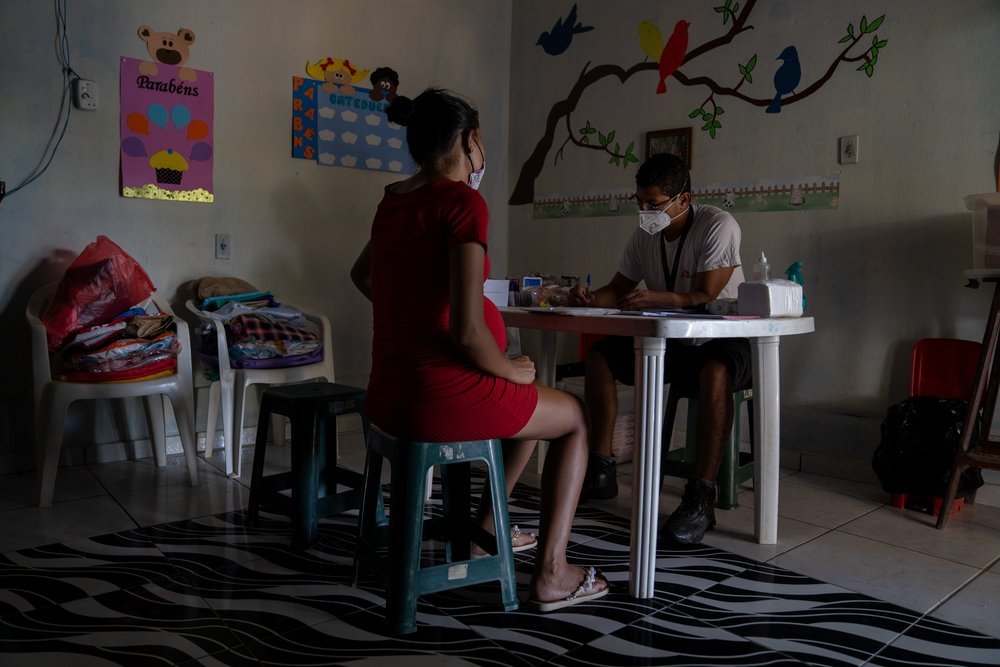 From July through to the end of September, teams cared for 14,551 patients, and 56 per cent of the total number of consultations in the first nine months of the year were done during those three months.

The main reasons for consultations were respiratory tract and gynaecological infections. 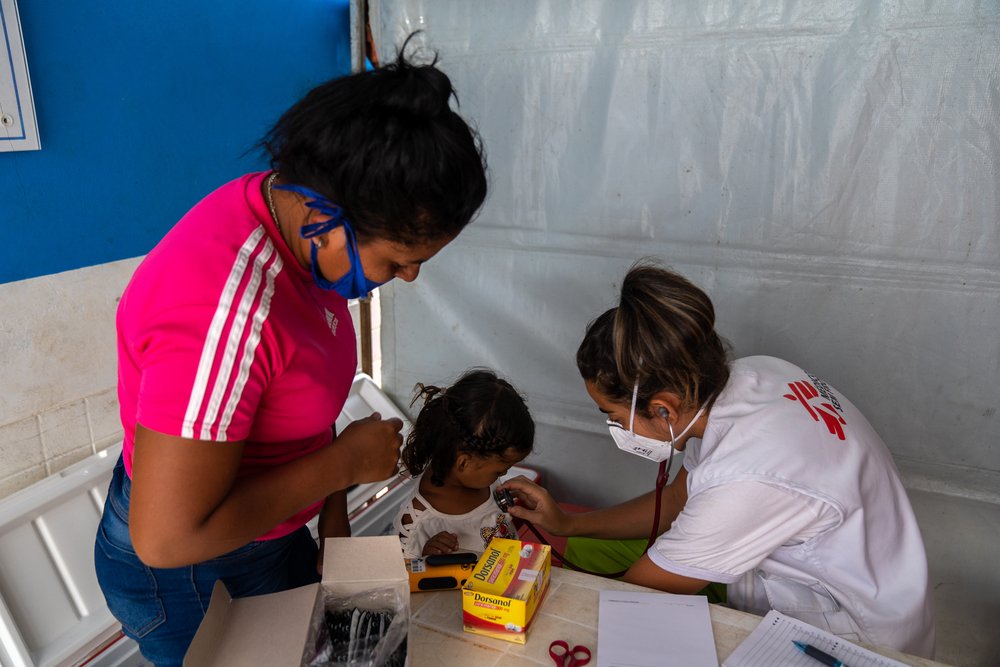 Meanwhile, the mental health team identified 69 per cent of patients had symptoms of acute stress, depression and anxiety. 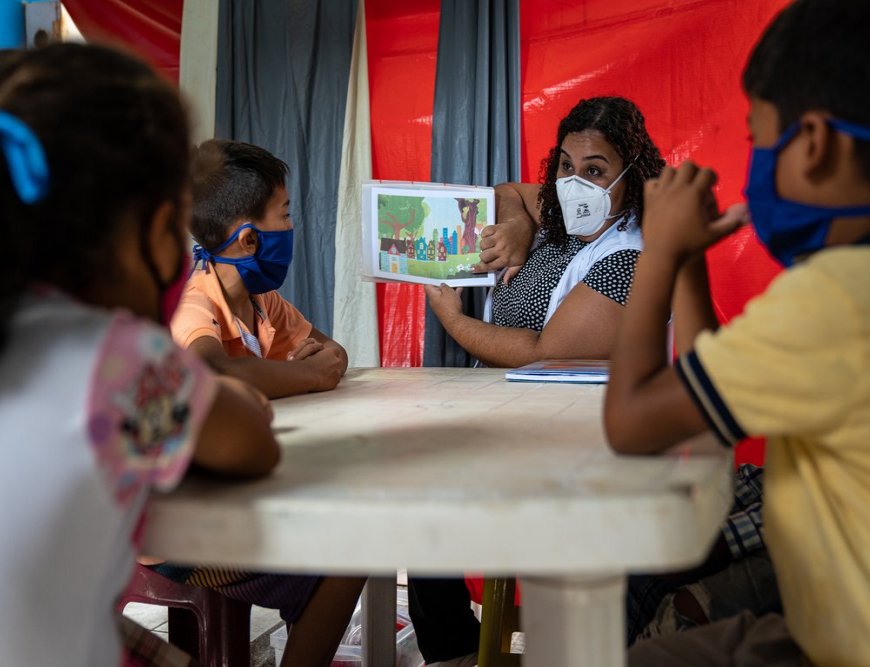 “Generally, when people arrive and see us, the main questions they have are about health services and how to access them,” said Alvilyn Bravo, MSF health promoter in Roraima project.

“They find themselves in a country with a completely different culture and face barriers, such as the language, to understand how the health services work or which are available to them.” 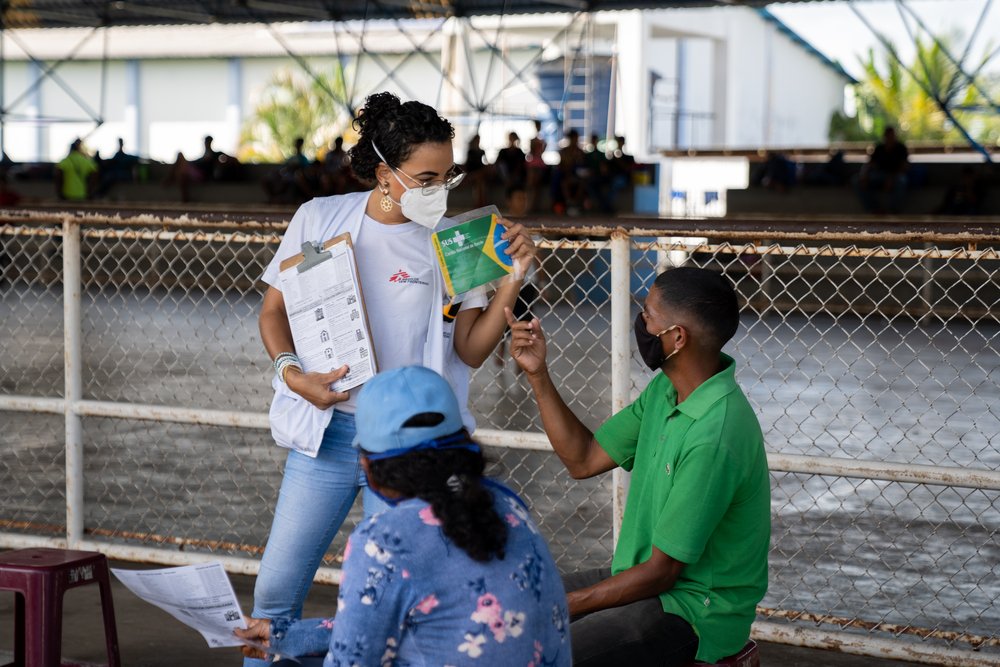 “When I arrived in Brazil two years ago, there was not as many people here as there are today,” says Alejandra*, an MSF patient.

“The services I used to access when I first arrived, such as getting a doctor’s appointment, are not available today. The only health service I have is this clinic.” 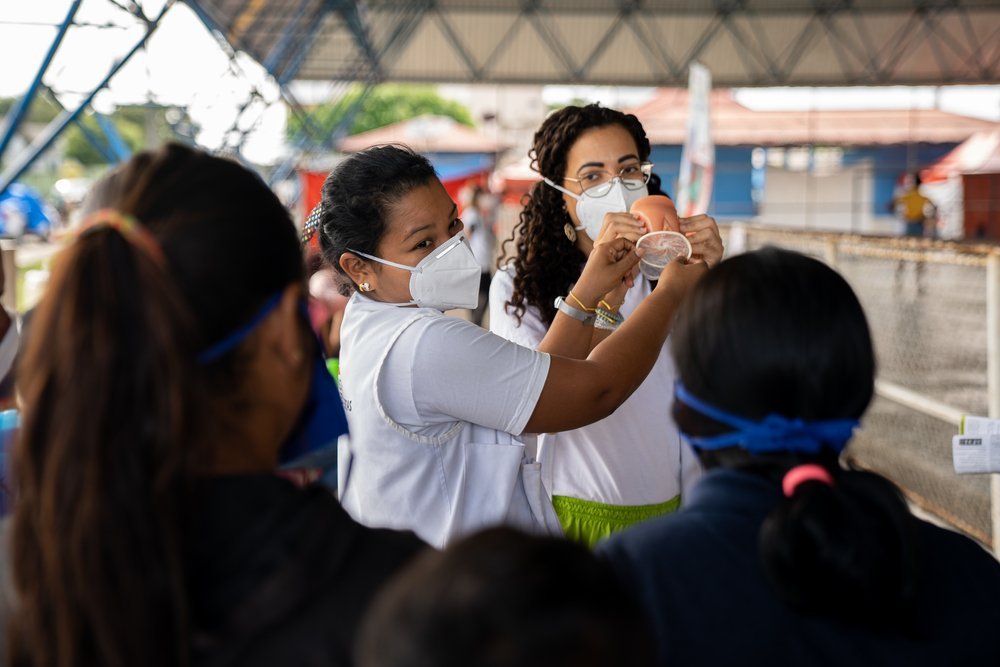 Mariana Abdalla/MSF
Mahilyn and Alvilyn, MSF health promoters, give a talk on contraception as part of our mobile clinic’s sexual and reproductive health services. (November, 2021).

“I was able to bring my daughter from Venezuela a couple of months ago,” says Alejandra.

“Her migration status is still not completed, and every time we go to see how her process is, the office is always full, the streets are full, and people just keep arriving.”

"The streets are full, and people just keep arriving." 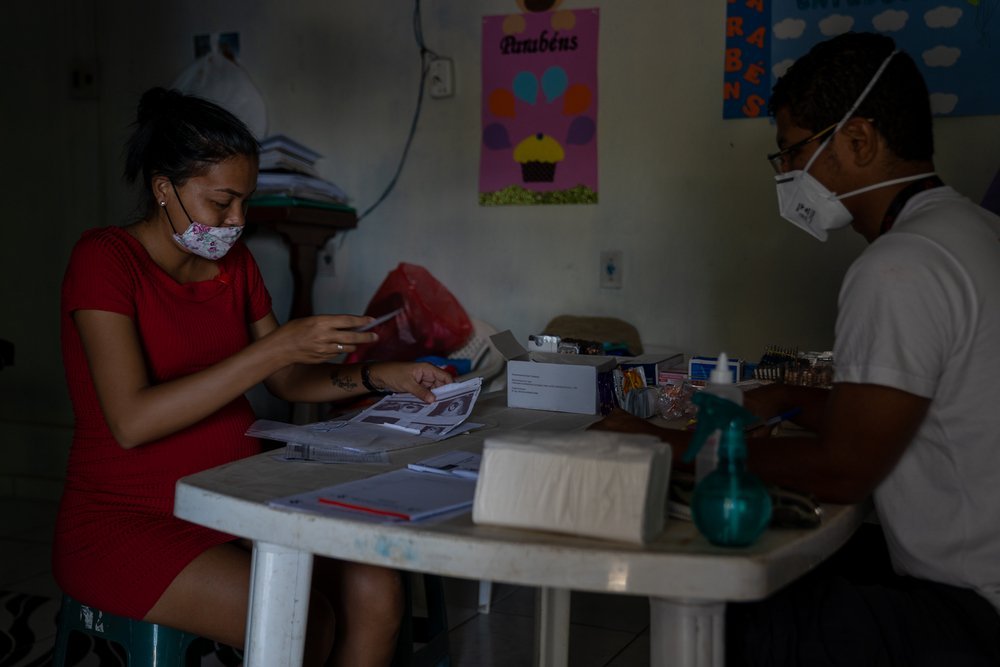 But even with the extremely precarious situation in Pacaraima, migrants and asylum seekers are almost unanimous on saying that they’d rather be homeless in Brazil than stay in Venezuela.

"When I got here, I was sleeping on the floor, on a cardboard box, but even so, it’s better than in Venezuela."

“When I got here, I was sleeping on the floor, on a cardboard box, but even so, it’s better than in Venezuela,” says Alejandra.

“We hear stories from our patients that migrating wasn’t part of their life plan, and even consider it a last resort to escape from the financial, social and food insecurity in their homeland.” says Parker. 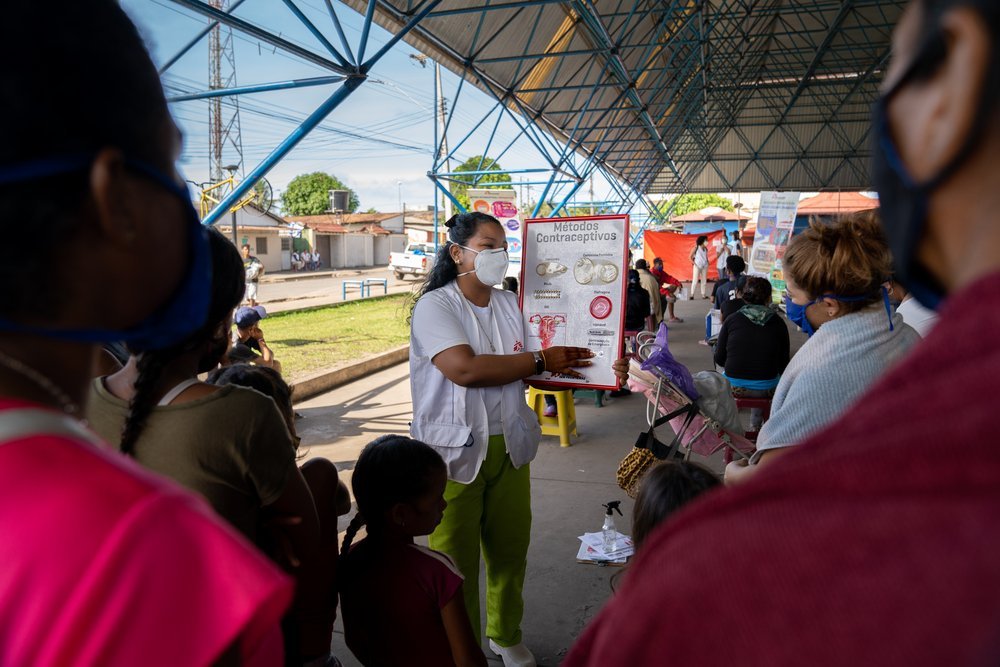 “During their journey, they face hunger and danger while trying to reach a safe and stable place. Despite the difficult context, we hear stories of hope and wishes of a better life.” 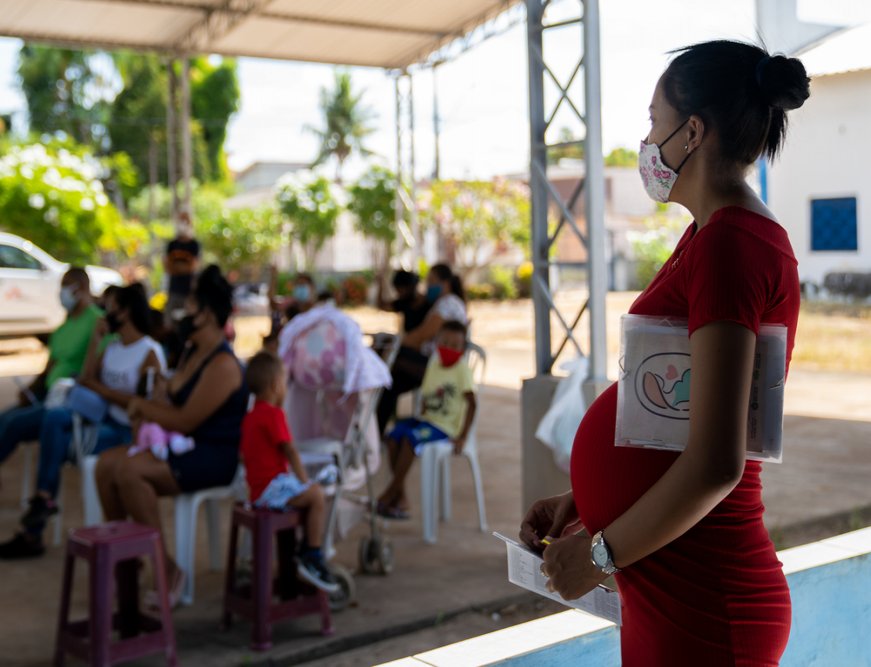 Mariana Abdalla/MSF
“The hardest thing about coming to Brazil was leaving my family and all of my things in Venezuela, but I’m doing it for my children,” said Ana.* (November, 2021).

Our teams witness families, women, children and men arriving in Brazil seeking safety and searching for a better life, every day. MSF calls for more support for health services and infrastructure, such as shelter and basic services, for migrants and asylum seekers in Pacaraima and Boa Vista.

*Name has been changed to protect patient’s identity.