Gaza, 25 January 2022 - In the MSF clinic in Khan Younis, in southern Gaza, four physiotherapists get ready for a busy day. They wear personal protective equipment and review the list of patients for the day – 46 patients in total, nearly half of them children recovering from burns. 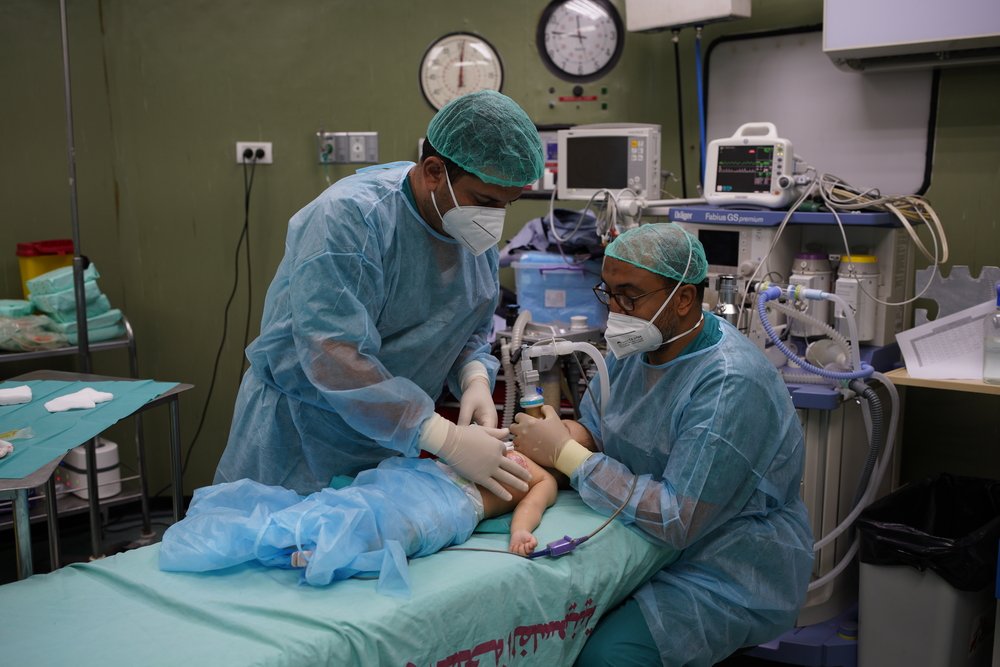 Reem Abu Lebdeh, one of the physiotherapists, removes 21-month-old Abdallah’s pressure garments and carefully examines scars on his legs, abdomen and right arm.

Ten months before, Abdallah suffered a scalding burn that damaged 50 percent of his body surface area. He spent over two months in hospital and received a skin transplant from his father. 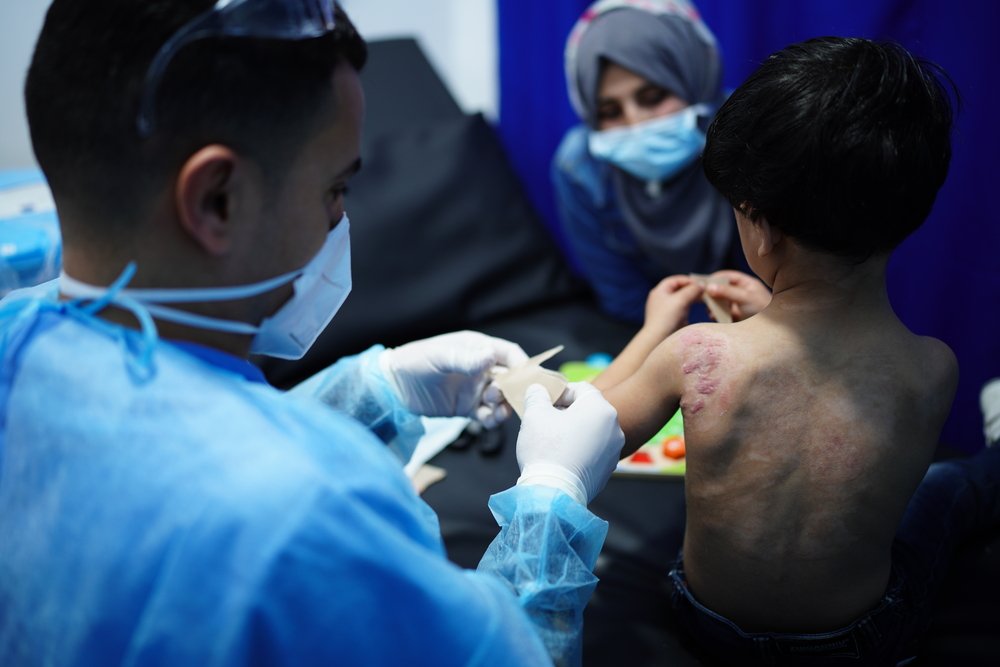 “A few more sessions and he could be discharged,” says Abu Lebdeh.

Although this is good news, it is not the end of Abdullah’s treatment. “Scars do not restrict his movement at the moment,” says Abu Lebdeh, “but this could change as he grows up." 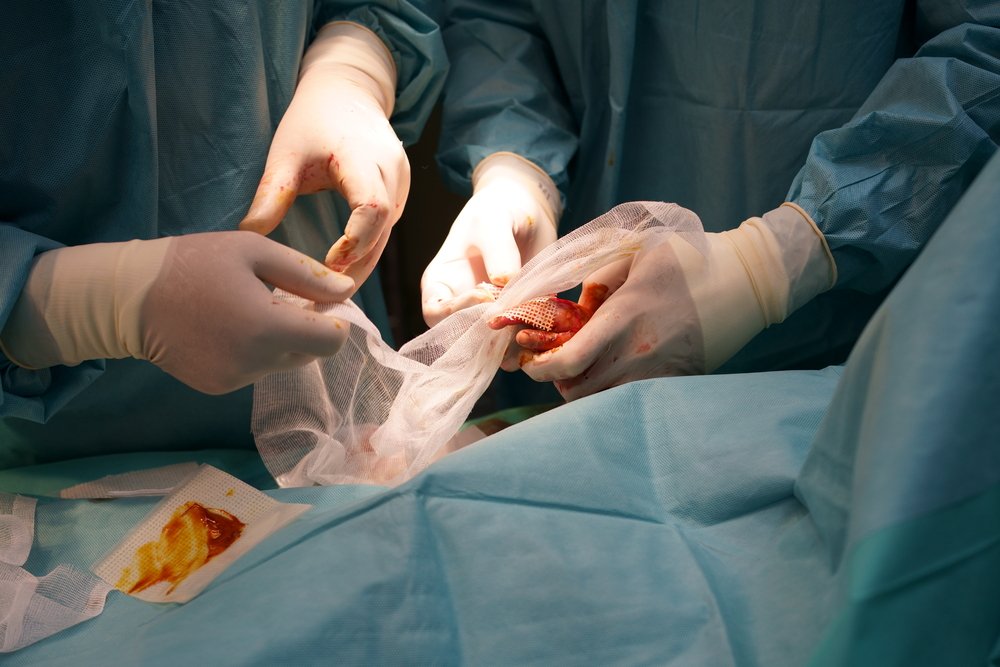 "He’ll need to keep wearing a pressure garment until his scars stop growing and he should be reassessed regularly.”

"Scars do not restrict his movement at the moment,” says Abu Lebdeh, “but this could change as he grows up"

Each year MSF clinics in Gaza treat 5,000 new burn victims, the vast majority of whom are children injured in domestic accidents.

Unsafe housing conditions are one the main causes of these incidents. 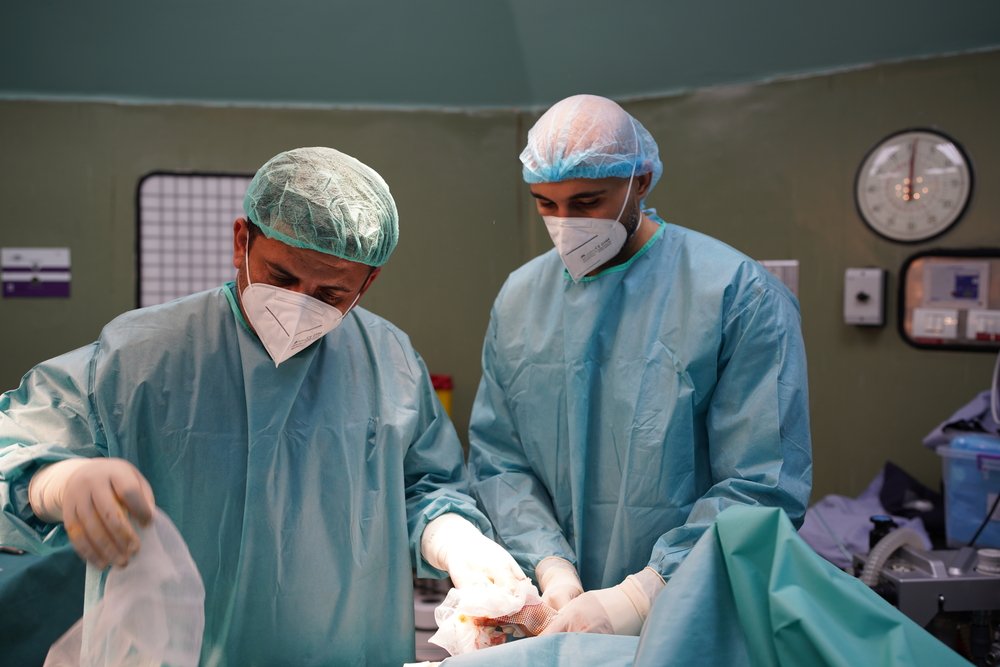 Almost 70 percent of Gaza’s population are refugees, many of whom live in refugee camps, while more than half of the population live in poverty, according to the United Nations.

As a result, large numbers of people live in overcrowded, unsafe housing, without sufficient access to electricity, heating, clean water or sanitation. 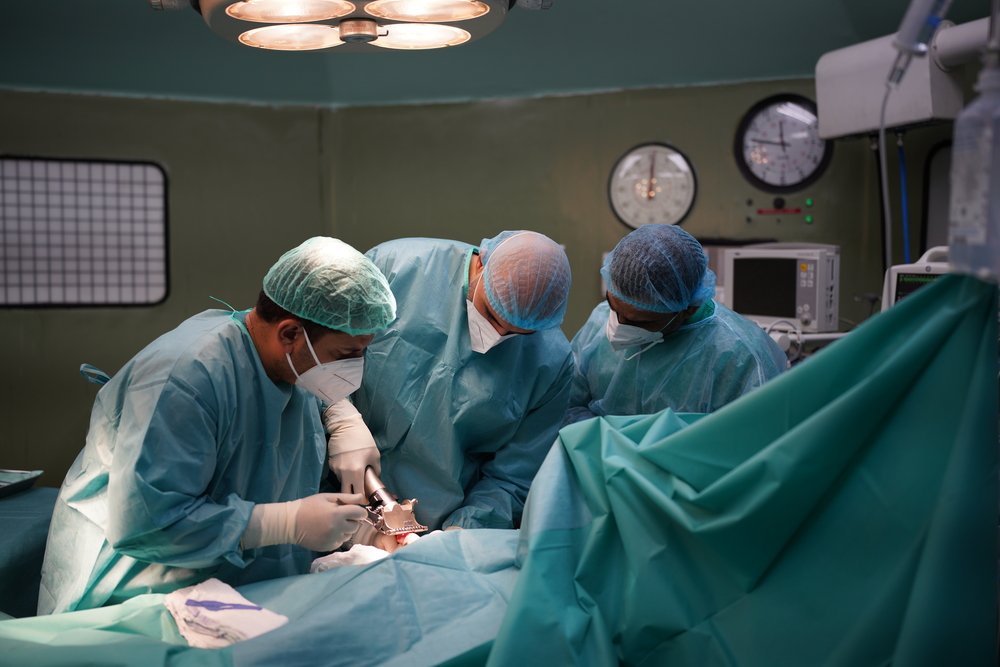 “Many burn injuries could be prevented through safer housing and through educating people about the risks,” says MSF’s burn activity manager Séverine Brunet.

A few beds away from Abdallah, on the opposite side of the room, is Sham, a two-year-old girl whose burn wound was also the result of an accident at home.

Physiotherapist Noura Alzaeem is giving her a scar massage.

Sham’s family of four lives in a rented room in Khan Younis refugee camp – a small space that only has room for a bed, a mattress and two cupboards. 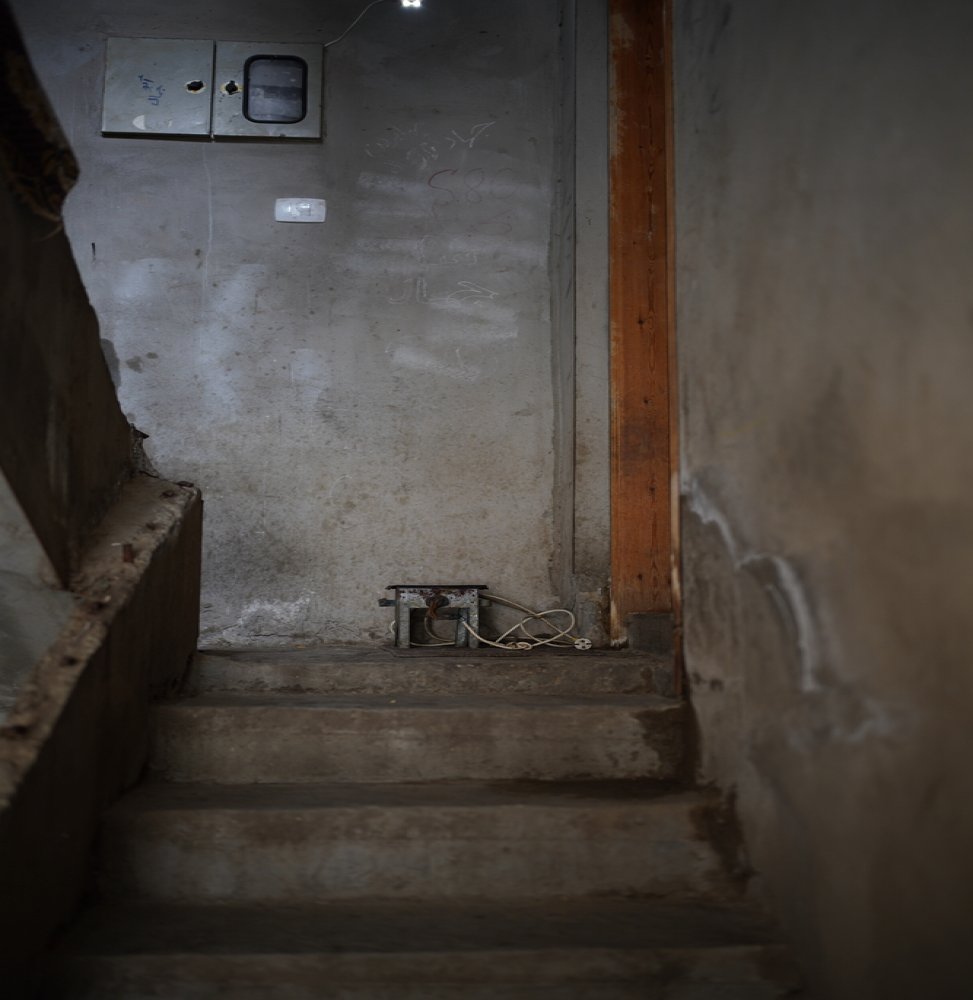 Tetiana Gaviuk/MSF
A room that family of four rents in this house is too small and can only fit a bed, a mattress and few pieces of furniture. Two children in this household suffered from serious burns that occurred during cooking. (December, 2021).

With no kitchen, Sham’s mother cooks on the floor of the landing outside the room.

Caught up in wires

One day, Sham got caught up in the wires of the electric stove while her mother was cooking.

She fell and the hot stove fell on top of her, burning 10 percent of her body. 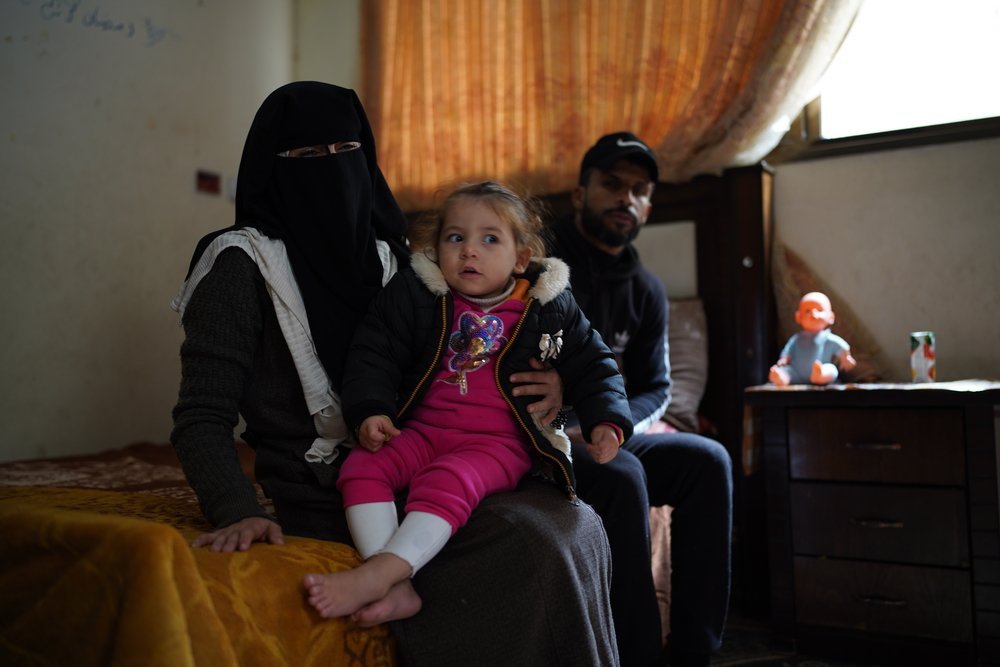 Tetiana Gaviuk/MSF
A two-year-old Sham sits with her parents in a rented room in Khan Younis refugee camp in the south of Gaza. (December, 2021).

Three years ago, Sham’s older brother Jamal, then aged two, also suffered a burn injury after he rolled off his bed onto a stove, burning his face.

He was treated in an MSF clinic for eight months, says his mother. 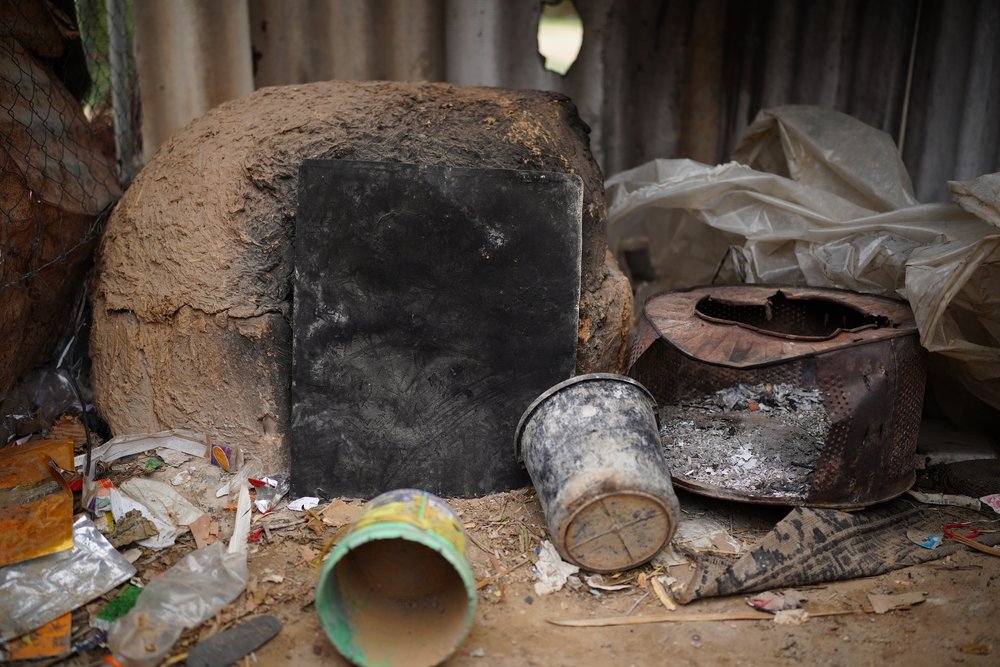 Tetiana Gaviuk/MSF
A cooking space where a four-year-old Nabeel accidently burned his back while his grandmother Sana was baking bread. (December, 2021).

Like Abdallah and Sham, many were injured in domestic accidents caused by poor housing conditions.

Correct treatment in the first 48 hours is critical for the recovery of burn patients, but most burn victims and their families are unfamiliar with first aid for burn injuries.

Toothpaste, coffee powder and tomato sauce are some of the most common home remedies, while some people resort to applying bleach or salt to the burn. 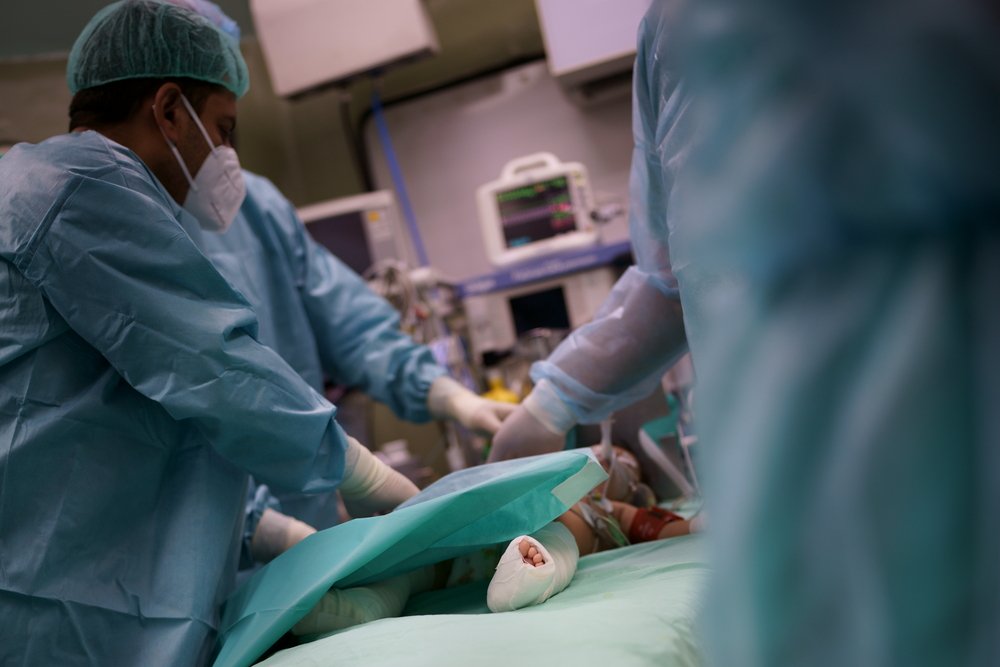 Tetiana Gaviuk/MSF
Al-Shifa’s burn unit is the main referral unit for all hospitals in Gaza where on average 270 patients are treated annually. (December, 2021).

“The first thing to do is hold the burned area under cool running water,” says Brunet, “and if the injury is serious, you should seek medical treatment as soon as possible.”

Reaching hospital can also be a challenge.

"An hour to reach hospital on a horse-drawn cart"

When four-year-old Nabeel accidently leant back against a hot oven in which his grandmother Sana was baking bread, his lower back was severely burnt.

Unable to afford a taxi, it took them an hour to reach hospital on a horse-drawn cart.

To have the best chance of recovery, patients with severe burns need frequent dressing changes, physiotherapy and follow-up treatment, but many end up skipping their appointments as transport costs mount. 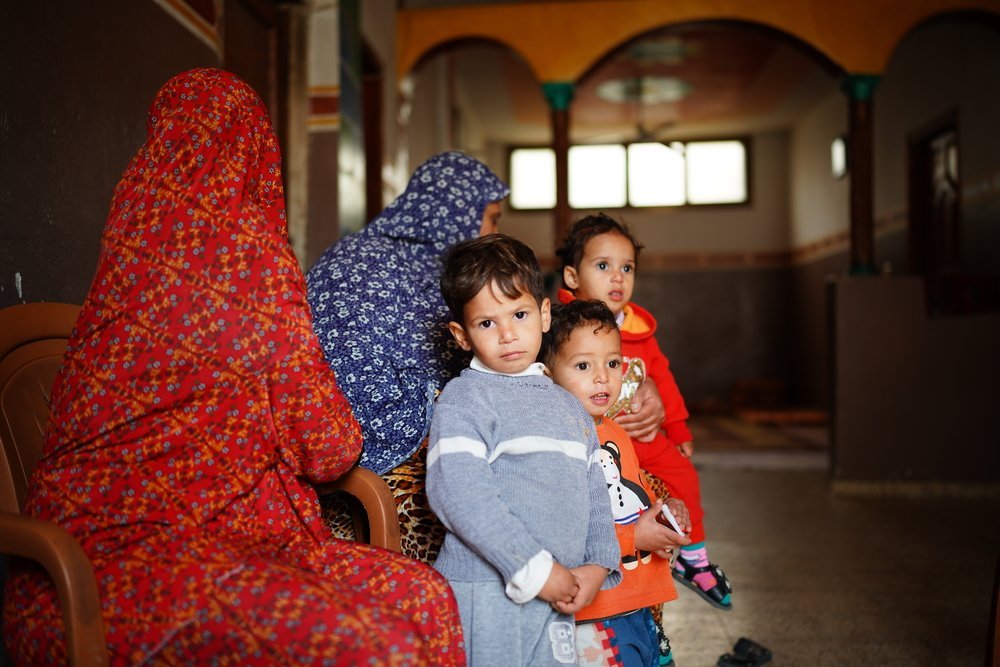 Tetiana Gaviuk/MSF
Nabeel accidently burned his back while his grandmother Sana was baking bread. It took them an hour to reach a hospital by horsecar as Nabeel’s family could not afford to hire a taxi. (December, 2021).

MSF provides transport to and from its clinic in Gaza to avoid this problem.

“Sticking to a treatment plan is very important, but it is very challenging for our patients in Gaza,” says Brunet.

“In addition, poor hygiene due to inadequate access to clean water and sanitation increases the risk of infection and antibiotic resistance, which is prevalent in Gaza." 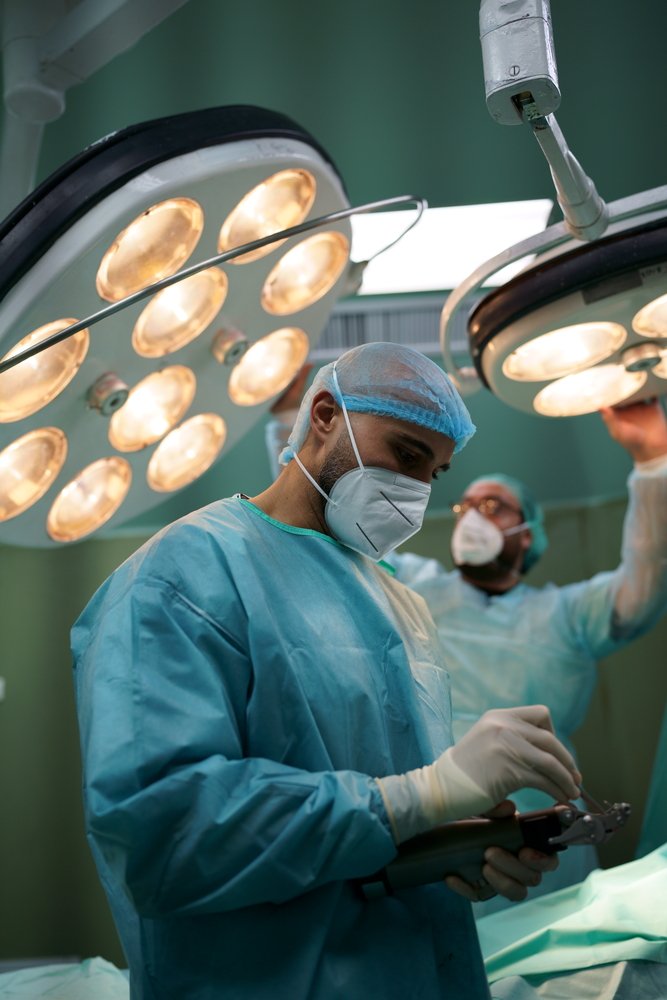 Tetiana Gaviuk/MSF
The doctor cleans a debridement device after a procedure at Al-Shifa’s burn unit, in Gaza city. (December, 2021).

"Many patients also lack access to good nutrition or have co-morbidities that slow their healing process.”

Burn injuries can have a long-lasting impact on one’s physical and psychological health, while treatment can require prolonged hospitalisation and months of follow-up care to avoid disfigurement and disability – care that Gaza’s healthcare system, paralysed by Israel and Egypt’s blockade, cannot offer.

To improve access to quality care for victims of burns, MSF provides wound and pain management, physiotherapy and psychosocial support to burn victims and their caregivers through four clinics in the Gaza Strip and supports the burns unit at Al-Shifa hospital – the main referral unit for all hospitals in Gaza – where an average of 270 patients are treated annually for burns. 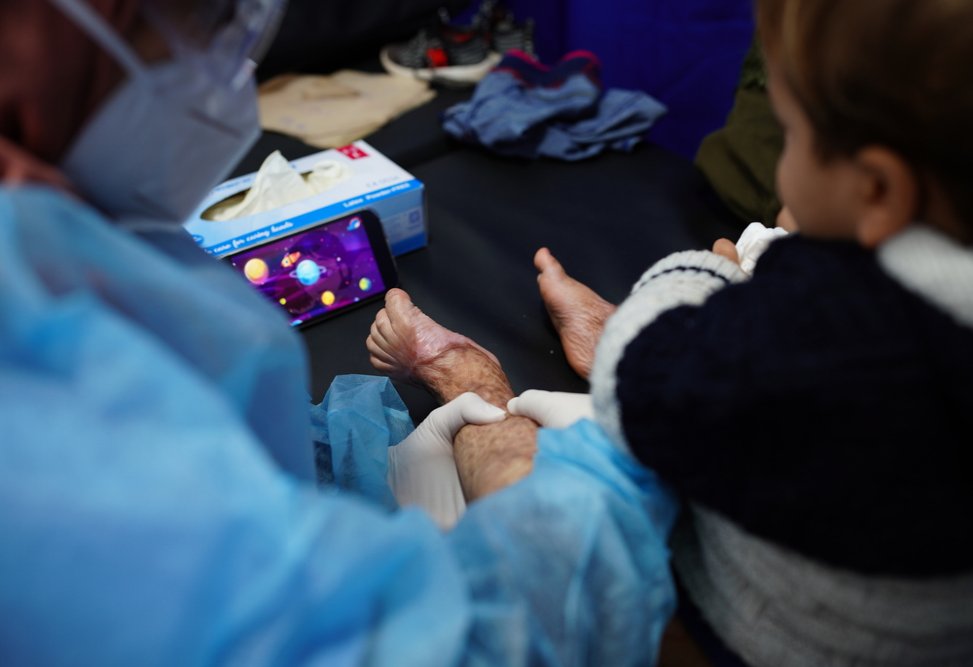 However, as long as people continue to live in inadequate and overcrowded housing, the burden of burn injuries will continue to weigh on Gaza.

MSF has treated burn patients in Gaza since 2011. In 2020, when the COVID-19 pandemic made it difficult to send burn patients for treatment outside Gaza, MSF began providing compressive masks for facial burn victims with 3D scanning and printing technology manufactured inside Gaza for the first time.

"Many patients also lack access to good nutrition or have co-morbidities that slow their healing process.”

In 2021, MSF opened the first sedation room in Gaza where children with severe burns can have their dressings changed and receive physical therapy under anaesthesia without going to the operating theatre. To have the best chance of recovery, patients with severe burns need frequent dressing changes, physiotherapy and follow-up treatment, but many end up skipping their appointments as transport costs mount.